Worshipping at the Church of Stop Shopping.

The Church of Stop Shopping? The name might ring a bell. During last year’s pre-Christmas shopping season, this parody gospel choir roamed the country, stopping in places like Mall of America to offer carols rewritten to warn of the evils of consumerism. The music-and-comedy troupe was founded by “Rev. Billy” (Bill Talen), who preaches the Stop Shopping gospel (“We’re on a mission to save Christmas from overconsumption”) while costumed and coiffed to resemble the most terrifying wide-eyed faith healer on TV. (Actually, the Anglican-style clergy collar doesn’t go with this character, nor the pre-Vatican II Catholic confessional, but we’re not asking for historic accuracy here.)

What Would Jesus Buy? is a documentary about that cross-country pilgrimage, and it’s a top-notch production. There’s been a welcome revival of the documentary genre in recent years, and spelling bees, flocks of birds, and child photographers in India have all been subjects of box-office favorites. What Would Jesus Buy? is as interesting and well-made as the best of them. Like all good documentaries, it starts with an intriguing phenomenon and presents it with verve. Before I saw it, I was worried that the troupe might exploit Jesus for comic purposes, for example by offering mock prayers. That worry turned out to be groundless. The Church employs the choir-and-preacher format to comic effect, but nimbly avoids religious belief itself.

Yet there’s a problem with this film. It’s a dramatic problem, rather than a problem with the message. Personally, I’m enthusiastic about the message. I was anti-consumerism when these folks were still in the Stop Shopping Children’s Choir. Twenty years ago, my husband and I were teaching our kids to analyze TV commercials looking for the lie: “See if you can figure out how it’s trying to trick you.” We didn’t have Santa in our house (and I still get hate mail about my Beliefnet essay on this). Instead, each child told us what he wanted, within a budget of $100 (they’d get a few small surprises as well). We were pretty poor then — my husband is a “Rev,” too — but we did it mostly for the principle of the thing: Christmas is not for sale.

This philosophy didn’t stop on December 26. Most of what we own today is second-hand. On purpose. You might wonder why National Review Online would allow someone with such outré views to review movies, but recall that this is the birthplace of Crunchy Conservatism, and I was crunchy before crunchy was cool. Next time someone tries to tell you that conservatives are narrow-minded and intolerant, point to the lady with the hyphenated name and the thrift-shop pocketbook.

No, the problem is that this gospel-preacher format inherently makes onlookers wary. Shouting born-again folks have a scary reputation, and during impromptu performances we can see onlookers keeping a careful, unsmiling distance. (Perhaps Talen assumed that ordinary Americans are drawn to street preachers. They aren’t.) The dramatic flaw is that it looks like the Church’s message is not getting across. Other documentaries gratify us by showing kids winning a ballroom-dance competition, or penguins birthing a new generation. But in the whole 90 minutes of What Would Jesus Buy? we never see a person change their views or behavior as a result of hearing the Stop Shopping message.

“Rev Billy” Talen may suspect that something isn’t working right, because most of the time he looks uneasy. The choir, by contrast, is relaxed and happy (as well as terrifically talented), but both Talen and his wife, “Church Director” Savitri D, look concerned. That’s contagious, and it’s a downer.

It seems to me that when “Rev. Billy” is delivering scripted lines he looks stiff, and when delivering ad-lib remarks he looks panicky. Panic is reasonable, because it’s hard to do spontaneous televangelist parody and make even comic sense — yet the role nevertheless requires great conviction at high volume. This is a combination designed to end in misery. After a protest at Wal-Mart headquarters, Talen collapses onto a motel bed saying “That was terrible.” Somehow he’d found himself loudly repeating, “We have millions of Americans inside our bodies!” Savitri D comments, “I don’t know if anyone hears us…I need for what we do to have some impact on someone — soon.”

Maybe the problem is uncertainty about who they’re trying to impact: ordinary shoppers, or the cognoscenti who like to laugh at ordinary shoppers? One of the cheerful choir members says she’s delighted “to be doing serious political work in creative, fun ways,” and perhaps that word, “political,” underlies the confusion. Thinking of your work as “political” is thrilling and energizing, but consumerism is more a matter of cultural than political change. It’s an issue that calls for consciousness-raising, as we fogeys used to say. There’s a temptation to view every good cause as a “fight,” and when Stop Shoppers come out fighting, the tired shoppers in the malls can only assume they’re being fought.

Even those who listen sympathetically can find the message confusing. The very question, “What would Jesus buy?,” is too unfocused to answer, though several sympathetic talking heads try. The lyrics of some of the choir’s songs (penned by Talen) are posted on their website, but Talen is the kind of lyricist who prefers suggestion to clarity, and what he’s trying to suggest often escapes me.

For example, the “Beatitudes of Buylessness” begin: “Blessed are the Consumers, for you shall be free from Living By Products; Blessed are you who stumble out of branded Main Streets, for you shall find lovers not downloaded and oceans not rising; Blessed is the ordinary citizen who holds onto a patch of public commons, for you are the New World;” and so on. I probably agree, but I’m not exactly sure what he’s getting at. Some of the Beatitudes offer blessings (rather than woes, as in Jesus’ original) for consumers, advertisers, and celebrities. These folks are blessed because they’re going to change their minds–an unsupported assumption so broad that the whole project begins to look like an exercise in wishful thinking. By the time the lyrics got to “Blessed are the young women in sweatshops, for the things you make will fly you like magic evening gowns to the City of Light,” my willing suspension of disbelief had lost its suspenders.


The Stop Shoppers readily admit that changing our lives is complicated, and when asked to suggest alternatives the tough “political” stance (blessedly) vanishes. They agree that it’s not feasible to literally “stop shopping.” They say they’re asking people to think about their shopping habits and make some different choices: a choir member says, “Explore the options, that’s all we ask.” Rev. Billy admits, “We’re trying to slow down our own shopping,” and there’s a funny scene where choir members, browsing in a truck stop while the buses refuel, are tempted to buy cheap souvenirs of the trip.

Rev. Billy does have some concrete suggestions: he recommends that at Christmas we “Spend half as much, give twice as much” by making gifts of time and attention, or of something homemade. “We will take the real life that we have within us, that originality that we’ve got, that has nothing to do with products!”

This might sound a bit strange-bedfellows; the exhortation to simplify Christmas, to buy less and make home-made gifts, can be found in virtually every Christian magazine around this time of year. Likewise, Rev. Billy’s admonition to buy American, to check labels, check packaging, and reject anything made overseas, was once a mark of right-wing patriotism. Now the spur is anti-globalism, and though I’m sympathetic to the Stop Shoppers’ analysis, I’m not convinced of their solution. I worry that, if I boycott foreign goods, the lives of those impoverished workers just get harder. The whole situation is so vast and interdependent that it is bewildering.

How can we persuade people to resist consumerism? The Stop Shoppers and my family can live the change we’re seeking, but the most persuasive bucks and billboards will always be on the other side. We can choose to resist fashion, but that guarantees our cause will never look fashionable. We can refuse to buy stuff marketed to inspire envy, but can’t be surprised if we don’t inspire emulation either. It’s a confounding situation. As Rev. Billy says, “We don’t have the answer. But I think we have the question.” That’s about right, and I’m glad the Church of Stop Shopping is trying to get the conversation going.

— Frederica Mathewes-Green writes regularly for NPR’s Morning Edition, Beliefnet.com, Christianity Today, and other publications. She is the author of Gender: Men, Women, Sex and Feminism, among other books. 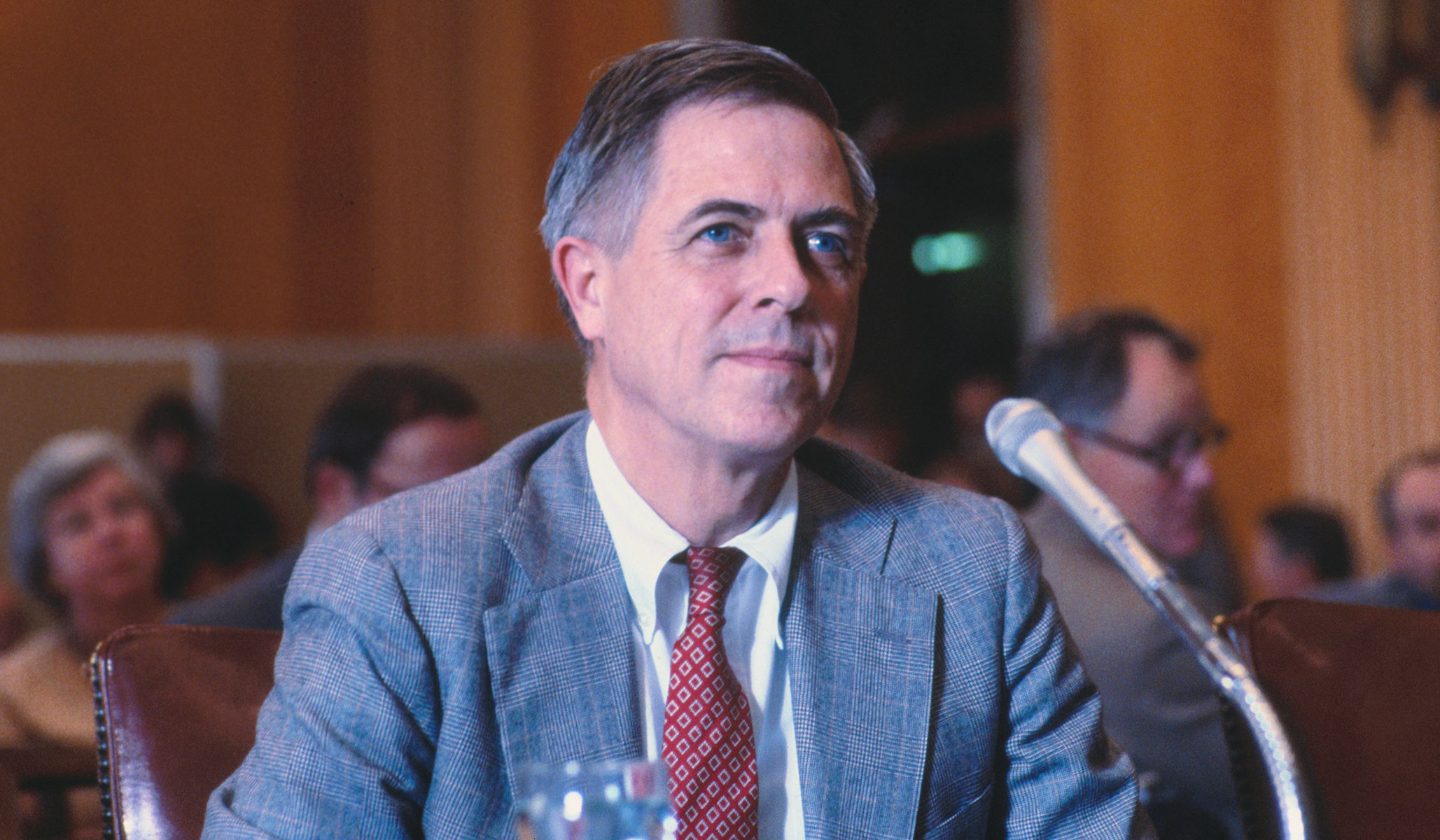 He didn’t know when it would be overturned, and neither do we. But the day will come. This year, God willing.
Jack Fowler

Students who don't wear masks indoors or on the school bus ‘will be precluded access to face-to-face instructional programming until they comply.’
Brittany Bernstein

Marchers for Life Vow to Continue Fight Even If Roe Overturned: ‘Abortion Won’t Go Away’

Given the conservative majority on the Supreme Court, many protestors were filled with optimism.
Caroline Downey

The Editors
They burned political capital to question the legitimacy of the next elections and lay the foundation for an assault on our traditions of governance.