AOC Lashes Out at Fellow Dems over Inaction on Eviction Moratorium: ‘Cowards’

What Americans, and President Obama, can learn from the Great Migration South.

I’m a Jersey boy. I was born there, went to high school and college there, and assumed I’d spend the rest of my life there. But though I loved the people and food, the Jersey Shore summers, and short rides through the Lincoln Tunnel to Broadway shows and Madison Square Garden, I gave it all up and moved south. Very far south. I’m not alone.

According to the latest Census figures, and stories in USA Today, the Associated Press, and elsewhere, the South was the fastest growing region in America over the last decade, up 14 percent. “The center of population has moved south in the most extreme way we’ve even seen in history,” Robert Groves, director of the Census Bureau, said a few months ago.

That migration wasn’t limited to white Yankees like me. The nation’s African American population grew 1.7 million over the last decade — and 75 percent of that growth occurred in the South, according to William Frey, a demographer at the Brookings Institution. What those stories and studies failed to report were the reasons propelling that migration. The economic and cultural forces driving this migration south have been ignored by the press. And by the Obama administration

So I figured this Jersey boy who now calls Oxford, Mississippi, home could explain why. This Yankee turned good ol’ boy could explain the pull — no, the tug — of the South.

“Have you lost your mind?” is the refrain I heard over and over from friends up north when I told them the news. It was as if I’d just told them I was moving to Madagascar.

I then told them about the quality of life in Oxford, and how far a dollar stretches. And the ease of doing business. When I show them pictures of my house, and get around to my property taxes, things get positively somber. On a home valued at $400,000, my tax tab is $2,000. My parents in New Jersey pay $12,000. And for a whole lot less house. On no land. When I remind friends about the pension liabilities they’ll be inheriting from the state unions, things get downright gloomy.

I then explain that my work is mostly done by the phone or internet. So where I live has little bearing on how much I earn. But it has a whole lot to do with how much I keep.

Having disposed of the economic arguments, I knew that one big question lurked: “Okay, Lee, but what’s it like living with a bunch of slow-talking, gun-toting, Bible-thumping racists?”

My friends didn’t use those exact words, but I knew it’s what they were thinking. I knew because I thought the same thing about the South before I moved here. Most of what we Yankees know about the South comes from TV and movies. Think Hee-Haw meets Mississippi Burning meets The Help and you get the picture.

But my own prejudices bore little resemblance to the reality I encountered when I moved south. I fell in love with the place. With the pace of life, for openers. Things got done, and done well, but it always seemed as if people had time for one another.

Though I’d never owned a firearm, I learned that the locals took personal protection into their own hands, knowing that a call to a county sheriff wasn’t a solid defense strategy. I also learned how much fun it was to shoot stuff, from targets to tin cans to turkeys.

The Bible thumpers proved to be more caricature than anything. The people I met didn’t impose their religion on me. They tried to live by the standards of their faith. Sometimes they did; sometimes they didn’t. But the pervasive pursuit of those standards made the South a better place to live.

It was on the race front that I was most surprised. Yes, the South had a painful and tragic history. And yes, I encountered bigots who didn’t worry about using the “n” word, and wished for a return to the 50s — the 1850s. But they proved to be the exception.

Instead, I saw blacks and whites interacting in day-to-day life in ways I never saw up north. Indeed, in the suburban town where I grew up in New Jersey, I could count the African American residents on one hand. But in my small Southern town, my daughter’s first-grade class is thoroughly integrated — 25 percent of her class is African American.

Like me, businesses around the world liked what they saw in the South, too. Companies like Boeing, Nissan, BMW, and Toyota could have chosen anywhere in the world to locate their most modern plants, but chose to locate them in the South.

Where there are plants and jobs, people move. And Americans have been moving south from the rust belt and industrial North for decades. In 1960, Detroit had a population of 1,850,000. Today, it has 720,000. Houston is now larger than Detroit, Atlanta is larger than Boston, and Dallas is larger than San Francisco.

Those numbers reflect a shift in political power. Texas picked up four seats in the House of Representatives this past year, while Ohio and New York lost two. Georgia and South Carolina picked up a seat, while New Jersey and Michigan lost one.

What caused this migration of capital — the human, industrial, and political varieties? Ask transplanted business owners and they’ll tell you they like investing in states where union bosses and trial lawyers don’t run the show, and where tax burdens are low. They also want a work force that is affordable and well-trained. And that doesn’t see them as the enemy.

It’s quite a story, actually. Americans, black and white alike, are moving in record numbers to a part of the country where taxes are low, unions are irrelevant, and people love their guns and their faith. And yet we have heard hardly a peep about this great migration from our nation’s public intellectuals.

Why? Because their ideological prejudices won’t permit them to admit the obvious. They’d prefer to focus their research on the pre-1970s South because they are more comfortable with — and more invested in — that old narrative, while this new one marches on right under their noses. And their keyboards.

And so it is with a sense of puzzlement that this Jersey boy turned Mississippian watches the decision making of President Obama. Millions of Americans may have voted for him in 2008, but millions have been voting with their feet, and he doesn’t seem the least bit interested in understanding why.

Last December, gun manufacturer Winchester moved one of its plants — and 1,000 jobs — from East Alton, Ill., to my small town of Oxford. Joseph Rupp, who runs the company, explained: “While I am disappointed that employees represented by the International Association of Machinists chose to reject a proposal that would have allowed us to remain competitive in East Alton, we look forward to expanding our existing operations in Mississippi.”

For a town of Oxford’s size — about 12,000 people — this was cause for celebration. For East Alton, which has 7,000 residents, it was a catastrophe.

And I wondered as I read that story, “Does anyone on President Obama’s staff read the business section of the paper?” He should be studying the Winchester story, and why those jobs fled his home state of Illinois. He should be talking to Richard Fisher, the president of the Federal Reserve Bank of Dallas. Fisher’s recent report revealed that since June 2009, Texas alone was responsible for 37 percent of all net new American jobs.

He should ask Americans like me who’ve moved South why we did it. And he should be especially interested in understanding why African Americans are fleeing his home city of Chicago for the South, too.

If he dared to ask, he’d learn that we are all fleeing liberalism and chasing economic freedom, just as our immigrant parents and grandparents did.

But he won’t bother asking. Our ideological academic-in-chief is content to expand the size and scope of the federal government and ignore the successes of our economic laboratories known as the states. He is pursuing 1960s-style policies that got us Detroit, while ignoring those that got us 21st-century Dallas.

In the downtown square of Oxford sits a bronze statue of our most famous storyteller, William Faulkner. “The past is never dead,” he once famously wrote. “In fact, it’s not even past.”

That line has great depth, but in an important sense it’s not quite right.

It turns out that white Yankee migrants like me, African American migrants from Chicago, and businessmen owners in Illinois and around the world, see something in the South that novelists, journalists, academics, and our current president cannot.

— Lee Habeeb is the vice president of content at Salem Radio Network, which syndicates Bill Bennett, Mike Gallagher, Dennis Prager, Michael Medved, and Hugh Hewitt. He lives in Oxford with his wife Valerie, and daughter Reagan.

'The main event is vaccination,' de Blasio said. 'Masks can be helpful, but they don’t change the basic reality. Vaccination does.'
Caroline Downey 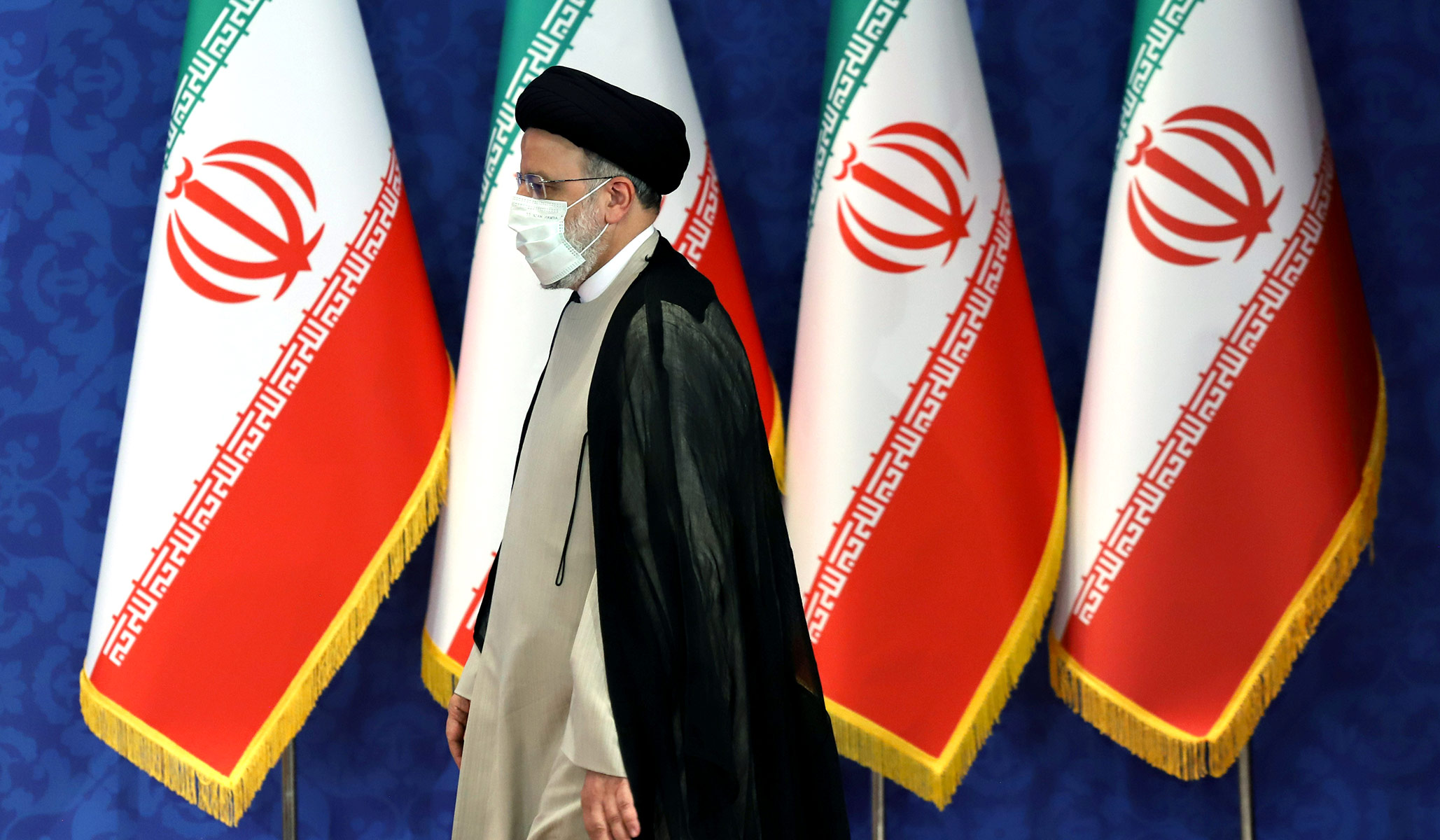 How America Should Deal with Iran’s New President

AOC Lashes Out at Fellow Dems over Inaction on Eviction Moratorium: 'Cowards'

Ocasio-Cortez's fellow squad members have been camping outside the Capitol steps since Friday to protest the end of the eviction ban.
Caroline Downey

Portland is trying to revive the gun violence reduction team after disbanding it last year over concerns about racial discrimination.
Caroline Downey

A Revolt in Cuba

Last month, thousands of Cubans poured into the streets, daring to protest the government that has ruled them for 60-plus years.
Jay Nordlinger

Parents across the country are waking up to the threat posed by politicized school boards. And they're taking action.
Ryan Mills

Wesley J. Smith
The AMA has gone full bore and irrationally woke, participating in the herd stampede that is the transgender moral panic.
View More
Loading...