Obamacare has handed the Supreme Court a golden opportunity.

Did our Founding Fathers create an all-powerful federal government that can wield unlimited authority over its citizens? Can it bludgeon the 50 sovereign state governments into submission on fiscal and other matters? Specifically, can Uncle Sam regulate not just our everyday activities, but our everyday inactivity as well? Moreover, can it set in motion fiscal forces that, over time, will effectively subjugate the states to the federal Leviathan? What, if any, limit is there with respect to federal authority over individuals and the states?

Only rarely does the Supreme Court accept a case that could define the constitutional limits of the federal government. Its decision to hear the many constitutional challenges to Obamacare is one such occasion. The Obama administration’s signature achievement promises to be the central domestic issue in the 2012 presidential and congressional elections — and the very nature of the issues raised in this suit all but guarantees that the political debate over Obamacare’s future will favor conservatives.

Why? Americans instinctively tilt to the ideological right on the most basic questions concerning the size and scope of government, and concerning the government’s inability to deliver, with efficiency, high-quality services. This means conservatives control the high ground in our public-policy debates. Show me a legislative battle that boils down to a choice between a larger government that offers us more services but takes more of our money in taxes and a smaller one with fewer services and lower taxes, and I’ll show you a conservative victory for limited government. Show me a debate that requires citizens to choose between the wisdom of government bureaucrats and that of small-business owners, and I’ll show you a decisive vote for the common sense of the private sector. Ask us to evaluate the relative efficiency of federal, state, and local governments, and you’ll find a clear bias in favor of the government closest to the people. Force us to choose between personal responsibility and dependence on government, and the result will dismay our liberal friends. You get the point.

But when the debate moves down to the ground level, liberals often prevail. It is easier, after all, to argue for an increase in the budget for one isolated child-nutrition program than to defend an across-the-board increase to fund the myriad other programs that constitute our trillion-dollar welfare state.

This tug of war was painfully evident in the titanic struggle over Obamacare. Liberal Democrats and their allies knew that if they could succeed in limiting the scope of the debate to health-care issues — who will be covered, how generous their subsidies will be, and what services those subsidies will buy for them — they would prevail. The natural instinct of Obamacare’s conservative opponents, in contrast, was to elevate and broaden the debate, to raise foundational concerns that transcend health care and go to the very nature of the role and purpose of our government: Obamacare’s erosion of individual freedom, the tax and regulatory burdens it would place on businesses and individuals, its effect on jobs, its suffocating effect on the fiscal integrity and overall autonomy of the states, and even its impact on government’s role in making decisions about the beginning and end of life.

Conservatives ultimately prevailed on just about all of these arguments, it seems, but lost the final roll-call votes. Proponents of the most breathtaking expansion of government power in many decades were downright inarticulate in responding to the most frequently repeated question concerning the individual mandate: If it is constitutional for the federal government to regulate inactivity — or, as one federal court of appeals put it, to require “Americans to purchase an expensive product from a private insurance company from birth to death,” or else incur a fine — is there any sphere of our individual freedom that the federal government cannot control?

It is worth recalling the memorable way Judge Roger Vinson, the Florida district-court judge who struck down the individual mandate as unconstitutional, expressed this conundrum: “It is difficult to imagine that a nation which began, at least in part, as the result of opposition to a British mandate giving the East India Company a monopoly and imposing a nominal tax on all tea sold in America would have set out to create a government with the power to force people to buy tea in the first place.”

Liberals refuse to define the limits on government’s power. Example: During her confirmation hearings, Justice Elena Kagan repeatedly dodged the attempts by Sen. Tom Coburn (R., Okla.) to pin her down on whether the Constitution’s Commerce Clause allows Congress (a) to find that eating lots of fruits and vegetables would cut health-care costs and (b), in furtherance of this goal, to enact legislation requiring every American “to eat three fruits and three vegetables every day.” The only plausible explanation for her dodge is that she believes Congress does possess the authority to regulate our inactivity when it finds that such inactivity contributes, no matter how marginally, to society’s ills.

The other seminal question the Court will entertain is whether the most recent multibillion-dollar expansion of the federal-state Medicaid program in Obamacare exceeds, as the state of Florida’s appeal puts it, Congress’s “enumerated powers and violate[s] basic principles of federalism.” Specifically, does this latest expansion coerce states into “accepting onerous conditions that [the federal government] could not impose directly by threatening to withhold all federal funding under the single largest grant-in-aid program, or does the limitation on Congress’ spending power that this Court recognized in South Dakota v. Dole . . . no longer apply?” That 1987 case to which the Court referred recognized the theoretical possibility that “in some circumstances the financial inducement offered by Congress might be so coercive as to pass the point at which ‘pressure turns into compulsion.’”

If Congress offers any financial inducement that meets this test, it is the grants that fund Medicaid. Medicaid spending, now approximately $400 billion a year, is projected to grow faster (7.9 percent per year) than the other health sectors, including Medicare (6.9 percent) and private health spending (5.2 percent). In many states, the state share of Medicaid now rivals and in some cases exceeds spending on education as the largest budget item. To the extent that this trend continues, Medicaid’s explosive growth will force the states either to walk away from other responsibilities that are traditionally their province in order to fund the Medicaid monster, or else to raise state taxes to unsustainable levels.

Technically, Medicaid is a federal-state partnership that the states enter into on an entirely voluntarily basis. Should the proliferation of federal mandates dictating who and what is covered become too onerous, a state in theory can opt out of the program entirely and provide primary health care and cover the cost of stays in nursing homes and other long-term care facilities on its own terms. The problem with this theory is that the state would have to plot its own course even as its taxpayers continued to send billions to Washington to sustain the Medicaid programs in other states. Medicaid, of course, has grown so large that no state would willingly ask its citizens to participate in such a lousy bargain. The Medicaid program in Ohio, for example, costs a cool $14 billion annually, almost $10 billion of which is covered by Uncle Sam. Should Ohio governor John Kasich decide to leave the program, Ohio’s taxpayers would not be let off the hook for other states’ programs, and Columbus would lose that $10 billion in federal revenue. Texas taxpayers would suffer to the tune of $16.2 billion, Michigan’s loss would be $7.4 billion, and in Florida the hole would be $10.2 billion.

Because the federal share of Medicaid is greatest in the states with the largest number of low-income residents, the coercive effect is greatest in high-poverty states such as Alabama, Louisiana, Mississippi, and West Virginia. Alabama and Mississippi spend $1 billion and $652 million respectively on their Medicaid programs, while Uncle Sam kicks in approximately $3.3 billion in each state. Think the taxpayers in those states would want to forfeit so much of their federal tax money? Ditto for the $5.2 billion in federal funds that Louisiana receives, compared with its contribution of $1.4 billion. West Virginia spends barely half a billion dollars but receives almost $2 billion from Washington.

The bottom line here is that if the High Court determines that the Constitution allows federal bureaucrats to regulate our inactivity and that the “financial inducement offered by Congress” in the current Medicaid program does not qualify as unconstitutional “compulsion,” then there are no effective limits on what the federal government can do to subjugate its citizens or the 50 states. If the 2012 election becomes a referendum on the limits of government power, it will be an election well worth having.

— Michael G. Franc is vice president of government studies at the Heritage Foundation. 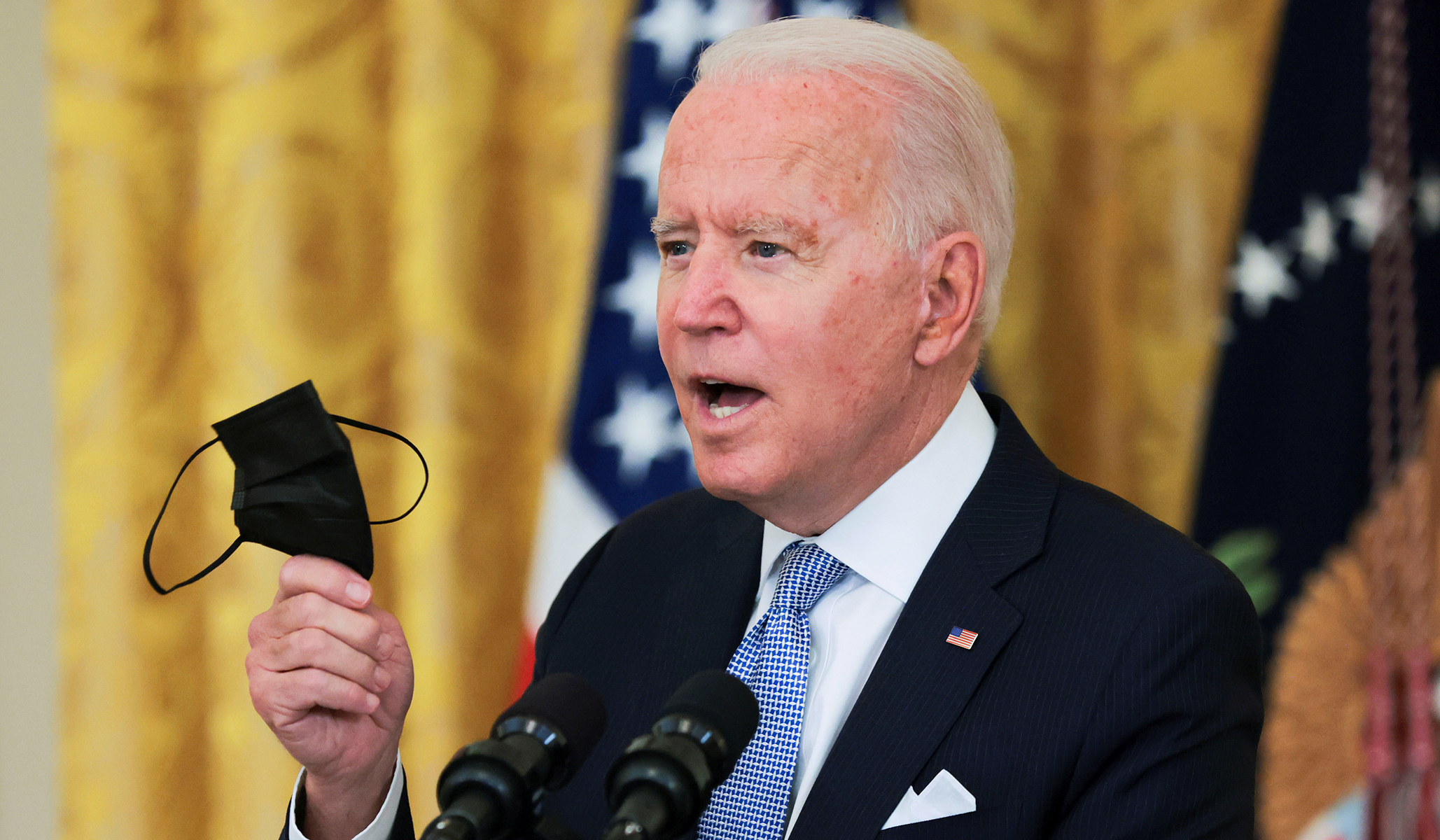