Multi-decade neglect has sent our Navy into decline — and Obama has accelerated the trend.

Barack Obama has never understood why we must maintain a strong Navy or why the decline in the number of ships is such a big deal. He cited the advanced technology of our equipment in his condescending and arrogant quip after Romney raised the issue. Obama’s sneering response — “We have these things called aircraft carriers where planes land on them. We have these ships that go underwater, nuclear submarines” — completely missed the point.

In citing high technology, Obama gave us a display of brazen hypocrisy at its finest. On his watch, the Department of Defense has been cutting procurement programs such as the F-22 and the Expeditionary Fighting Vehicle. In both cases, our military personnel must now make do with aging alternatives (the F-15C and AAV-7 family of vehicles). The F-15 entered service in 1976, the AAV-7 in 1972. By the 2016 election, both of these systems will be 40 years old, and expected to still be in service for as much as a decade. So much for relying on new technology — Obama has halted production of the high-tech replacements.

The Obama administration’s neglect of the Navy can be typified by the early retirement of the USS Enterprise (CVN 65) and its plans to decommission other naval assets. In August of this year, I outlined on NRO why the Enterprise should remain in service, but the Big E is only the most prominent asset slated for premature retirement. The administration also plans to decommission and scrap six Ticonderoga-class cruisers, although the vessels have as many as 15 years of service life left (even without further overhauls). Maintaining freedom of the seas requires hulls in the water — and the Navy hasn’t even started building the replacements for these cruisers. At present, all we have is a design study called CGX, which may or may not enter production.

This is one area where Obama is particularly culpable: His administration, in an effort to cut costs, proposed the retirement of the USS Enterprise (which his allies in Congress passed in 2009) and the six cruisers. Numerous crises are heating up around the world, as recent events show, but there is no indication that Obama has reconsidered these retirement plans. Certainly, it would not be hard to halt the retirements, and extenuating circumstances clearly warrant a supplemental appropriations bill. None of our carriers or submarines — no matter how high-tech they are — are capable of covering the Persian Gulf and South China Sea at the same time, or the Mediterranean Sea and the Korean peninsula simultaneously.

Obama and his allies in Congress talk about cutting the defense budget in order to spur “nation-building at home.” Accordingly, they have accelerated the decline, begun in 1991, of the U.S. Navy’s ship totals. What they fail to mention is the fact that China’s defense budget has at least quadrupled since 2000. China is becoming more aggressive around the Senkaku Islands and the South China Sea, in disputes with American allies such as Japan and the Philippines, and it has just commissioned its first aircraft carrier. The Chinese build-up, including new planes, stands in stark contrast to the Obama administration’s negligence in failing to keep the Navy properly maintained.

As the Chinese buy new ships, planes, and armored vehicles, the United States under Obama seems content to stand still. At the very least, the nation should have a quantitative edge in the latest weapons. To that end, the administration should halt the retirement of equipment (including planes and ships) and also build new equipment. If he does not follow this path, Obama will have made America’s task in a potential war with China more difficult.

In World War II, when the United States built a navy second to none, our military had a running start with the Naval Expansion Act of 1938 and the Two-Ocean Navy Act of July 1940 — bills passed long before the attack on Pearl Harbor. But even with that running start, most of those ships did not arrive on the front lines until mid-1943 or later, and many sailors and Marines paid the price in blood for America’s failure to prepare. Who will pay the price today, in the event of military conflict?

New naval construction and the overhauling of older assets also have an important side benefit: new jobs. Spending dollars this way is not the “weaponized Keynesianism” that critics decry. It’s simply a prudent investment — certainly more prudent than the taxpayer dollars lavished on Solyndra, A123, and other green-energy “investments.”

Ultimately, the neglect of the United States Navy has been a multi-decade scandal. Romney is to be commended for proposing to rectify this disgraceful situation, although the 313-ship force level is still only a little more than half the total of the 600-ship Navy that was able to send six carriers to the Persian Gulf for Operation Desert Shield/Desert Storm. In this case, Romney’s proposed build-up is a “starter home” for rebuilding the Navy — but much more will need to be done.

— Harold Hutchison is the author of the novel Strike Group Reagan. 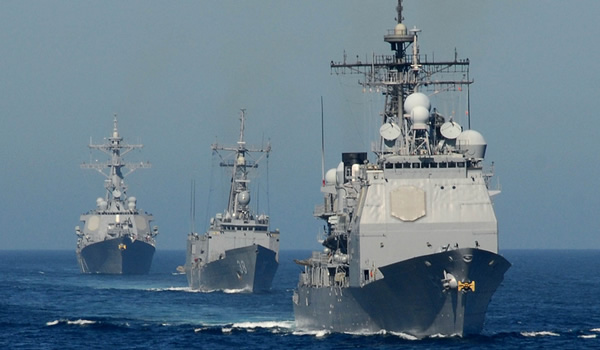