Encouraged by Sharpton and other agitators, too many see rioting as a black entitlement.

Beleaguered store owners in Ferguson, Mo., are boarding up their shop windows again; police departments throughout the area are purchasing riot gear; and the governor of Missouri has declared a state of emergency, a condition precedent to activating the National Guard — all in anticipation of the grand jury’s imminent decision on whether to indict Officer Darren Wilson for the shooting death of 18-year-old Michael Brown in August. These depressing precautions are considered normal. Fifty years after the cataclysmic riots of the 1960s, rioting is still regarded as virtually a black entitlement. No one is “bracing,” in press parlance, for white riots or police violence should Officer Wilson be indicted. Nor were there preparations for Asian riots last month in Los Angeles as a jury heard a murder case against a 22-year-old thug from South Central L.A., who, along with an accomplice, had shot two Chinese engineering students attending the University of Southern California in 2012. That murder, as the Ph.D. candidates sat quietly in their car near campus, was part of a horrific pattern of attacks on Asian students at USC, one that has not resulted in either the threat or the reality of Asian “unrest.”

The fear of riots in Ferguson has grown more intense because of a growing sense that the grand jury might not deliver a murder indictment. Why might it not indict for murder? There is no hint of jury bias or biased prosecution, despite the groundless and incendiary claim to the contrary by a Brown family lawyer. Rather, the jury might not indict for murder because the evidence might not support a murder charge. The story offered up by Brown’s friend Dorian Johnson about the shooting — that Wilson had grabbed Brown without provocation and tried to choke him, and then had ruthlessly shot Brown when his hands were up — was always unlikely. Forensic evidence supports Wilson’s claim that Brown had repeatedly punched and scratched Wilson in his car and tried to grab his gun, putting Wilson in fear for his life. One might think that it would be good news if Wilson did not initiate the violent encounter or shoot Brown in cold blood: It would mean one less instance of alleged police brutality. Instead, the possibility that there might be no basis for charging murder apparently increases the risk of violence, since the conviction that Brown was the victim of murderous police racism is unfalsifiable.

Normal, as well, is the sickening sense of dread with which one awaits another possible outbreak of black rage. The press’s eager expectation of such an outbreak is palpable. After all, it has been fueling the conceit for years that blacks remain under siege by white bigots in the criminal-justice system, schools, and workplace. The Obama administration has lent its prestige to this conceit, charging, for instance, that the elevated rate of black school suspensions reflects administrator and teacher bias. The disproportionate rate of black students’ misbehavior is left completely out of the anti-discipline crusade, just as the disproportionate rate of black crime is ignored when the media, the White House, and academics discuss allegedly racist police activity and incarceration. The mantra of the Ferguson protests is “stop killing us.” Amazingly, this command is directed at police officers, not at black criminals. In 2013, there were 6,261 black homicide victims in the United States. The police kill roughly 400 individuals a year, most of them armed and dangerous, out of about 40 million police-civilian contacts. If the police eliminated all fatal shootings, it would have almost no impact on the black homicide risk. The killers of those black homicide victims are overwhelmingly other blacks, resulting in a death rate in inner cities that is ten times higher for blacks than for whites. In 2013, 5,375 blacks were arrested for homicide, compared with 4,396 white and Hispanic homicide suspects combined. Blacks are only 13 percent of the national population. Recent black victims of this black homicide spree include a 29-year-old woman who was shot in the head in Watts in late October 2014, a 15-month-old girl who was killed by stray gunfire in Irvington, N.J., also in October, and a 14-year-old girl who was killed in Paterson, N.J., in September. No one “braced” for riots after those killings.

Al Sharpton crows constantly about his favored status as President Obama’s civil-rights liaison. If he wanted to actually earn such an august role, he should be out in Ferguson every day insisting that civil violence is never justified, that no hard-working store owner deserves to have his livelihood destroyed for an incident he had no control over, and that blacks do themselves no favor with the implicit threat of riots. Such violence betrays the millions of hardworking blacks who deplore criminality and fiercely defend law and order. Sharpton should emphasize that the grand-jury proceeding has been thorough and conscientious. Brown family lawyers complain that it has gone on too long, as if length is a sign of malfeasance; had the proceedings been brief and the outcome not to their liking, they would have complained about brevity. A black-separatist group has offered a $5,000 bounty for the location of Officer Wilson. Wilson’s life is effectively destroyed. Sharpton and other black leaders should denounce such slow-motion lynchings. Ferguson’s business community will also be wounded for years. Sharpton could announce a “Buy Ferguson” campaign. And U.S. Attorney General Eric Holder, before he leaves his post, could emphasize that America’s criminal-justice system is a model of fairness.

It will, of course, take an enormous amount of courage for the grand jury to follow the evidence, if that evidence is insufficient to indict for murder. But the violence, should it come, is ultimately not the worst aspect of the malaise attendant on the grand jury’s deliberations. The worst is simply the reminder of the country’s persistent racial divide.

— Heather Mac Donald is the Thomas W. Smith fellow at the Manhattan Institute and the author of Are Cops Racist? 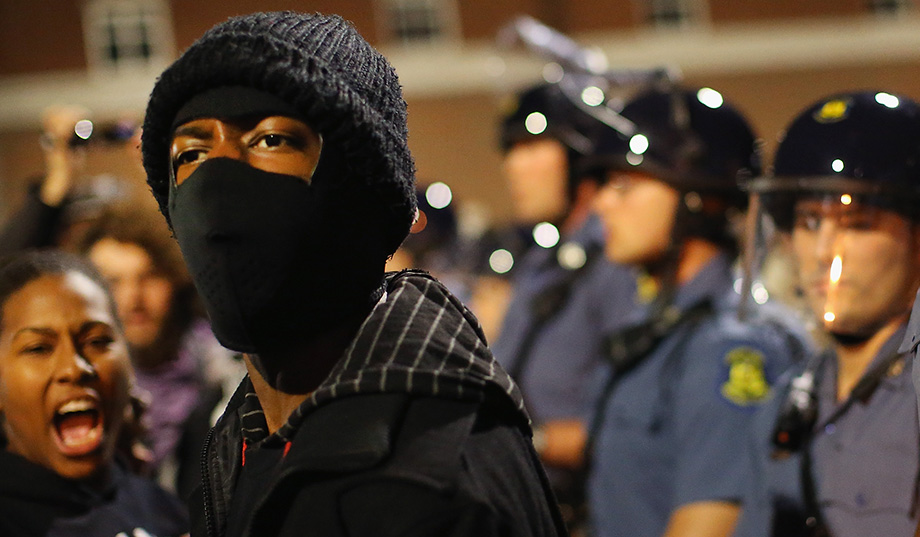