The newly announced presidential candidate has made a habit of battling interviewers. Will it matter with voters?

Kentucky senator Rand Paul, the libertarian ophthalmologist with an eye on the White House, takes a stoic perspective when reflecting on his contentious relationship with the press.

“I don’t complain too much,” Paul told the New York Times on Wednesday after sparring with NBC’s Savannah Guthrie on the Today show. “We do get covered. It’s better to get covered than not covered.”

The newly minted presidential candidate complained during the Guthrie interview that she had “editorialized” in saying he had changed foreign-policy positions at a number of points in his career, just as he protested in February that a CNBC host needed to “calm down” and show “a little more objectivity” when she asked him about his past statements in support of making “most” vaccines voluntary.

EDITORIAL: Rand Paul Has Something to Bring to 2016, But Be Wary

Some GOP operatives and media analysts question whether Paul’s choleric approach to the press, and his apparent desire to teach reporters a lesson, will benefit him in the campaign to come. Democrats have already used the fact that both Guthrie and Evans happened to be women as ammo for their “war on women” attacks. And while Paul’s fights with reporters could give him a boost among conservative voters skeptical of mainstream media outlets, they will also necessarily cost him an opportunity to push his message as pundits instead focus on his temper.

“Rand Paul is a very smart guy, but, I think people — especially right now and especially given how unpopular Congress is — people want to see a happy warrior,” says CNN contributor S. E. Cupp, who provided media training to Republican candidates in 2014. “Whether you think those questions are right or wrong, they really want to see a politician who believes that it’s part of his job to answer questions.”

Paul acknowledged one risk to his approach. “It may gear ‘em up even more if they see it annoys me,” he said Wednesday. Liberals were certainly geared up after he asked CNBC’s Kelly Evans to “calm down” so that he could answer her question about his opposition to mandatory vaccinations, which he thinks people should choose voluntarily. Democratic National Committee chair Debbie Wasserman Schultz, for instance, still works allusions to the interview into her attacks on Paul.

RELATED: Rand Paul is Running. Now the Establishment Takes the Gloves Off

It’s true that reporters are pretty unpopular with the Republican base. “It’s probably not helpful in a general, but in a primary, there is nothing that conservatives love more than somebody kicking the s*** out of the media,” one GOP strategist says of Paul’s performance Wednesday. Former House speaker Newt Gingrich won the 2012 South Carolina Republican primary on the strength of a fight with CNN’s John King during a debate two days before the vote. Conservatives also rallied to defend Wisconsin governor Scott Walker in March, when reporters decided that he needed to opine on the sincerity of President Obama’s Christianity and evolution. All that attention primed him for a raucous welcome at CPAC last month.

Similarly, talk-show host Rush Limbaugh defended Paul on Wednesday. “She showed open disrespect,” he said of Guthrie. “She had no interest whatsoever in the substance of what he was saying and tried to prevent him from saying or contributing any substance.”

RELATED: For Rand Paul, Principle by the Bucket

Cupp argues that Paul’s interviews won’t provide the same benefits that Gingrich earned by jousting with the media. “He [Gingrich] capitalized on the theater of that moment,” she says. “He didn’t go from interview to interview condescending and criticizing every journalist” as Paul has done.

“I think it is of limited value long term,” a former GOP operative concurs. “Campaigns are long and arduous and he’s already had the best two days he’s going to have as a candidate — the launch is the fun part. The follow-through is tougher and the other candidates are going to pound away at him.”

Paul got a taste of the scrutiny that lies ahead when he sat down with Guthrie on Wednesday. After stipulating as a given that Paul appeared to have flip-flopped on many of his “somewhat unorthodox” past foreign-policy positions, such as support for foreign aid for Israel, Guthrie asked Paul if he’d “mellowed out.”

#related#“Yeah, why don’t we let me explain instead of talking over me, okay? Before we go through a litany of things you say I’ve changed on, why don’t you ask me a question: Have I changed my opinion?” Paul replied, before saying that he opposes foreign aid in general but believes it should be eliminated “gradually,” starting with countries that hate the United States.

“And the one thing that is true is that Israel doesn’t burn our flag and so I haven’t proposed removing aid from Israel,” he said. “I still agree with my original statement from years ago that, ultimately, all nations should be free of foreign aid because we shouldn’t borrow money to do it.”

A budget proposal that Paul drafted in 2011 called for the elimination of foreign aid to Israel, but noted that the cut “is not meant to hurt, negate, or single out one of America’s most important allies.” Paul emphasized on NBC that current Israeli prime minister Benjamin Netanyahu had himself said in 1996 that Israel should wean itself off of foreign aid eventually — which might bolster his argument against the programs but doesn’t change the fact that he suggested eliminating foreign aid for all countries, including Israel.

“He needs to realize that he has changed his position on several issues,” the ex-operative says. “Instead of arguing with the reporters on it, he should prepare better answers.”

Paul turned another back-and-forth with the press to his advantage on Wednesday. Asked to explain the circumstances in which he believes abortion should be legal, he called attention to how far the Democratic party has moved left since “safe, legal, and rare” was Bill Clinton’s mantra in the 1990s.

“You go back and you ask Debbie Wasserman Schultz if she’s okay with killing a seven-pound baby that is just not yet born yet. Ask her when life begins, and you ask Debbie when she’s willing to protect life,” he said, per CNN. “When you get an answer from Debbie, come back to me.”

That parry induced the DNC chair to admit she opposes any restrictions on abortions. “I support letting women and their doctors make this decision without government getting involved,” she said. “Period. End of story.”

Paul’s pugnacity with interviewers makes media-training experts wince, but it might not matter outside the political class.

“People don’t always talk in a monotone and sometimes they talk like real people; I just don’t think it’s a problem,” says Stuart Stevens, who advised Mitt Romney during the 2012 election. “In all these things you have to ask yourself: Is this something you’ll be talking about while waiting for votes to be counted? And I think the odds are, while waiting for votes to be counted in the Iowa caucuses or the New Hampshire primary, I doubt this will be a subject of discussion.”

Paul used a more self-deprecating approach to dispatch the sexism charge that Democrats pushed concerning his interviews with Guthrie and Evans.

“I think I’ve been universally short-tempered and testy with both male and female reporters, I’ll own up to that,” he told CNN’s Wolf Blitzer on Wednesday afternoon.

Finally, something Paul and the media can agree on. “Rand patronizing women reporters is a catty, clever DNC line,” the New York Times’ Jeremy Peters tweeted. “But it’s not accurate. I can attest.”

– Joel Gehrke is a political reporter for National Review. 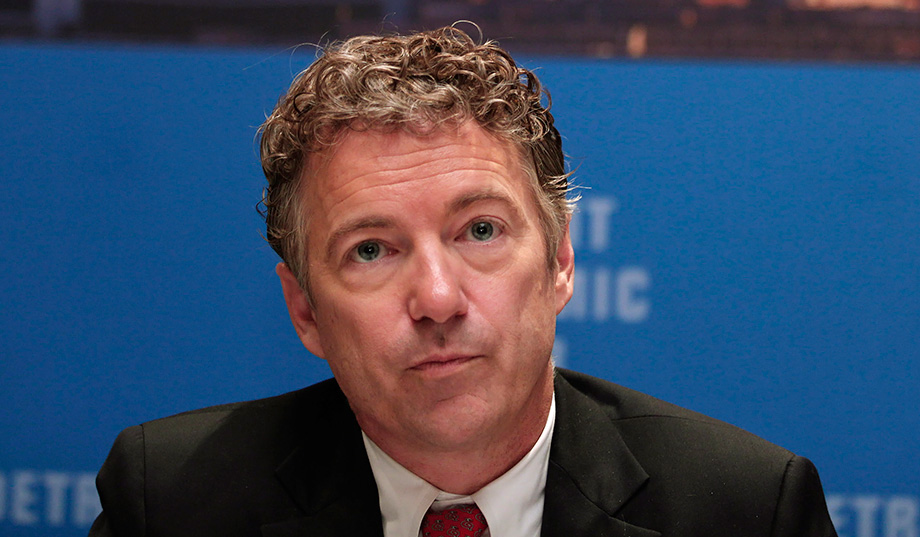