Editor’s Note: This article was originally published in the April 20, 1971 issue of National Review.

Rome – Having business in Rome I thought, I thought to go there by sleeping-car from Montreux, my wife having endorsed the conveyance as exemplary after using it a few years ago. I booked a double stateroom, inasmuch as my wife and I together with paraphernalia tend to overflow; and as we set out by car for Montreux, I thought our gesture particularly appropriate on the very day that the House of Representatives in Washington would decide the fate of supersonic travel.

We waited on the platform as a turbulent sky blackened over the still and misty lake that stretches 80 miles from Geneva to Montreux. The train pulled in dead on schedule at 19:05, as they call 7:05 PM in these parts, and we boarded. In the bustle of bags and porters and ticket-showing, the darkness of the sleeping car wan unremarkable, but as the train slid out I lightheartedly asked the steward, who was wrestling with the bags while holding a mini-flash-light in his mouth, when ho ho would the lights-go on? He mumbled, like a patient trying to communicate to his dentist, something that sounded awfully like “When we get to Rome.” He led us then to a miniscule cabin, the upper and lower bunks already made up, and heaved the bags onto the overhead sack until there was no more room, so that the last two were dumped on the floor, leaving the lower bunk to sit on provided you crouched forward at a 45-degree angle, else you bumped into space preempted by the upper bunk.

The steward explained that because of a recent strike in Rome the electrical system had not been repaired, and because of an administrative over-sight we had not got the second cabin, and the car was full. I asked him in choked accents which way was the restaurant car, and he said there is no restaurant car on this train, hasn’t been for three years, but that when we crossed the border into Italy three hours from now we could run out and buy a picnic basket.

We thereupon resolved to take leave of the Geneva-Rome express, only to learn from the steward that the very next atop, 45 minutes down the line, would leave us stranded in a remote and taxi-less part of Switzerland, So we decided instead to laugh about it; but to pass along these lapidary lines for the benefit of future romantics who think, when headed from Switzerland to the Eternal City, to disdain jet travel.

That day in the life of William Buckleyvitch seems remote, 24 hours later. In the morning there was high mass at St. Peter’s, a brilliant organist, absorbed in the beauty of his music and the purpose it served, transmuting the noisy tourists into soft-shoed pilgrims. And then, sipping coffee and reading the Sunday Times on the Square, we await the Pope, who will appear sharp at noon at his window in the Vatican apartment to deliver the weekly homily.

Five minutes before noon, the shutters opened and the Papal banner, 20 feet long, is lowered. The wind, gusty and irreverent, hurls it back up, and over, and twists it here and there, and one wonders that after 2,000 years the Vatican has not learned how to deal with unruly winds –and then a fantasy: might it happen –just possibly! –that when the Pope appeared, suddenly the wind would quiet down, as the seas at Galilee once did?

Quite the contrary. The Vicar of Christ appeared, to address the crowd of 50,000, his voice somewhat tired and uncertain, like the Church whose voice he is, and the banner revolted right into his face, smothering the microphone. I do not know what he said, not knowing Italian, but I must suppose that he acknowledged the sacrifices that some of those, pressed into the square, had made in coming there; and I recalled that Hilaire Belloc walked all the way to Rome from Paris during my lifetime, and that not so many lifetimes ago, a journey to Rome consumed a major part of the lifetime of many pilgrims; and now, the journey, in modern times, takes longer and longer, as the impediments multiply, and the flesh weakens. 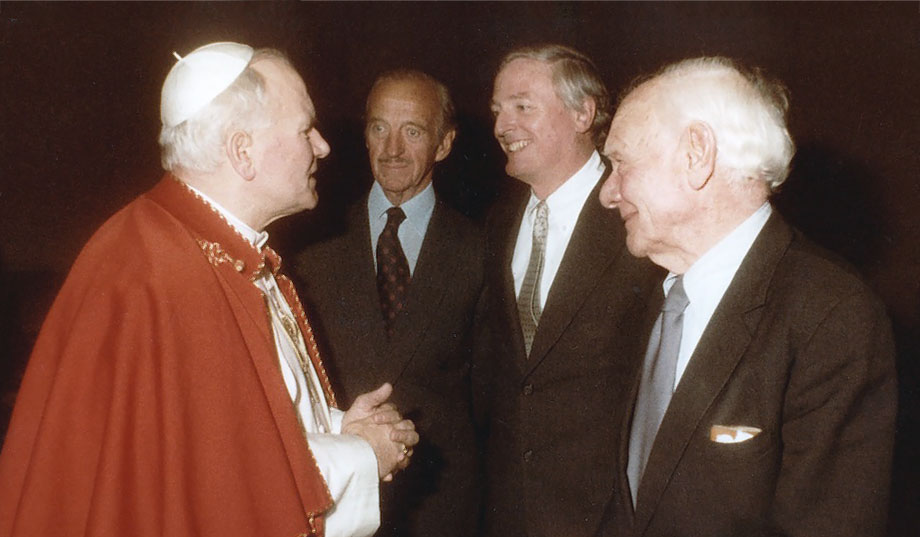