In Neil Gorsuch, Trump has nominated to the Supreme Court a man with deep respect for the Constitution and the freedoms it protects.

If you ask vast numbers of both conservative and liberal Americans what word comes to mind when they hear Donald Trump’s name, the response is immediate: “Authoritarian.” In fact, if there is one theme that has remained constant in mainstream coverage of Trump ever since he surged to the top of Republican primary polls in 2015, it’s that he has authoritarian tendencies. He seeks power, and he cares not for process.

Just look at recent headlines from some of the nation’s most respected media outlets:

To be sure, this concern isn’t confined to the mainstream press. I myself have been deeply concerned with Trump’s authoritarian impulses — including his expressed disrespect for the First Amendment, due process, and private property.

But if Trump is an authoritarian, he just dealt a huge blow to his own agenda: As a Supreme Court justice, Neil Gorsuch will almost certainly be a firewall against federal overreach and a consistent defender not just of the Bill of Rights but of the republican, federalist structure of government the founders established.

The Constitution of the United States is arguably the most effective and powerful single document at restraining tyranny and preserving liberty that has ever been written. Textualists and originalists at their best — and Gorsuch is among the best — respect the language of the document and the intent of its drafters. They apply Constitutional rights equally to all Americans, regardless of ideological affiliation or outcome. And in so doing, they protect our most critical bulwarks against authoritarianism: free speech for all, due process for all, and equal protection for all.

But Gorsuch’s respect for the Constitution extends even further, into an obscure and vital doctrine that may well correct one of Justice Scalia’s greatest mistakes. If you say the word “Chevron” to most Americans, they think “gas station.” Say that word to a tiny class of basement-dwelling constitutional-law geeks, however, and they think “Supreme Court case that mandated deference to administrative agencies’ legal interpretations.”

The case, Chevron U.S.A. v. Natural Resources Defense Council, was decided in 1984, two years before Antonin Scalia took his seat on the Supreme Court bench. Its core holding is that when the court confronts an executive agency’s “construction of the statute which it administers,” then it will defer to the agency so long as Congress hasn’t “directly spoken” to the issue and the agency has engaged in a “permissible construction” of the statute.

These benign-sounding words have led to an enormous amount of presidential and executive mischief and supercharged the stunning growth of the regulatory state. As a practical matter, the Chevron decision facilitated the transformation of executive-branch agencies into entities that combine all three functions of government (lawmaking, interpretation, execution) and place them under presidential control. Fears about Trump’s authoritarianism thus resonate in no small part due to Chevron, because the power of the executive branch (acting through its agencies) has grown to a point where the president has unconstitutionally disproportionate influence over American life.

While Scalia didn’t participate in the Chevron decision, he applied it consistently and on occasion defended it with vigor. Here he is speaking to Duke Law students shortly after ascending to the Supreme Court:

“Broad delegation to the executive is the hallmark of the modern administrative state; agency rulemaking powers are the rule rather than, as they once were, the exception; and as the sheer number of modern departments and agencies suggests, we are awash in agency ‘expertise,’” he said.

“In the long run, Chevron will endure and be given its full scope,” he added, because “it more accurately reflects the reality of government, and thus more adequately serves its needs.”

Scalia reconsidered some of this enthusiasm later in his career, but his late-life skepticism is inconsequential compared to Gorsuch’s recent, full-throated, and direct attack on Chevron in a case called Gutierrez-Bizuela v. Lynch:

There’s an elephant in the room with us today. We have studiously attempted to work our way around it and even left it unremarked. But the fact is Chevron . . . permit[s] executive bureaucracies to swallow huge amounts of core judicial and legislative power and concentrate federal power in a way that seems more than a little difficult to square with the Constitution of the framers’ design. Maybe the time has come to face the behemoth.

He continues (and this really is worth quoting at length):

Transferring the job of saying what the law is from the judiciary to the executive unsurprisingly invites the very sort of due process (fair notice) and equal protection concerns the framers knew would arise if the political branches intruded on judicial functions. Under Chevron the people aren’t just charged with awareness of and the duty to conform their conduct to the fairest reading of the law that a detached magistrate can muster. Instead, they are charged with an awareness of Chevron; required to guess whether the statute will be declared “ambiguous” (courts often disagree on what qualifies); and required to guess (again) whether an agency’s interpretation will be deemed “reasonable.” Who can even attempt all that, at least without an army of perfumed lawyers and lobbyists? And, of course, that’s not the end of it. Even if the people somehow manage to make it through this far unscathed, they must always remain alert tothe possibility that the agency will reverse its current view 180 degrees anytime based merely on the shift of political winds and still prevail.

By the standards of restrained judicial writing, this is a primal scream for individual liberty and the separation of powers. If Donald Trump or any other president believes he is a constitutional superman, endowed with vast powers through his control of an immense bureaucracy, Gorsuch is living, breathing Kryptonite.

There remain very good reasons to be concerned about Trump’s respect for liberties he so often scorned on the campaign trail. But the most consequential act of the first month of his presidency is a blow against authoritarianism of all ideological persuasions, and that should cheer anyone who hopes to see the American experiment endure. Neil Gorsuch is a champion of the Constitution, and now more than ever that means standing athwart tyranny, yelling Stop. 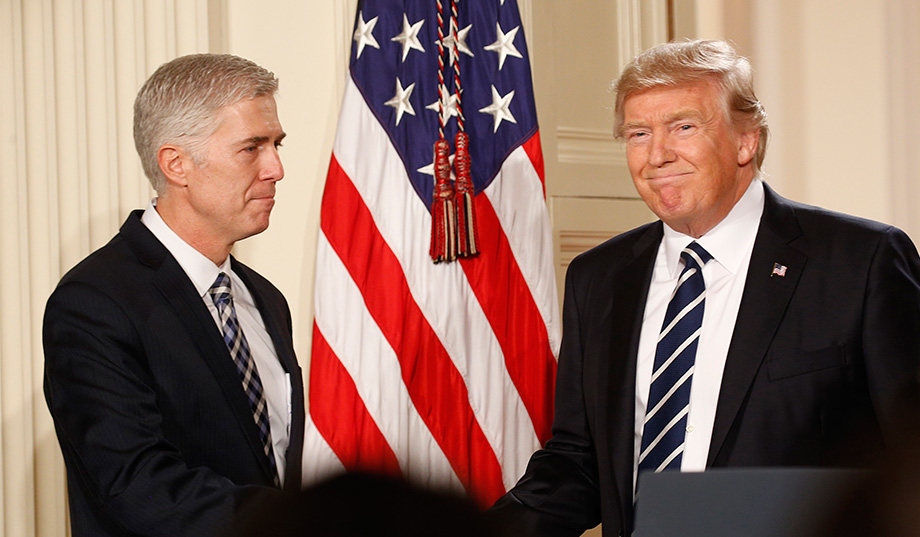