An example for modern presidents

Today marks the anniversary of the death of Dwight Eisenhower on March 28, 1969. He was born in the 19th century and was one of the indispensable figures of the 20th. There were more consequential men in his generation, “consequential” being a word that is morally neutral: Adolf Hitler was born one year before him, Mao Zedong three years after.

We generally remember public figures on their birthdays rather than on the anniversaries of their deaths, with an exception for those who died in assassinations or other dramatic fashions. But there is something to be learned from Eisenhower’s death, a subject to which he gave some real consideration before the moment was forced to its crisis. He had been, during his military career, “General of the Army,” an extraordinary and temporary rank that, before its revival by Congress in 1944, had last been conferred upon Ulysses Grant, William T. Sherman, and (an honorary designation just before his death) Philip Sheridan. The only man ever to outrank Eisenhower while living was General of the Armies John Pershing, George Washington having been promoted to that rank only posthumously.

General Grant had saved the country before becoming its president; General Eisenhower, who was deeply competitive, one-upped Grant and saved the world. (Before that, he had spent 16 years as a major without being promoted.) “I hate war as only a soldier who has lived it can,” Eisenhower later said, “only as one who has seen its brutality, its stupidity.” But in Eisenhower’s army, high promotions were earned on the battlefield, and he must have secretly welcomed the opportunity for advancement. He was, like General Washington, conscious of his reputation.

And what a reputation it was. It is difficult for Americans living in 2017 to imagine a sitting American president, much less a retired one, being the most highly regarded man in the world. But Richard Nixon did not exaggerate in his eulogy of his predecessor: “Some men are considered great because they lead great armies or they lead powerful nations. For eight years now, Dwight Eisenhower has neither commanded an army nor led a nation; and yet he remained through his final days the world’s most admired and respected man, truly the first citizen of the world.”

Eisenhower hadn’t quite made like Cincinnatus, but he did retire to his farm in Pennsylvania, though he spent much of his time in sunny Palm Desert, Calif., where he golfed by day and played bridge by night. He did not go out of his way to inject himself into public life. Part of that certainly had to do with the rise of the conservative movement, which understood itself as opposed to Eisenhower-style Republicanism —“Our principles are round, and Eisenhower is square,” declared young William F. Buckley Jr. — and whose members did not share the world’s awe of Eisenhower. Like Ronald Reagan, Eisenhower had made his peace with much of Franklin D. Roosevelt’s welfare state, leading Barry Goldwater to dismiss his program as “a dime-store New Deal.”

But Eisenhower had a great deal on his agenda: He wanted to balance the budget and end the Korean War. He integrated the military, which Harry Truman had promised and failed to do. He also desegregated the District of Columbia and the federal government, and used federal funding as leverage to force desegregation elsewhere. He fought for and signed the Civil Rights Acts of 1957 and 1960. When the Democrats in Arkansas refused to comply with Brown, Eisenhower sent in the 101st Airborne. He established NASA and DARPA and signed the National Defense Education Act into law. He oversaw the revision of the Atomic Energy Act to allow for the development of civilian nuclear power. He smacked down Joseph McCarthy and, when his advisers unveiled a crackpot scheme to use nuclear weapons to save the French position at Dien Bien Phu, he replied: “You boys must be crazy.” He sent U.S. troops into Lebanon to stop a Soviet-backed revolt. He convinced Congress to pass the Formosa Resolution, obliging the United States to defend Taiwan against Communist China. He forced the withdrawal of foreign forces from Egypt during the Suez crisis. He saw to the elevation of West Germany as a full NATO member, a critical turning point in European affairs. He helped Mohammad Mosaddegh into an early retirement. He welcomed two new states into the Union.

The remarkable thing is that, while all that was going on, Eisenhower managed to convince the nation that there were no crises and nothing to worry about, that he was spending much of his time playing golf. The nation was happy to believe him.

He had waited a long time for his talents and abilities to be appreciated, but upon his election he was intent on serving only a single term. He served two, and perhaps these visual aids will shed some light on how he came to that decision:

But even though he was very much conscious of his place in the world and its history — and was not exactly immune to the temptations of vanity, or to temptation, period — he set an example, tragically abandoned, of conducting a presidential career with humility. Knowing that he would lie in state after his death, he made detailed plans for the event: He was laid out in the $80 government-issue wooden coffin that was the final resting place of thousands of ordinary soldiers, wearing an army field jacket. A soldier, David Ralph, sang “The Old Rugged Cross” at his funeral, which ended with a tape recording of “America the Beautiful.”

He governed in complicated times. Those who take to heart only his warnings about the “military-industrial complex” should bear in mind that he oversaw a military budget that was, in real GDP terms, three times larger than it is today. He sometimes called himself a “progressive conservative,” meaning that, unlike the conservatives of his time, he saw no pressing need to dismantle the welfare state — which at the time (again, in real GDP terms) was barely a quarter of the size it is today. Time has a funny way with things: The conservative movement rejected Eisenhower in the 1950s, but which libertarian, national-security conservative, or traditionalist in 2017 would be unhappy if today’s Republicans cut 75 percent of the welfare state, tripled military spending, cut taxes modestly, and balanced the budget in the process — while working under a president with an excellent record on the most pressing domestic issue of his time?

It is not 1957 anymore, and a return to Eisenhower-era policies would be neither wise nor popular. But a return to modesty, prudence, and genuine responsibility? That is something to which we ought to aspire. The great events of Eisenhower’s day went from Great War to Depression to Holocaust to Cold War, a ghastly progression, but Eisenhower remained famous for his sunny disposition and his winning smile — which was, of course, partly genuine and partly camouflage that protected others from the burdens he bore. The United States does not need a Dwight Eisenhower holiday to go along with the days set aside for men such as Washington and Lincoln. What the United States does need is 365 days in the year on which we insist that the men with whom we entrust the nation’s business endeavor to live up to the example set by men who did so much more with so much less in incomparably harder times — that they, to the extent that they have it in them, be like Ike. 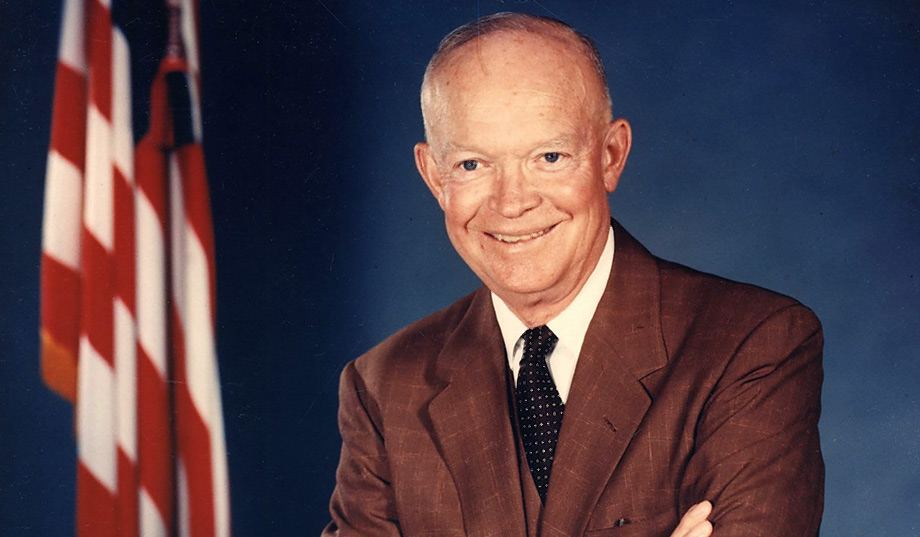