It’s time to rein in a major entitlement program and restore checks and balances.

Ohio legislators can save taxpayers billions, reclaim control of the largest program in the state budget, and set a positive example for other states by overriding Governor John Kasich’s recent Medicaid-policy vetoes.

In its biennial budget passed in June, the Republican-controlled Ohio General Assembly approved several provisions meant to restore checks and balances between Ohio’s governor and legislature where Medicaid is concerned. Kasich vetoed them all.

Kasich, a Republican, vetoed language that would have frozen enrollment in the state’s Obamacare Medicaid expansion in July of 2018. Freezing expansion enrollment would help tens of thousands of able-bodied, working-age Ohioans leave the welfare rolls as they find work, lowering the cost of a program whose enrollment has surged from 2.2 million to 3 million since Kasich took office in 2011.

The governor also vetoed restrictions on the executive branch’s power to change Medicaid eligibility and provider payment rates, limits on the Ohio Controlling Board’s authority to make appropriations without legislative approval, and instructions for his administration to ask for federal approval of a Medicaid waiver requiring some enrollees to work and contribute to health savings accounts.

“Love it or hate it, Kasich really took GOP lawmakers to the woodshed over Medicaid policy,” Jim Siegel, a reporter for the reliably pro-Kasich Columbus Dispatch, wrote on Twitter.

It’s not the first time Kasich has shrugged off health-policy proposals approved by supermajority Republicans in both the Ohio house and the Ohio senate. Kasich has refused to implement a health-care price-transparency law he signed in 2015, and in 2013, he vetoed budget text prohibiting Ohio from expanding Medicaid to working-age adults with no kids and no disabilities.

Circumventing the General Assembly after devoting most of 2013 to a failed campaign to win their support for the Medicaid expansion, Kasich expanded the entitlement unilaterally and then told the quasi-legislative Controlling Board the entire program would go bankrupt if they did not appropriate new Obamacare spending.

Kasich said his Medicaid expansion would enroll 447,000 Ohioans at a cost of $13 billion by 2020. Actual enrollment is now 725,000, and total costs have already exceeded $13.5 billion. Each month for the past year, Kasich’s decision has cost federal taxpayers at least $400 million.

Now, to wrest control of roughly half the state’s budget from a term-limited governor who has made a national name for himself as a Republican Obamacare supporter, the General Assembly must override Kasich’s veto of the expansion freeze. In doing so, they would also undermine Kasich’s attacks on congressional health-care negotiations from the left.

The Medicaid-expansion freeze approved by Ohio’s legislature would take effect 18 months before the American Health Care Act approved by the U.S. House would reduce federal matching funds for new enrollees. Kasich has complained that the Senate’s Better Care Reconciliation Act, drafted to spend far more on Medicaid expansion than the House bill, would “starve” Medicaid.

Ohio legislators who voted for the 2018–19 state budget worry that even a small percentage of the expansion’s costs, if borne by the state instead of the federal government, will crowd out funding for the truly needy. Tens of thousands of Ohioans are on waiting lists for Medicaid waiver programs; Kasich recently cut 34,000 disabled Ohioans from Medicaid, and two years ago he tried to cut eligibility for pregnant women and women with breast or cervical cancer.

Even with the expansion’s current 95 percent federal match, Ohio’s $20 million state share each month is $20 million the state cannot spend on services for the truly needy. The federal match will fall to 90 percent by 2020, doubling states’ costs. And while Obamacare promises that the rate will never fall lower, it’s likely only a matter of time before Congress decides otherwise and cuts the rate to save money, even if the effort to repeal Obamacare falls through.

The current reimbursement rate also creates bad incentives for states because it is much higher than the match rate for traditional Medicaid. In Ohio, the federal share of traditional Medicaid costs is 63 percent, for example — which makes cutting state spending on care for the elderly, the disabled, pregnant women, children, and impoverished families a more effective cost-saving technique than cutting state spending on the Medicaid expansion’s able-bodied, working-age adults.

If Obamacare’s expansion of the program had the same federal match rate as traditional Medicaid, Ohio would be on the hook for seven times as much new welfare spending as it is today. In some states, the disparity is even worse. An expansion freeze in Ohio could set a precedent for other states to begin winding down the program before its enrollment flood sweeps away more taxpayer resources and causes more harm to the truly needy.

Still, pressure from hospital lobbyists, labor unions, and the media to let Kasich’s veto stand is strong. While multiple news outlets reported that “hundreds” attended a July 5 rally opposing an expansion freeze, only the Dayton Daily News noted that 160 of the attendees were employees of CareSource, a Medicaid managed-care company that’s profiting handsomely from the addition of 725,000 more Ohioans to the welfare rolls.

The Ohio Hospital Association (OHA) — a lobbying group that named Kasich to its Hall of Fame this spring — is working to stop an expansion freeze at the state level while simultaneously pushing back against Congress’s attempts to change the program’s funding.

Tens of thousands of Ohioans are on waiting lists for Medicaid waiver programs.

Kasich and OHA argue that Medicaid expansion is vital for drug addicts and the mentally ill, but the Kasich administration says the program provided just $279 million last year to treat addiction or behavioral-health problems in the state. By contrast, Kasich’s expansion of the entitlement cost $4.7 billion in fiscal year 2016; based on his own figures, 94 percent of the spending on a program the governor insists is needed for drug addicts and the mentally ill is not spent treating addiction or mental illness.

Data suggest that Medicaid expansion has made the opioid crisis ravaging Ohio and other states worse, not better. An Ohio Department of Medicaid assessment found that fewer than half the state’s Medicaid-expansion enrollees have jobs, fewer than half say the program has improved their health, and two-thirds have not reduced their dependence on emergency rooms.

Instead of lobbying to push more of their indigent-care costs to federal taxpayers, hospitals should work with state lawmakers and local charities to improve access to addiction treatment, mental-health services, and preventative care. For most of Ohio’s nonprofit hospitals, charity care was a tiny percentage of expenditures before Kasich bloated the welfare rolls so dramatically that one in four Ohioans is now on Medicaid.

John Kasich’s second and final term as governor ends January 2019. Freezing Medicaid-expansion enrollment before he leaves office is a proactive way for the General Assembly to help Ohio recover from his mistakes, and could influence important debates in Congress and other beleaguered expansion states.

John Kasich’s Campaign to Save Obamacare 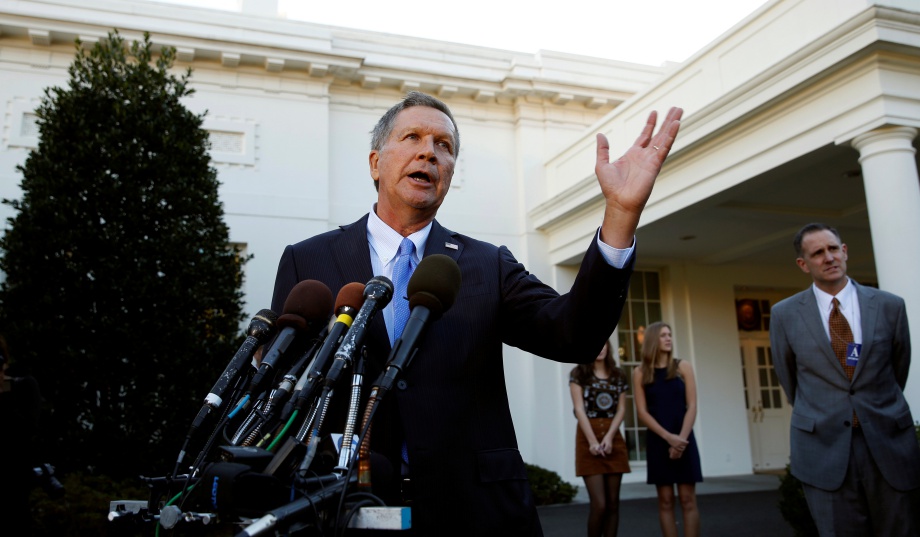