DeSantis Hints at Political Consequences for Companies That ‘Genuflect’ to ‘Wokeness’

Maxine Waters Tells Protesters to ‘Stay in the Street,’ Be ‘More Confrontational’ If Chauvin Acquitted

This Day in Liberal Judicial Activism—April 18

Three Books to Read on the COVID Catastrophe

‘Taken seriously,” Milton Friedman once wrote, “the doctrine of ‘social responsibility’ would extend the scope of the political mechanism to every human activity.” Friedman concluded that the only social responsibility of business is to increase its profits. That sounds about right to conservatives, but say it in Silicon Valley and you’ll get the side-eye. Google, after all, wants to not be evil, and Facebook’s apparent new purpose is to build a global community. But both Google and Facebook, in an effort to become more attractive to consumers and thereby increase profits — or at least raise market expectations for future profits — have waded into the information sector. Their missteps raise legitimate questions about how and whether Friedman’s insight fits their situation.

If you type in a query on Google, it not only lists search results but also spits out “Top Stories” if your query pertains to breaking news. Similarly, Facebook is no longer simply a way to connect with your friends, but also a way to keep abreast of trending news. The two companies are now information gatekeepers, arbiters of what is and isn’t newsworthy, authorities on what you should look at first, next, or not at all. By Friedman’s standard, that’s well and good: These are for-profit firms providing a service that increases their market share. But in the wake of the horrific massacre in Las Vegas, it’s becoming clear that the two companies are failing to live up to their own self-imposed social responsibility to their customers.

In the shooting’s immediate aftermath, a man named Geary Danley became the prime suspect of amateur sleuths on 4chan. He shared a last name with a woman announced as a “person of interest” by police. He happened to “like” several anti–Donald Trump pages on Facebook. For the alt-righters on 4chan, that was all it took to make him a convenient avatar. In itself, this is unremarkable: Forums such as 4chan often disseminate misleading information after major events. But Google’s role made it significant. In the period immediately after the attack, any user who heard the man’s name trickling around and queried it on Google saw that a 4chan thread naming Danley as the shooter was one of Google’s Top Stories. This link stood alongside legitimate news sources covering the developing horror, with nothing to separate it: 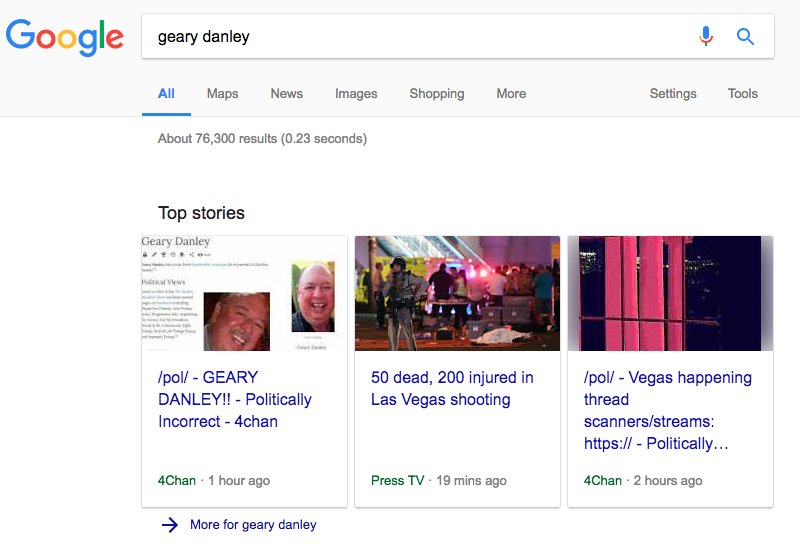 The problem is emphatically not that Google linked to a 4chan thread. It’s that Google put a 4chan thread in a space reserved for news. In an email discussing this move with reporter William Turton from The Outline, an unnamed Google representative said “the Top Stories section of search” “highlights fresh, breaking stories and includes content from both news sites and the web . . . So when the fresh 4chan story broke, it triggered Top Stories which unfortunately led to this inaccurate result.” Even after the mistake, the Google representative continued to refer to content on 4chan as if it were news.

Meanwhile, over on Facebook, users could run across the same misinformation on the Crisis Response page for the Las Vegas attack. This page, which is intended to let users see which of their friends are safe in a crisis and obtain helpful information, contained links to “Alt-Right News” and a since-deleted Gateway Pundit page, both of which wrongly identified the same man seized on by 4chan as the shooter.

Even allowing for confusion and a fast-paced news flow, the fact disturbs: Early yesterday morning, someone looking for more information about the Vegas shooting on two of the most frequented web sites was linked to corroborating stories identifying an innocent person as the shooter. That’s most immediately a problem for Danley, who had his reputation tarnished and could have had his safety threatened. But in the longer run, it’s a problem for a society that wants to stay informed.

Conservatives were understandably unnerved by the prospect of Google marking ideological sites as dubious.

It also complicates the debate around so-called “fake news.” After the election, sites such as Google and Facebook made noises about making active decisions pertaining to the plausibility of certain information sources. Conservatives were understandably unnerved by the prospect of Google marking ideological sites as dubious because, in the eyes of a company that recently fired an employee for heresy, such sites might be said to disseminate false information. The threat of nakedly one-sided corporate drones sitting in judgment of truth or falsehood prompted Graham Hillard to ask in National Review Online, “‘Marked’ by whom? ‘False’ according to what standard?”

Good questions. It’s tricky business to proclaim oneself the arbiter of what’s acceptable as political news, given that most of politics involves not just discoverable facts but hotly contested values. We live in a nation where ideologues seek to squelch legitimate disagreement by labeling dissenters as beyond the pale. And 21st-century liberalism tends to explain reasonable disagreement as a matter of misinformation. Earnest Silicon Valley folks generally lean to the left, and people on the right worry that any filters that such folks design would impose political litmus tests. Hillard continued that “an educated populace — not the indoctrinated citizenry of the Left’s fondest dreams — is the only true safeguard against the democracy-wrecking threat of ‘fake news,’ if indeed such a threat exists.”

To be sure, Facebook and Google shouldn’t be determining which ideologies track closer with the truth and which don’t. But the more fundamental question is whether they should be in the business of journalism at all. News-aggregation features might maximize these companies’ bottom line, and a superficial look at Friedman’s insight might prompt pro-market observers to think this is fine.

News, however, is not like other markets, and delivering information carries with it some degree of obligation to the culture at large. Responsible journalists are more than just profit-maximizers. Yes, the news business is a for-profit business, and so it should be. And yes, as James Taranto documented in his magisterial final column, “partisan and ideological bias is a symptom of a deeper disorder that afflicts journalism,” whose practitioners have arrogated to themselves “the authority to issue pronouncements about what is true.” Yet the answer to whether or not 4chan and Gateway Pundit are reliable sources is not ideologically fraught: It’s no. If Google and Facebook can’t operate with basic editorial standards, they shouldn’t be determining what is and isn’t news. In the pursuit of profits, Silicon Valley has entered the business of journalism — and taken upon itself a social responsibility it seems unable to meet.

On Integrity in Journalism

On Journalism and Speculation after a Tragedy

Cahill denied a motion for mistrial but explained how the California lawmaker has created a potentially significant issue on appeal if Chauvin is convicted.
Andrew C. McCarthy

The statement came in response to the defense attorney’s argument that Waters’s comments could prejudice the jury.
Caroline Downey

The PRO Act is intended to strengthen unionizing efforts and would block right-to-work laws, which allow workers to opt out of union memberships and accompanying fees.
Zachary Evans

Pelosi: Waters Should Not Apologize for Urging Protesters to 'Get More Confrontational'

‘Maxine talked about confrontation in the manner of the Civil Rights movement,’ the House speaker said.
Brittany Bernstein

Stanley Kurtz
The woke revolution in the classroom is about to go federal.

Andrew C. McCarthy
It all comes down to intent.