When Does the ‘Tough on Russia’ Part of Biden’s Presidency Start?

The Lessons of the Assassins

On this matter, the Left’s fingers predictably point one way — at the United States.

Reputedly tolerant politicians, pundits, and protesters on the left aim their fire at the Department of Homeland Security, whose secretary, Kirstjen Nielsen, was hounded out of a Mexican restaurant last week by Democratic Socialist agitators. Other leftists showed up at Nielsen’s home and blasted recordings of screaming children.

Meanwhile, a decapitated and burned animal carcass recently landed on the front porch of a DHS official, ABC Radio reports. (PETA, where are you?) This occurred amid what DHS manager Clair Grady described to staffers as “a sharp increase in the overall number of general threats against DHS employees.”

Immigration and Customs Enforcement is a “terrorist organization,” according to Cynthia Nixon, the far-left actress now running for New York’s Democratic gubernatorial nomination. From San Diego to Detroit to New York City, leftist demonstrators have been taking it to the streets to demand ICE’s abolition.

A sign in the front window of The Red Hen, a restaurant in Lexington, Va., quotes Dr. Martin Luther King Jr.: “Love is the only force capable of transforming an enemy into a friend.” In a sucker punch to King’s sentiment, that restaurant’s co-owner kicked White House press secretary Sarah Huckabee Sanders and her family out of that establishment after they ordered dinner on Saturday, citing moral objections to serving the presidential aide.

“We just felt there are moments in time when people need to live their convictions,” Stephanie Wilkinson told the Washington Post. “I would have done the same thing again.” The same liberals who cheer this hostile action would deny a baker’s moral right to refuse to produce a gay-wedding cake. Meanwhile, Sanders’s colleague, presidential adviser Stephen Miller, has endured protesters shouting into bullhorns outside his Washington, D.C., apartment building.

“If you see anybody from that cabinet in a restaurant, in a department store, at a gasoline station, you get out and you create a crowd,” Representative Maxine Waters (D., Calif.) implored immigration activists in Los Angeles on Saturday. “You push back on them. Tell them they’re not welcome anymore, anywhere.” Thanks to these potentially violence-inducing words, the House may vote on Representative Andy Biggs’s (R., Ariz.) motion to censure Waters. Every Democrat and Republican should stand up and be counted for throwing either ice water or jet fuel on this raging national bonfire.

More than ever, liberals have invoked Hitler, Nazi Germany, and even Auschwitz in their revolting overreaction to Trump’s bid to spare children the discomfort of being detained with the illegal-alien adults (parents or otherwise) with whom they have broken into the United States of America.

The Left would have bellowed even more loudly last week if these children initially had been locked up with these adults as the latter were prosecuted under Trump’s zero-tolerance approach for violating 8 U.S. Code § 1325: “Improper entry by alien.” As it happened, putting these boys and girls into the care of the U.S. Department of Health and Human Services’ doctors, teachers, and social workers also enfoamed liberal mouths. So Trump backed down, which was not quite Hitler’s style. These children and adults now will be held together, which still enrages the open-borders crowd. They prefer that federal agents simply point these illegal aliens north and tell them, “Have fun!”

These Leftists blame America, and Trump, for the status quo. But they devote none of their bottomless vitriol to demanding that the bloodthirsty members of the MS-13 gang (slogan: “Kill, rape, control”) stop terrorizing their fellow Salvadorans and other Central Americans, to the point where these people flee to the U.S.A. with their kids or send their boys and girls north on their own. House Democratic leader Nancy Pelosi (D., Calif.) actually implied that a “spark of divinity” resides within every MS-13 member.

The Left never yells at politicians in El Salvador, Guatemala, Honduras, Mexico, or other nations to clean up and enrich their own countries. Imagine if illegal aliens could prosper in peace in their own homelands. Why not insist, for instance, that officials in Tegucigalpa should Make Honduras Great Again?

Democrats never call on Mexico, Costa Rica, or Panama to absorb some or all of these migrants. Where is it written that foreigners who do not like their living conditions are entitled to relocate to the U.S.A.? Once Hondurans (per capita GDP $5,500, per the CIA) and Salvadorans ($8,900) escape MS-13 and reach the relative safety and wealth of Mexico ($19,500), why not settle in Guadalajara, Tampico, or Chihuahua? Who says these people must spurn what Mexico has to offer and instead keep heading north into America ($59,500)?

And why doesn’t the Left insist that Mexico’s liberal government help solve this humanitarian mess? Mexican politicians refuse to welcome Central American migrants as their newest residents. Rather, they wave them through: Siga al norte — Keep heading north. This prompts non-Mexican migrants to face such mortal dangers as drug cartels, human traffickers, and secret compartments within blistering big rigs. Mexico should accept at least some of the blame for letting these evils fester on its soil.

For the Left, furthermore, personal responsibility plays no role in any of this.

First and foremost, family separation does not befall Salvadorans, Guatemalans, and others who visit America’s embassies and consulates and complete visa applications. The U.S. government’s doors are wide open at our consular facilities in San Salvador and Guatemala City, our embassy in Mexico City, and 18 other diplomatic outposts all around that country. Enter the USA with visas and passports, and you may keep your kids with you. Amazing!

Yes, this takes time. No, it’s not easy. And not everyone who asks gets accepted.


But not everyone who applies gets into UCLA, the University of Michigan, or West Point, either. Should these institutions be ordered to take all comers? If such public establishments can be selective about the people they admit, so can the United States of America.

Second, illegal-alien parents could have avoided family separation if they simply had presented themselves at official border crossings on America’s southern frontier. At any of the 26 locations on the nearby map, they could have pled asylum, entered a lawful process, and received ample kid-glove treatment. No one would have laid a glove on their kids. 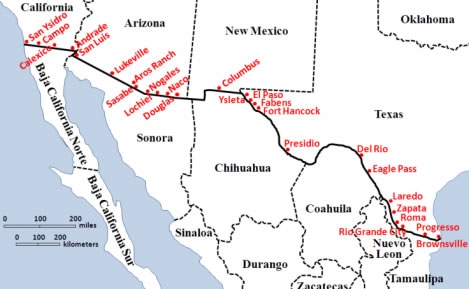 But even this was too much for many illegals. They simply floated or marched across unauthorized spots on the border. This is against the law and, thus, they justifiably have been prosecuted. They should be deported and ordered, “Next time, follow steps one or two.” President Trump correctly argues that these criminals should be tossed instantly for violating American law the nanosecond that their toes tap U.S. soil.

Not one illegal-alien child has reached the U.S.–Mexican border because Donald J. Trump ordered him there.

Third, parents overseas deserve blame for ignoring the steps above and either dragging their kids across blazing deserts or (in a maneuver that DHS says involves 83 percent of children now in federal custody) surrendering their kids to third parties for smuggling across the U.S.’s southern frontier. Other foreign parents have sent their kids here as “unaccompanied minors.” Most probably want better lives for their kids. In either case, they are significantly responsible for putting their kids in harm’s way. Not one illegal-alien child has reached the U.S.–Mexican border because Donald J. Trump ordered him there.

Sandra Sanchez is the mother of the screaming baby who stares up at President Trump on Time magazine’s current cover. Time badly humiliated itself by implying that Yanela Sanchez, age 2, was separated from her mom. In fact, mother and child never were split. They are being detained together in Dilly, Texas. Getty Images photographer John Moore snapped Yanela’s photo on June 12, near McAllen, Texas, and — the Washington Post reported last week — “he speculated” that the little girl would be pried from her mother’s arms by Herr Trump’s Stormtroopers. That never happened. Had Getty or Time checked that basic fact, they would have avoided this enormous embarrassment.

A fact check, in fact, finds Señora Sanchez, not Mr. Trump, in the wrong. She took Yanela from Honduras without the permission of the little girl’s father. Rather than enter an official border crossing, Mrs. Sanchez rafted across the Rio Grande with a toddler. (What could go wrong?) She did not come to America to seek asylum from any particular hardship. She just wants a job. And she previously broke into America and was deported. Neither Sandra nor Yanela Sanchez is a viable poster girl for the Left’s family-separation narrative.

Whatever President Trump has done right or wrong in this scenario, the liberal impulse to blame America first and leave illegal aliens blameless has the left the Left deeply soiled.

Jim Geraghty
A Marine officer in the brig demonstrates the U.S. government’s twisted sense of ‘accountability’ for the calamitous withdrawal from Afghanistan.

Charles C. W. Cooke
There is a reason that parties with tiny legislative majorities do not usually try to remake the country.
View More
Loading...