Breaking through the Screen

We need to tackle both rising incarceration and declining marriage.

The first American celebration of Father’s Day commemorated a mining disaster that left over 1,000 children fatherless. At the time, in the early 1900s, it was very unusual for children to live without their dads: According to our analysis of census data, fewer than 8 percent of kids under ten lived in a household not including their biological or adoptive father (a category that excludes stepdads and foster parents). Today, that number is one in four. 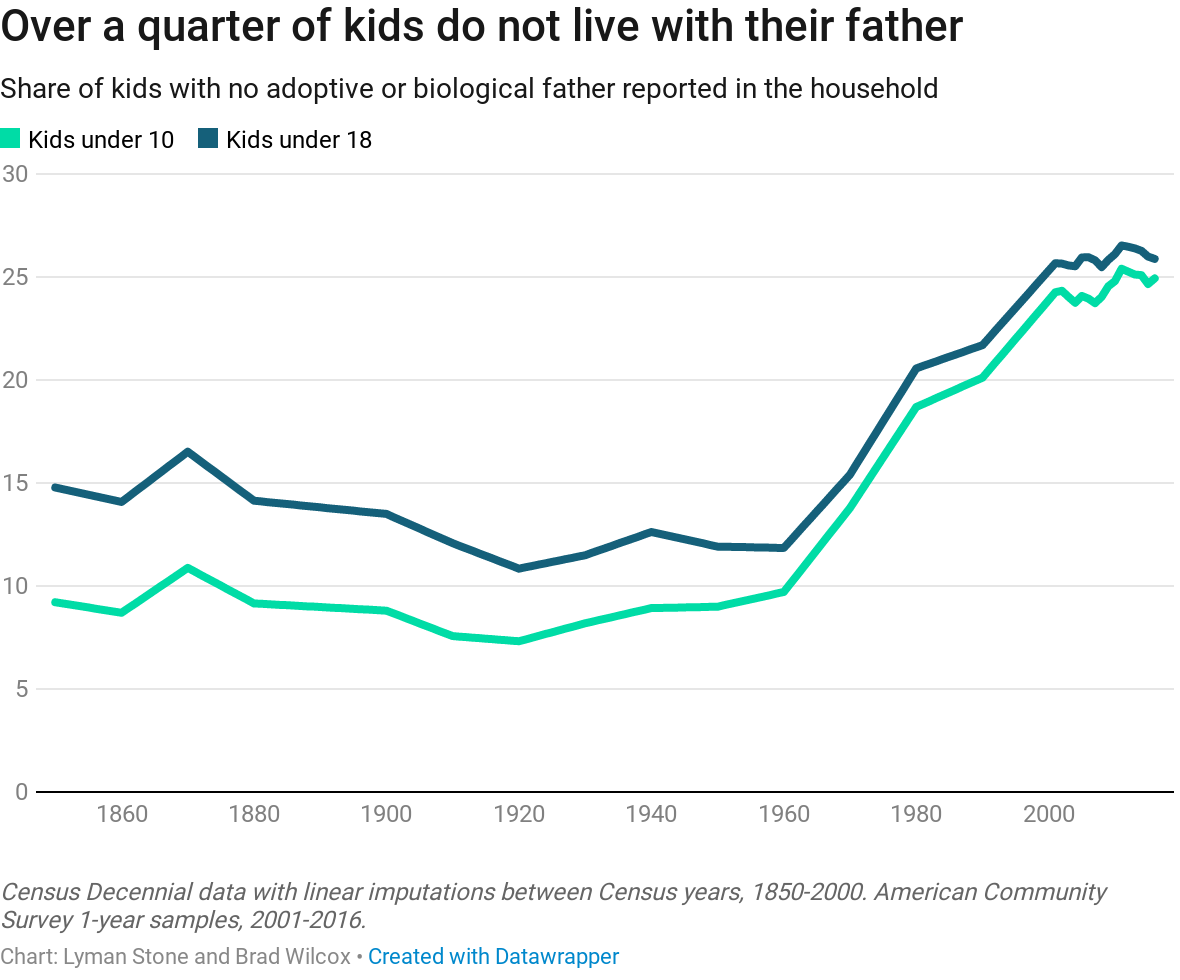 The primary driver of this trend is not a spike in male mortality like the Civil War (which caused the uptick you can see in the 1870 census above). Rather, its two main causes are more incarceration and less marriage.

Rising rates of fatherlessness have not affected all kids equally. For instance, the share of kids living apart from their dads varies widely by race or ethnic group, ranging from 57 percent for African Americans, to 28 percent for Hispanics, to 16 percent for non-Hispanic whites, to 10 percent for Asians.

One reason is that minority men are more likely to be incarcerated. As of 2016, only 0.4 percent of non-Hispanic white men over 15 were incarcerated, according to Justice Department data, versus 2.6 percent of minority males in the same age range. America’s overall incarceration rate more than quadrupled between 1980 and 2008 and has declined only slowly since.

Men in prison can’t be fathers in the household. These high rates of incarceration result in large numbers of separated families, and even when fathers are released from prison, ongoing supervision can make normal family life extremely challenging.

But incarceration rates aren’t the only driver of absentee fatherhood; marriage is another. Married fathers are more likely to live in the same household as their children, as compared with unmarried and especially divorced dads. And it matters whether kids live with their fathers, because when dads and their kids live together, they spend more time together. The difference is stark. 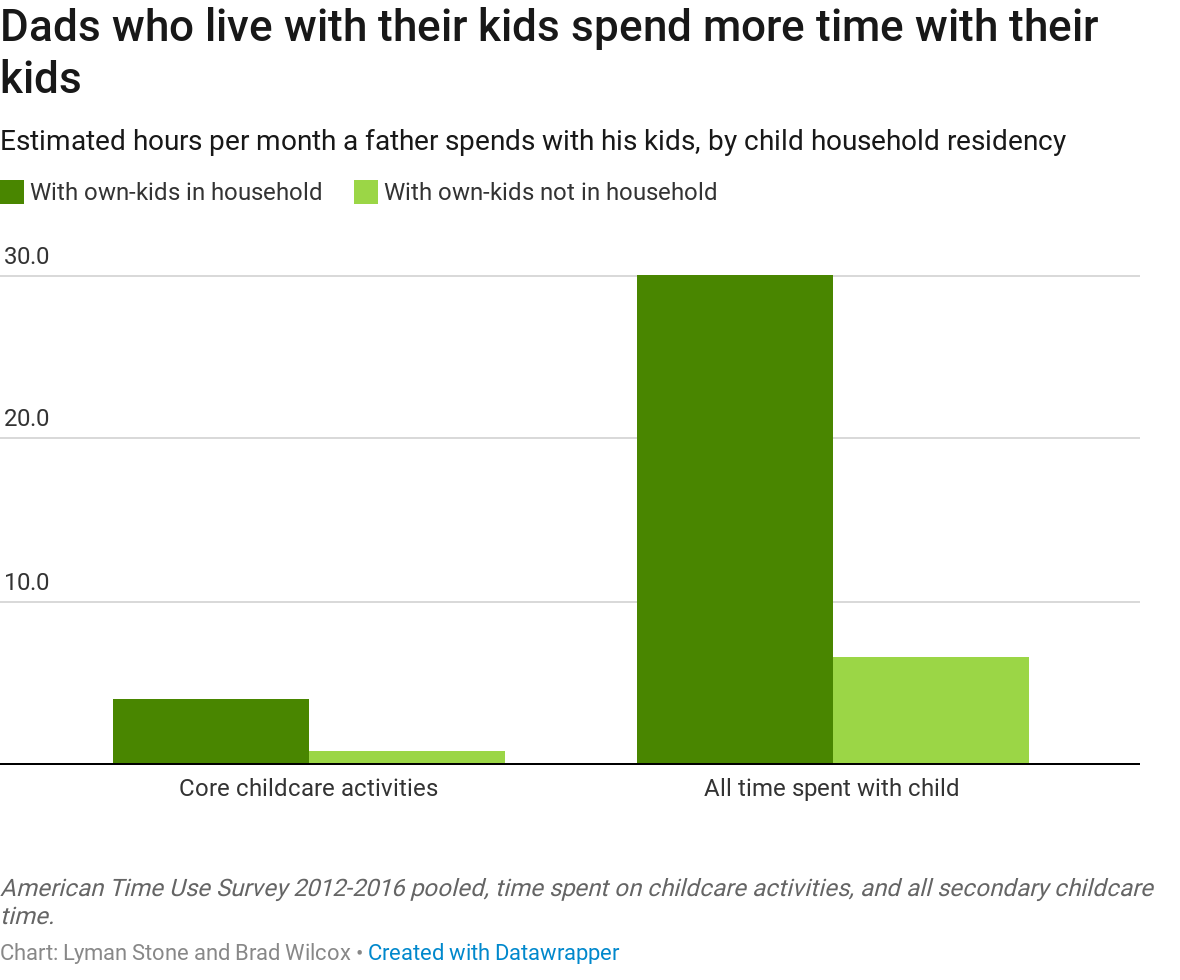 In the American Time Use Survey, dads who live with their kids report spending about five times as much time with those kids, whether that’s counted as core time spent on activities directly related to the child (such as playing baseball with them), or counted as time spent doing all activities while in the presence of their the child (such as cooking dinner). In other words, non-resident fathers are much more likely to be literally absent, with dramatically lower time spent with their kids. 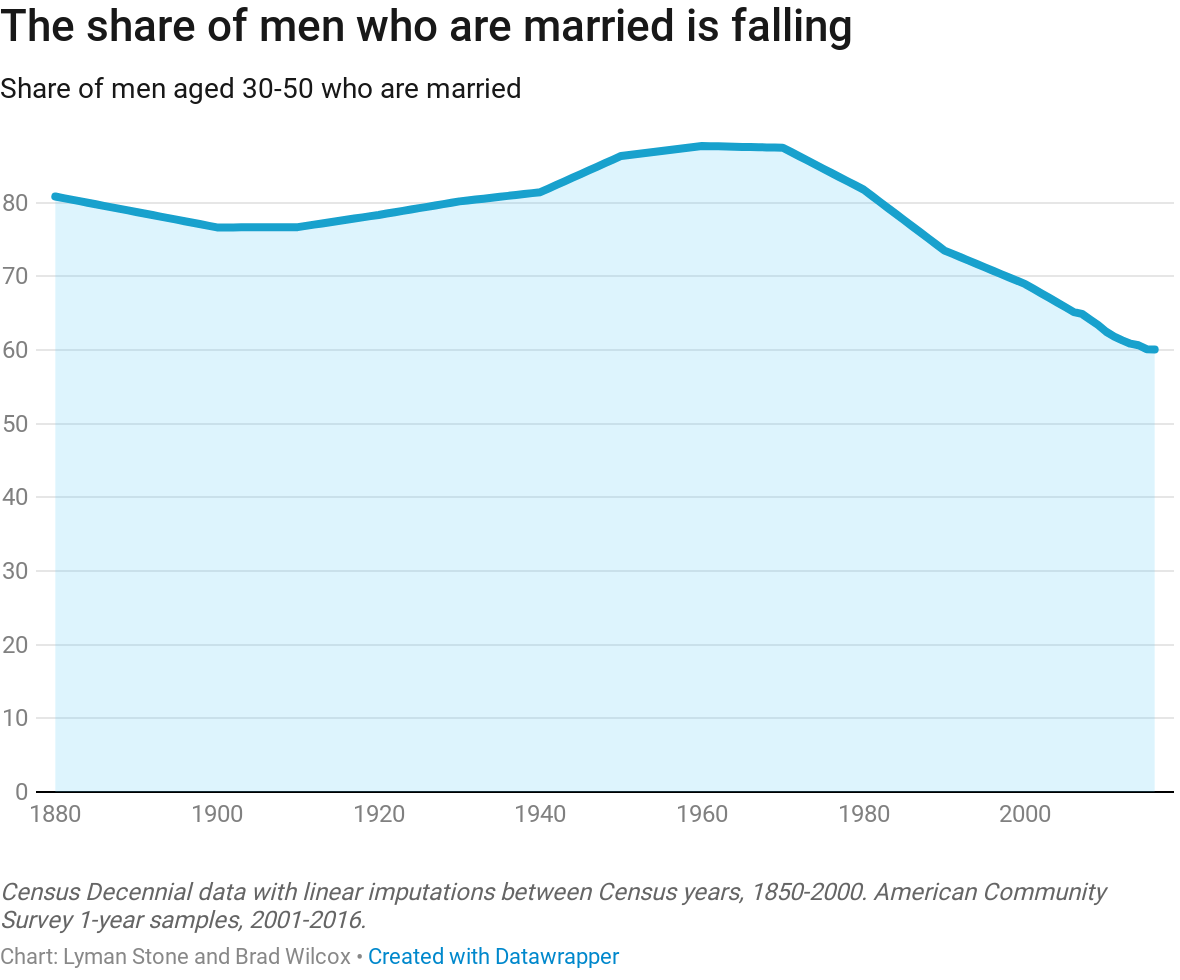 Men are getting married later in life, and thus spending a smaller and smaller share of their lives married. Reduced marriage reduces birth rates on the one hand, but because it leads to more children being born to unmarried parents, it also reduces the time dads spend with their kids among those children who are born.

Today, more than one in four children in the United States live apart from their dads, in no small part owing to declining marriage, rising nonmarital childbearing, more divorce, and increasing rates of incarceration. In other words, if we’re interested in promoting the bonds between dads and their kids, we need to tackle, from the left and the right, mass incarceration and America’s retreat from marriage.

Readers can download the data behind this piece here.

— Lyman Stone is a research fellow at the Institute for Family Studies and an international economist at the U.S. Department of Agriculture, where he forecasts cotton-market conditions. He blogs about migration, population dynamics, and regional economics at In a State of Migration. W. Bradford Wilcox is a visiting scholar at the American Enterprise Institute and a professor of sociology at the University of Virginia.

The balance of power in Europe shifted at Germany’s birth, as Katja Hoyer recounts in her history of it from its unification through the First World War.
Sean Durns

Our inaction signs the death warrants on those we pledged to protect. As a veteran with special-ops and intelligence experience, I have seen the evidence.
Annie Tiger

Rich Lowry
What the president’s Georgia voting speech lacked in facts, he tried to make up in hysteria.