This Day in Liberal Judicial Activism—September 26

Data from other cities suggest that the murder uptick that started in 2015 is tapering off.

Last weekend, 66 people were shot in Chicago, twelve fatally. This slaughter wasn’t carried out by the army or police but by civilians. The violence occurred on the south and west sides of the city, apparently with African-American perpetrators and victims.

Despite this shocking event, and contrary to our instinctual response to take more-drastic steps to avert such carnage in the future, the data do not suggest that we’re facing a crime wave. In fact, they indicate that the violence — believe it or not — is ebbing.

In a sense, as Tip O’Neill used to say about politics, all crime is local. So crime may rise in one city, fall in another. This is due to what are called “contagion effects,” where people, especially young people, copy one another. We see this with all sorts of behaviors, some of which are socially beneficial (enrolling in college), some neutral (getting tattooed), and some destructive (violent crime). If the mimicked behavior reaches a tipping point it will go viral (an apt phrase for contagions); if not, it will plateau at a much lower level.

Contagions can spread, of course, especially in an age of instant communication via social media. But they may also be confined to single cities. In other words, crime in Chicago may have no bearing on Milwaukee or Nashville.

The solutions are local, too. In the case of Chicago, the refusal of African-American youth to cooperate with the authorities is hampering the police’s ability to make arrests and creating impunity for some of the most violent criminals. Schools and community leaders in Chicago need to launch a “see something, say something” drive in black neighborhoods to counteract this anti-social custom. “Don’t snitch” may have deep roots in African-American communities (I’ve traced it back to the late 19th century, when police forces were all white, all male, and all bigoted), but this has little connection to today’s forces, which are often, like Chicago’s, headed by African Americans.

Whatever the case with Chicago, the national trends are encouraging. Look, for instance, at the ten biggest U.S. cities. We now have homicide figures for the first half of 2018 (via the FBI, police departments, and local media coverage) and can compare these with data from the same time period in the last eight years. We had crime spikes in 2012, 2016, and 2017. But 2018, at least so far, looks good. The ten-city total is down by 6 percent relative to last year. Not standing-ovation territory, but certainly the right direction. 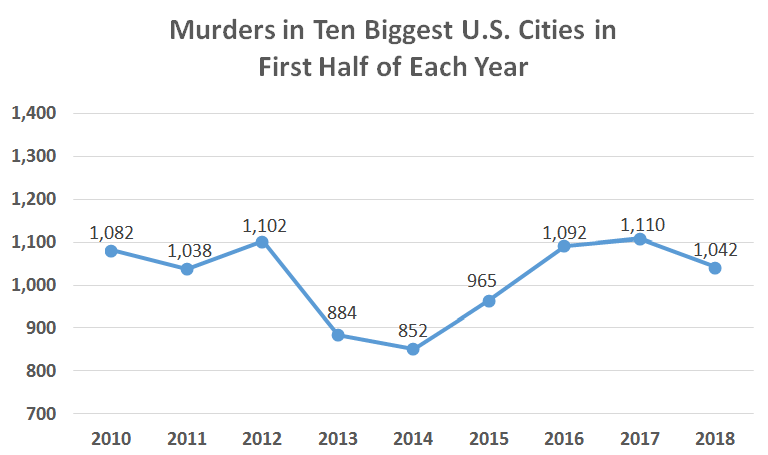 Another indicator is the trend in the cities red-flagged by criminologist Richard Rosenfeld when crime first rose between 2014 and 2015. Rosenfeld found that these ten cities alone accounted for nearly two-thirds of the increase in homicides nationwide. 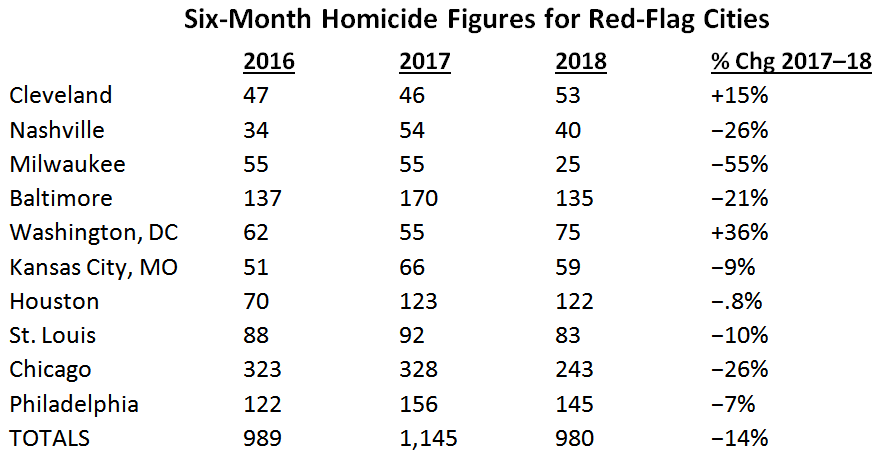 As you can see, in 2018 crime dropped in eight of ten of these red-flag cities, and cumulatively the decline was 14 percent.

What about the Big Apple? Regardless of scary reports that citywide shootings were up 16 percent in July, and that Bronx murders had risen by almost one-third, the long-term picture still looks good. There’s been an increase since last year — but last year was an unusually safe one. 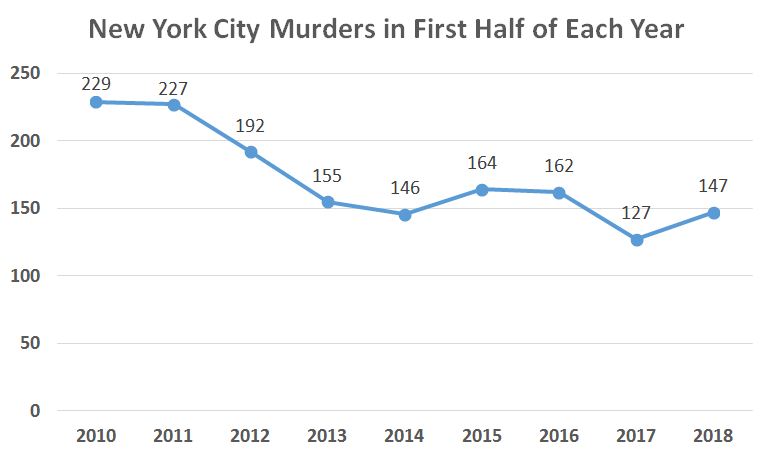 When crime first shot up in 2015 and 2016, I pointed out that there’s a big difference between a crime spike, which may last a few years, and a crime boom, such as the one this country suffered from the late 1960s to the early 1990s. I’m sticking to my story.

The fact is, the correlates associated with long-term crime waves, such as massive increases in young-male populations, migrations of groups with violent subcultures, pitifully weak criminal-justice systems, and armed gangs competing for drug territory, are not part of the current scene.

So, Chicago notwithstanding, I remain hopeful.

Louisianans Are Not Victims

Today, researchers spend nearly half their time on paperwork and administrative tasks, rather than research.
M. Anthony Mills