The Kavanaugh circus has made me think of 1991, of course, as it has many people: the showdown between Clarence Thomas and Anita Hill. Thomas’s indignation had a lot to do with saving that nomination. The words are unforgettable, but the spirit even more so, I think: Thomas’s righteous indignation. (Please bear in mind that “righteous” and “self-righteous” are two different things.) He fumed against “a high-tech lynching for uppity blacks.” That was an amazing thing to hear.

One reason a lot of us conservatives were so sensitive to the Thomas situation is that the Bork debacle — the Bork travesty — was not too far in the past: 1987. Those wounds were fresh, and when Thomas appeared in jeopardy, we said, “Here we go again.”

You know what Thomas said when his wife told him he had at last been confirmed by the Senate? He had drawn a bath. And so ticked was he by what he had been through, he said, “Whoop-dee-damn-doo.”

• On Twitter recently, some were circulating a Time-magazine cover from 1991. (See it here.) It showed Thomas and Hill and said, “Sex, Lies & Politics.” A little context: Just two years before, the movie Sex, Lies, and Videotape had been before the public. (Actually, they put the title in small letters: sex, lies, and videotape. That was new-fangled.) So the phrase, and rhythm, was in American ears.

• I highly recommend this piece from The Atlantic, by Caitlin Flanagan. It is extremely moving. What is outrageous, I believe, is the subheading: “When I was in high school, I faced my own Brett Kavanaugh.” This assumes Kavanaugh’s guilt, and makes his name a synonym for rapist, or sexual assailant. Certainly at this juncture, that is nothing like fair.

• In response to Republican complaints about how Brett Kavanaugh is being treated, some Democrats are saying, “Merrick Garland.” Okay. But remember: The Garland case was political (purely — or impurely). It was a matter of Republicans’ stalling for time, to see about the result of the 2016 presidential election. You may like that or dislike that — but no one impugned Garland’s integrity, so far as I’m aware.

• The world is now facing the worst refugee crisis since the end of World War II. And the United States is admitting the fewest refugees in 40 years. I have a great deal to say about this. This question goes to what we think of America: its purposes, its nature, its reason for being. But I will confine myself to a few thoughts, and a few links.

A concern for refugees used to be part of the conservative makeup. It was certainly that way when I joined up with conservatism, long ago. I think of Dusty Rhodes, the late president of National Review. He was part of just about every conservative cause you could think of: the Heritage Foundation, etc. Things that today’s Right would readily approve.

But he was also on the board of the International Rescue Committee. This is the organization founded at the urging of Einstein in 1933. Dusty cared a great deal about this organization and this cause. He traveled to Pakistan to see Afghan refugees and he traveled to Thailand to see Cambodian refugees.

What a guy, Dusty Rhodes. I loved him, and so did virtually everyone else who knew him.

Did you see this news item? It’s very American, really:

He’s a veteran state representative who has railed against immigrants “getting everything” at the expense of people born and raised in the state. She’s a 27-year-old former Afghan refugee making her first run for political office.

So when the tally from Tuesday’s Democratic primary in Concord, N.H., was announced, even Safiya Wazir said she was astounded.

In not many countries can a 27-year-old former refugee — and a woman — be elected to office (or simply run). Is this something to celebrate? Or something to resent?

Here is a report out of Budapest — where the leader, Viktor Orbán, presents himself as a champion of Christian civilization:

Hungary’s Central European University says it has been forced to suspend education programs for refugees and asylum seekers due to a new “immigration surtax” that took effect last week.

The Budapest-based university, founded by Hungarian-American billionaire George Soros, said Tuesday that the decision came due to uncertainty over how it would be legally and financially affected by the 25 percent levy imposed by the government on activities that it says assist immigration.

Some 55 refugees or asylum seekers were to take part in the CEU programs, launched in 2016.

Fifty-five. Just 55 people, who need a chance at a new life. Can’t have that, not in a Christian Nation like Orbánland.

God forbid you or I should ever need refuge.

One more report, out of Estonia: “From war in Syria to pastries in Tallinn.” We get a steady stream of stories that portray refugees in a negative light. It shouldn’t kill us to look at a positive story or two — just for semi-balance.

• All right, what about our friend Julian Assange, that fearless warrior for truth, justice, and the American way? Or some way. Apparently, the Kremlin had a plan to spirit him away to Russia on Christmas Eve last year. (How poetic.) But the plan went awry. Also, Ecuador had a plan to make Assange a diplomat in Russia. (Assange has been a long-term guest at the Ecuadorean embassy in London, remember.) But that plan, too, went awry.

You know what the name of Ecuador’s president is? This is good: Lenín Moreno.

• On the subject: Have a headline: “Hitler v Lennin: Peru mayoral election is a historical showdown.” I’ll say. (Article here.)

And, I say, in a Thoreauvian spirit: Why isn’t your organization attacked by the Kremlin?

(For a report on the attacks against the Henry Jackson Society, go here.)

• Why are you a conservative (if you are)? You probably have dozens of reasons, as I do. But opposition to this new policy in Alameda, Calif., is one of the reasons. See if you know what I mean, without my spelling it out (although it’s my job, in part, to be a speller-out):

The relaxed new dress code at public schools in the small city of Alameda, across the bay from San Francisco, is intentionally specific: Midriff-baring shirts are acceptable attire, so are tank tops with spaghetti straps and other once-banned items like micro-mini skirts and short shorts.

As students settle into the new school term, gone are restrictions on ripped jeans and hoodies in class. If students want to come to school in pajamas, that’s OK, too.

The new policy amounts to a sweeping reversal of the modern school dress code and makes Alameda the latest school district in the country to adopt a more permissive policy it says is less sexist.


• Another item related to dress? Or non-dress? “Plants, but no pants: Florida man gardens in the nude.” The article is here — and its last sentence reads, “Neighbor Aimee Canterbury says she’s just taught her six kids to look the other way if the neighbor is naked.”

• You’ve heard of Naomi Osaka, who stomped Serena Williams to win the U.S. Open (tennis, of course — not golf). Naomi is 20 years old. Being half Japanese and half Haitian, she is constantly asked about her identity: What is she? “I don’t know,” she said recently. “I just think of myself as me.”

What a great thing to be.

• Kevin Williamson alerted me to a “Great American Name,” as he put it — a byline in the Los Angeles Times: that of Caitlin Yoshiko Kandil. Of the three parts of that name, Kevin remarks, “One neo-English, one Japanese, one Arabic.”

A beautiful name, as well as a great American one.

• My sister sent me this link. The headline reads, “If names made champions, these Big Ten players would be unstoppable.” I think my favorite is “Isaiahh Loudermilk.” If it’s not “Dicaprio Bootle.” As the author of the article, Kyle Austin, remarks, “He’s got the first name of a famous actor and a last name that’s just a joy to say.”

• Last week, I was in Miami, to report on a congressional race there, do a podcast with Jeb Bush, etc. Does this pic not say South Florida, a bit? 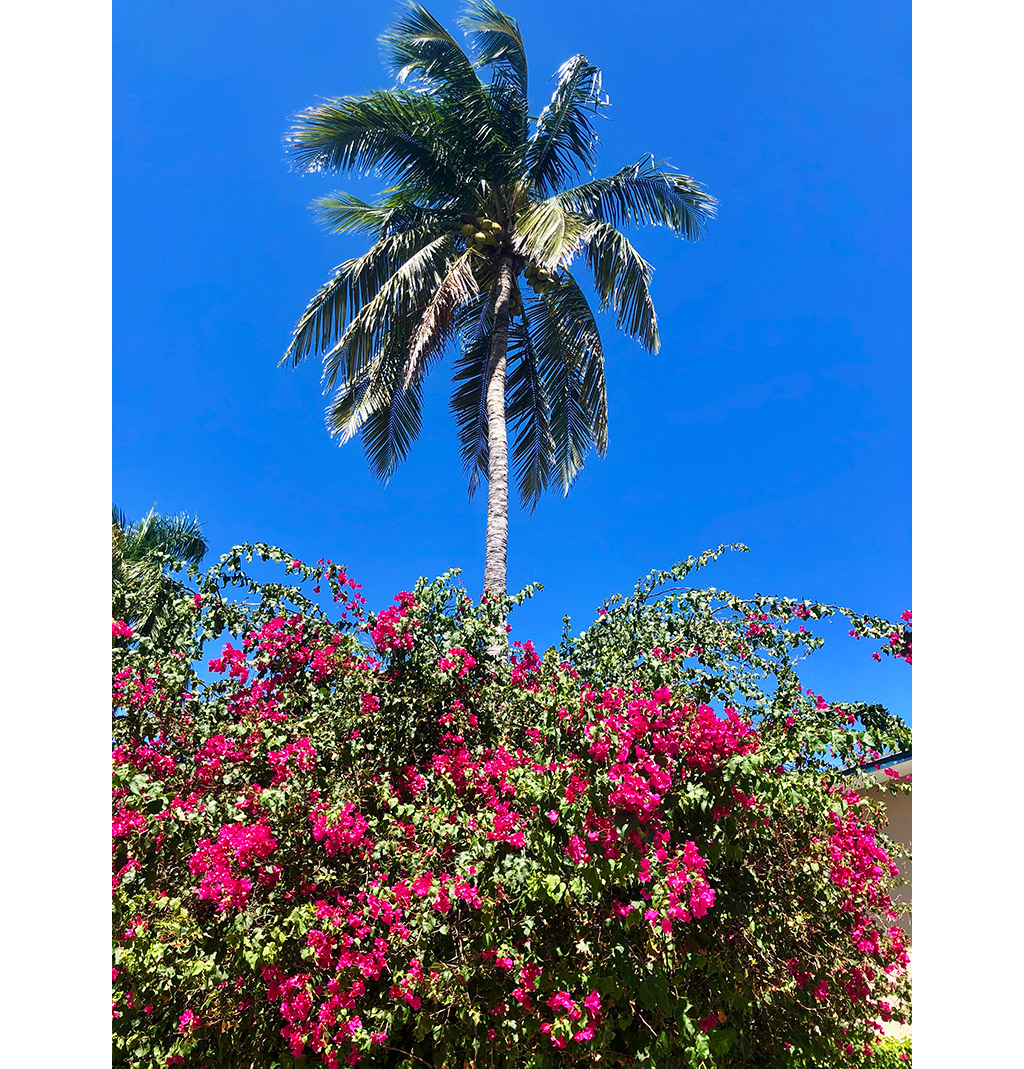 How about this tree in Coral Gables? They all look like Old Man Methuselah. 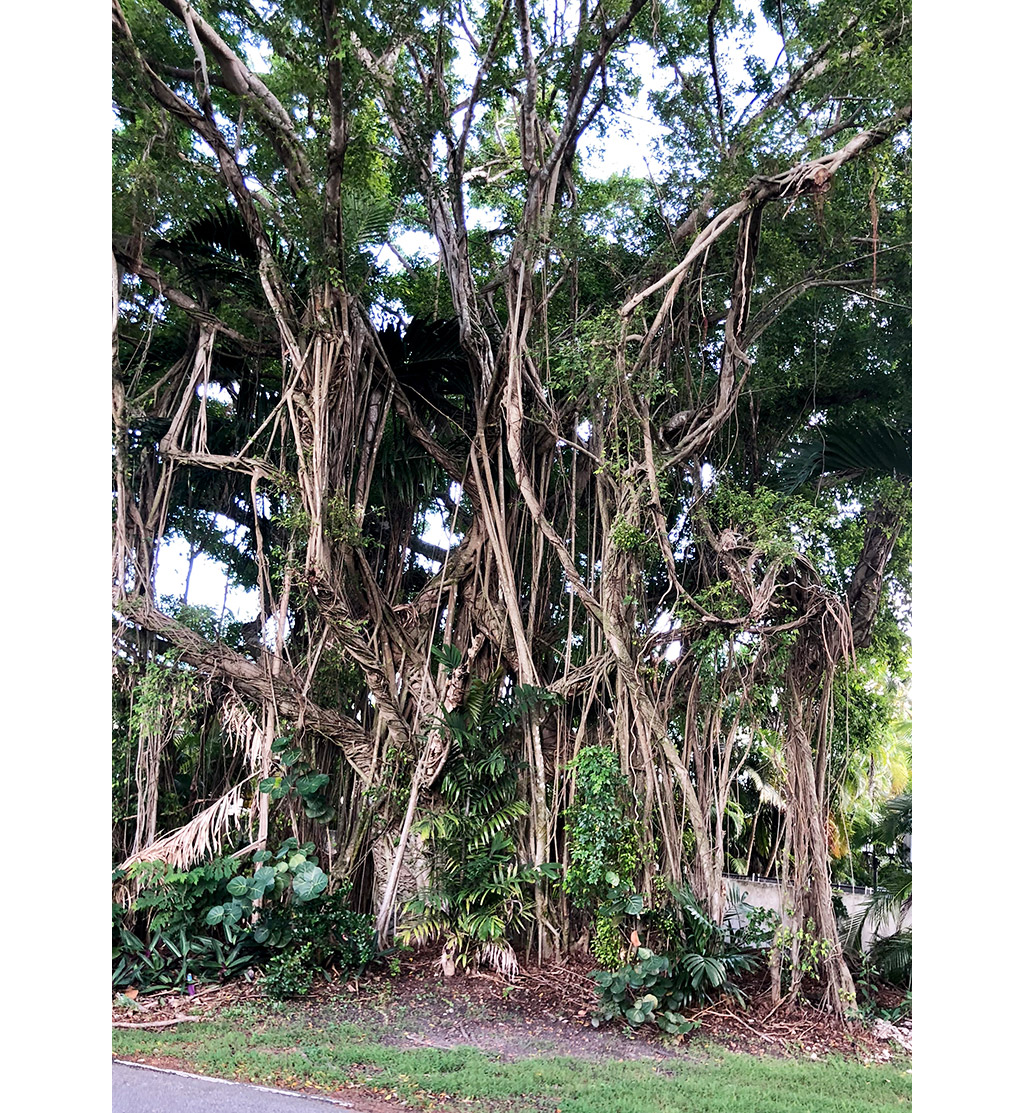 And I believe this is one of my favorite names of any establishment:

• Care for some music? This is a review of Opening Night at the Metropolitan Opera — a performance of Samson and Delilah. This is a post on one of the opening concerts of the New York Philharmonic.

The conductor, Jaap van Zweden, launched into an encore: “The Ride of the Valkyries.” A man muttered to his wife, “Flight of the Bumblebee.” Well, the “Ride” does have a buzzy beginning!

• Let’s do a little golf — a little Tiger. He wasn’t supposed to win again, according to many (including himself?). But he did last week: the final tournament of the season, the Tour Championship. Tiger is now 42 years old. Let’s review a little bit.

He was the greatest junior golfer and the greatest amateur golfer in history, by a lot. Then he turned pro. Up to the autumn of 2009, he won 71 tournaments, including 14 majors. Then his personal life crashed around him, and his golf game followed suit.

In 2012 and 2013, he had a comeback, winning eight tournaments. His total stood at 79, bettered only by Sam Snead, who won 82. (Jack Nicklaus is third, with 73.) Woods went south again, with injury after injury, and surgery after surgery. He could barely walk. Would he ever play again (to say nothing of win)? Would he play even casually, with his kids or friends?

And I’ll tell you this: If he wins one major, he might win another — and another. A kind of dam — a mental dam — might break.

• I was watching University Challenge, the British quiz show. These kids knew everything — I mean, everything under the sun, even the most esoteric. It was astonishing, the breadth of knowledge. But they whiffed on an easy question about the Lord’s Prayer.

Say a pray for our world, y’all. See you later.

The week of November 29: oil, climate, infrastructure, and much, much more.
Andrew Stuttaford

The network fired Cuomo for leaning on contacts in the media business to help his brother Andrew navigate his own sexual-harassment scandal.
Brittany Bernstein

What to make of the Missouri senator’s attempt to recover the masculine ideal
Harvey C. Mansfield