The Urge to Punish

Today’s boom is a triumph of Trumponomics.

Addressing students on September 7 at the University of Illinois in Urbana, Obama said: “When you hear how great the economy is doing right now, let’s just remember when this recovery started.”

By trying to claim credit for today’s economic boom, Obama has conceded that America is not enduring the “Armageddon” that Representative Nancy Pelosi (D., Calif.) predicted as the Trump/GOP tax cuts were passed, amid the “No!” votes of every congressional Democrat. That alone is a Republican gain.

Obama is correct that, on his watch, the U.S. economy did go back into drive, after conking out during the global financial meltdown and Great Recession that defined the last two years of George W. Bush’s presidency. This mess was due, largely, to easy money pumped out by the Federal Reserve; Fannie Mae, Freddie Mac, and private banks lending to virtually any applicant with a pulse and a pen; the Mortgages for All mentality of Bill Clinton’s Community Reinvestment Act; and easy borrowing by too many Americans whose real-estate aspirations eventually outran their incomes. The whole McMansion went up in flames, with nominally Republican Bush dousing the fire with distinctly non-Republican solutions: Massive spending, corporate rescues, and full-on nationalization of some companies.

“It began with the $830 billion stimulus plan, and then Cash for Clunkers, bailouts, Obamacare, tax hikes on the rich, minimum-wage hikes, and a wave of financial and economic regulation,” Heritage Foundation senior fellow Stephen Moore wrote in the September 12 New York Post. “All told, the national debt nearly doubled in eight years.” To be precise, the national debt was $10.6 trillion at Obama’s first inaugural. It was $19.9 trillion as Marine One whisked Obama out of town for the last time. Relieved Trump supporters on Capitol Hill screamed with joy after the new president took command, and his predecessor flew away with his chief legacy intact: an 88 percent boost in federal red ink.

All this extravagance got the national vehicle back on the road after Bush stalled it . . . but, alas, with Obama at the wheel. He drove with one foot on the gas and the other on the brakes.

According to the Congressional Joint Economic Committee’s 2015 analysis of the last eight recessions and their aftermaths, “the Obama recovery was the weakest on record.”

Indeed, across his two terms, Obama’s annual GDP growth averaged a low-energy 2.1 percent. By 2016, Obama had taxed, regulated, Obamacared, and lectured businesses down to an annual expansion of just 1.9 percent. Nonetheless, Obama wants a standing ovation for chauffeuring America down the freeway for eight years in a sputtering, backfiring jalopy . . . at 35 miles per hour.

And then something major happened: Donald J. Trump got elected. 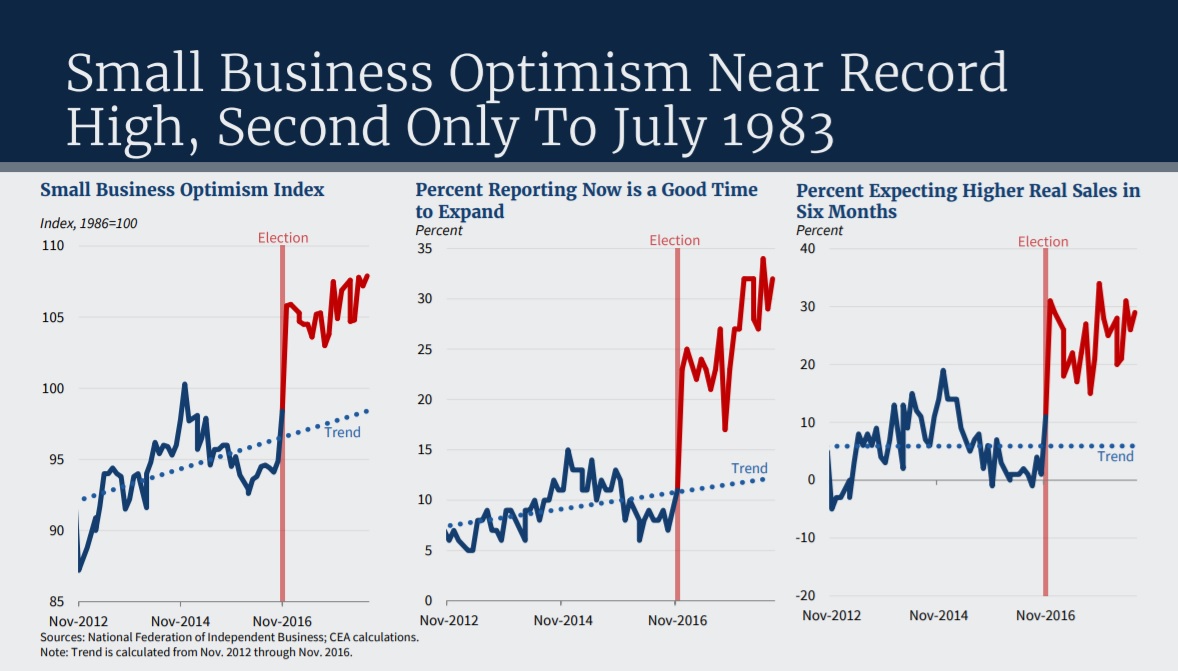 As Kevin Hassett, the chairman of the Council of Economic Advisers, educated the White House press corps last week, things started picking up as soon as Hillary lost and Trump won — well before he took the oath of office.

“If you look at what happened the moment President Trump was elected — both in equity markets and in sentiment surveys — is that people started to ratchet up their expectations for what would happen to the economy,” Hassett said. “Perhaps, you know, everybody, except for Mrs. Clinton’s supporters, was starting to do that right after the election. And the fact is that those expectations turned out to be rational because the turnaround that they expected is something that we see,” he added.

Hassett calmly and cheerfully presented several charts that landed like tactical nuclear weapons atop the notion that today’s economy is Obama’s. Under Obama, multiple growth curves dropped like falling tennis balls. Then, as soon as Election Day 2016 hit, they bounced right back up and are now climbing skyward. Hassett demonstrated this Trump Effect on entrepreneurial enthusiasm, higher sales expectations, investment in equipment, capital-goods orders, equipment shipments, and other metrics.

“I can promise you that economic historians will 100 percent accept the fact that there was an inflection at the election of Donald Trump, and that a whole bunch of data items started heading north,” Hassett predicted. 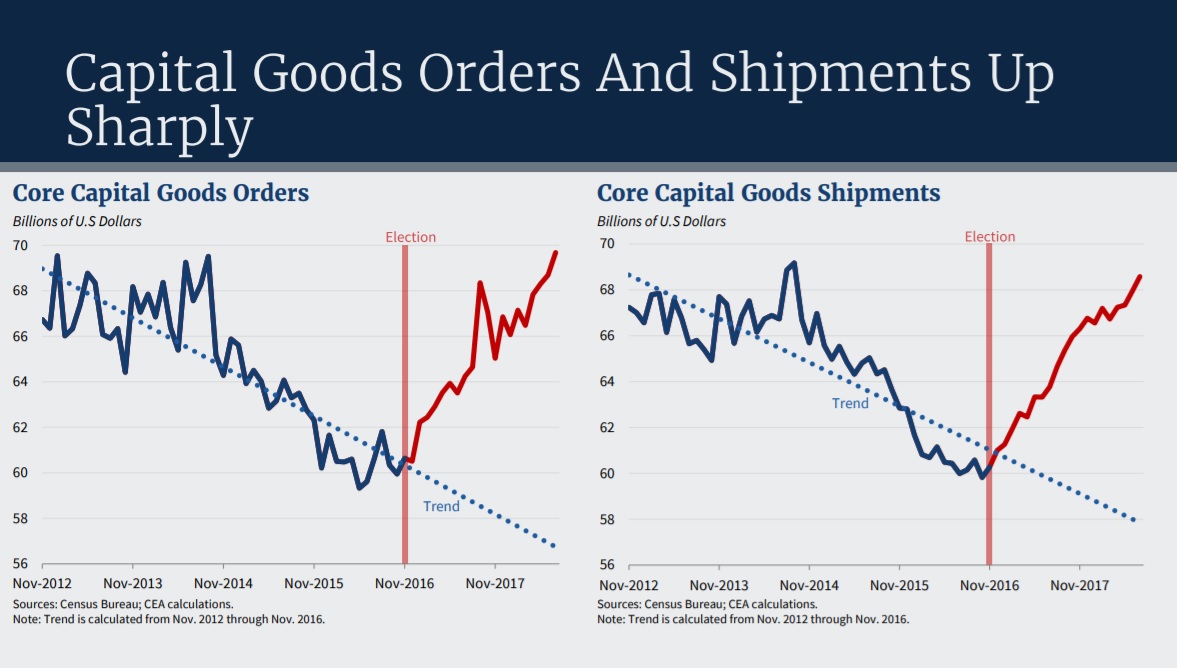 “Trump has elevated growth to 3 percent on an annual rate, and the latest projections are that the growth rate for the second and third quarter (which ends September 30) will be over 4 percent,” Steve Moore explained. “One might say all it took to get the economy really crackling was getting Obama out of office.”

“Our system was choking,” Trump recalled via Twitter: “I opened up our beautiful economic engine with Regulation and Tax Cuts.”

Indeed, the pro-expansion policies of the Trump White House and Republican Congress quickly generated phenomenally positive results, some seldom or never seen before. Among much such evidence:

Speaking of manufacturing, Obama predicted on PBS Newshour on June 1, 2016: “Some of those jobs from the past are not going to come back.”

In fact, comparing August 2016 (under Obama) and August 2018 (under Trump), the U.S. economy created 1,017,100 new blue-collar jobs, as employees returned to factories, mines, and construction sites, mainly since Trump’s upset victory. Between July 2017 and July 2018 alone, according to the Washington Post, 656,000 new goods-producing jobs emerged as America went back to work. That period witnessed the fastest pace of such employment growth since 1984 — the year President Reagan was reelected.

After eight years of crawling forward, Obama abandoned his battered clunker in front of Trump Tower.

Now, Donald J. Trump steers an 18-month-old sports car. Its speedometer currently reads 4.2 percent GDP growth for 2018’s second quarter — a metaphorical 70 miles per hour. Thanks to President Trump, the Republican party, and its policies and leaders, America once again zooms along. And the open road lies ahead.