‘They Need to Up Their Game’: Daylight between U.S. and Ukraine ahead of Anticipated Russian Attack

How China Is Trying to Turn the U.S. against Itself

All Major Sports Leagues Should Prepare to Pull Out of China

Julian Assange, the WikiLeaks guy, Putin’s friend, is a difficult person. He must be an exceptionally difficult houseguest. He has been a guest of the Ecuadorean embassy in London since 2012. You know the old saying: “Guests are like fish. They start to stink after three days.”

Speaking of which: It must be gettin’ pretty gamey in that embassy. And the Ecuadoreans are acting like parents, where their charge is concerned. They have told Assange to keep the bathroom clean. And to look after his cat. (Otherwise, said animal will be taken to a shelter.) And to watch what he does on the Internet. (Otherwise he will be cut off, as he has been in the past.)

This information has been leaked, which is fitting, given that we’re talking about the maestro of WikiLeaks. To read an Associated Press report, go here.

• In Moscow, before seeing Putin, John Bolton, the national-security adviser, laid a wreath on the spot where Boris Nemtsov was murdered. This restores some honor — some U.S. honor in the matter of Russia.

• “License to Kill.” This is the title of an article by Larry Diamond, the democracy expert and advocate, published at The American Interest. Who has this license? The Saudi dictatorship, of course. And Putin’s. And Kagame’s (Rwanda). And others. I recommend it. (Not the killing, but the article.)

Naturally, these killers kill at home — but Diamond is talking principally about their killing of critics abroad.

• Last month, Emmanuel Macron, the president of France, appeared at a Gates Foundation event in New York. “I always say,” he said, “‘Present me the woman who decided, being perfectly educated, to have seven, eight, or nine children. Please present me with the young girl who decided to leave school at ten in order to be married at twelve.’”

I will now quote the Washington Post, which reported,

About a minute after his first comment, Macron clarified that he was talking about women in impoverished and isolated communities who start childbearing at very young ages, not about Western women who choose to have many children for religious or other reasons.

Nevertheless, many women in our country — especially conservatives — reacted sharply to Macron. I understand them, entirely. We are tired of being knocked for our large families. And women are sick of being told that they are not with-it, somehow, if they have a lot of children.

But people are very quick to take offense. Indeed, there are professional offense-takers. We conservatives have knocked the Left for this for many years. We joke about “the Church of Perpetual Grievance.” There is so much to take offense to — I mean, legitimate offense. There is no need to pull the trigger on comments such as Macron’s.

In Africa and elsewhere, girls and women have no choice. They are forced to leave school, if they were ever allowed to attend in the first place, and forced into marriage and childbearing. That’s what Macron was talking about, and he is right to decry it.

• I’ve never liked it when people say, “Your political views, and your words, led to this violent act” — this murder, most commonly. I have written about this over and over: here, for example. The post I have linked to is headed “Again and Again.”

And yet and yet: If you portray someone as the Enemy of Mankind, without cease; if you build someone up as Emmanuel Goldstein (the bogeyman in 1984) — someone may get the idea that he should off Goldstein.

I thought of this when reading this story, headed “At George Soros’s Home in N.Y. Suburb, Explosive Device Found in Mailbox.”

• So, in Canada, they’re now free to smoke pot — legally, I mean. What will this do to the famous Canadian politeness and niceness (hockey aside)? Anything? I would hate to see the Canadian character altered, because I have long admired it.

By the way, Bill Buckley once said, “The nicest people in the world are Nova Scotians and New Zealanders.”

• On this matter of “Horseface” — I’ve got something to tell you, chillen. It’s a universal truth, as old as time. Men don’t call women things like this when they’re pursuing them sexually. Later, when things go wrong, they denigrate their looks.

Have you ever noticed?

• During the Michigan–Michigan State game, I tweeted the below, out of frustration:

I’ve often said that opera intermissions are too numerous and too long. You lose the flow of the piece. The same is true in sports, and certainly in college football — especially when a game is televised. I mean, it’s just endless stop-start, and it grows tedious.

(Incidentally, I once began a review, “There was a series of intermissions last night, punctuated by a performance of Aida.”)

Dave Taggart, of Calhoun, Ga., sent me this marvelous analysis and summary:

Watching on TV, halftime is also too long. The kitchen and the bathroom are just steps away. At the game, halftime is too short, because there are lines at the restroom and concession stand.

• Kevin Williamson alerted me to this extraordinary item, from Gucci: a sweater, or jumper, as the British say, reading, “Never Marry a Mitford.” Words to live by. They tend to be Nazis, Communists, or otherwise problematic. (Fun, too, for a while, no doubt.)

• In social media, I spotted a marvelous quotation from Eric Voegelin (the political philosopher, born in Germany, escaping to America in 1938, just in time): “No one is obliged to take part in the spiritual crises of society; on the contrary, everyone is obliged to avoid the folly and live his life in order.”

• A little fun with names? I was watching the Michigan–Michigan State game, as I mentioned, and I thought I heard “Ralph Vaughan Williams.”

Now, the Michigan State Spartans have a defensive tackle named Raequan Williams. The announcer pronounced it “RAY-kwon Williams” — which sounded a lot like “Ralph Vaughan Williams.”


Was I the only one who thought this? No — at least one other did, because he wrote to tell me so.

Which was kind of nice.

• Here is an obit from the New York Times: “Felix Smith, Who Piloted Covert Flights Over Asia, Is Dead at 100.” Amazing man, amazing life. I want to highlight this:

Mr. Smith was rejected for pilot training by an Army doctor because of his eyesight but appealed to his draft board. (“Appeal?” the board chairman asked incredulously. “That’s for guys who’re trying to stay out.”)

I loved that: “That’s for guys who’re trying to stay out.”

• The other day, I mentioned Clay Kershaw, the great Dodgers pitcher, on a podcast. A reader informed me, “His late father, Chris, was a professional musician in Dallas.” The reader is in a chorus that sang one of Chris Kershaw’s arrangements.

Evidently, Chris Kershaw was a remarkable man. I enjoyed reading his obit, here — though I’m sorry it was his obit, if you know what I mean.

• Come with me to Carnegie Hall, last week. It’s intermission. An elderly New York lady is heading up the aisle, with her husband. Now, try to imagine this in a classic New York accent: “My eyes are getting weaker. [Beat.] I blame Kavanaugh.” Then she giggles, laughing at herself a little.

I wish I had a recording for you.

• The lady and her husband were attending a piano recital by Igor Levit, in the basement hall of the general Carnegie building, Zankel Hall. For my review, go here.

• Whenever I praise California, people say to me, “Don’t you know about the problems, man? The illegals, man? Like, the taxes, man? All the people leaving?” I know, I know. And yet . . . there are other aspects to notice.

Whenever I praise Chicago, people say, “Don’t you know about the problems, man? Like, the crime, man? Like, Rahm Emanuel and the Democratic machine?” Etc., etc. I know, I know. And yet . . .

What a magnificent city, Chicago. For all its problems, it’s still got it, for me. The thrill of Chicago has never worn off, for me.

Have a pic, taken last week: 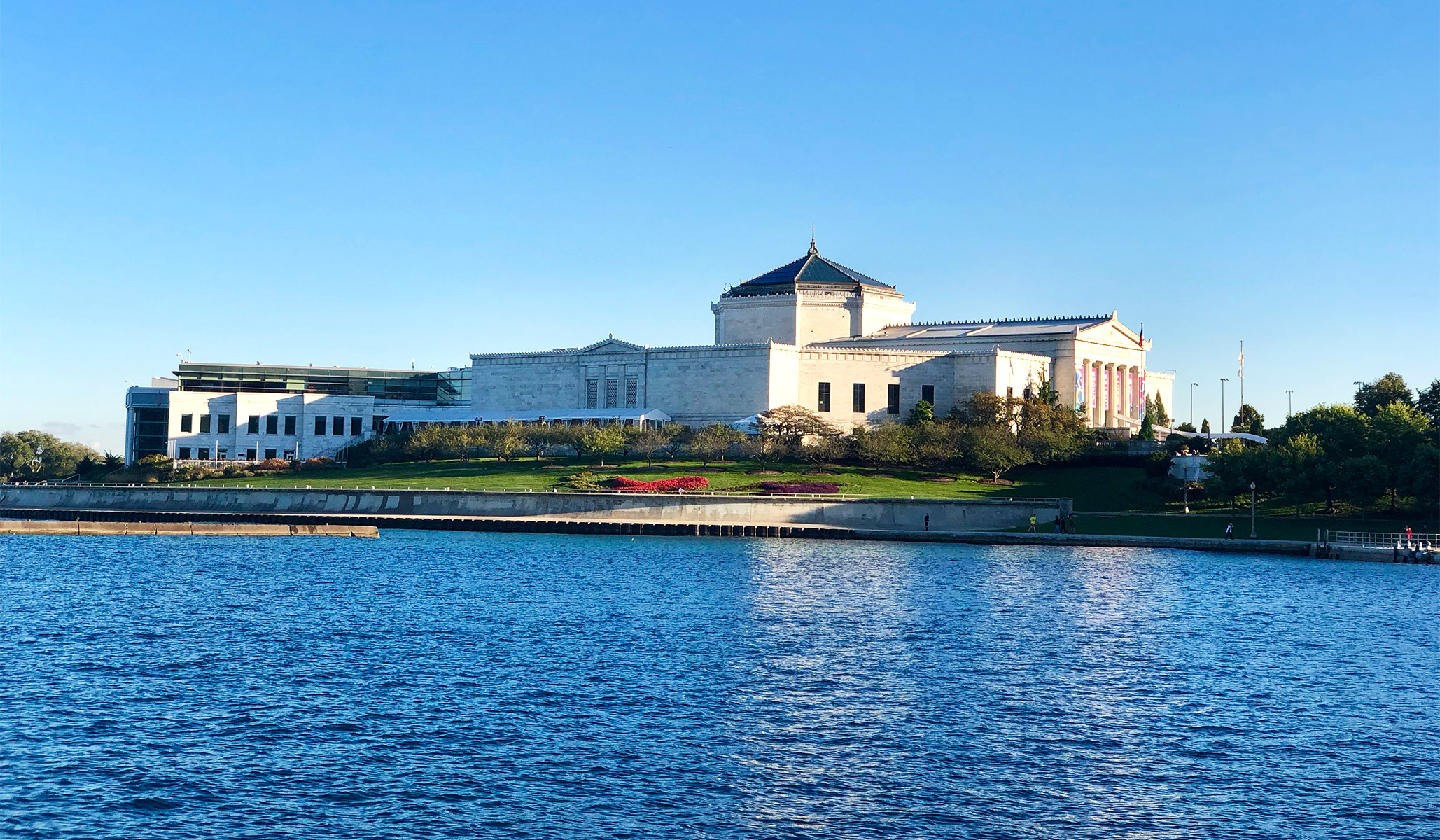 You know what? The Sears Tower will always be “the Sears Tower” for me, I’m afraid. I can’t make my mouth say anything else. Same with “Mount McKinley.” Same with “Mormon Tabernacle Choir.” (They’ve just changed.) (I once wrote an essay on this subject, here.) 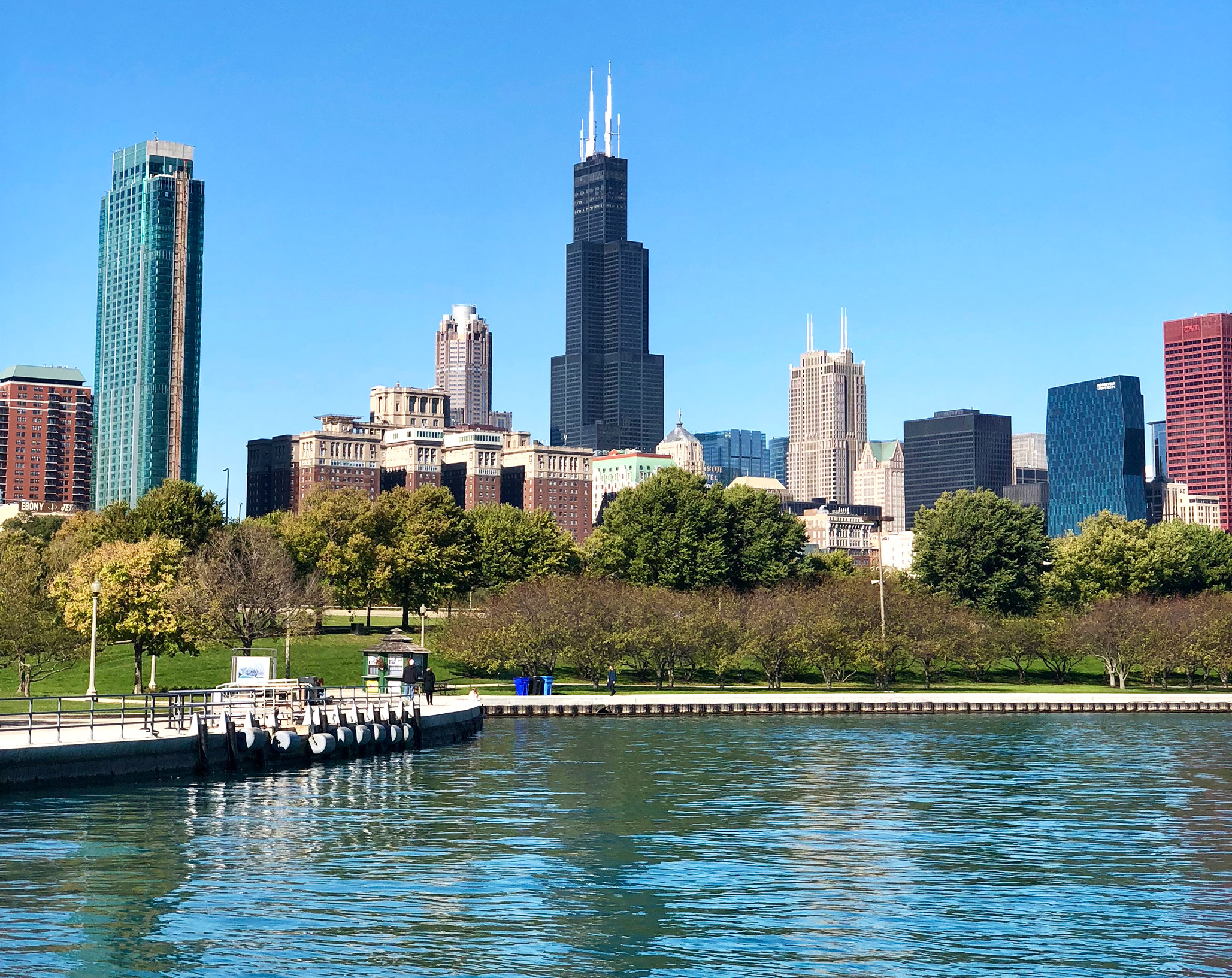 I love this classic Elgin clock, surely made in Elgin, Ill., about 40 miles northwest of Chicago. This one is on a building near Chicago’s Greektown. It speaks to me of a solid period in America, and of the Midwest (my native region). (By the way, I once worked in Elgin as a summer-camp counselor.) Toward the bottom of the clock are the words Central Time. 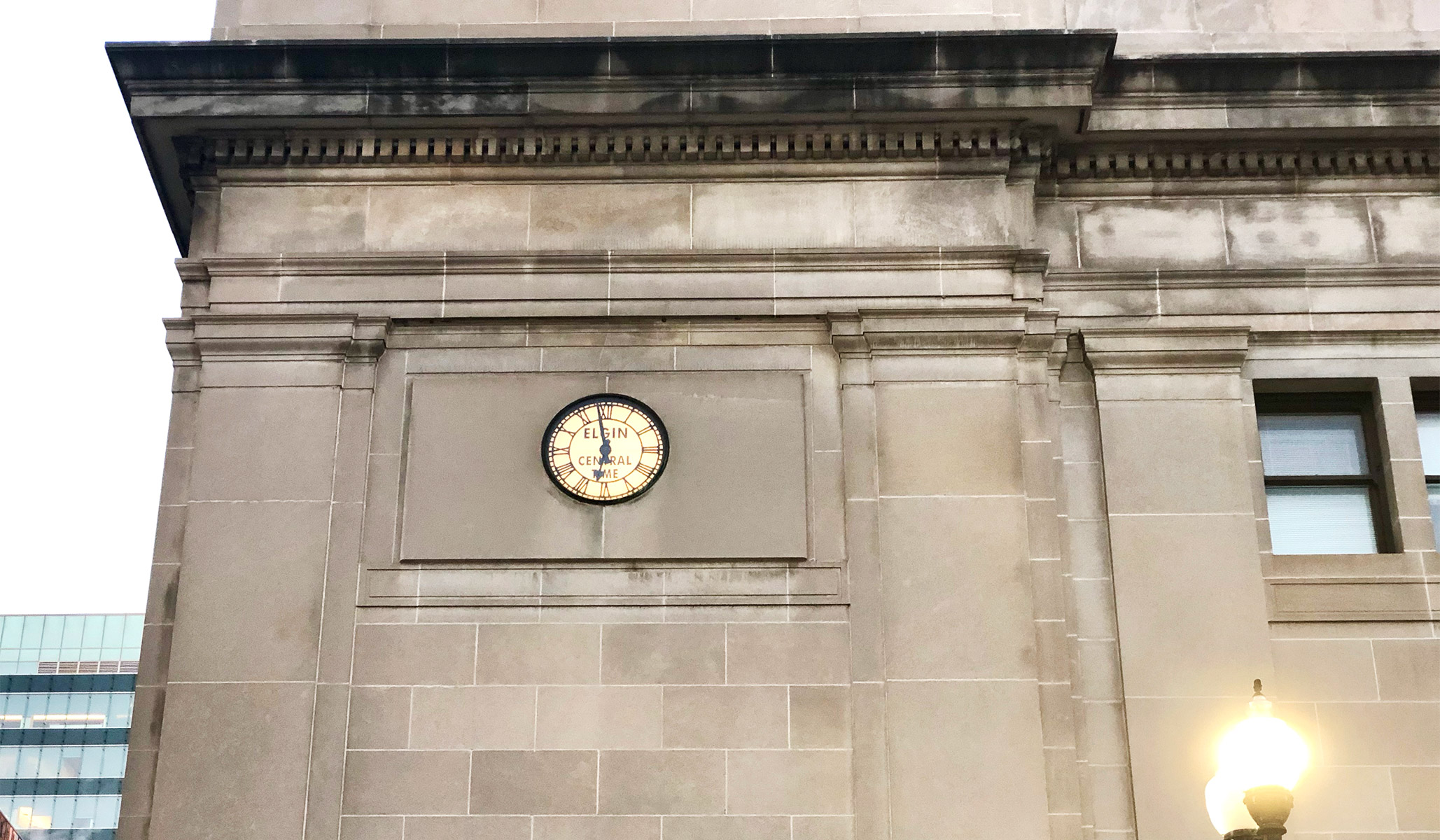 This is Chicago’s Orchestra Hall. On its façade are written five names, constituting a pantheon: Bach Mozart Beethoven Schubert Wagner. 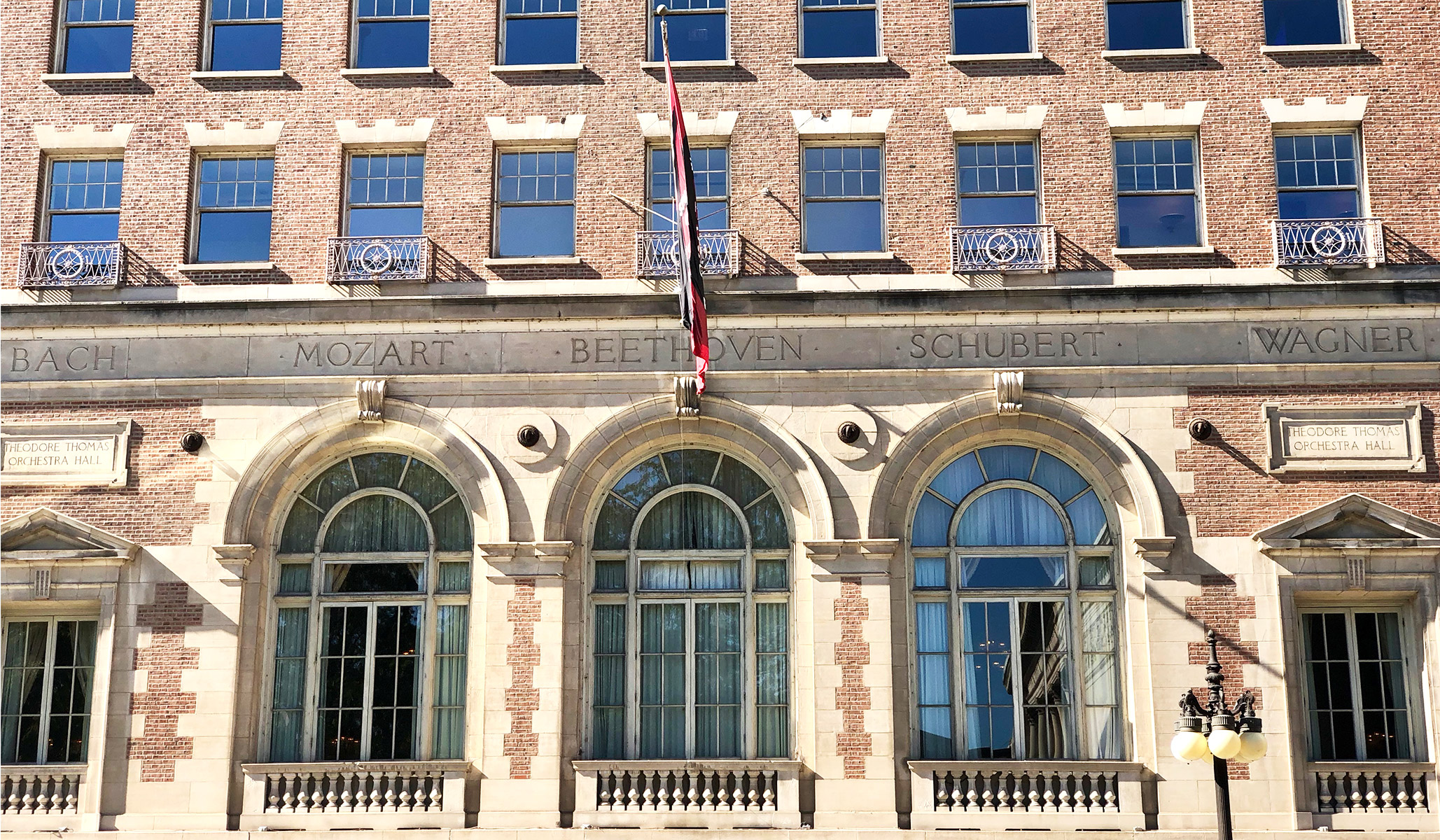 Thanks for joining me, Impromptusites, and see you soon.

You can save money every day without fighting over TVs.
Dominic Pino

In a guidebook titled ‘Let's Talk About Racism,’ the Christian charity tells members to rectify their contributions to prejudicial systems.
Caroline Downey

Kyle Smith
A Q & A with surly pupils.