Entitlement cuts, tax increases, howling seniors: This is our future, whenever we choose to face it.

The Manhattan Institute’s Brian Riedl isn’t trying to trigger the libs. His new plan to stabilize the debt doesn’t gut welfare, doesn’t repeal the New Deal — hell, it doesn’t even keep tax increases off the table, which practically makes him a lefty pariah in modern GOP circles.

But it’s still going to alienate just about every elected official across the political spectrum, because it illustrates what it would actually take to get our mushrooming deficits under control. We’re talking weaker Social Security benefits, a total overhaul of Medicare, cuts in Medicaid subsidies to the states, and, yes, tax hikes to boot.

Riedl writes that if we don’t enact reforms like these soon, we could face a debt crisis down the line. My bet is that our politicians will take the risk.

Here’s a chart showing our debt as a percentage of our gross domestic product, as projected currently and under Riedl’s plan: 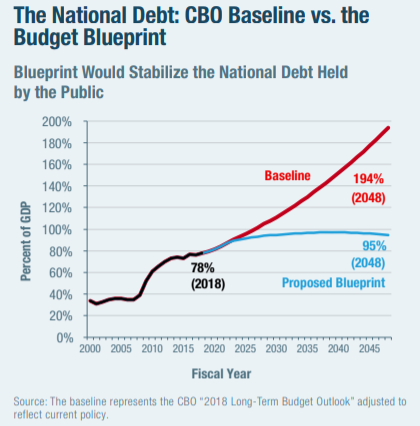 The explosion of debt expected under the status quo? That’s because the Baby Boomers have started to retire and are going to cash in their magical Social Security and Medicare tokens over the next few decades. The blue line? That’s the plan to stabilize the debt at 95 percent of GDP, which means cutting it roughly in half from what it would otherwise be 30 years from now. Even then, we would run a deficit every year, but the debt would grow at the same rate as GDP, maintaining a constant ratio. (Spending is stabilized at 23.3 percent of GDP while taxes are stabilized at 20.1 percent.)

No one knows exactly what happens if we simply maintain the status quo instead, but at some point it will certainly become untenable. As the debt accumulates, our interest payments will become more difficult to manage — they’ll eat up 40 percent of all our tax revenues in 2048 — and interest rates themselves may rise. Eventually investors will stop lending us money at rates we can afford, and we’re looking at a debt crisis.

But “eventually” is a tricky timeframe for consequences when politicians are involved, and the alternative isn’t something any congressman would want to run on. Let’s take a quick walk through Riedl’s sensible and fair series of reforms, which reduce the annual deficit (as distinct from the total debt) by 6 percent of GDP:

Social Security spending falls by 1.2 percent of GDP. The retirement age climbs from 67 to 69, reflecting the fact that lifespans have increased. As for benefits, the bottom 40 percent of income earners are held harmless, as are current retirees — but middle- and higher-earning future retirees lose out. “For a couple turning 65 in 2030 with median lifetime earnings,” Riedl writes, the plan’s reforms “mean approximately $2,500 less in annual benefits adjusted for inflation”; the damage for the top 20 percent is $8,600. Riedl points out that these “cuts” are relative to the current formulas, in which benefits grow faster than inflation, so most people would still be treated at least as well as today’s retirees are. But even with that in mind, the top 20 percent see cuts, and the top 10 percent see “a significant drop in inflation-adjusted benefits relative to 2018 levels.”

Medicare costs fall by 1.5 percent of GDP. This is the biggest cut in the plan, the most sweeping change to an entitlement program, and the reform with the most uncertain benefits. Traditional Medicare (Parts A and B) is replaced with a “premium support” system in which seniors are given vouchers with which to buy private plans; this would lead to “more choices for seniors, no reduction in benefits, and substantial cost savings both for seniors and the federal government.” However, the money each senior receives is tied to the average cost of a plan offered by local insurers — “no matter how much healthcare costs rise.” This means that if competition doesn’t succeed in driving down costs, taxpayers won’t save the expected amount of money. (To be fair, it also means that the reform could save more than anticipated.) Oh, and by the way: Seniors’ premiums will rise by “approximately 4% of aggregate senior income,” though, as with the Social Security changes, the bottom 40 percent of seniors by income will be protected.

Critics will say the plan “ends Medicare as we know it,” and they’ll be right. So huge political opposition is a sure thing, even though this is the best chance we have for making the program sustainable.

Medicaid, the health-care program for the low-income, is chopped by 0.6 percent of GDP. This program is a ripe target because it’s utterly dysfunctional — for one thing, it reimburses states a set percentage of whatever amount of money they choose to spend (anywhere from 50 to 76 percent), providing an obvious incentive for states to spend more. Riedl’s plan addresses this problem through a “per capita cap” on payments to states. It also kills the special higher rate, currently 94 percent, that applies to Obamacare’s Medicaid expansion. (As Riedl notes, “no rational explanation exists” for subsidizing the expansion population — “nondisabled, working-age adults” — at a higher rate than the traditional Medicaid population, which includes children, the elderly, and the disabled.) These types of changes are obviously anathema to state governments, even if they’re entirely defensible as policy.

Assorted other programs have their growth rates limited, saving another 1.2 percent of GDP. This is a hefty share of the total savings — the same as the Social Security reform — but it’s hard to say exactly what opposition would arise and whether Congress would really stick to it if enacted.

That still doesn’t eliminate the need to raise taxes. So far we have Social Security cuts, a total revamping of Medicare, and Medicaid reforms that will hammer state budgets. But even all that won’t let members of Congress keep their pledges not to hike taxes. The payroll taxes for Social Security and Medicare increase by one percentage point each, with a surcharge covering folks who earn above the threshold where the Social Security tax currently maxes out; the tax exclusion for employer-provided health care is also trimmed back. These and some smaller tweaks raise the final 1.5 percent of GDP.

I hope I’m wrong, but I don’t think these are the kinds of changes politicians will make to stave off a crisis that will arrive at some indeterminate date in the future. And while you can of course change the mix of tax hikes, spending cuts, and cost-saving reforms, it would be hard to decrease the total amount of pain.


The situation will have to become far more dire to force action. And by that point, the required changes will be even more excruciating.

When it comes to the pandemic, the ‘adults’ in charge of the White House have failed miserably.
Charles C. W. Cooke