Actually, $3.5 Trillion Is a Lot of Money

The Democrats were for it before they were against it.

Is steel more moral than concrete?

House Democratic leader Nancy Pelosi of California said last week that she and other Democrats consider a border wall “immoral.” But some of the same Democrats who decry President Donald J. Trump’s proposed concrete wall as a 30-foot-tall human-rights violation actually approved 700 miles of steel barriers under the Secure Fence Act of 2006 (SFA).

Give Pelosi this: She is consistent. She voted against SFA. Maybe, deep down, she wants an America without borders. Perhaps she also has removed the front and back doors of her five homes, the better to welcome everyone. It’s tough to question the hospitality of the woman who said last spring that each member of MS-13 — the barbaric, pro-decapitation street gang — twinkles with “a spark of divinity.”

Meanwhile, these current, former, and then-ascendant Senate Democrats all voted for SFA, which President George W. Bush signed into law. On September 26, 2006, the Senate passed SFA 80–19, with 26 Democrats voting Yea. Among them:

Illegal aliens from the so-called caravan lately have been caught on camera burrowing under and vaulting over the steel fence. One of these barricade climbers, Honduran Maryury Elizabeth Serrano-Hernandez, 19, soon went into labor and delivered an American-citizen anchor baby in a San Diego hospital on November 27. Border Patrol officers told Fox News that the mother, the father (age 20), their newborn son, and another boy (age 2) all were “placed into immigration proceedings and released on their own recognizance on December 2.” Let’s see if they eventually attend their asylum hearing or simply dissolve into the American landscape.

These young Hondurans were just a few of the 51,856 illegal aliens whom the Border Patrol apprehended on the southern frontier last month. In fiscal year 2018, that figure was 396,579.

Most of these criminals (who break the law simply by entering without U.S. visas) hail from unthreatening nations. But others come from “countries of interest,” so designated by Obama (not Trump) in 2010, due to their state sponsorship of or susceptibility to militant Islam. Travelers who reach U.S. ports of entry after visiting or traversing countries of interest are subject to additional scrutiny by federal officials. Of course, if these foreign subjects successfully dodge American authorities by breaching the border, no such scrutiny applies. 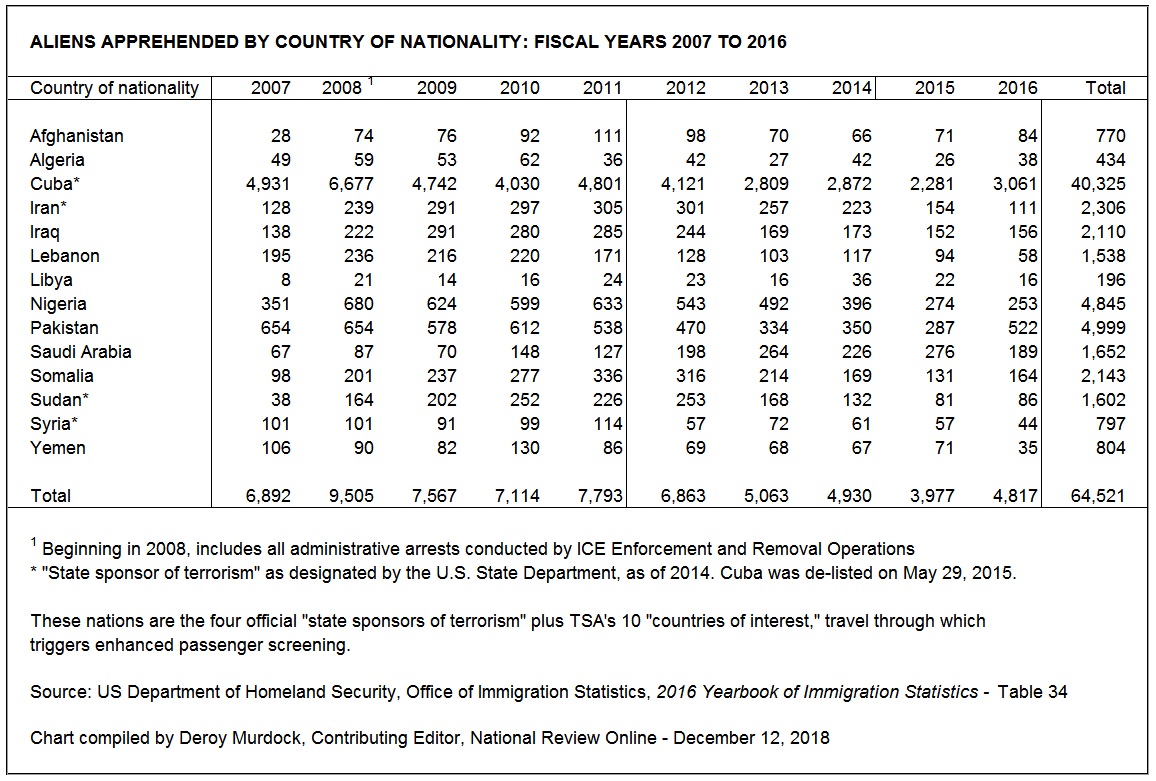 Remember: Federal officials nabbed the individuals counted above. Not included in these data: Those who slipped into America and have skirted the authorities. Where are they? Your guess is as good as any.

Given the inadequacy of today’s steel barrier, it is more vital than ever to erect a solid concrete wall to shield America from those who ceaselessly break into our country with neither permission nor papers. On this matter, today’s Democrats should heed their former selves.

Raffensperger, who stood up to Trump's efforts to overturn the 2020 results, was invited to deliver a speech on 'election subversion.'
Isaac Schorr

“I see the administration wants to fry our agents, he just started a war with Border Patrol,” said one agent.
Caroline Downey

Actually, $3.5 Trillion Is a Lot of Money

And it’s not even the whole cost of congressional Democrats’ plans.
Dan McLaughlin