The Worst Spending Bill in Decades?

How Bail Worked in the Michigan School-Shooting Case

The Empire in Twilight

The FBI and Justice Department are investigating the shocking, inexplicable dismissal of a Chicago grand jury’s 16 felony counts against actor Jussie Smollett. The charges could have  cost serious prison time for a ham-handed hoax in which Smollett allegedly paid two body-building brothers to attack him and blame it on supporters of President Donald Trump.

Smollett, 36, claimed that he walked through Streeterville, his fashionable neighborhood, at about 2 a.m. on January 29. The area was unusually empty, thanks to a polar vortex that had driven temperatures to 9 degrees Fahrenheit, with a wind chill of 4 below zero. Nonetheless two white, masked men concisely called the gay, black thespian an “Empire f****t n****r.” Smollett said that they loosely placed a white rope around his neck, doused him with bleach, and then declared: “This is MAGA country”— startling news in a city that went just 12.5 percent for Trump.

Like rope, Smollett’s tall tale unraveled. He was arrested on February 20 and eventually accused of 16 felonies, including disorderly conduct, filing a false police report, and repeatedly lying to cops. He was in serious legal jeopardy until March 26, when Foxx’s office dropped all charges, even though she had “recused” herself — but in “a colloquial use of the term rather than in its legal sense,” as her spokeswoman Keira Ellis explained.

Prosecutors let Smollett off the hook, although they got their man. “I do not believe he is innocent,” First Assistant State’s Attorney Joe Magats said as he let Smollett waltz away last Tuesday. “Based on the facts and the evidence,” Foxx told WLS-TV, “this office believes that they could prove him guilty.” Regardless, she called the tender love and care that Smollett enjoyed “a just outcome based on the circumstances.”

Smollett never admitted guilt — step one in a typical leniency arrangement. In fact, he defiantly pleaded innocent to stunned courthouse journalists: “I’ve been truthful and consistent on every single level since day one.”

His attorneys went further. “It is the mayor and the police chief who owe Jussie — owe him an apology — for dragging an innocent man’s character through the mud. Jussie has paid enough.”

“From top to bottom, this is not on the level,” Democratic mayor Rahm Emanuel fumed at a subsequent press conference. In a March 28 letter, Corporation Counsel Edward N. Siskel told Smollett that “the City requires immediate payment of the $130,106.15 expended on overtime hours in the investigation of this matter.” Adding yet another cinematic layer to this saga, Siskel’s late uncle was the legendary Chicago Tribune film critic Gene Siskel.

Smollett deserves severe punishment, including lengthy incarceration, not just for this six-digit incineration of taxpayer money, but for the far graver diversion of police manpower that he triggered.

CBS Chicago reports that 24 detectives were yanked off other cases to spend some 1,000 hours probing Smollett’s complaint — before overtime. “We interviewed over 100 individuals in a canvass of the area and a follow-up canvass as our investigation expanded,” said police commander Edward Wodnicki. Along with federal officials, Chicago cops executed 50 subpoenas and warrants for financial documents, phone records, and social-media posts. Police also pored over surveillance video from 55 city security cameras and private devices. “Those are resources and time spent that we can never get back,” police superintendent Eddie Johnson said in disgust.

There was plenty of crime to fight while cops, instead, performed their roles in Smollett’s psychodrama.

Statistics that match the precise dates of l’affaire Smollett have proved doggedly elusive. The Chicago Police Department reports these figures by week, and this outrage’s timing does not fit this format. However, these numbers are from January 28 (the day before Smollett first called police) to February 17 (three days before his arrest). Behold the 2,654 offenses that cops could have investigated or prevented had they not wasted 23 days chasing the rope-and-bleach-wielding figments of Smollett’s imagination:

“In Chicago, 74 percent of homicides tracked over the past decade went unsolved,” according to an outstanding graphic database in the July 24 Washington Post. Across the 55 U.S. cities that the Post analyzed, 49.6 percent of murders, on average, resulted in arrests. That’s nearly double the Windy City’s ten-year, 26 percent handcuff rate. (Chicago’s 2017 homicide-arrest rate was a woeful 17 percent.) Among the 5,534 homicides in Chicago that the Post scrutinized between 2007 and 2017, police made arrests in some 1,439 incidents. Hence, Chicago cops could have investigated any of 4,095 cold murder cases rather than hunt make-believe homophobic racists. 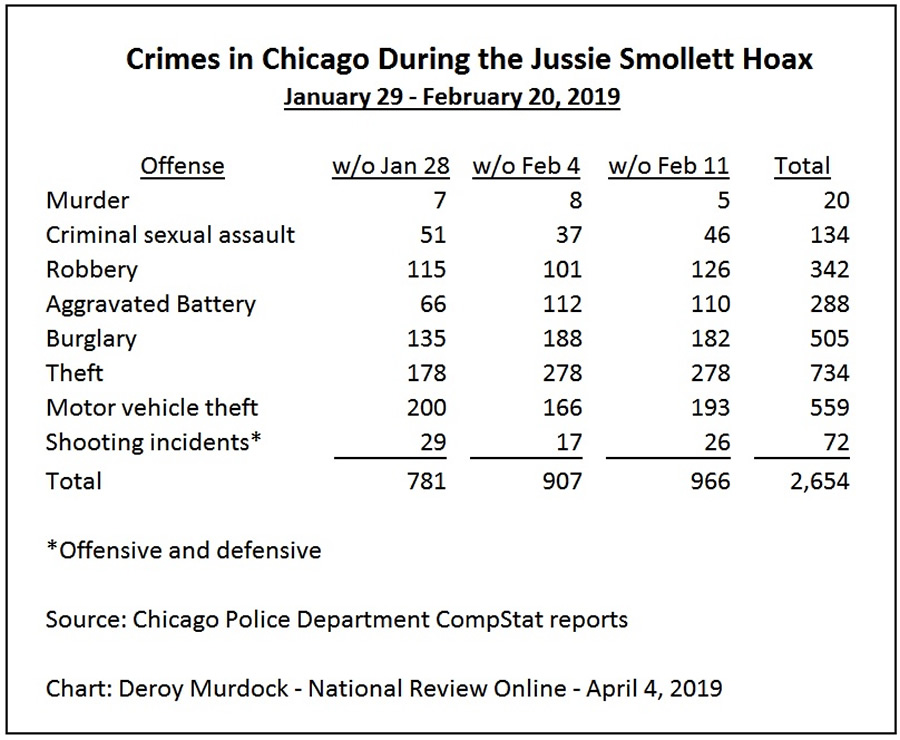 Smollett gleefully stirred this country’s already steaming pot of sociopolitical division. The last thing America needed was another reason for blacks and whites, straights and gays, and liberals and conservatives to distrust each other. Rather than promote healing, Smollett tightened tensions for more than three weeks.

These dismissed charges send a dreadful message: If you want to call 911 and lie about fake crimes, go for it! Cops have coped with the Duke lacrosse “rape” case, the UVA “rape” conspiracy, the anti-Kavanaugh “gang rape” tale, and countless bogus claims of “hate crimes” perpetrated by Trump supporters. (Even as Trump fans actually get flogged.) These accusers rarely, if ever, suffer any consequences for lying and cremating law-enforcement resources. If Smollett  stays free, he will inspire fresh reports of fictional crimes.

Conversely, good luck to anyone black, gay, or both who reports a genuine act of racist, homophobic violence. Thanks to Smollett, such true crimes will engender undue skepticism and needlessly rolled eyes. Way to go, Jussie!

The FBI and Justice Department announced last week that they are on this case. If Smollett mailed himself the menacing letter that he said he received before his “attack,” he will be ripe for a federal mail-fraud and postal-threat prosecution. Let’s hope that officials find Smollett’s fingerprints all over that envelope and his DNA on the dried saliva on its seal. If this sends Smollett to federal prison for several years, then God Bless America.

Despite his dropped-charge jackpot, Smollett still awaits justice. His $10,000 forfeited bond and 16-hour hangout at Jesse Jackson’s office do not negate these facts:

At the expense of President Trump and his supporters, Jussie Smollett staged a hate crime to boost his brand, fraudulently score a raise on Empire, and, thus, deepen the income inequality between himself and the average U.S. worker. There is enough here to infuriate every American, from left to right.

The city council is expected to pass the bill on Thursday.
Zachary Evans

The development comes after Meadows formally announced he would refuse to continue cooperating with the probe.
Caroline Downey

The six percentage-point margin is expected to shrink as the remainder of the votes are tabulated.
Caroline Downey

The building is home to the Wall Street Journal, the New York Post, and Fox News.
Caroline Downey

Omarova, who grew up in the Soviet Union, was accused of harboring Communist sympathies during her confirmation hearing.
Caroline Downey

A report from the surgeon general spells out how the mental health of children has suffered during COVID.
Michael Brendan Dougherty