The Freedom Letter to the Romans

How Olana, Frederic Church’s Home, Survived the Bulldozer and Thrived

Religious couples are the most blissful of all.

One of the more remarkable developments of the last 50 years is the relentless commitment of a segment of the American academic and cultural elite to selling a vision of American life that is slowly but relentlessly proving to be — on balance — more harmful for children and less joyful for adults, while also relentlessly mocking (at worst) or ignoring (at best) the life choices that lead — again, on balance — to greater human flourishing.

I’ve asked this question before, but let me ask it again. How many happy, sexually vibrant religious married couples have you seen on popular television shows or movies — even in this era of fragmented, targeted entertainment? Now, compare that number (which is very, very close to zero) with the number of times you’ve seen liberation from religion portrayed as the key to sexual fulfillment.

How many times, amid the celebrations of sexuality on college campuses, do you hear the speakers at the various “sex weeks” say something like, “If you really want to improve your odds of enjoying a sexually satisfying life with a faithful partner, you might want to check out church”? Or how many wonkish progressives — the very people most likely to share charts and graphs about the effects of public policies or to pass around the latest social science about race, gender, and gender identity — will dwell on charts such as these, from the invaluable Institute for Family Studies: 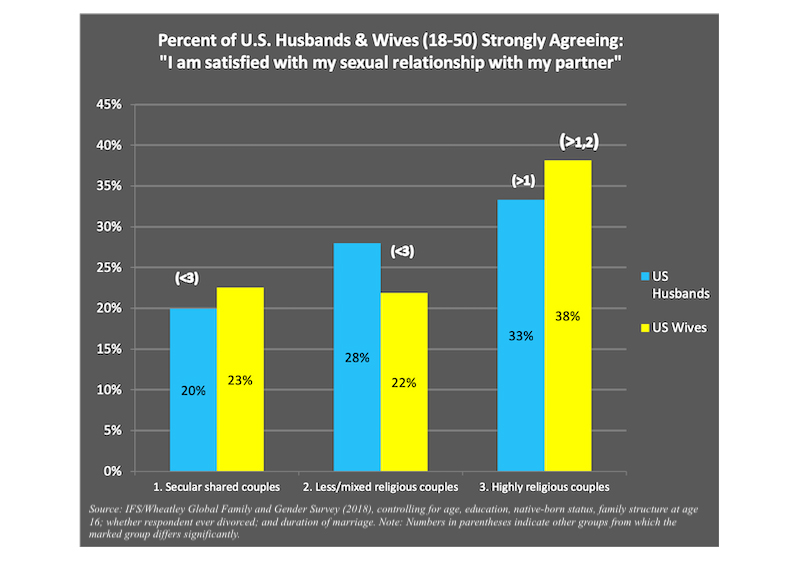 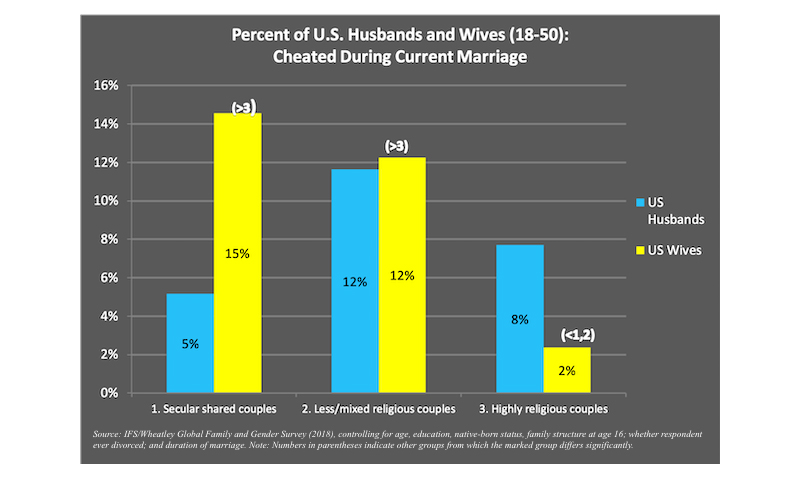 These figures represent the U.S. portion of an extraordinary IFS study that attempted to answer the question “Is faith a global force for good or ill in the family?” IFS examined the relationship between religion and fertility, domestic violence, relationship quality, and infidelity. The findings were fascinating.

The global data reflected the U.S. reality. Highly religious couples “enjoy higher-quality relationships and more sexual satisfaction” compared with mixed or entirely secular couples. Moreover, in the global study, religion has an increasingly positive influence on fertility. Religious couples had “0.27 more children than those who never, or practically never, attend.”

Sadly, however, religious practice was “not protective against domestic violence.” There was no statistically significant difference in risk between secular and religious couples. 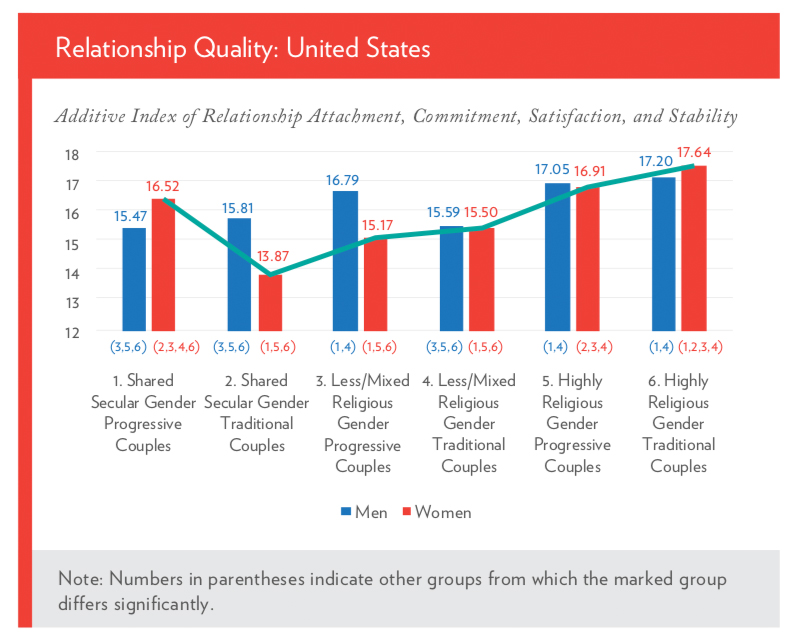 It’s worth considering these results in light of a recent, much-discussed Atlantic story by Kate Julian describing America’s so-called “sex recession.” In a time when our nation has erased sexual taboos, cast off moral restraints, and become “more tolerant of sex in just about every permutation,” young Americans are having less sex. And one of the prime reasons is the “decline in couplehood among young people.” Married people have more sex than single people, yet fewer people get married, and the people who do marry “have been marrying later.”

Over the last decade we’ve seen quite a bit of triumphalism from the forces of American secularization and from those who’ve long sought to question, undermine, or even demolish traditional institutions of American life. Marriage declines. Church attendance diminishes. But the new dawn of human flourishing and personal joy proves elusive.

Single parents struggle to raise their children and provide not just the economic and educational opportunities they need, but also the emotional support they require. Fractured families grapple with the crisis of drug abuse. Our post-religious politics are nasty, divisive, and vicious. And now we increasingly see that the sexual revolution can often bring its own brand of unhappiness, including — ironically enough — sexlessness.

As someone who has spent my entire life in religious communities, I’ve always rebelled against the cultural stereotypes. I’ve grown up in communities that often struggled with the exact same moral maladies that inflict the rest of the world but always included systems and networks of encouragement and support. I did not grow up around emotionally stunted prudes. I don’t live around such people now.

There are certainly people who flee religious communities for good reason. There are terrible churches, and there are abusive religious figures, including fathers, husbands, and pastors. But I fear that in our pop culture and in our academies, the anecdotes have overwhelmed the data, and therefore our cultural elites have all too often missed the real story of the meaning, satisfaction, and virtuous purpose in America’s faithful families.

Sexual liberation has all too often brought neither sex nor liberation, and thanks to the work of the IFS, we can respond to felt need with real data. Are you seeking love in this life? The church doors are always open, and while matchmaking isn’t its purpose, the connection to a holy God carries with it connection to his flawed people, and in those connections you can find profound joy.

Cities rise and fall. New York is sketchy now. Can it rise again? Will people demand it? Or shrug, shudder, and mutter?
Jay Nordlinger