While reversing the precedent would be a huge victory for the movement, it would have only a modest impact on the nationwide abortion rate.

Ever since I’ve been part of the pro-life movement, the movement’s Holy Grail has been overturning Roe v. Wade. The nightmare scenario of abortion-rights activists was the same — overturning Roe. But is the focus on Roe proportionate to its actual impact on American abortion rates? In other words, if Roe falls, how close would we be to a culture that protects life from conception until natural death? That’s the ultimate goal of the pro-life movement, after all.

Yesterday, the New York Times reported on the results of research that attempts to answer that question. A study by researchers from Middlebury College, the Guttmacher Institute, and the Bixby Center for Global Reproductive Health found that in “more than half of states, including the entire West Coast and Northeast,” overturning Roe would have no real effect on abortion access.

For women in the South and much of the Midwest, the answer would be very different. Overturning Roe would allow a host of pro-life laws — such as “trigger bills” that ban abortion if Roe is overturned and the various “heartbeat bills” that are blocked by existing Supreme Court precedent — to go into effect

So, what does this mean in terms of real numbers? The study estimates that post-Roe, the abortion rate would be 32.8 percent lower “for the regions at high risk of banning abortions” and 12.8 percent lower nationwide. In raw numbers that’s more than 100,000 fewer abortions per year, a pro-life triumph. But am I the only pro-lifer who is sobered rather than enthused by the idea that ending Roe would cut nationwide abortions by less than 13 percent?

How could that be? Haven’t states passed waves of pro-life legislation? Wouldn’t abortion bans have greater effect? Not really. A glance at state-by-state Guttmacher data on abortion rates tells us why. The states that have sought to ban or dramatically restrict abortion generally already have extremely low abortion rates. The big states of the West and Northeast that don’t restrict abortion have much higher rates of the procedure.

For example, in the states that have recently passed heartbeat bills or other significant pro-life statutes, the rates range from a high of 15 women per 1,000 (Georgia, a significant outlier) to a low of six women per 1,000 (Kentucky). Ohio’s rate is eleven women per 1,000, Tennessee’s is ten, Louisiana’s is ten, Alabama’s is nine, Mississipi’s is nine, and Missouri’s is eight. In other words, only one of these states matches Guttmacher’s national abortion rate. The rest are well below it.

These numbers highlight two central realities in the fight for life: Cultural change precedes legal change, and cultural change is more potent than legal change. For example, according to CDC data, despite an expanding population, there were 202,000 fewer abortions in the United States in 2015 compared with 2006. That’s a greater reduction than the one projected to result from overruling Roe, and it was accomplished while Roe remained intact. Consider this Guttmacher chart, which chronicles a long-term decline in the abortion rate of more than 50 percent. That falling line represents millions fewer abortions: 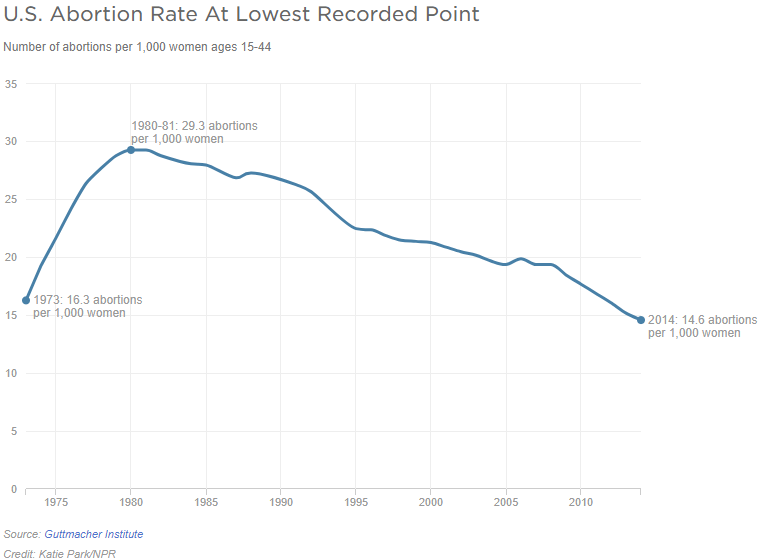 Put simply, the pro-life movement is one of the most successful cultural movements in American history.

I’m not arguing that the law doesn’t matter. Obviously it does. But it tends to follow and then amplify underlying cultural trends. A state has to be ready to pass abortion restrictions, and when it finally does, those restrictions save additional lives by diminishing the abortion industry’s presence in the state.

So, what should pro-lifers do with all this information? Mainly it helps us balance our efforts appropriately. We should all be able to agree that keeping the abortion-rate line on the Guttmacher graph moving downward is our fundamental, shared goal. The law can assist in that goal, but the law is not the principal means of achieving it.

Note well that the line has kept moving downward through Democratic and Republican administrations alike, through waves of pro-life and pro-choice legislation. Certainly, there are many factors responsible for this decline apart from pro-life attitudes, but it is also true that the percentage of unintended pregnancies ending in abortion fell from 54 percent in 1981 to 42 percent in 2011.

Roe is an abomination, and it needs to be overruled and relegated — along with precedents such as Dred Scott and Korematsu — to the dustbin of American legal history. But ending Roe isn’t the whole fight. As the New York Times report illustrates, it’s not even most of the fight.

Win the culture, and you win the war, saving countless lives even before you can change a single law. Lose the culture, and not even a repealed Roe will end the terrible scourge of abortion in the United States. It’s encouraging to see the immense impact of the pro-life movement in spite of decades of disappointment at the Supreme Court. It’s discouraging to know that even the movement’s greatest potential legal triumph would still leave the vast bulk of America’s abortion regime intact.

That’s the scale of the challenge, but decades of declining abortion rates give pro-life Americans reason for great hope. If there is such a thing as an arc of history, for more than 30 years it has been bending toward life.