More Americans Than Ever Identify as LGBTQ: Gallup

Run-of-the-mill incompetence is by far the likeliest explanation for the infamous financier’s death.

It was almost heartening. For a change, Americans on the left and right were united: Both sides rushed to hint that a dark conspiracy must have been behind the death of Jeffrey Epstein in his jail cell Saturday morning.

The editor of Mother Jones, Clara Jeffery, called Epstein’s death “sketchy as sh**.” Claire McCaskill, the former Democratic senator from Missouri and current MSNBC pundit, said, “Something stinks to high heaven. How does someone on suicide watch hang himself with no intervention? Impossible. Unless . . .” Harvard Law professor Laurence Tribe said, “You don’t have to be a conspiracy theorist to see an evil coverup to protect lots of powerful men here. You’d have to be bizarrely naïve not to.” “How Russian,” said Joe Scarborough.

On the right, professional B.S. merchant Mike Cernovich said the suicide explanation “just does not make sense.” Lou Dobbs said, “Epstein should have been at least on Arkanside Watch,” hinting that one Clinton or another assisted in securing Epstein’s exit from this world. National-security pundit John Schindler, who markets himself as an anti-Trump conservative and has 272,000 Twitter followers, wrote, “So there’s no video of Epstein’s so-convenient-for-some-major-VIPs demise. Inside a facility with cameras everywhere. And nobody, of course, saw anything. Gosh, who could have seen this coming?” President Trump, naturally, got in on the action with a retweet: 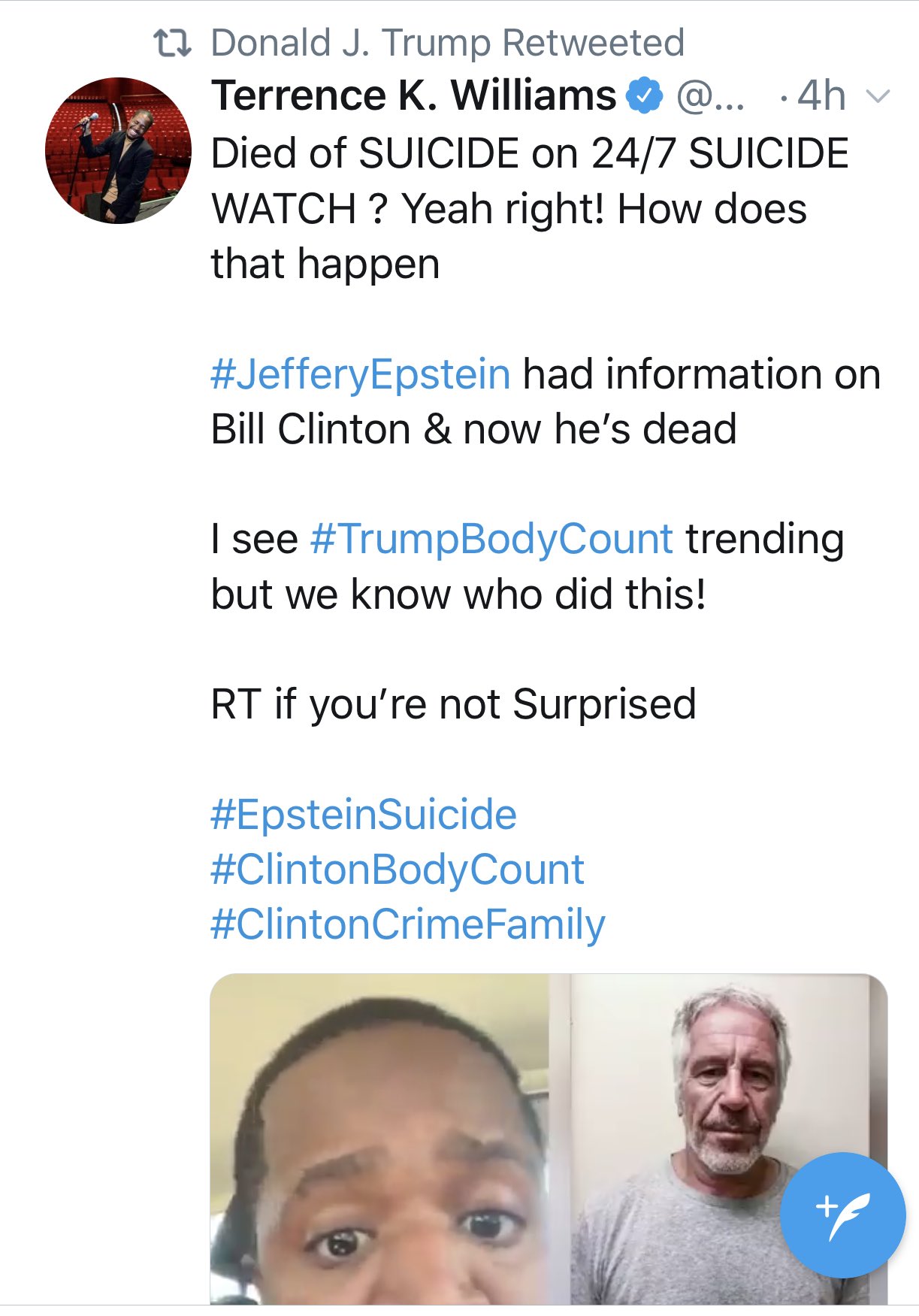 Indeed: After Jeffery referred to Epstein’s death as “sketchy as sh**,” her magazine tweeted this comment, “That Donald Trump would push a conspiracy theory implicating the Clintons in Jeffrey Epstein’s death is not surprising. This behavior is what first made him a conservative star in the first place.”

If Epstein didn’t commit suicide, he was murdered. But how exactly is this supposed to have worked? He was found dead in a cell he shared with no one. How did he die, if not by his own hand?

At this point the imaginations of our very creative class of conspiracy theorists seem to dry up. If someone other than Epstein was responsible for his own death, who was it? Could a guard have murdered Epstein and made it look like a suicide? Is there any amount of money that would persuade a federal prison guard to put himself on the hook for a murder charge, in a case involving an infamous prisoner whose death would surely draw immense scrutiny, in a facility that has lots of cameras?

Okay, so maybe it wasn’t a prison guard. Maybe one or more guards were simply paid to look the other way while some hired hand did the foul deed. This scenario is even harder to believe. Some hit man got in and out of a tightly guarded facility undetected? I don’t know too many hit men, but I rather think they like to do their work in the shadows, not in a place that is under 24/7 surveillance. Any guard who looked the other way for money would have been an accomplice to murder.

Maybe it was someone on the inside other than a guard, such as a fellow prisoner? The reason we think killing a prison inmate is easy to get away with is that we’ve all seen a lot of movies in which it is. Crime families have lots of associates behind bars, right? And the Clintons (or the Trumps) are much like a crime family? Not really, no. Whatever you think of our leading political families, whatever corners they may cut in search of tax breaks or foundation donations or making emails inaccessible, they don’t have a lot to do with the kinds of people who are in the federal holding pen in downtown Manhattan. We may toss around the phrase “the Clinton mafia,” but let’s not let colorful metaphors turn us into idiots. There isn’t an actual Clinton mafia, supported by a network of violent criminals behind bars in all the major jails. Hillary Clinton can’t just put the word out on the street that somebody in the Metropolitan Correctional Center needs to stop breathing and expect a loyal thug to step up brandishing a bedsheet noose. If somebody wanted Epstein out of the way, it would have been far easier to take him out before he went to jail.

Do we need answers about Epstein’s death? Of course. But the explanation will probably turn out to be that a guard fell asleep, a rule wasn’t followed, oversight was poor, or other stupid mistakes were made. Unlike any of the Epstein conspiracy theories, my master theory — that the federal government is incompetent — is exceedingly easy to believe.

Democrats Are Laying a Trap with Trump’s Impeachment Trial

Beware: Those arguing the Dems are making a miscalculation have got it all wrong.
Andrew C. McCarthy

A radical new rule would politicize the classroom and very likely trample the free-speech and religious-liberty rights of teachers.
Stanley Kurtz

Though the organization claims otherwise, it is the nation’s largest abortion provider.
Alexandra DeSanctis

His posthumous critics exhibit all the flaws that he avoided.
Conrad Black

Earlier in the hearing on Wednesday, Becerra claimed that he "never sued any nuns" during his tenure as attorney general.
Zachary Evans

Becerra Commits to Collecting Health Data by Race: 'It's Time'

President Biden's nominee for Secretary of Health and Human Services did not identify any restrictions during a Senate confirmation hearing.
Zachary Evans

Frederick M. Hess
Jodi Shaw’s resignation reveals how campus illiberalism can be beaten — and why it’s so difficult to overcome in the first place.