The Left should help the Right boost absolute wealth across the economy.

New York — President Donald J. Trump’s fiercest critics claim that the gap between the haves and have-nots is expanding on his watch.

“Is it getting hot in here, or just the elevating public consciousness around rampant wealth inequality?” Representative Alexandria Ocasio-Cortez (D., New York) asked via Twitter earlier this year. According to AOC’s House website, she contends that income inequality is “being used by those in power to amplify fear and anger in our communities and further divide us.”

“When you’ve got a government, when you’ve got an economy that does great for those with money and isn’t doing great for everyone else, that is corruption, pure and simple,” the Massachusetts Democrat says. She argues that “Inequality is rapidly growing, transforming rule by-the-people into rule by-wealthy-elites” and “many American politicians seem to accept — even embrace — the politics of division and resentment.”

AOC and Warren are right, to a point: Income inequality, indeed, has grown on President Trump’s watch. And the numbers back them up.

But the Gini did not stay in its bottle under Obama. During his presidency, Gini also edged higher — from 0.47 to 0.48, in 2011. It then stalled, past Obama’s departure. So, despite his blather about income gaps, the “evil” 1 percent, and his “You didn’t build that!” gut punch to America’s entrepreneurial class, Obama did absolutely nothing to reduce income inequality.

For those who lose sleep over this matter, the gold medal for income inequality goes to Washington, D.C., the pounding heart of Big Government statism. Its 2018 Gini score was 0.53. Leftist New York (0.52) — “the state with the greatest gap between rich and poor,” as Statista’s Erin Duffin described it — wins the silver. And the bronze belongs to liberal stronghold Massachusetts (0.49).

So, for the 500th time, Leftists like New York’s AOC and Massachusetts’ Warren should clean their own sandboxes before they bark orders at everyone else.

No matter how you slice it, the Left’s quixotic quest for income equality puts zero bread on anyone’s table. What actually feeds people is larger paychecks. And, here again, Trumponomics trumps Obamanomics.

Typical gains have climbed to  a new record. As veteran free-marketeer Stephen Moore explained at FoxNews.com: 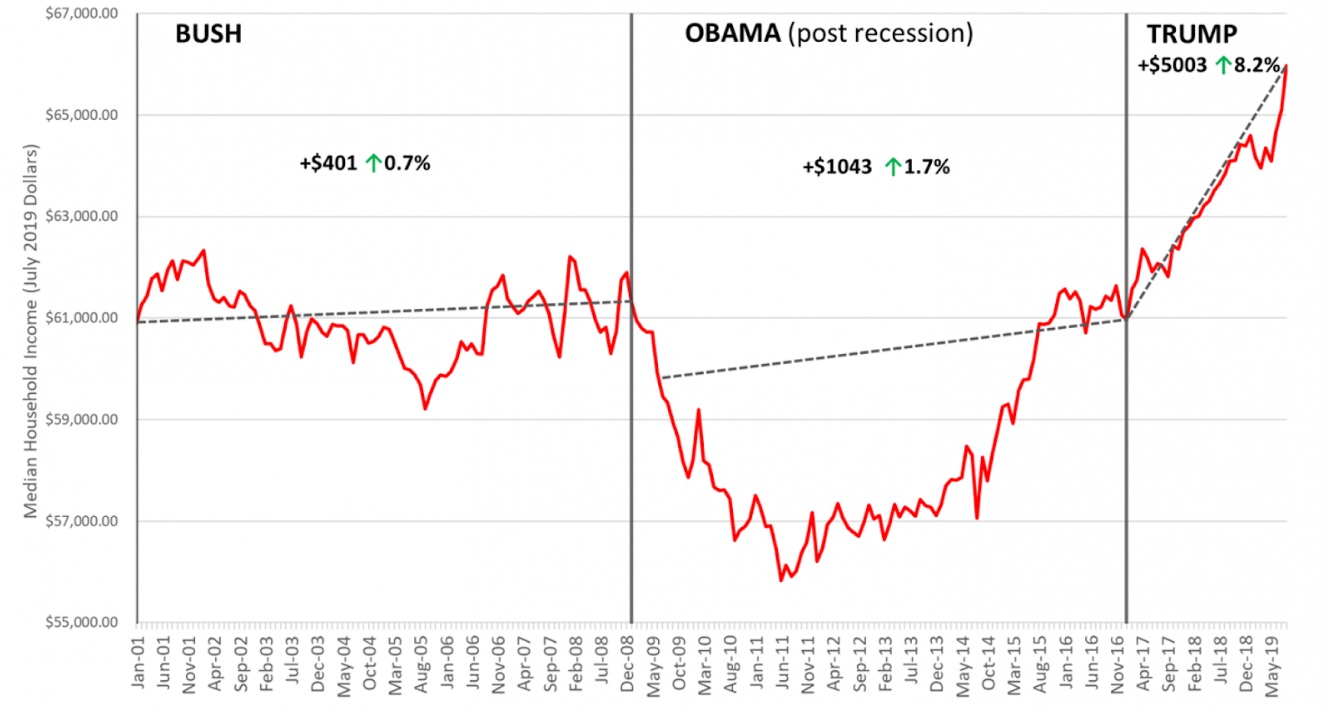 The latest Census Bureau Current Population Survey data now show that middle-class incomes, after adjusting for inflation, have surged by $5,003 since Donald Trump became president in January 2017. Median household income has now reached $65,976 – an all-time high and up more than 8 percent in 2019 dollars under the Trump presidency.

The 8.2 percent hike in middle-class wages during Trump’s roughly two-and-a-half years in the White House leaves his predecessors gasping in the dust. As Moore wrote in the September 29 Wall Street Journal, during “7½ years under President Obama — starting from the end of the recession in June 2009 through January 2017 — the median household income rose by only about $1,000.” That precise figure is $1,043, or a mere 1.7 percent.

This metric’s performance was downright self-humiliating under uber-RINO G. W. Bush. Across all eight years of his “compassionate conservatism,” median households saw their winnings creep up a paltry $401, or 0.7 percent.

“This means that in the 16 years before the Trump presidency, incomes rose by about $1,500 while in less than three years, middle incomes have risen three times faster,” Moore writes. Indeed, in a bit more than half of his term, Trump’s $5,003 mountain of growth in median household income is 346 percent higher than Bush-Obama’s $1,444 molehill of marginal middle-class earnings. 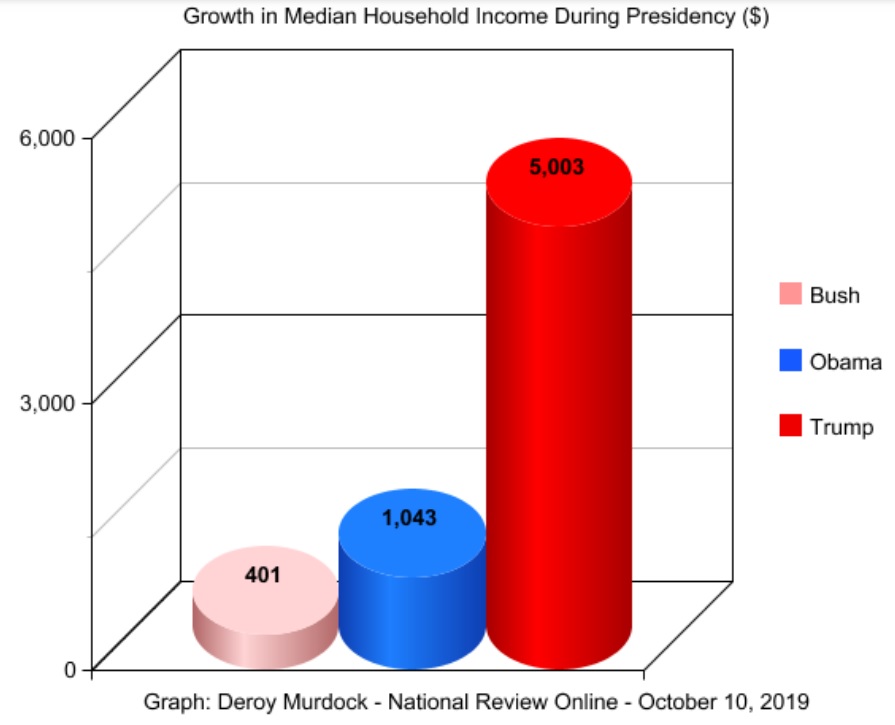 Meanwhile, “These Gini figures overlook all the massive redistribution of the modern welfare state,” notes economist Chris Edwards of the Cato Institute. He cites a recent study by government economists Gerald Auten and David Splinter. It shows that — after taxes and government transfers — the top 1 percent share of U.S. income has been roughly flat since the 1960s. “Flat!” Edwards adds. “The inequality crisis that AOC and Warren scream about is a myth.”

Beyond Edwards’ objections, and more profoundly, income inequality focuses on the wrong thing. It’s like a patient who is rushed into the hospital with a heart attack and then stunned when the emergency room doctors X-ray his leg. The focus, instead, should be on what really counts: absolute, rather than relative, incomes.

Imagine that you are weighing two job proposals:

Anyone with two brain cells to rub together would go work for Zenith, despite the ten-fold-higher level of income inequality. This simple illustration demonstrates that income inequality is, at best, yet another bogus, Left-wing distraction. At worst, this fetish weaponizes envy into ruinous public policy.

The late, great British prime minister Margaret Thatcher explained this best. She answered a question in the House of Commons from Liberal Democrat member Simon Hughes on November 22, 1990. He quizzed her on the gap between the wealthy and the needy.

Thatcher ground his premise into burger:

Mrs. Thatcher used a simple hand gesture to indicate that the Left craves a narrower divide between rich and poor, even if both are worse off, rather than a wider gap, with both rich and poor better off — although more so for the former. Liberals love misery, if they can share it with company.

The Left should grow up, throw out their income-inequality pacifiers, and work with the  Right to boost the absolute wealth of the poor, the middle class, and the rich — to heights yet unseen. 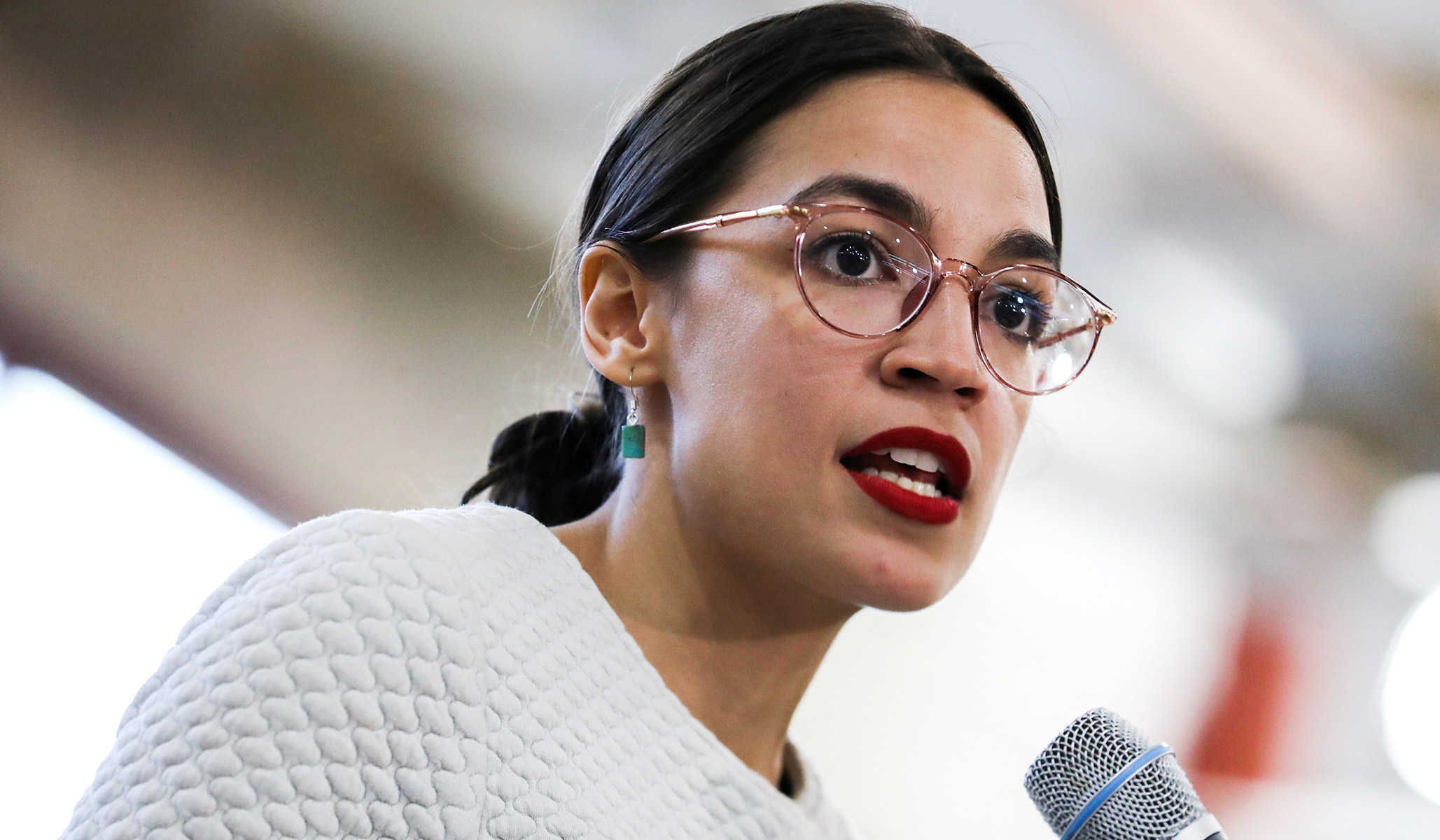