Paul A. Volcker, one of our country’s great economic statesmen, passed away last week at the age of 92. He served in many senior positions across the U.S. government but is best known as the Federal Reserve chairman who valiantly fought inflation in the early 1980s. His efforts ended what is now known as the “Great Inflation” of 1965–1982 and put the U.S. economy on a new, healthier trajectory.

While most people recognize the importance of Paul Volcker’s fight against inflation, there are an increasing number who fail to appreciate his efforts of nearly 40 years ago. Some even question whether he went too far. It is worth retelling, then, the story of the Great Inflation — and the role Paul Volcker played in bringing it to an end.

The Rise of the Great Inflation
Historically, the U.S. price level had been relatively well anchored, rising only in wartime and returning to a stable path during peacetime. This pattern ended after World War II. Memories of the Great Depression prompted policymakers to pursue full-employment policies that, along with a new war, put the first crack in U.S. price stability. Specifically, President Lyndon B. Johnson’s Great Society programs and the Vietnam War involved large fiscal expenditures that were accommodated by U.S. monetary policy. 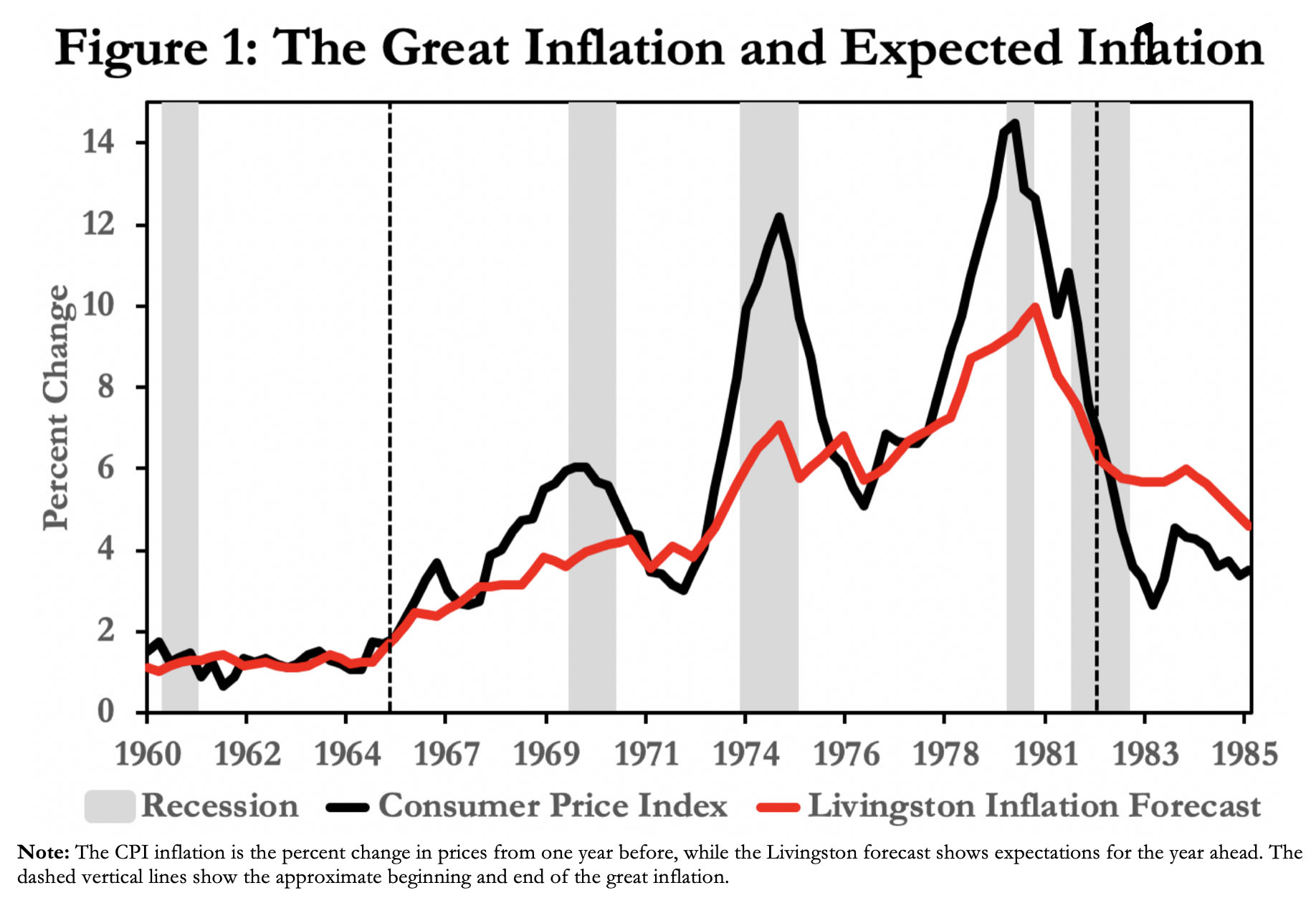 This first part of the Great Inflation created pressures that led to the collapse of the Bretton Woods system, an international arrangement where currencies of advanced economies were pegged to the dollar, which, in turn, was pegged to gold. The end of this international monetary system in 1971, though itself a result of overly expansionary U.S. monetary policy, further increased inflationary expectations, as there was no longer even a pretense that the dollar was anchored.

This inflationary development was compounded by political pressure to ease, misguided reliance on wage and price controls, oil shocks, and — most important — Fed policy that never credibly committed to price stability. As a result, inflation expectations soared and inflation eventually reached almost 15 percent in the early 1980s.

Some have argued that the Great Inflation was the result of negative supply shocks rather than accommodative monetary policy. They specifically see the oil shortages in 1973 and 1979 as driving up inflation in the 1970s. But while the oil shocks certainly affected inflation during this time, the evidence points to aggregate demand growth as the main cause of the soaring inflation.

First, the oil shocks occurred well after the unanchoring of inflation had begun in the mid 1960s. Second, the trend growth of total dollar spending in the U.S. economy also became unanchored between 1965 and 1982, suggesting that excess aggregate demand growth was driving the inflation. Finally, the oil shocks affected all advanced economies — yet Germany, which had a central bank credibly committed to price stability, avoided the high inflation.

The Great Inflation, in short, was a failure of U.S. macroeconomic policy, not the result of bad luck.

Why It Mattered
It may be easy to forget decades later and at a time when inflation is persistently low, but there were three reasons the Great Inflation was so important.

First, the rise in inflation over this period tended to coincide with a drop in real income for most people. The decline in real (inflation-adjusted) incomes may have occurred for reasons other than changes in inflation, such as the 1970s productivity slowdown, the oil shocks, and the Fed response to the oil shocks. Still, as figure 2 shows in the top and bottom panels, there was a strong negative relationship between changes in inflation and real income growth between 1965 and 1982. So even if the relationship was not causal, it appeared so to the public who came to see the Great Inflation as the source of their economic problems. 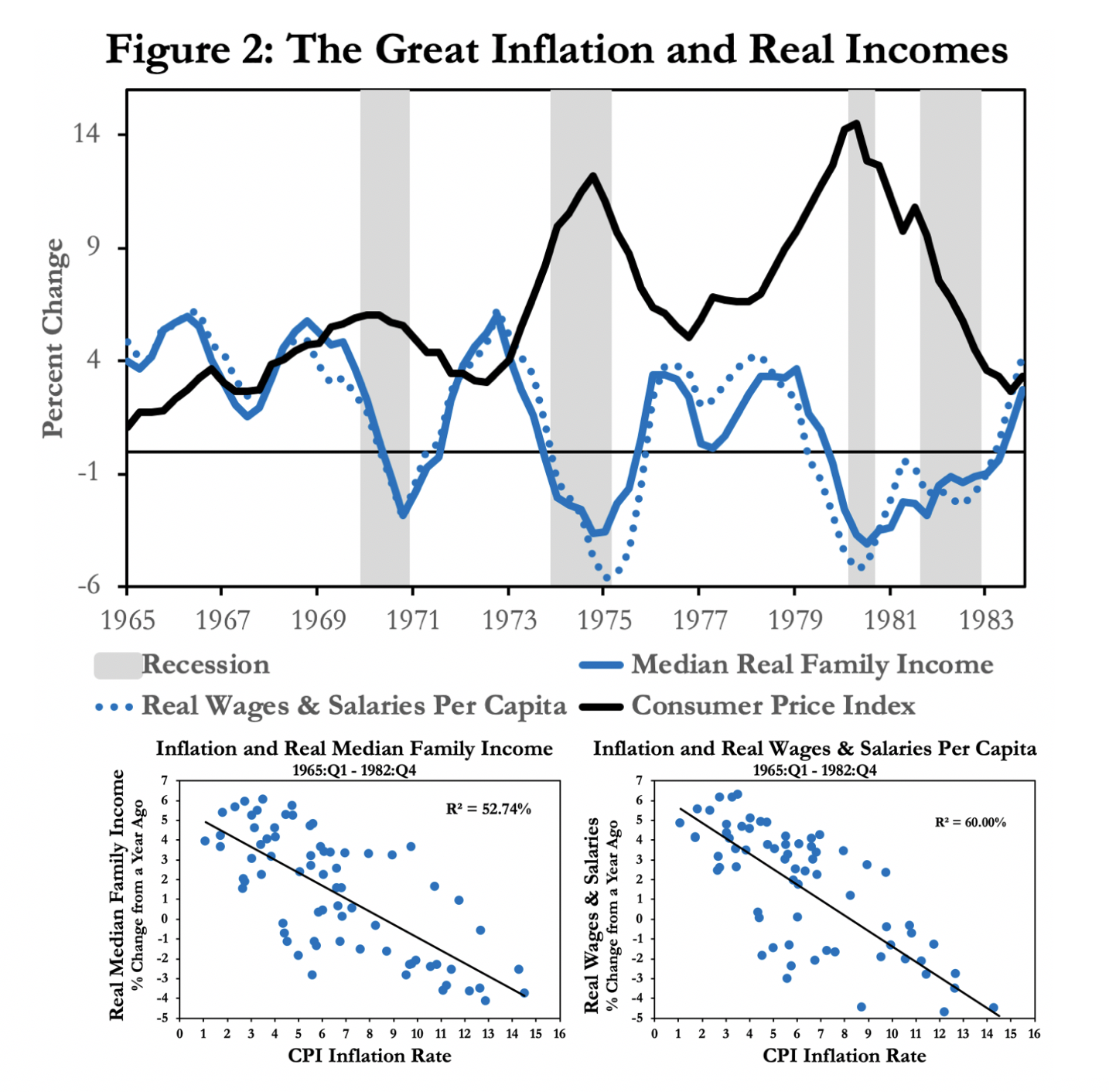 Second, the rise of inflation undermined the notion of American exceptionalism. For a country that had won World War II, put a man on the moon, and was the leader of the free world, the inability of U.S. policymakers to rein in inflation for over 15 years was demoralizing. Robert Samuelson, in his book on the Great Inflation, put it this way:

What made Americans detest inflation so much was its assault on the national belief in progress: It challenged Americans’ hopeful view of themselves and consigned their destiny to outside forces. We seemed to have lost control, both as individuals and as a society, over our fate.

The demoralizing effect of the Great Inflation caused it to become problem No. 1 for the public during much of the 1970s and early 1980s. Indeed, many Americans cared more about inflation than they did about Watergate or Vietnam, as figure 3 shows. By 1973, per Gallup, inflation was the top problem for the American public, and it mostly continued to be so through 1982. 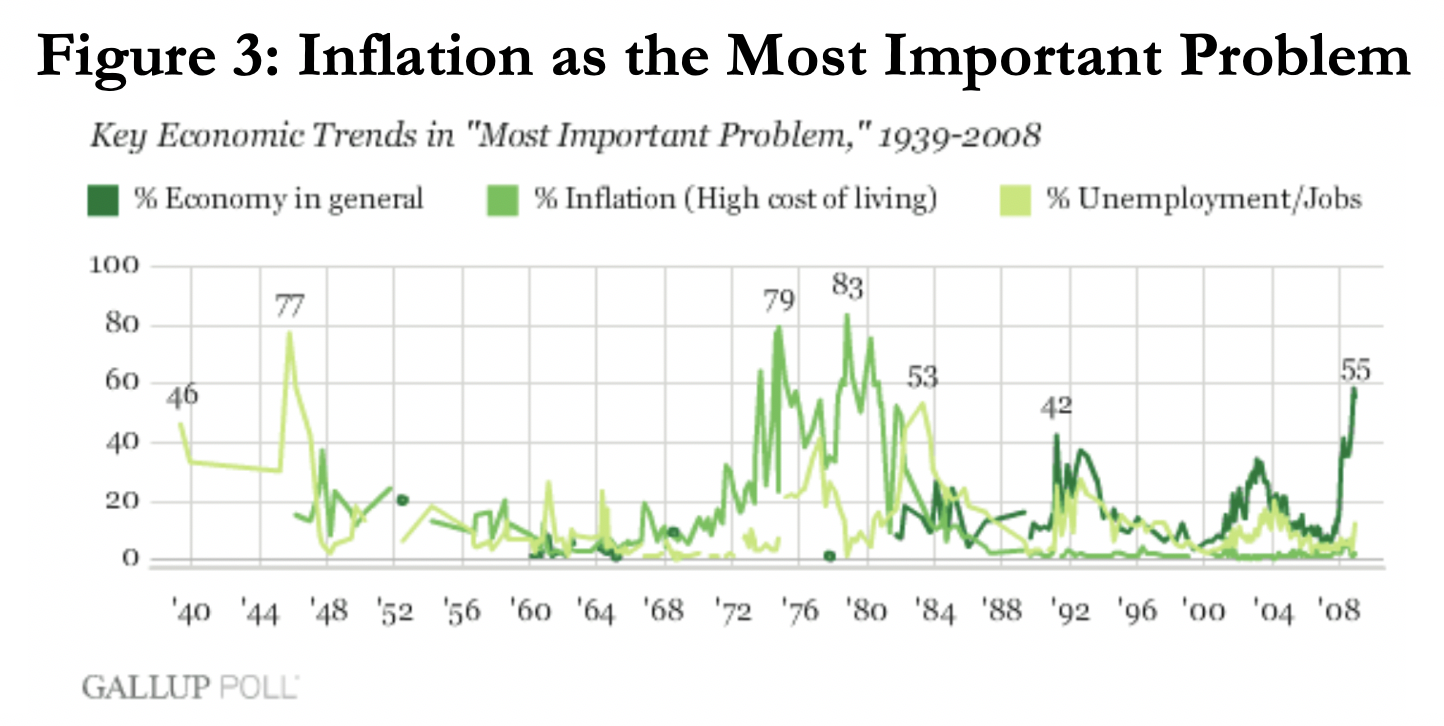 Which brings us to the last reason the Great Inflation mattered: It changed the economic and political landscape of the United States. Jimmy Carter appointed Volcker in 1979 to head the Fed in large part owing to his vow to tackle the inflation problem, which is what the body politic wanted at the time. The malaise of the Great Inflation period and the Fed’s painful fight against it starting in late 1979 also helped elect Ronald Reagan in late 1980. And, of course, the Reagan presidency was an inflection point in U.S. political history. The Great Inflation, in short, had a major influence on the trajectory of the country.

What Volcker Did
Volcker had been a long-time proponent of restoring price stability to the country and was willing to wage a painful war on inflation to achieve that outcome. He did so by pushing short-term interest rates up near 20 percent and slowing down the growth of money. These efforts caused two recessions in the early 1980s that, collectively, were about as deep as the recent Great Recession of 2007–2009 in terms of unemployment but had a much faster recovery. His fight against inflation was unpopular with some, yet he prevailed because of the broader public support for this efforts. Remember, most Americans saw inflation as the top problem through 1983.

To be sure, Volcker’s fight against inflation in the early 1980s probably could not have endured without Reagan’s support. Robert Samuelson argues in his book that both men were necessary to win the war on inflation and that neither by himself could have done it. What’s more, the fight against inflation did not end with Volcker, who left the Fed in 1987. Alan Greenspan continued the fight afterward, bringing trend inflation further down during his two decades at the Federal Reserve. Still, it was Volcker who dealt with the worst of it, and administered the painful but necessary medicine.

Some have argued that he could have ended inflation with less economic loss. Maybe so. But it is easy to forget how pressing the problem was in the late 1970s and early 1980. Volcker was appointed to wage war on inflation, not negotiate with it. Anything less than a full-on assault against inflation might have been seen as failure by the public and could have worsened inflation expectations, making it more difficult to get the problem under control. Paul Volcker took decisive, forceful action against inflation and is rightfully remembered today for doing so. May he rest in peace.

Rice Swim Coach on Transgender Debate: ‘Compete as What You Were Biologically Born’

Seth Huston feels the sport is bowing to one person "to the detriment of thousands of other athletes potentially."
Brittany Bernstein

Two recent incidents illustrate the shamelessness of contemporary reporters. Anything goes when you’re in an imaginary fight to save democracy.
David Harsanyi

Another hearing is scheduled on the mask mandate for Friday morning.
Brittany Bernstein

He presents more risk than reward for both the prosecution and the defense.
Andrew C. McCarthy