Since independence in 1991, Ukraine has experienced two revolutions, a war, and more

There was 1991, when the Soviet Union collapsed, and states such as Ukraine gained their independence. Then came the first revolution, in 2004: the Orange Revolution. This was a democratic uprising, stirring to many around the world.

One of the presidential candidates, Viktor Yushchenko, had been poisoned. The poisoning did not kill him, quite — but it disfigured his face beyond recognition.

Yushchenko had a lot to endure. He had been known as an exceptionally handsome figure — he still is. And, yes, he survived the poisoning. But it sought to take away his sense of identity, his well-being, his security. He gave a tremendous example of physical courage and mental courage.

I saw him at Davos in January 2005, at the height of his disfigurement. (Over the years — with steady medical attention — Yushchenko’s looks returned to almost normal.) He was hard to look at. But he carried himself with tremendous dignity, and, honestly, you never saw a more noble face.

Yushchenko was president of Ukraine from 2005 to 2010. In the first two years of his presidency, he underwent 26 surgeries under anesthesia. A doctor was amazed that he could even sit. Yushchenko had to change his shirt several times a day, because of bleeding.

Opinions vary as to the quality of his presidency. But no one can gainsay the man’s courage. The Orange Revolution was bloodless, or nonviolent — except for Yushchenko.

In Russia, Putin could not believe that there had been a genuine democratic uprising in Ukraine. It must have been a CIA maneuver. Once a KGB man, always a KGB man: You cannot imagine that the rest of the world doesn’t operate as you do.

Ten years after the Orange Revolution came the second revolution, another democratic uprising: the “Euromaidan,” it is called. It, too, stirred people around the world. This revolution was not bloodless or nonviolent, unfortunately: Approximately 100 protesters were killed. They are known, today, as “the Heavenly Hundred.”

Viktor Yanukovych, as I mentioned earlier in this journal, fled to Russia. He is wanted back here in Ukraine for high treason. He fled during the night of February 21, 2014, assisted by Russian troops. Putin then annexed Crimea and launched his war in the Donbass (a region of eastern Ukraine).

In 2017, I sat down with Vladimir Kara-Murza, the Russian democracy leader. Speaking of poisoning: Twice, Kara-Murza has been poisoned, and twice he has survived. He persists in his work. He is a very brave person.

I asked him, in the course of our interview, “Why is Ukraine important, in the context of Russia?” He said, “The most important motivation of Mr. Putin’s aggression in Ukraine was not geopolitical. It was not related to foreign policy. It was domestic. It wasn’t about ‘sphere of influence’ or restoring the old Soviet empire, although these things might have been added benefits, from the regime’s point of view.”

No, said Kara-Murza, “the most important motivation was domestic, at least as I see it.”

In Kara-Murza’s estimation, Putin fears a Ukrainian-style democratic uprising in Russia. “That may sound unlikely now,” he told me. “It was unlikely in Ukraine, too, until a few years ago.”

(I wrote up my conversation with Vladimir Kara-Murza in three parts: here, here, and here.)

• When I was a kid in Ann Arbor, Michigan, I believe we had toilet paper with Woody Hayes’s image on it. (Woody was the great coach of our football rival, Ohio State.) Well . . . some Putin TP: 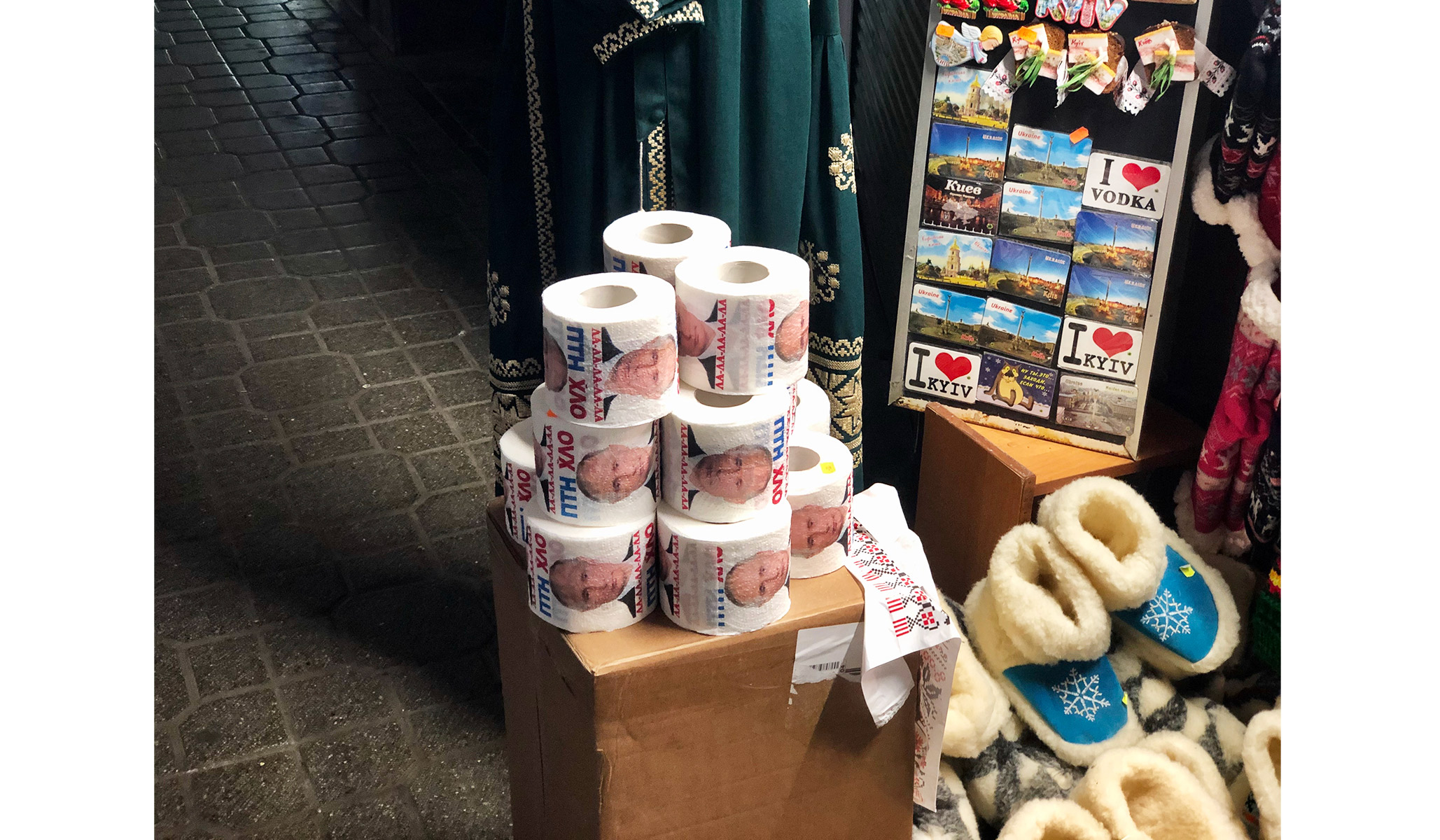 • Speaking of my hometown: An Ann Arbor company is in action here! 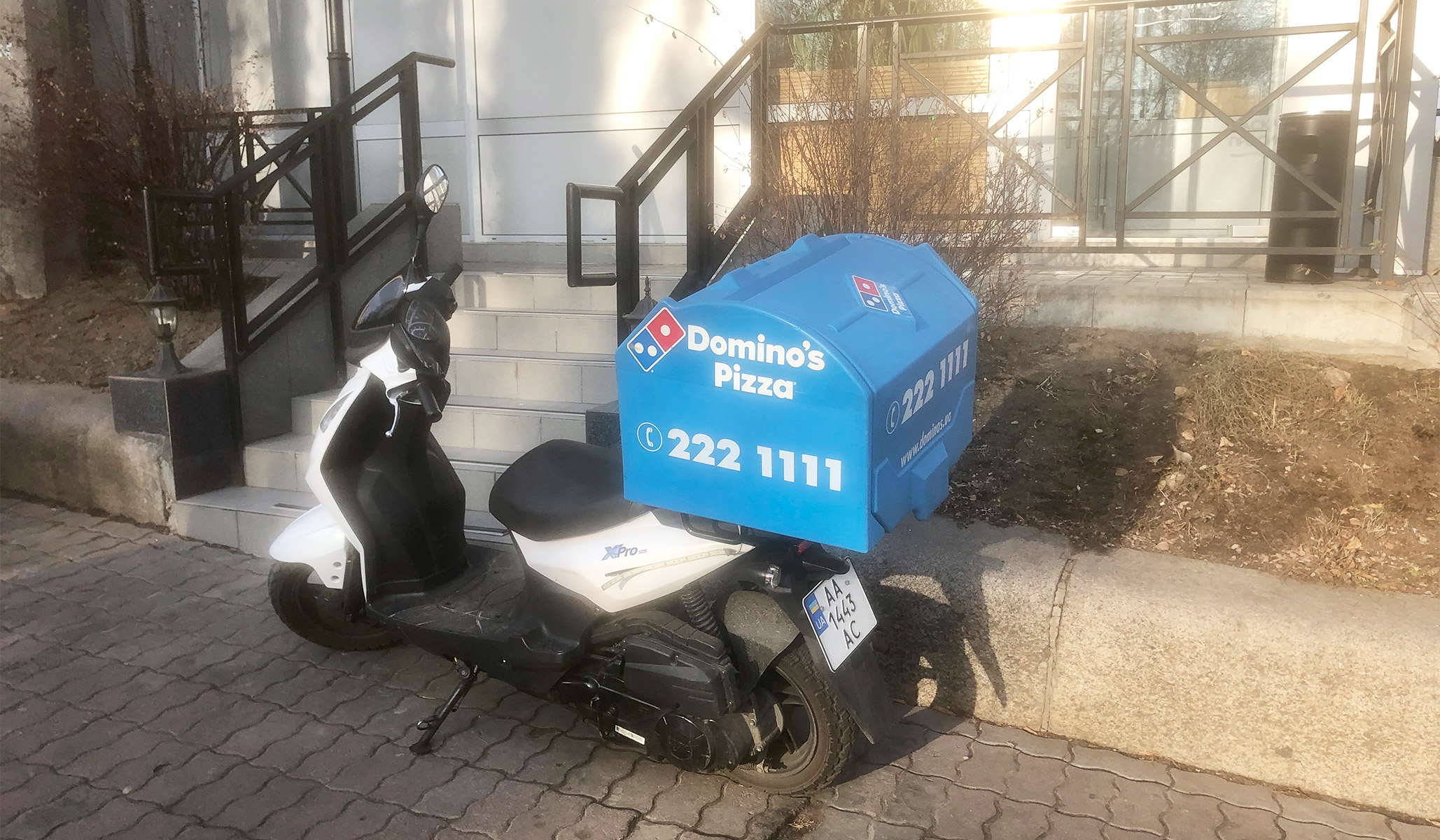 • This is rather lovely, don’t you think? 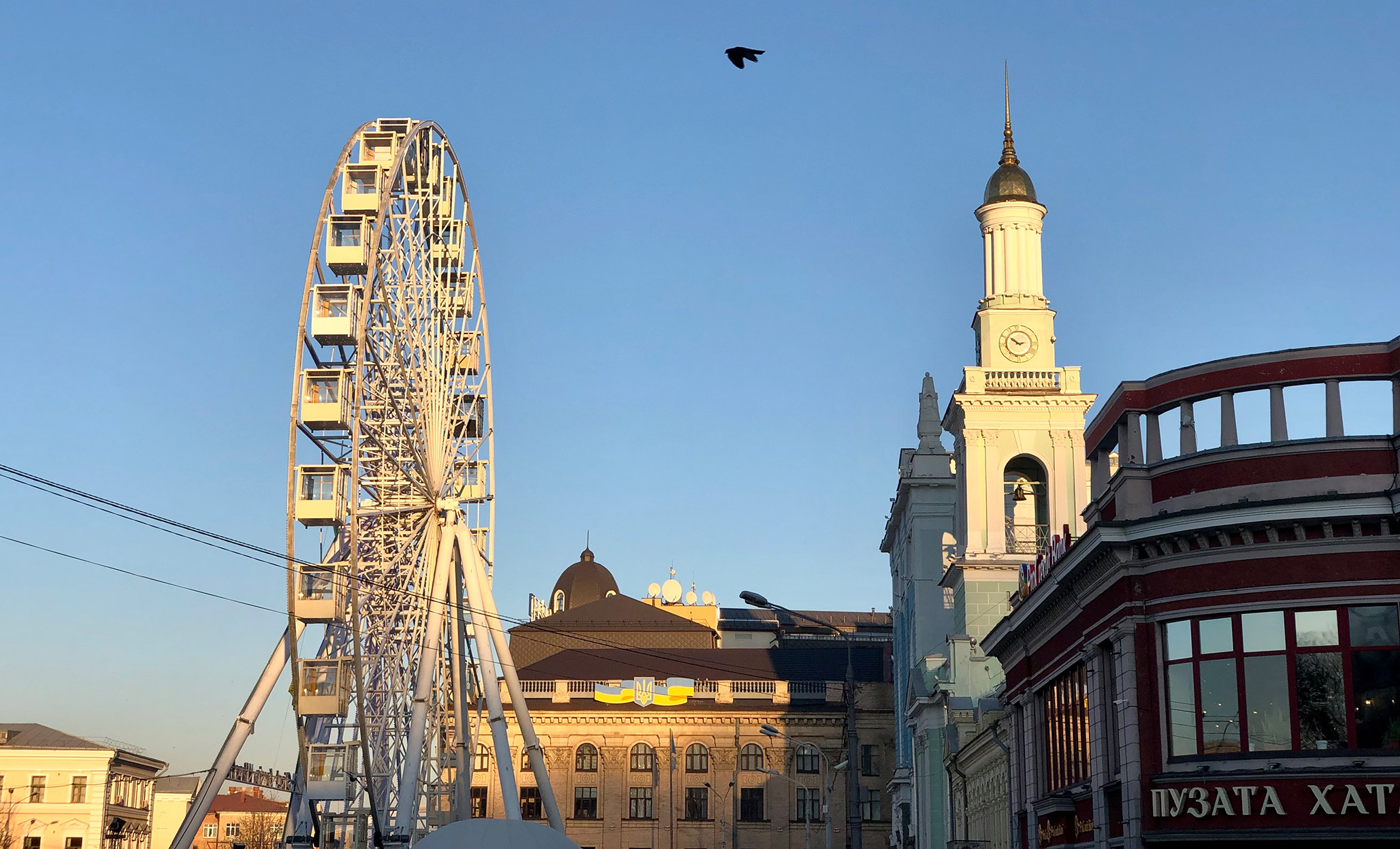 • On the streets, French fries are advertised (in English) as “Belgian potatoes.” Let me quote a little Wikipedia: “The French and Belgians have an ongoing dispute about where fries were invented, with both countries claiming ownership.”

I’m not getting into the middle of that one. I’m just eating the fries.


• I walk into a restaurant at about 10 p.m. and a lovely young waitress says something to me. I say to her, “Did you say ‘Buon giorno’?” Indeed, she did. It turns out, this is an Italian-themed restaurant. And the employees are instructed to greet people that way. (I do not tell her that “Buon giorno” is not used — at least in Italy — after il pranzo, i.e., the midday meal.)

• After I order a Coke — a Coke Zero, specifically — a young waiter says to me, brightly, “Maybe ice?” Oh, he knows his customer, bless him. I touched on the subject of Americans and ice in an article earlier this year, here.

• It is frustrating to be illiterate — not to be able to read the alphabet around you. I’m not talking about the language. I’m talking about the alphabet. I don’t speak Hungarian, let’s say, but if I were at the opera house in Budapest I could read the names in my program. I could say that so-and-so was singing the part of Judith in Bluebeard’s Castle. In Kyiv, no . . .

• Eventually, I recognize the word for “Entrance” — as on doors. I feel like a toddler, making a happy discovery . . .

• Don’t you wish you had invested in Zara, the Spanish clothing chain? My gosh, I see them all over the world! They’re virtually as ubiquitous as McDonald’s! (“McDonald’ses”?)

• In Ukraine, you can take a Chernobyl tour. People find it fascinating. It is particularly popular, I think, following a television series on the subject — the subject of that nuclear accident that occurred in 1986. The Chernobyl plant was outside the Ukrainian city of Pripyat, now a ghost town.

• Here in pleasant, interesting Kyiv, you can forget that there’s a war on. “Sitting in this hipster coffee shop,” says a friend of mine, “you would never know, would you?”

On one of the main drags here, there is a sign — more like an exhibit, set up by the Ukraine Crisis Media Center. It shows a calendar, with various casualties on given days. It also says the following (in both English and Ukrainian, though I will quote the English, of course):

Every God-given day,
Whether we are at work or studying,
Out on a date or at the movies,
Hiking or relaxing by the seaside,
Has been paid for with blood, and with the lives of Ukrainian servicemen and women.
More than 4,000 Ukrainian soldiers have sacrificed their lives.
More than 15,000 got wounded.
We have paid for it every single day we have lived in peace.

Overall, more than 14,000 people — soldiers and civilians — have been killed in this war.

• There is a long wall — reminding me a little of the Vietnam Memorial in Washington — commemorating the Ukrainian soldiers who have died in the war. The heading on the wall is “Servicemen of the Military and Law Enforcement Who Died for Ukraine’s Unity.” (This has been translated for me.) The dead are grouped roughly by dates. Unlike on the Vietnam wall, there are photos of them. Here is a photo of mine: 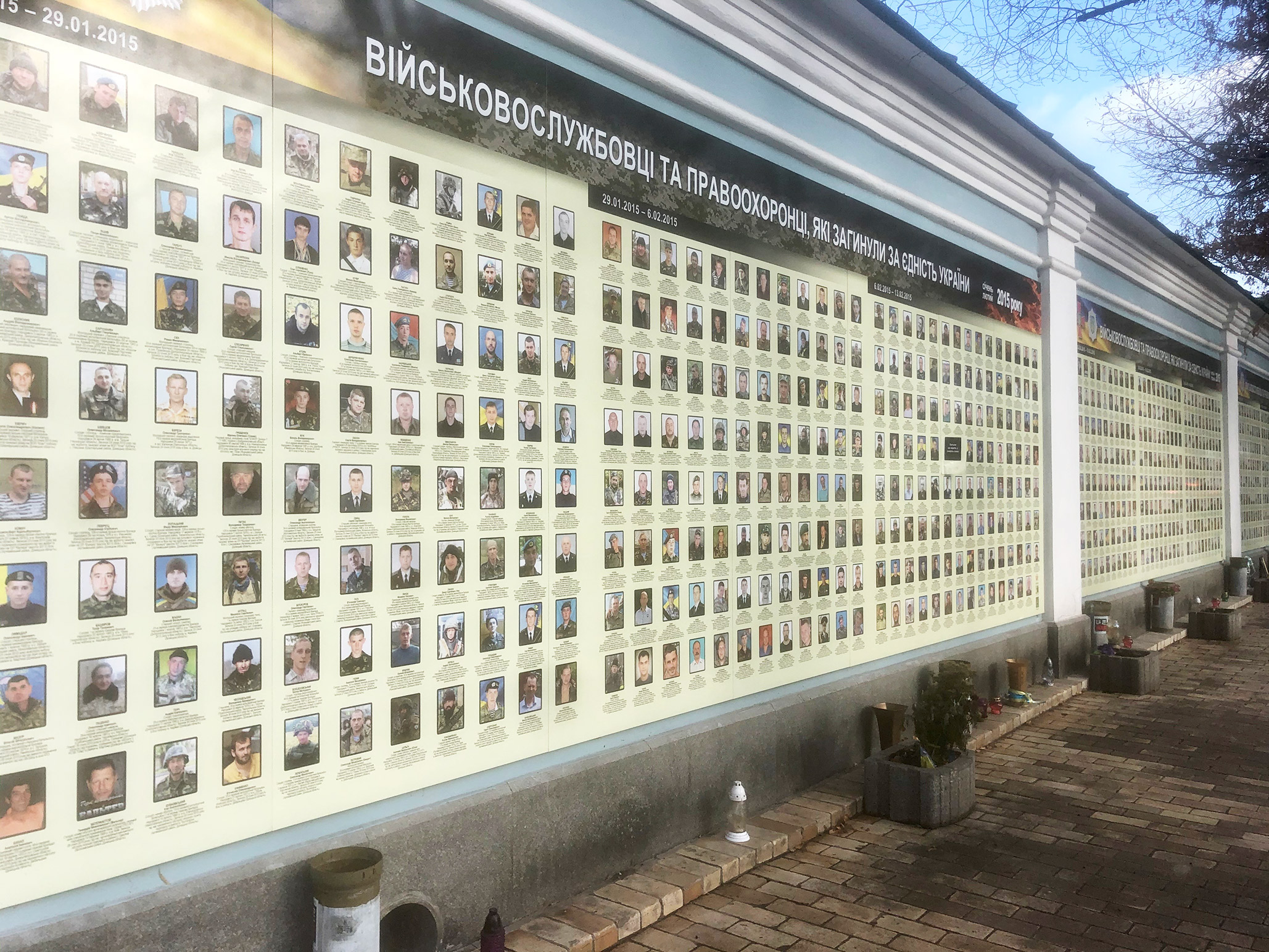 Last August, John Bolton and William Taylor laid wreaths at this wall. (Bolton was then President Trump’s national security adviser and Taylor is the acting U.S. ambassador to Ukraine.) After Bolton resigned, I wrote a blogpost about him, which was topped by a photo of him and Taylor at the wall: here.

• Would you like to see a face of Ukraine? She’s annoyed at me for taking her picture, I’m sure, and I feel guilty about it — but I like the picture, and it is a wonderful, wonderful face: 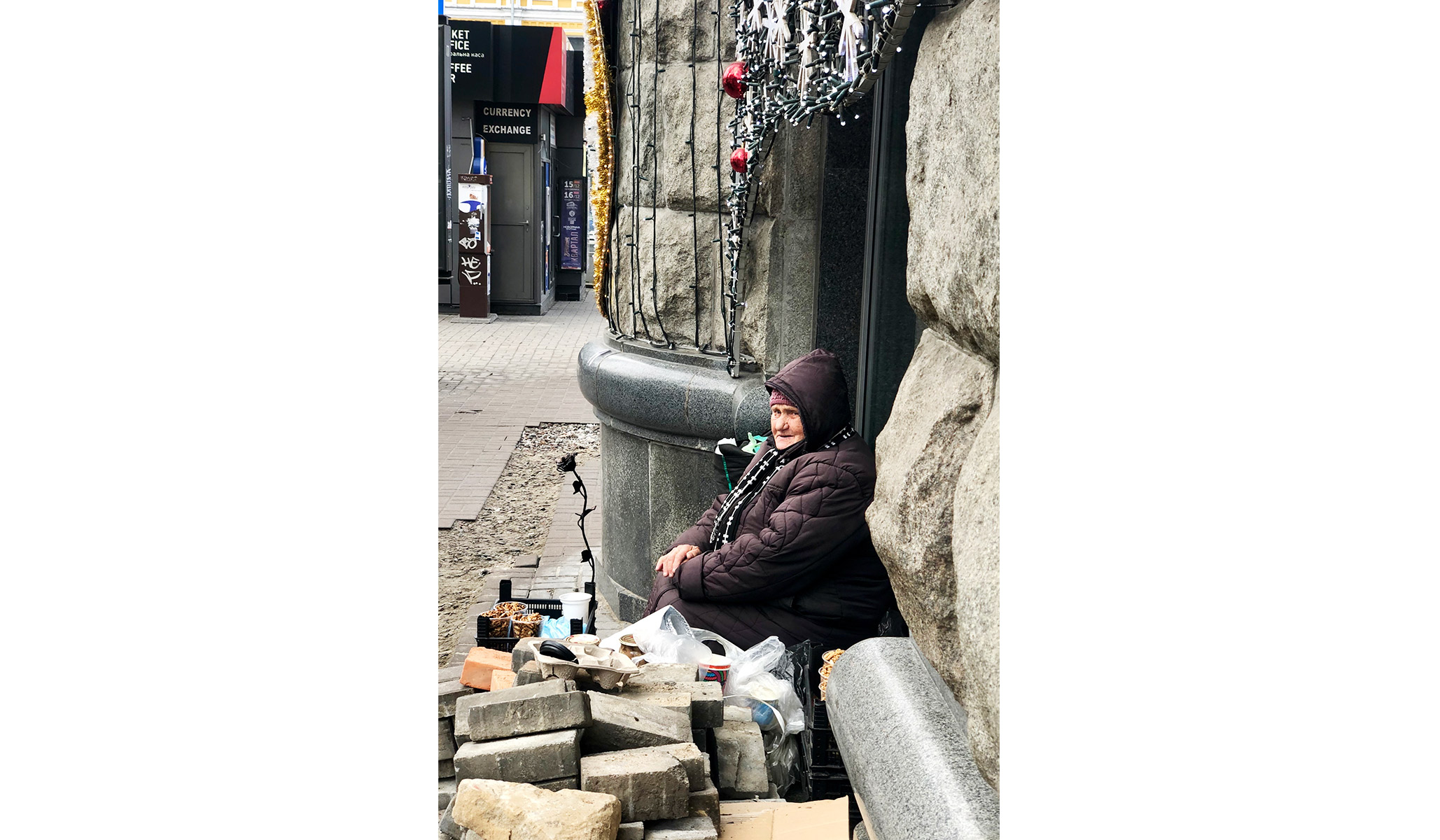 • Rudy Giuliani is in town at the same time I am. (We don’t meet up.) He meets with some very dodgy characters: “the kind he used to prosecute in New York,” more than one person remarks to me here. (One of these people adds, “He’s obviously good at picking them out.”)

Let me recommend a piece in the Kyiv Post, by Matthew Kupfer and Oksana Grytsenko: “The strange and meteoric rise of Giuliani’s favorite Ukrainian ‘whistleblower.’” Amazing and instructive.

I would also like to quote from a piece by Christopher Miller at BuzzFeed:

Giuliani, who is being investigated by federal prosecutors looking into whether he violated federal lobbying laws, is on a mission to “destroy” the Democrats’ impeachment narrative via a documentary series on the vehemently pro-Trump One America News Network (OAN). But judging by the questionable cast of Ukrainian characters he’s meeting, whatever information he manages to dig up is likely to be extremely dubious. “I’m just a country lawyer trying to show his client is being framed. I will do it,” Giuliani told Fox News.

As you know, two of Giuliani’s cronies were arrested at Dulles Airport, as they tried to fly away. One of them owns a company called “Fraud Guarantee”; the other owns a nightclub called “Mafia Rave.”

Which reminds me: There is a restaurant chain here . . . 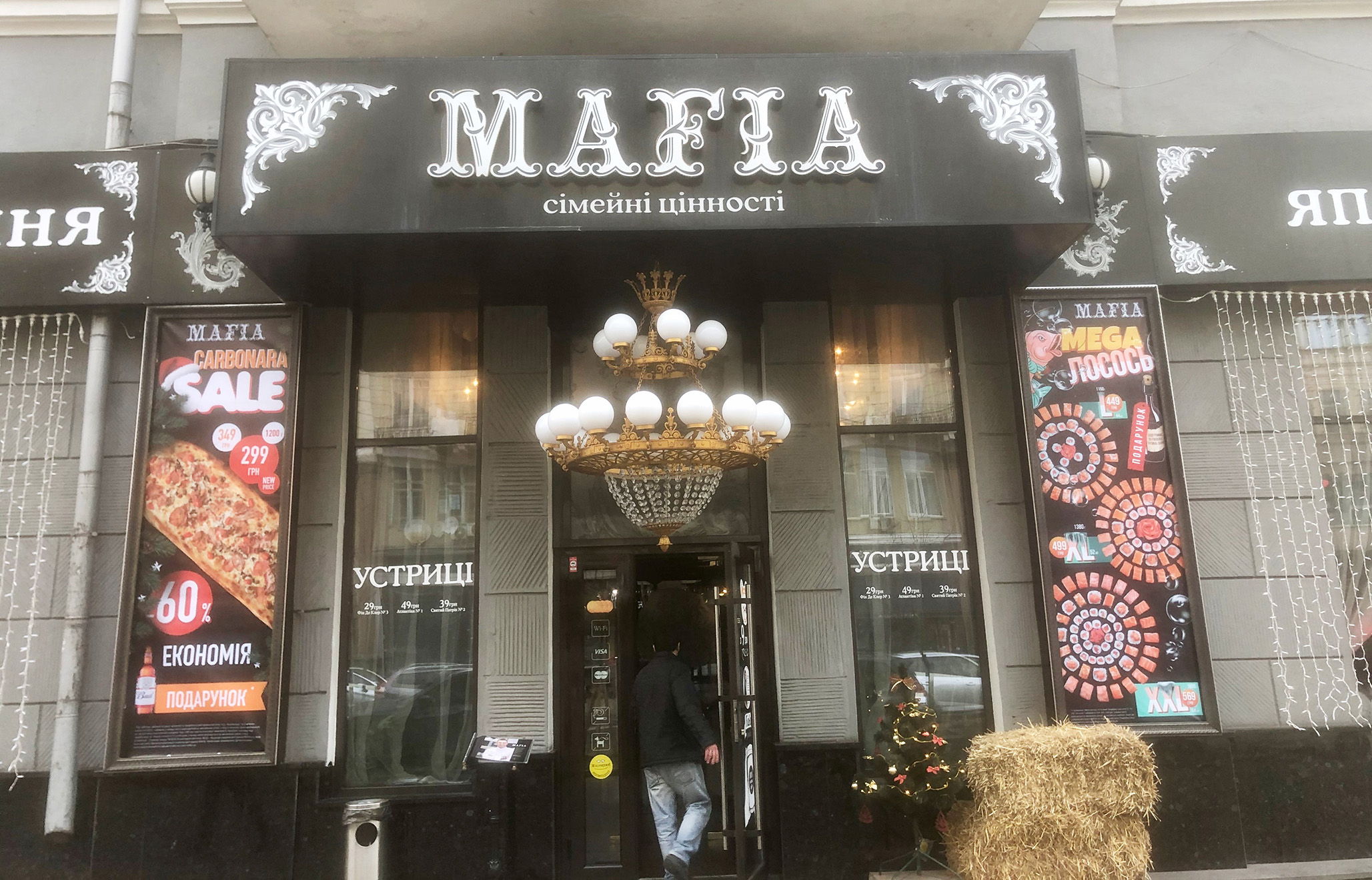 I consider Rudy a tragedy as much as anything else. He was a great mayor, “well-nigh salvific,” as I have long said. I wrote about this in September, here. The example he set as mayor of New York endures. The example he is setting now . . . well . . .

Thank you for joining me today, ladies and gentlemen, and I’ll see you tomorrow for Part III.