As a symbol of the Democratic establishment’s failures, Clinton is the wrong surrogate to attack Sanders.

To Hillary Clinton, sniping at Senator Bernie Sanders as he again contends for the Democratic presidential nomination must seem like well-earned payback. How better to explain her recent denunciation of Sanders as an unlikeable, isolated, unaccomplished, “career politician”? As far as she’s concerned, the excitement that Sanders generates among the party’s liberal base is “all just baloney.”

Many in the party establishment who loyally backed Clinton in 2016 have come to believe that an intervention is needed to ensure that Sanders doesn’t win the 2020 nomination. But while her potshots represent her feelings as well as those of many other Democrats who see Sanders as a loud-mouthed bully, Clinton isn’t the right person to lead the anti-Sanders charge.

In every public statement she’s made since her defeat at the hands of Donald Trump in November 2016, it’s been clear that Clinton has not yet learned to rise above the resentment she bears against those she blames for the loss. And few rank higher on the list of such people than Sanders. The unexpected success of the Vermont Socialist’s upstart primary challenge still rankles her. Despite his age and extremist views, Sanders seemed better able to harness the excitement and energy of the Democratic base than the woman who was supposed to break the political glass ceiling. He didn’t just win 23 states and 46 percent of the elected delegates; he also helped reinforce her image as an arrogant, entitled, insincere, out-of-touch insider, severely damaging her ahead of the clash with Trump.

Four years later, Sanders is faced with a more complex challenge. Where then he had only to worry about Clinton, now he is just one among four contenders in a first tier that also includes Joe Biden, Pete Buttigieg, and Elizabeth Warren, with Amy Klobuchar and the cash-rich Michael Bloomberg lurking on the margins hoping to break out of the pack.

But while party leaders are encouraged by Biden’s ability to hold on to his lead in the national polls despite a rocky campaign and many gaffes, their expectation that Sanders would fade after his heart attack last fall has not been fulfilled. Polls show that he is currently in second place in a tight race in Iowa, has a slim lead in New Hampshire, and is running a strong second to Biden nationally. The fact that the latest CNN poll has him vaulting 13 points from December to take the lead from Biden for the first time must scare those Democrats who fear his leftist insurgency.

As Jim Geraghty points out, many mainstream Democrats resent Sanders’s tactics, from his campaign’s misleading attack on Biden’s Social Security policy to Warren’s allegation that he told her a woman couldn’t be elected president to the arrogance of his “Bernie Bro” activists. But those who think Clinton’s attacks will hurt rather than help him misunderstand why he did so well in 2016 and why he’s a genuine threat to win in 2020.

While Clinton may still have some support within the party among those in denial about how and why Trump won, many Democrats hold her responsible for the failure of her campaign, and they’re tired of her unwillingness to take responsibility for it rather than continually blaming Russia or the misogyny of Trump’s “deplorable” voters. Singling Sanders out as the one Democrat running whom she cannot abide plays into that narrative and reinforces the sense that the party establishment is still out to get Sanders.

That sense — that Sanders is the one true populist insurgent who speaks up for the party base — is the Vermont senator’s greatest strength. It helps him avoid accountability for the radicalism of his movement, which would otherwise be unpalatable to many middle- and working-class Democrats. So in a tight race, the spectacle of Clinton and her establishment cohorts still working to defeat Sanders may be exactly the boost his campaign needs. 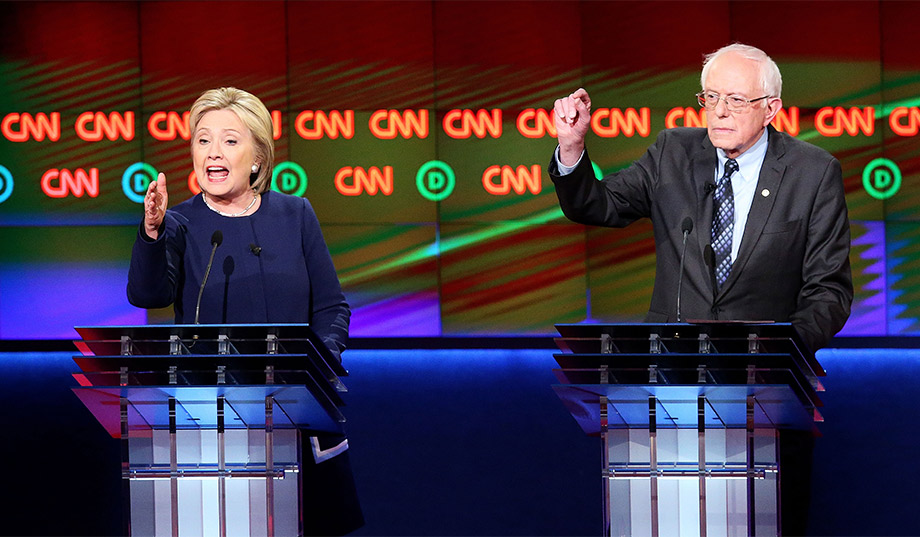