‘Hypocrisy,” said La Rochefoucauld, “is a tribute that vice pays to virtue.” Similarly, dictatorship pays a tribute to democracy — by arranging for democratic fig leaves. Vladimir Putin, for example, has gone through some constitutional mumbo-jumbo to ensure that he is dictator-for-life. Why did he feel the need to do that? Why couldn’t he just . . . you know . . . rule?

In Haiti, Papa Doc wanted Baby Doc to succeed him. But the constitution said you had to be at least 40 years old to become president. Papa Doc revised that downward, to 18. For good measure — to cross every democratic “t” and dot every democratic “i” — he held a national referendum: Did the Haitian people approve of Baby Doc as the next president? They did: by a vote of 2,391,916 to zero.

Look, even Saddam Hussein staged a referendum. Would the people like him to rule for another “term”? The answer was resounding. In a 100 percent turnout, 100 percent of Iraqis said yes.

I recommend a column by Vladimir Kara-Murza, the Russian democracy leader, on the recent Putin business: here. “Dictatorship and term limits rarely go together,” he begins. And he ends, “The only force that can hinder Putin’s plans for lifetime rule is organized public resistance from Russian citizens. How strong it will be is now the only real question.”

• The International Olympic Committee has warned athletes that they are not to engage in political protests at the 2020 Summer Games in Tokyo. Such protests would include kneeling, hand gestures, and armbands.

You remember the most famous protest: The image is “iconic.” At the 1968 Summer Games in Mexico City, two American sprinters, Tommie Smith and John Carlos, thrust their arms upward while on the medal stand. They were making a statement about civil rights back home.

More recently, at the 2016 Summer Games in Rio de Janeiro, an Ethiopian marathoner, Feyisa Lilesa, crossed his wrists as he crossed the finish line. What was he signaling? He was signaling his support for the Oromo people, to which he belongs, back home. The issue was forced relocation.

Said the IOC in its new warning, “It is a fundamental principle that sport is neutral.” Well and good. In general, I suppose, I support a separation of politics and sports, as of politics and art.

But some cynical observers — you might call them realists — spied a motivation in the IOC’s warning. The concern was not Tokyo 2020, they thought, but Beijing 2022. There is a lot to protest in China — including the imprisonment of more than one million Uyghurs in a gulag.

(Let me add: At the 1936 Olympics — both Winter and Summer — I would have wanted protests galore.)

(As my regular readers know, I don’t believe that the Olympics should be held in a police state, period.)

• Only one Iranian woman has ever won an Olympic medal. She is Kimia Alizadeh, who won a bronze in taekwondo at Rio. She is now 21 and has defected in Europe. The remarks she made, upon her defection, were moving.

She said that she was “one of the millions of oppressed women” whom the Iranian regime has been “playing with for years.” She continued, “They took me wherever they wanted. I wore whatever they said. Every sentence they ordered me to say, I repeated.” And so on.

“None of us mattered to them,” she said. “We were tools.” And she could no longer stand to “sit at the table of hypocrisy, lies, injustice, and flattery.”

Defection is almost never easy, for anybody. (For one thing, it can be dangerous, as well as wrenching.) Of her own defection, Alizadeh said, “This decision is even harder than winning the Olympic gold.” But “I remain a daughter of Iran wherever I am.”

There is someone to make a whole country — so cruelly governed, for all this time now — proud.

• Last week, I did a Q&A podcast with Marina Nemat, one of my favorite people: an Iranian dissident, a former political prisoner, and a human-rights campaigner. We spoke of Kimia Alizadeh and much else. A smart, discerning, and soulful person, Marina. Go here.

• In 2015, I wrote a piece called “A Question of Honor.” Its subtitle was, “As the wolves circle, Iraqis who helped us are pleading for visas.” Last August, Ryan Crocker wrote an op-ed piece for the Washington Post headed “We can’t leave Afghanistan without protecting our closest allies first.” (Crocker was our ambassador to Afghanistan, as to Iraq and several other countries.)


This is a terribly important issue.

In Chicago recently, I met an Afghan who helped us out as a translator and guide. He started doing that work when he was 19. He is now 30, and building a life here. Back in Afghanistan, he accompanied our Special Forces for a year. They give you a gun if you do that, he told me. If you accompany the Army or the Marines, no. (They certainly give you body armor.) He accompanied Marines for several years. He saw many battles.

What will Afghanistan be like if the U.S. pulls out altogether? This fellow is worried — indeed, he is confident that the country will become a playground for the Taliban, Daesh, and other terrorist groups. This will be bad for Afghans and others (including, possibly, Americans).

He will soon become an American citizen and is very excited about the prospect, and proud of it. Earlier in life, he wanted to be a journalist. He learned many languages — he is almost a collector of languages. The Afghan tongues, plus Urdu, plus Hindi, and others. His English is easy and natural. He is now picking up Spanish, here and there.

He does not think he will become a journalist, though. He does not have the money or time for further education, he says. He has to work to support his family: both here in the U.S. (wife and kids) and back in Afghanistan (parents et al.).

I would not count him out, however. The guy is energetic and smart — and would make a fine journalist, I wager.

Anyway, just an encounter, which I thought some might like hearing about. (Not all, of course. You can never please all, I discovered long ago: even with hot-fudge sundaes.)

• In recent months, Central European University, citing a hostile political environment, decamped from Budapest to Vienna. Most of my friends said “good riddance” to “Soros’s university.” (It’s funny how often the name “Soros” comes up, in everyday conversation. I think the Right says “Soros” more than the Left says “Koch.”) Other people found this a troubling sign of an increasingly illiberal atmosphere.

Have you heard the latest? While CEU moved out, a Chinese university is moving in. Fudan University, of Shanghai, will establish a campus in Budapest — the first campus ever established by a Chinese university abroad. A Hungarian official said he expected this move to “promote additional Chinese investments in Hungary and the establishment of research-and-development centers of Chinese companies in Hungary.”

Oh, yes. Whether this will be good for democracy and freedom, there is reason to doubt. In any event, this agreement between Hungary and China looks like the future. There will be a lot more where that came from, I’m afraid.

Orbán and his supporters say they are for “illiberal democracy.” But you can bet that the “democracy” part fades while the “illiberal” part grows ever stronger.

• On Tuesday, Jack Nicklaus turned 80. Let me give you a memory. In about 1990, some friends and I were sitting around, playing an interesting game: If you could invite three people for a dinner of four, who would they be? We took religious figures and family and friends off the table. We were talking about personages such as Shakespeare, Bach, Helen of Troy, and Lincoln.

• My eyes widened as I saw this sign at the University of Chicago — the word “Oriental” in particular. That now seems such a verboten word. In this case, it refers to the Near East, or what most of us would call the Middle East. 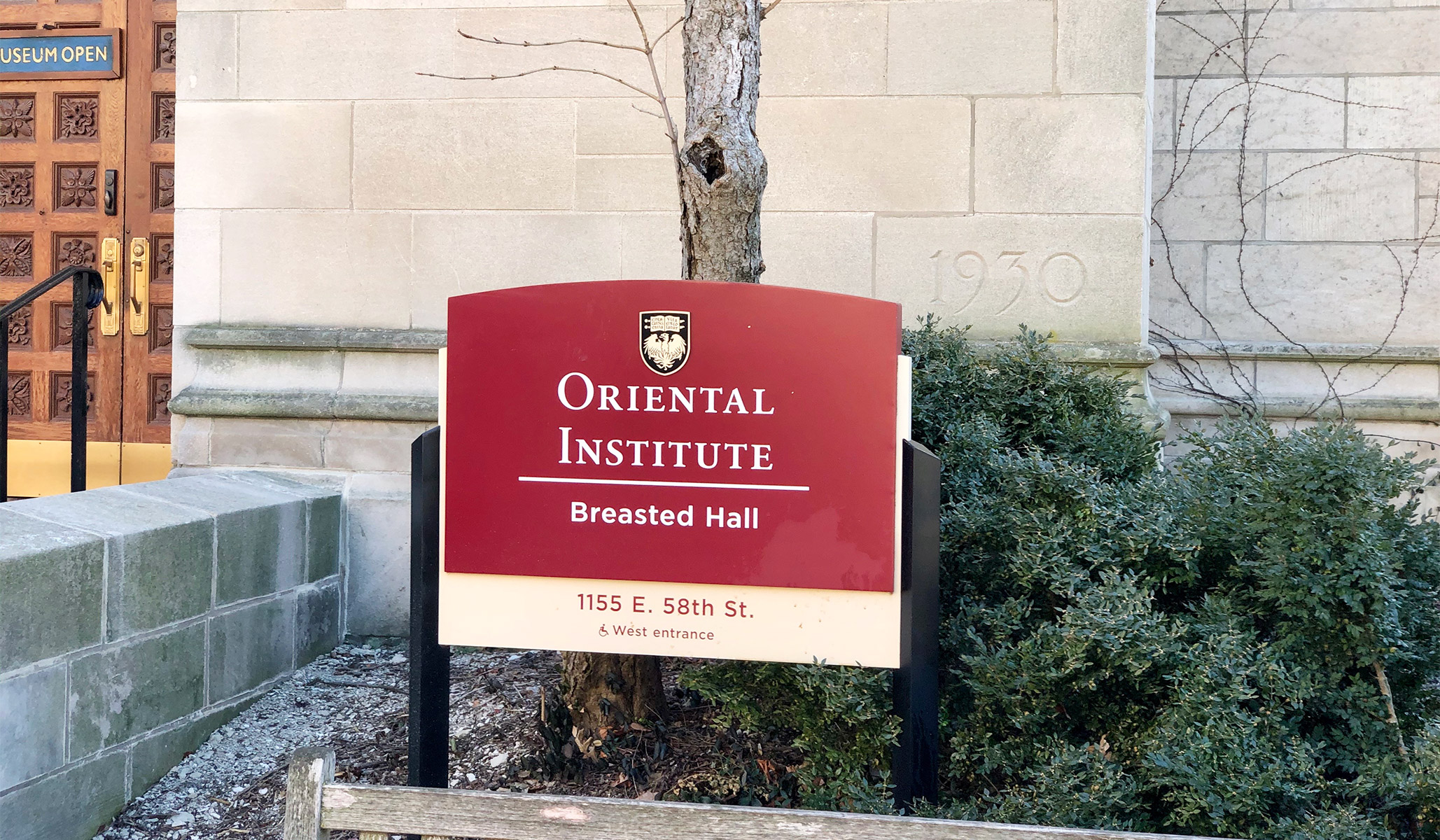 • I saw a sign in Greektown, Chicago: “Our Culture, Your Adventure.” Good slogan.

• In the last few days, I have been at Cedarville University, in Cedarville, Ohio — wonderful experience. The first question posed to me by a student was: “What’s Kevin Williamson like?” It was a pleasure to answer . . .

• A banner on campus: 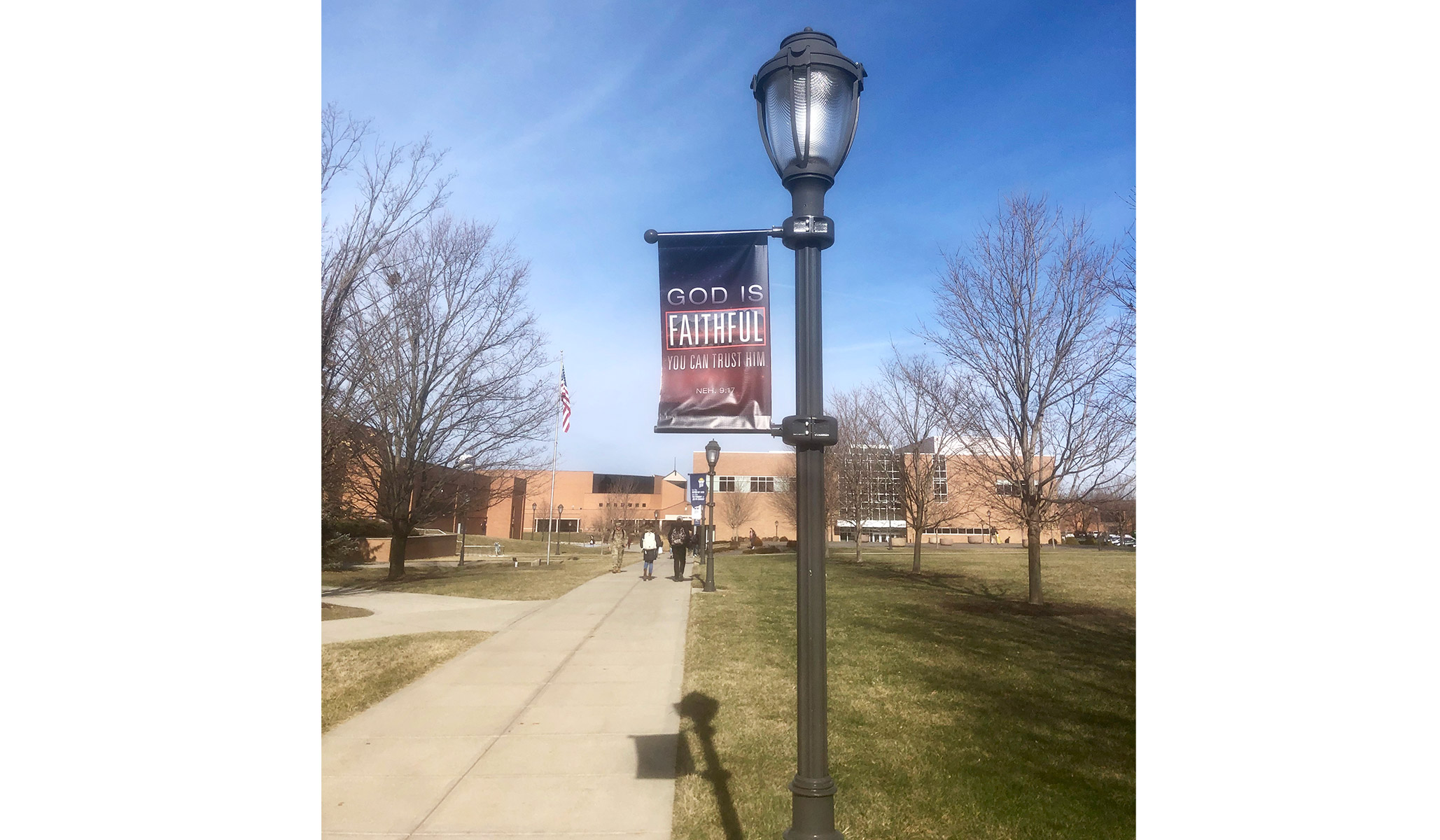 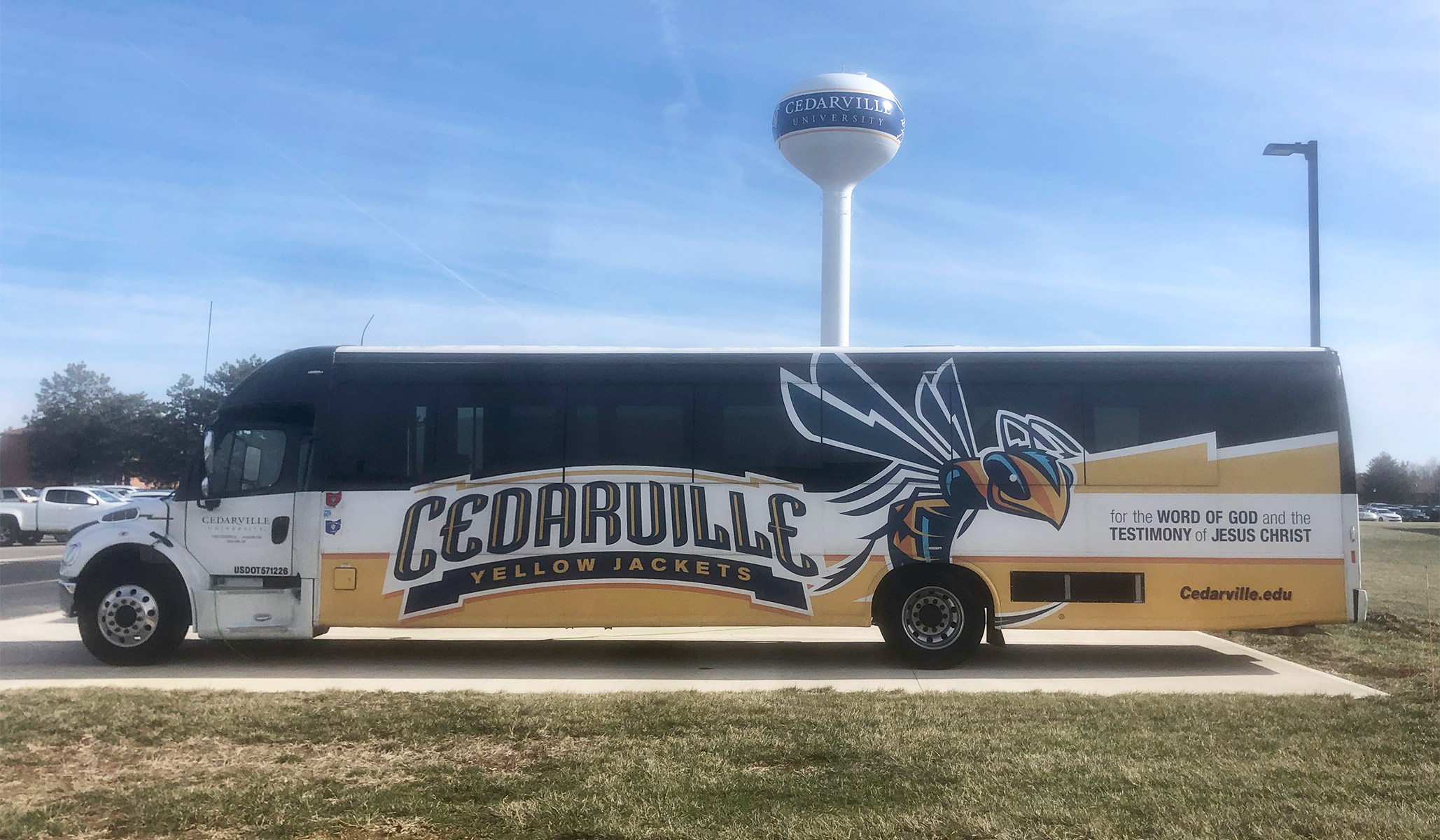 • Speaking of food, this place was calling to me, big-time: 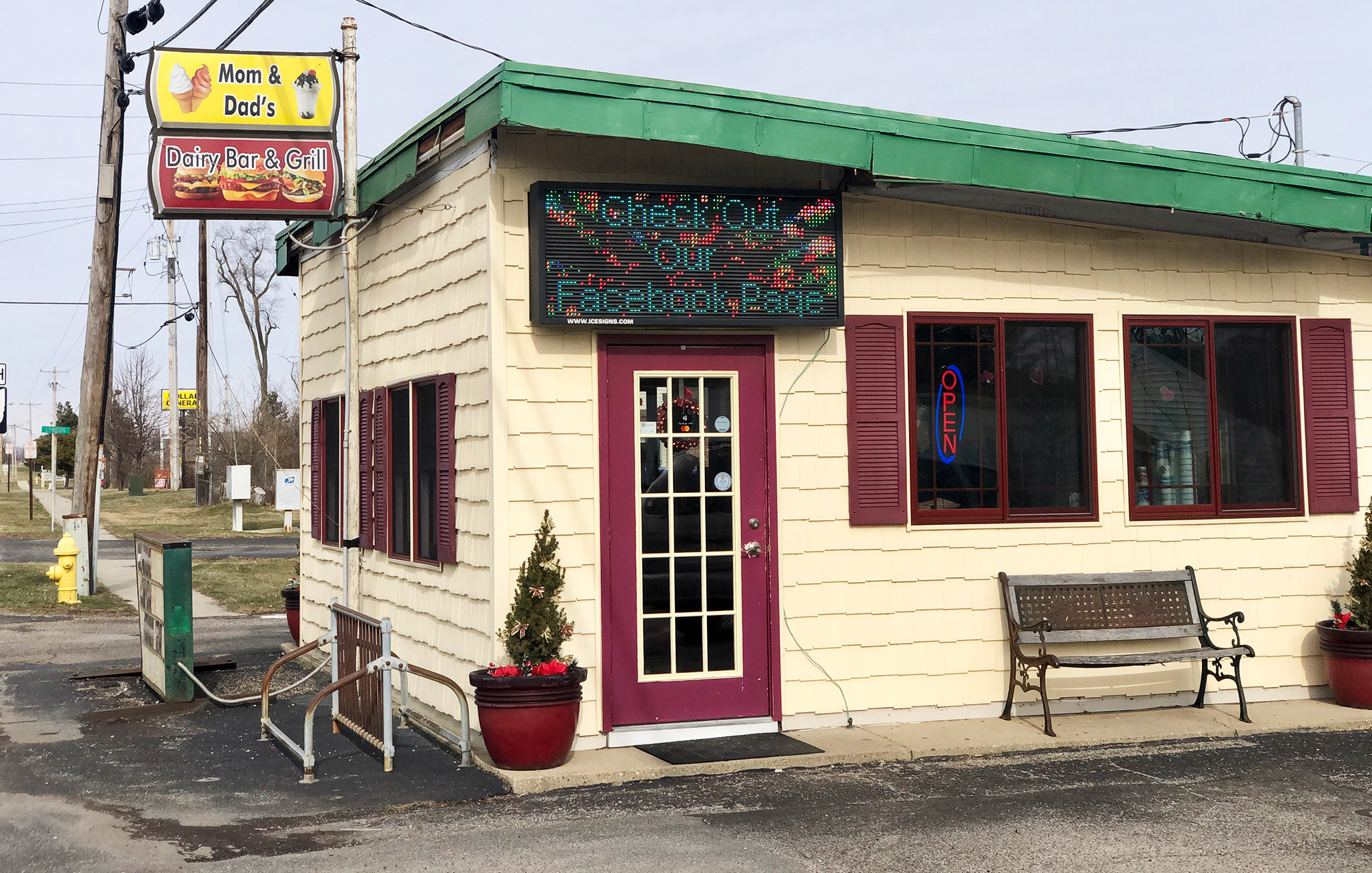 • At a local hotel, there were candy bars, chips, etc., for sale — set up near the registration desk. You put the money in a box (I believe): on the honor system.

• Met a professor — a senior professor — who has an interesting reading habit: He and his wife read books together, out loud. In the evenings. Nice, huh?

• I figured we would end with a cute-kid story — hope you won’t mind. An adorable, very stylish three-year-old girl was looking at my tie, turning it over in her hands. “I like your bow,” she said.