The central bank can’t stop a supply shock, but it can mitigate the fallout.

Sometimes it takes a crisis to see things clearly. The coronavirus and the growing anxiety over its spread make it apparent that our global financial system can easily turn a large supply shock into a large demand shock. Many observers want to delineate these two shocks, but the sharp plunge in financial markets over the past week and its implications for future spending show that such demarcations are no longer possible. And this means that there is a constructive role for the Federal Reserve to play in this crisis.

It is true that the ongoing breakdown of global supply chains, the labor force, and trade — the result of the coronavirus — is a textbook case of a negative supply shock. The Fed cannot reverse that: Monetary policy will not open padlocked factories, heal the sick, or end travel restrictions. But the Fed can, and should, respond to the spillover effects that, left on their own, could become more destabilizing than the original supply shock.

These spillover effects are threefold. First, the decline in the productive capacity of the economy means that the profitability of machines, plants, and factories has fallen. The return to capital, in other words, has declined, which will hurt investment. As a result, there will be less demand for credit, which will drive down market interest rates. Consequently, the Federal Reserve will need to lower its interest rate target just to stay neutral.

Second, the uncertainty and fear surrounding the coronavirus has led to a fire sale in the stock market while increasing the demand for safe assets such as treasury bonds. While some sell-off in the stock market was to be expected, the actual 10 percent–plus correction this week looks more like a self-fulfilling “doom-loop” that, left untreated, could metastasize into a sharp collapse of aggregate demand.

A growing doom loop was also evident this week in the historic drop of safe asset yields: the ten-year Treasury yield fell to an all-time low of 1.1 percent. This elevated demand for safe assets, in turn, implies a big decline in the use of money (or, the velocity of money). The figure below shows that as Treasury yields fall, so does money velocity. If the Fed does not offset this decline in aggregate demand, it is passively allowing monetary conditions to tighten. 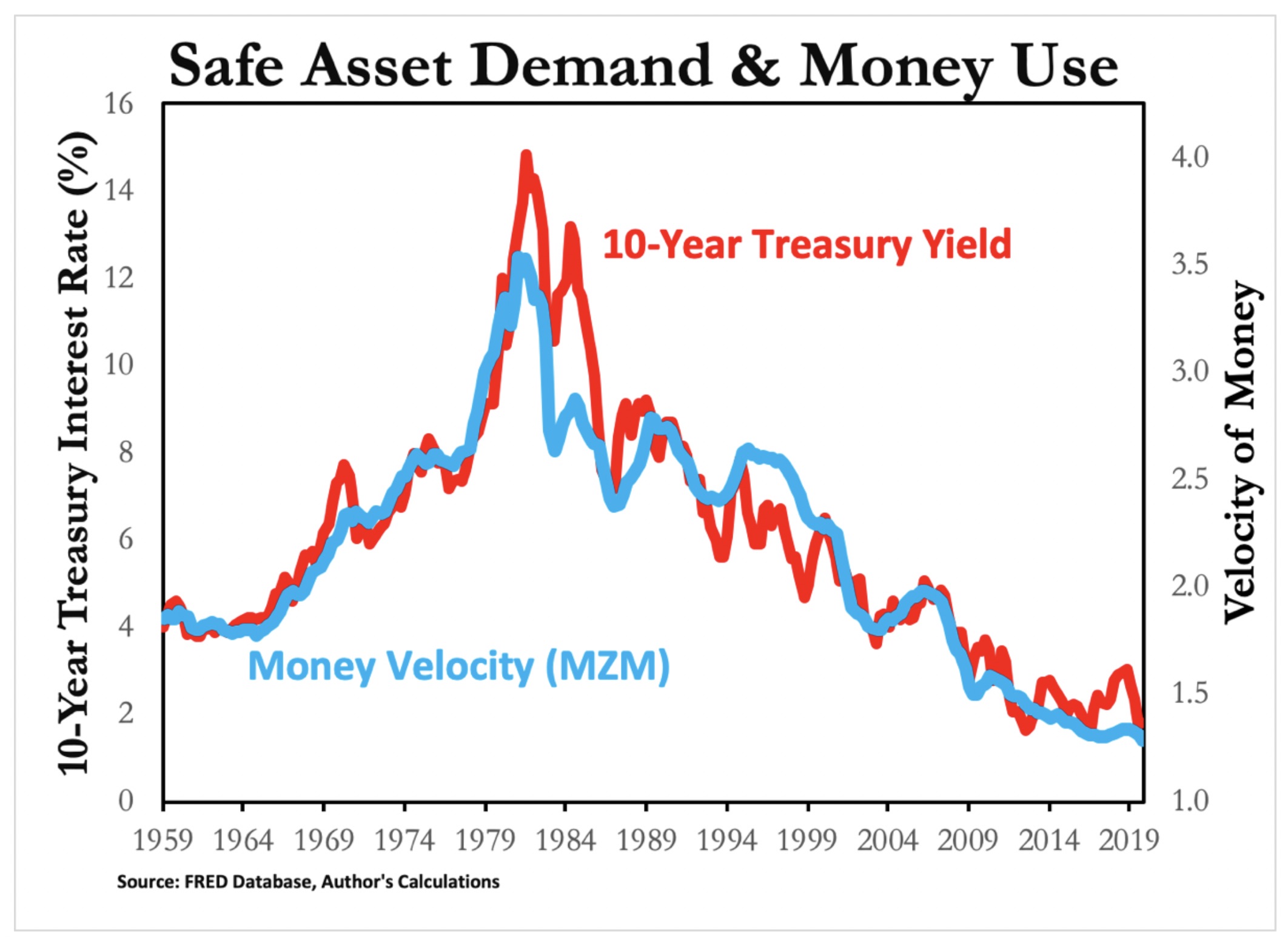 The third and final spillover effect is the amplifying power of dollar hegemony. The dollar has become the main currency of the world, as evidenced by the 50 to 80 percent of international trade being invoiced in dollars, the $28 trillion of relatively liquid, dollar-denominated debt held outside the United States, and the roughly 70 percent of the world economy being anchored in varying degrees to the dollar. These linkages give rise to what economist Hélène Rey calls a “global financial cycle,” where shocks to the dollar reverberate across the global economy. In the case of the coronavirus, the uncertainty and fear surrounding its spread may give rise to increased dollar demand, making dollars more expensive relative to other currencies and putting further strain on a world dependent on dollar use. This has not happened yet, but if it does, it, too, would need to be checked by the Fed to avoid a further reduction in aggregate demand.

These three spillover effects — the decline in the neutral interest rate, the financial-market doom loop, and the amplifying power of dollar hegemony — all show that there is a place for the Fed to constructively fight the negative effects of the coronavirus on the economy. Indeed, if the Fed fails to act, its inaction will amount to a passive tightening of monetary policy, which will reduce aggregate demand.

By doing nothing, the Fed is doing something.

And so far, it has signaled that it will do nothing. This has been costly not only for the stock market and aggregate demand, but also for the Fed itself. For by doing nothing, the Fed has allowed the ten-year Treasury interest rate to fall to 1.1 percent. This means that should the Fed eventually decide to ease, it will have already lost valuable interest-rate space. This will impede the central bank’s ability to cut interest rates, conduct large-scale asset purchases, and control the yield curve. If it leaves itself with no other options, the Fed may be forced to turn to the unfamiliar option of negative interest rates, which it currently does not want to do.

So how should the Fed proceed? It should make a number of confidence-reassuring gestures. It should announce a large cut in its target interest rate of 0.5–0.75 percent and commit to further easing if financial conditions continue to deteriorate. It should announce that it will meet more regularly and not be handcuffed by the officially scheduled Federal Open Market meetings. It should also announce the adoption of the proposed standing repo facility and consider expanding the number of countries with which it has currency-swap lines. These gestures would all signal an increased willingness by the Federal Reserve to fight the spillover effects caused by the coronavirus, and should both end the doom loop and keep aggregate demand from stalling.

No one knows how much supply-side damage the coronavirus will cause. What we do know is that the Fed can offset the spillover effects that will harm aggregate demand. It is time for the Fed to act.