Policymakers should instead embrace our existing, well-functioning student-aid system and improve upon it.

Former vice president Joe Biden made a stunning announcement last month: In a major leftward move, he would back Senator Bernie Sanders’s original free-college plan for families earning up to $125,000 a year.

News of this radical policy shift was lost amid coverage of the COVID-19 pandemic, and now there is a risk that it will escape the scrutiny it deserves.

There are at least two broad arguments against the Biden free-college plan. First, the problem it seeks to solve — unaffordable tuition at public universities — is extremely overstated. Free-college supporters argue that tuition at these public institutions — the only colleges covered by Biden’s plan — has risen to unaffordable levels, especially for students from low- and middle-income families. But this claim is usually based on published “sticker prices” at universities rather than the net prices that students actually pay after their financial aid is applied. In other words, free-college advocates measure college affordability before factoring in existing policies meant to make college more affordable.

A 2019 opinion piece in the New York Times by a former Obama administration staffer is typical of this approach. The article makes the case for a new federal funding stream intended to help public universities tackle rising and unaffordable tuition, which is effectively how the Biden and Sanders plans would work. The author cites sticker prices published by the College Board to demonstrate how unaffordable public institutions have become. There is no mention of what students pay after financial aid is applied. In fact, the author doesn’t discuss financial aid — including the large increases that President Obama signed into law and that remain in place today — at all.

There’s a reason for that: When you factor in student aid, the tuition picture changes dramatically: The prices that students from families earning less than $125,000 per year pay to attend four-year public colleges and universities have not increased nearly enough since the mid 1990s to justify the sweeping reforms that progressives support.

The chart below shows both the sticker and net prices for these students in inflation-adjusted terms from the 1995–96 academic year through the 2015–16 academic year, based on the available data from the U.S. Department of Education’s National Postsecondary Student Aid Study. These data are from administrative records that reflect all aid that students actually received, not just what they were eligible to receive. In the 1995–96 academic year, students paid about $2,000 (in 2015 dollars) on average to attend an in-state public university after their student aid was applied. By the 2015–16 academic year, that number had risen just $400, to $2,400. 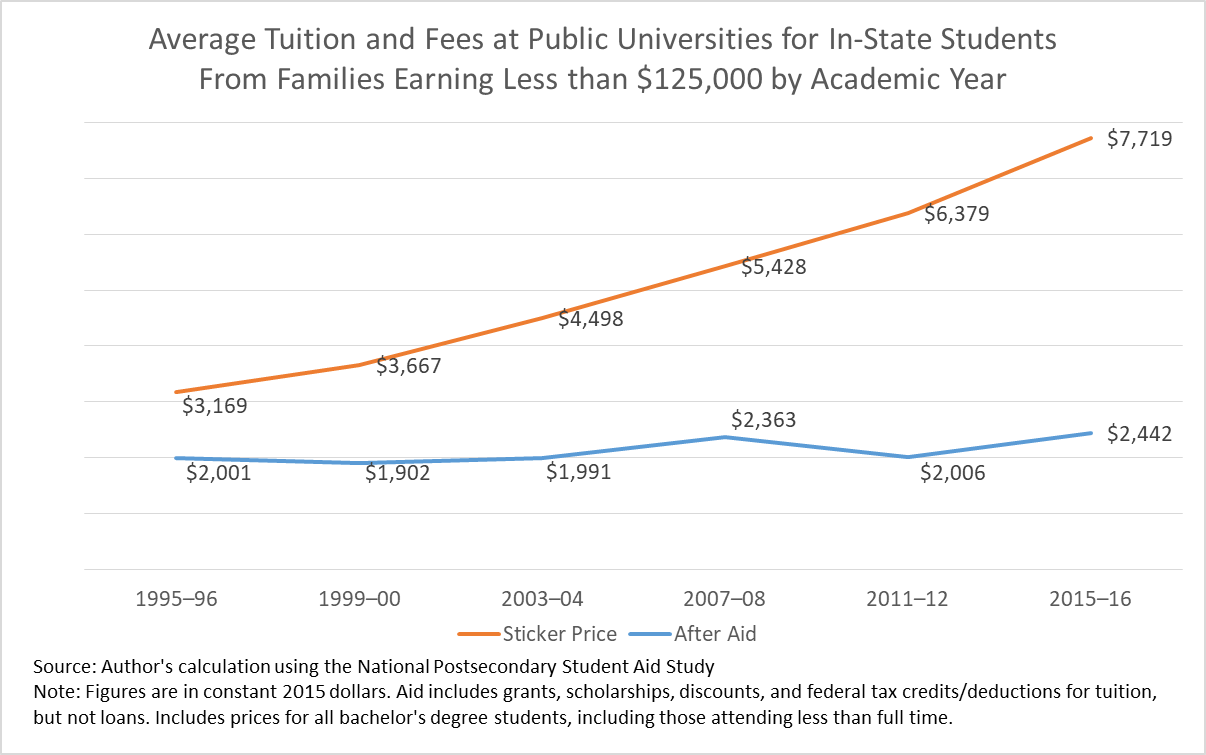 To be sure, the chart shows that sticker prices have increased rapidly at public universities. But, contra the claims of free-college advocates, students and families have not borne those increases, because financial aid from states, the federal government, and colleges themselves has increased nearly as much as sticker prices on a per-student basis. This suggests that the existing financial-aid structure made up of targeted grants, tuition discounts, scholarships, and tax credits is hardly the failure that free-college supporters make it out to be. One might even conclude that it seems to be working pretty well, at least from the students’ and the universities’ perspectives. At a minimum, the substantial amount of aid available to students suggests that the radical new approach to the issue proposed by Biden and Sanders is a solution in search of a problem. And make no mistake, the Biden/Sanders plan is certainly a radical new approach.

That is where the second broad argument against the plan comes in. Biden’s plan will change incentive structures in the higher-education system in a way that could exacerbate existing inequities, while giving decisions that have historically been the purview of states and universities to Washington, D.C.

At the core of the free-college plan is what progressive advocates call a new kind of “federal-state partnership” in which Washington would match state spending to fully subsidize tuition at public universities. Participation would be optional for states, and opting in would commit them to meeting a range of new federal requirements. Those requirements are the key centralizing feature of the plan, and as states and universities attempt to either game the system or tailor their new free-college plans to their own unique circumstances, the federal government is sure to impose more of them.

For example, as currently written, the Biden plan does not establish a ceiling on the new federal matching grants, so there is nothing to stop a creative state legislature or public university from re-categorizing a wide range of programs and initiatives as part of the cost of operating a public university system to pick up more federal money. Federal policymakers will inevitably respond to such behavior with a prescriptive list of what is and is not an allowable higher-education expense. (Think Medicare-fee schedules but for public universities.) There is a hint of this already in the plan: Anticipating that universities might try to make up for lost tuition revenue by hiring more low-paid adjunct faculty, it sets a strict tenured-to-non-tenured faculty ratio for public universities that opt in.

Biden and Sanders aren’t wrong to anticipate that universities might seek to cut costs when they can no longer charge tuition and are beholden to state governments for nearly all of their revenue. Instead of ramping up funding, budget pressures might cause states to scrimp on annual appropriations to universities even with the new federal matching funds. If that is the response, then the free-college plan is likely to restrict access to higher education, not expand it. When budgets are tight, universities curtail their enrollment capacity, allowing fewer students to attend. To be sure, the plan says participating states can’t cut their funding below current levels, but it does not require them to increase funding beyond those levels, nor even to keep up with inflation or enrollment growth.

Funding shortages and limited access aren’t merely theoretical effects of free college; they are a standard part of the international experience with it. For example, Finland offers free public universities, but it can’t afford to offer them to all citizens. Its universities end up rejecting two-thirds of applicants each year. And when public universities — especially the elite institutions — have to ration limited seats, they raise admissions standards, denying entry to low-income students who tend to have lower test scores than their more affluent peers. That exact pattern was what ultimately convinced Australia and England to abandon their free-college policies and start charging tuition decades ago. Access to higher education actually increased as a result.

In short, the Biden free-college plan would be a boondoggle. In seeking to solve an affordability problem that isn’t nearly the problem supporters of the plan have led us to believe, it would create much bigger problems. Policymakers should instead embrace the existing, actually successful student-aid system and improve upon it, rather than scrapping it for a radical, risky, expansive new federal program.

Why Is Andrew Cuomo Still Governor of New York?

Cuomo is a mean-spirited bully with a flagrant disregard for the rule of law, ruthless in defense of his own interests. New Yorkers deserve better.
Rob Ortt