Deliberate killing and unintentionally accepting a risk of death are very different things.

A  charge that one hears thrown around these days runs like this: (1) Reopening this or that segment of our economy or society will result in more deaths; (2) many people who are professedly “pro-life” are arguing for doing so, and in some cases are explicitly arguing that accepting a risk of death is an acceptable tradeoff; and therefore (3) these people are hypocrites and never really believed their pro-life rhetoric. This syllogism fails on two levels: It promotes a common misunderstanding of how pro-lifers think about life and death, and it ignores the extent to which the reopening debate involves both grave tradeoffs and major uncertainties.

What “Pro-Life” Means
To start with, it is important to define our terms. “Pro-life” does not mean the same thing to everyone: Some people use it simply as shorthand for opposing abortion, a position that different people come to through different reasoning. For others, “pro-life” encompasses a broader set of ideas about the value of human life and the moral justifications for ending it. Still, most people who are pro-life on abortion draw to one extent or another from the same universe of Western, Judeo-Christian traditions of moral philosophy on life-and-death issues. Moreover, the majority of American pro-lifers (though by no means all) are Christians influenced by specifically Christian views about life and death.

Consider, as an example of pro-life reasoning, the Catechism of the Catholic Church. While not all Christian denominations use precisely the same arguments, Catholic teaching against abortion is notably rigorous and longstanding, drawn from a 2,000-year-old philosophical tradition on the sanctity of life, and set down in a document intended as authoritative around the world and down through the centuries. It is thus a sample of pro-life thinking that goes beyond situational responses to present-day American politics. Most American Christian traditions draw from similarly deep waters.

The Catechism emphasizes that the Fifth Commandment (“Thou Shalt Not Kill”) “forbids direct and intentional killing as gravely sinful.” Yet, it draws a distinction in three different areas that illustrate what it means by “direct,” “intentional,” and “killing”:

(Emphasis, in all cases, in original.)

Taken together, this is a philosophy that treats every human life as sacred and imposes a stern burden of justification for the taking of life. But it also draws lines to allow for real-world distinctions. Deliberately taking a life is different from accepting the “inability to impede” death, which is the natural end of all life. It is different from actions that are expected to lead to deaths as a matter of probability. It matters if actions that aren’t intended to cause death are justified, but justification demands “proportionate reasons.”

To the pro-lifer, looking at a particular person and taking their life away — actively, or by refusing life-or-death assistance — is a deliberate choice that is different in a morally meaningful way from simply adopting this or that public policy that is statistically projected to increase risks of death. This distinction has a long pedigree in Western philosophy and Christian theology. It tends to get hand-waved away by progressives who reject both, but rejecting other people’s premises does not make them hypocritical.

The Things We Know and the Things We Choose
There are real-world reasons for drawing a distinction between direct, intentional acts and the probability of undesired consequences. Simply put, there are limits to what we know. Estimated projections about the death toll from various policy choices are just that: estimates, which may be disputed and may be wrong. Just because you put a number on something does not make it so.

A little over two weeks ago, when Georgia governor Brian Kemp decided to begin reopening parts of the state’s economy, Amanda Mull of The Atlantic branded it, in a screaming headline, “Georgia’s Experiment in Human Sacrifice: The state is about to find out how many people need to lose their lives to shore up the economy.” It was not an unusual media characterization of Kemp’s decision. Kemp’s choices may not have been the right ones, and statistics remain a moving target, but thus far, the sky has not fallen. Yesterday, the number of hospitalized patients reported by the state fell to 1,125, the lowest since Georgia began keeping those statistics on April 8. The seven-day moving average reported by the Georgia Department of Public Health dropped from 709 cases on April 27 to 242 cases at this writing on May 13; the seven-day moving average of deaths fell over the same period from 34 to 12. 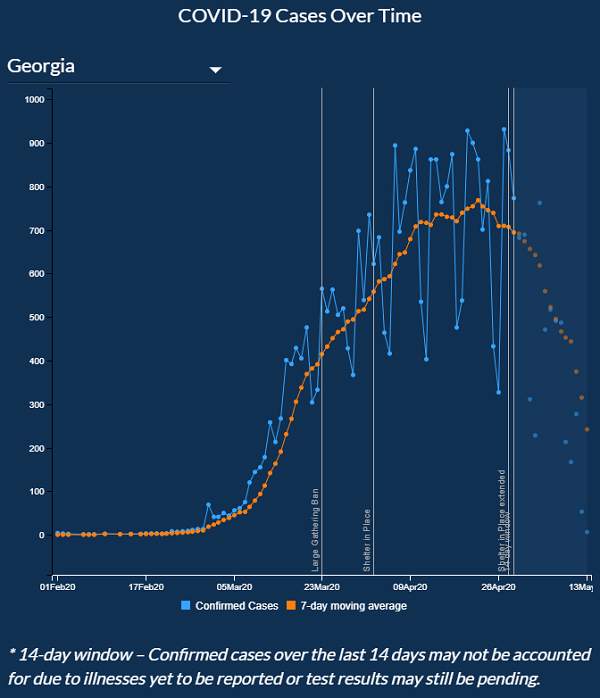 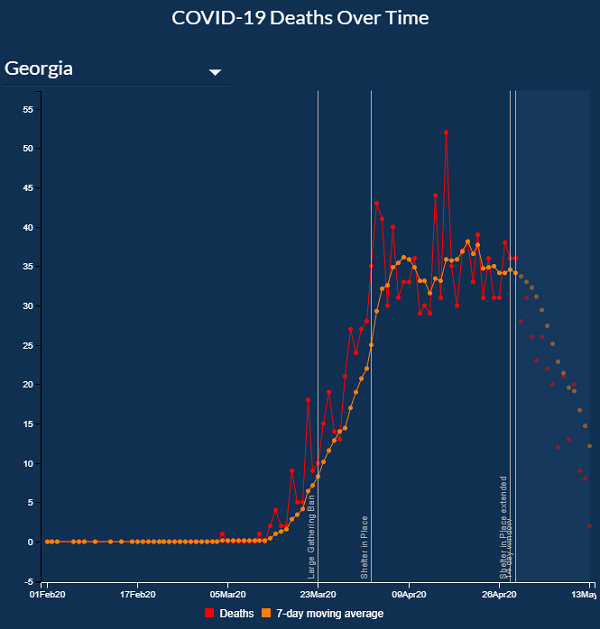 The actual results are probably less optimistic than that, given the lags that exist in reporting data on a daily basis, but a spike in deaths large enough to amount to “human sacrifice” would be pretty hard to hide in that data. The lesson for all of us should be a little more humility in making sweeping claims about what we know will happen. Our philosophical framework for distinguishing between direct killing and probability is not just some sort of moral smokescreen; it reflects our long human experience with uncertainty. Abortion or euthanasia, by contrast, involves no uncertainty: The end of life is the point.

On the question of what constitutes “proportionate reasons” for reopening businesses, churches, and other core institutions of the economy and civil society, there are also serious tradeoffs to weigh on the other side — tradeoffs that are themselves subject to all the same uncertainties. We know that prolonging lockdowns is likely to lead to damage to the economy, which in turn means more poverty, more unemployment and dependence that saps human dignity, and fewer social resources to alleviate suffering. We know that prolonging lockdowns is likely to exacerbate other problems: deaths from suicide and addiction, domestic abuse, missed diagnoses of other life-threatening diseases. We know these things, but we can only estimate their size to compare them with other estimates of lives lost.

Proportionality, when applied to big questions of social policy and probability, includes not only life but living. Humans were put on this earth not only to exist, but to make something of the time we are given. We know that staying away from church risks our immortal souls. We know that we will all die someday, and that we are likelier to die the older we get. Yet, as a society, we do not adopt and never have adopted the view that fear of death should be the only thing we value. Even the Catechism’s litany on end-of-life medical choices sees limits to “medical procedures that are burdensome, dangerous, extraordinary, or disproportionate to the expected outcome.”

Weighing economic and social factors in reopening decisions is something everyone does anyway, whether or not they are willing to admit it. Why hasn’t the New York City subway shut down completely, given its outsized role as a vector for disease? Mainly because some people need it to get to work to make a living. Guess what? Lots of people need to get to work to make a living, even people who do not take subways. That does not mean we impose no restrictions on anyone; it does mean that everybody’s analysis of the question already includes those kinds of considerations.

Indeed, it is only in our modern age — since the discovery of penicillin in 1928 — that it is even possible to consider living without constant fear of infectious disease. Societies before us took steps, sometimes harsh ones, to fight disease, but they never just stopped living for fear of dying. Pro-life has a real meaning when it comes to the prohibition on deliberate taking of lives, but it has never meant that we cannot also be pro-living when it comes to accepting a certain level of risk, and trusting in the Lord or to chance. The idea that weighing life against living is forbidden to pro-lifers is simply a failure to understand that crucial distinction.

The same is true of evaluations of the relative risk to older and younger people. Being pro-life means you reject the view that Grandma should be unplugged because she’s old. But it does not mean that you close your eyes to the stubborn reality that we all die, and we all run more risk of death as we age. We can accept some additional risk to older people, in going about our daily business, because we already all live with more risk as we get older.

Public officials need to consider risks to life and health in deciding what to reopen, when, and how. Pro-life public officials should take very seriously the risk that the wrong choices will lead to more deaths, and they should weigh that more heavily than any other factor. But pro-lifers are in no way required to shut their eyes to all other forms of human life and need, or to shut the country just to prove a point.

The ‘Keep Nine’ Amendment Can Save the Supreme Court

A practical plan to amend the Constitution to keep the Supreme Court at nine justices.
Dan McLaughlin

The bill would do away with the 45-year-old Hyde amendment.
Brittany Bernstein

Only two people have died of COVID-19 in the past two weeks in Washington.
Zachary Evans

Jim Geraghty
The CDC has turned on a dime. Why?
View More
Loading...