The virus’s devastating toll on long-term-care facilities in New York and New Jersey is the result, more than anything else, of bad governance.

In the New York Times on Sunday, Fordham theology professor Charles Camosy wrote that America’s long-standing disregard for the elderly and infirm “made the nursing-home crisis” touched off by COVID-19 “a tragic inevitability.”

Camosy says that the elderly and disabled are “marginalized” in American life. Perhaps this is so. Most of us broadly affirm the inherent worth of those two populations, but it is difficult to dispute that our day-to-day decisions as individuals and as a nation do not always reflect our stated priorities vis-à-vis their well-being. It merits mention, though, that we effectively shut our economy down in hopes of preventing the spread of a virus that poses limited threat to the young for the sake of the aged and sick. Further, Camosy’s claim that the current nursing-home crisis was the inevitable result of our reliance on such facilities ignores the fact that Italy’s elderly, who by and large live with their families, were ravaged by COVID-19, too. Most pressing, it lets America’s state and local policymakers off the hook for their mishandling of the coronavirus pandemic, which has not impacted each state’s long-term-care facilities equally.

Given that the virus is disproportionately lethal to those aged 80 and over, whether they live in a nursing home or elsewhere, some states have done a much better job limiting the damage it causes their long-term-care (LTC) facilities than others. Here are the population-adjusted data from the 34 states reporting COVID-19 mortality statistics for nursing homes and LTC facilities: 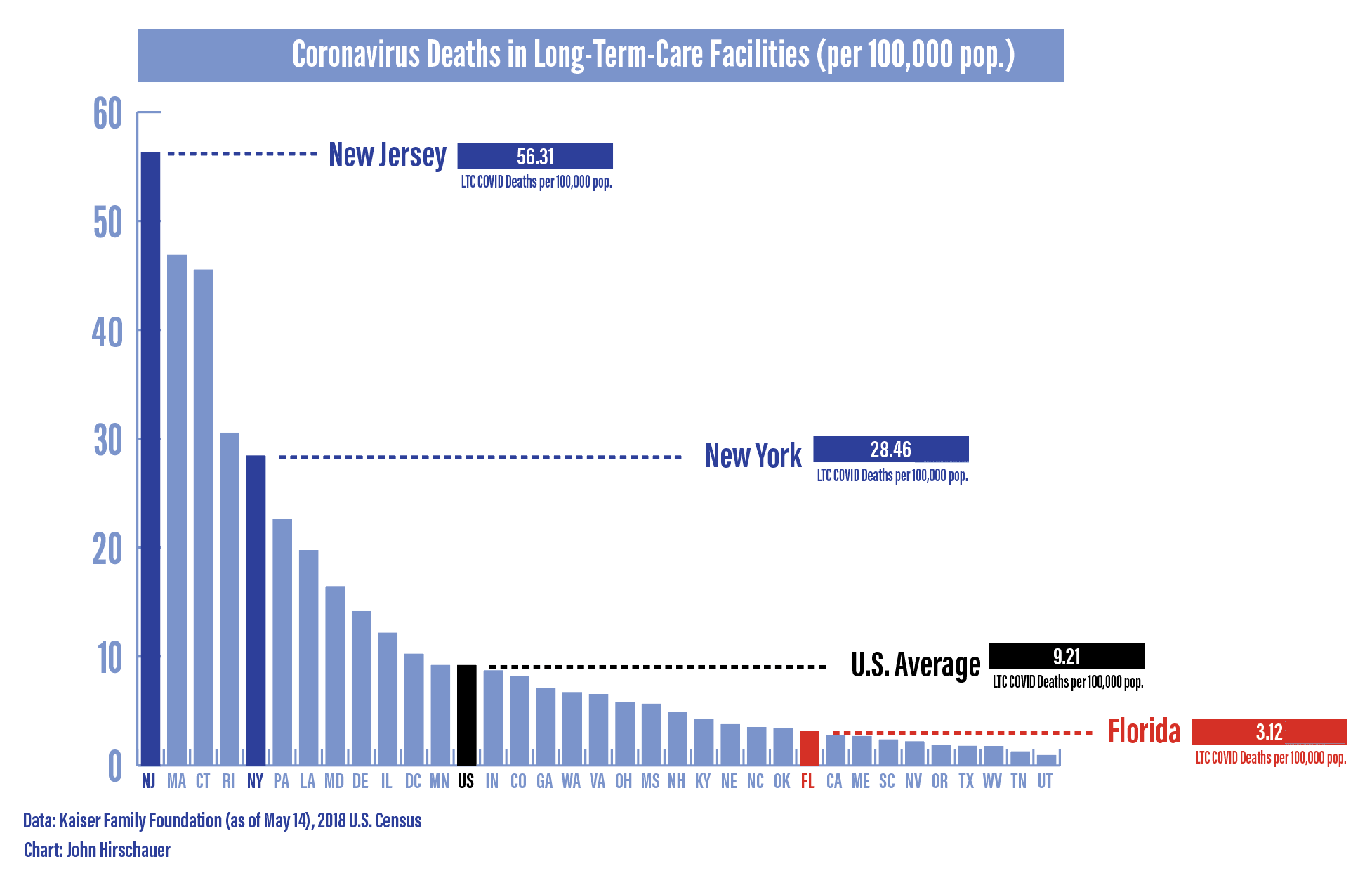 First, let’s consider New Jersey, whose LTC-mortality figure dwarfs the national average. More than half of the over 9,000 COVID-19 deaths in the state have been residents and staff from nursing homes and other LTC facilities. The state’s attorney general opened an investigation into those facilities, which have the nation’s highest per capita coronavirus-death rate and have long suffered from a lack of oversight. In a chilling display of the state’s troubles, police found 17 bodies in a shed outside an Andover nursing home in April after employees apparently absconded from the premises once the virus took hold. Other facilities were recently found severely understaffed and failing to adhere to basic care standards.

Executive mismanagement exacerbated these preexisting deficiencies. Governor Phil Murphy recently told NJ.com’s Paul Mulshine that the state’s long-term-care facilities were required to screen patients and staff by May 26th — far too late a deadline, considering that we have known for months that this virus disproportionately preys on the elderly and infirm. In March, Murphy required all New Jersey nursing homes to accept patients who tested positive for the virus. The presumptive argument for instituting this policy — that it would allow the state to avoid overwhelming hospitals — was itself incoherent. As Dr. Michael Wasserman of the California Association of Long Term Care Medicine told NPR in April, “If you push folks out of the hospitals to make space and you push them into nursing homes, a couple weeks later, for every one of those you send to the nursing home, you may get 20 back in the hospital.”

In New York, a similar series of executive missteps led to a higher-than-average coronavirus-mortality rate in nursing homes and LTC facilities. Governor Andrew Cuomo told reporters that the virus spread like “fire through dry grass” in the state’s nursing homes, which is an apt analogy. Nevertheless, Cuomo instituted guidance on March 25 that stipulated “no resident shall be denied re-admission or admission to a nursing home solely based on a confirmed or suspected diagnosis of COVID-19.” Operating on the same premise as New Jersey, Cuomo ironically further imperiled his state’s hospital capacity by putting the “fire” of COVID-19 patients in the “dry grass” of nursing homes. While he changed the policy earlier this month, the damage was done: New York has the fourth-highest COVID-19 mortality rate per capita in LTC facilities as of May 13, and the staff and residents of veterans’ homes were similarly devastated by a lack of personal protective equipment.

Florida’s LTC facilities have had a different coronavirus experience. While the state’s response to the pandemic has been much maligned in the media — photos of “Florida Morons” flocking to beaches are the frequent object of contempt, and its reopening plan was subject to the standard canticle of “expert” denunciations — a concerted effort to allocate scarce resources to nursing homes and assisted-living facilities allowed it to avoid devastating those facilities.

While the AARP and other groups have criticized Florida governor Ron DeSantis for failing to implement a universal testing regime in nursing homes, he has persisted in administering random tests in the state’s 4,400 LTC facilities on a voluntary basis, deploying a group of National Guard personnel when a facility has a positive case. As of last Wednesday, National Guard medics had completed over 30,000 tests. DeSantis has also instituted a mobile testing lab that travels from facility to facility, capable of administering up to 3,500 tests a day. The state’s testing regime has not been perfect — it took the DeSantis administration, like other state governments, a few months to expand testing capacity — but the governor prevented disaster by prohibiting nursing homes from readmitting COVID-19 patients before they tested negative for the virus, and marshalling resources toward the creation of COVID-specific units for those unable to return to their original facilities.

Florida is certainly not exempt from future outbreaks — missteps by a government official or facility staff member could retard the state’s apparent progress, and it’s possible that, as testing continues to expand, the numbers will change and the mortality figures will reveal DeSantis’s approach to be suboptimal. But as of now, the data show that DeSantis has handled this pandemic better than governors in the northeast, and to say that the nursing-home crises those states face were an inevitability discounts the very real decisions that produced them.