Battleground states have decided many presidents’ reelection campaigns, for good and ill.

NRPLUS MEMBER ARTICLE E lsewhere today I explore the overall trends in reelection campaigns of incumbent presidents. Here are charts summarizing the battleground states for each such election, beginning with 1832, the first year for which adequate popular-vote totals are available. States in purple were flipped to the incumbent, those in light green were flipped by the challenger away from the incumbent. 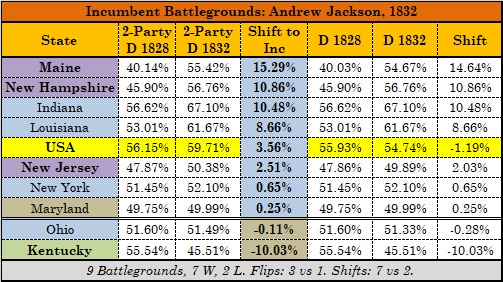 Jackson lost major ground in Kentucky, the home state of his opponent, Henry Clay, but gained overall due to significant improvements in New England as his opponents were no longer running an Adams, while Jackson replaced John C. Calhoun with New …

Having a common songbook unites congregations and strengthens the church.
Dominic Pino

Stop the Progressive Left’s Assault on the Rule of Law

No rational political mind should have any trouble rejecting an agenda that would sacrifice public safety to advance progressive political objectives.
George J. Terwilliger III

The Louisiana politician is unworthy of the admiration he gets from the left — and, increasingly, from the right.
Ellen Carmichael

Andrew C. McCarthy
The Capitol-riot probe offers only the latest instance — civil discourse is dying because we’ve given up seeking objective truth.

John Podhoretz
The next mayor will have to contend with a legacy of wreckage.

Aron Ravin
Debauchery and disrespect run rampant at the Olympics, and we should not tolerate it.
View More
Loading...