The evidence is mixed, but suggests the answer could be yes.

The dramatic increase of COVID-19 cases in the states of Texas, Florida, Arizona, and California this summer has many scratching their heads. The summer months were supposed to slow infections due to activities taking place outdoors and more in-home ventilation, such as windows being opened up. This hypothesis has thus far proved true in many northern states — most dramatically New York — while the South has fared much worse.

There are a few possible explanations for the South’s infection spike.

The first is that a widespread lack of mask-wearing is causing these increases. The national media have been quick to note that Republican governors such as Greg Abbott and Ron DeSantis were reluctant to impose a mask mandate.

The second, that these states opened up too soon and busy restaurants, beaches, and bars — and a fair bit of demonstrating — resulted in close contact. High infection rates among young people seem to confirm the consequences of increased public socialization.

The third possible reason, and the one we will be examining in this article, is how summer temperatures forces southerners into their homes where the HVAC (Heat, Ventilation, and Air-Conditioning) system could be recycling the airborne virus throughout homes, grocery stores, and office buildings. At an online event hosted by the Massachusetts Consortium on Pathogen Readiness, Harvard Medical School professor Edward Nardell noted that states using high levels of air conditioning in June due to “high temperatures” have experienced “greater increases in spread of COVID-19, suggesting more time indoors as temperatures rise.” This mimics the increase in illness that occurs in the winter when we spend “more time indoors.”

A recent Chinese study found that infected diners (Group A) sitting in front of a blowing window air conditioning unit transmitted COVID-19 to others (Groups B and C) seated in the restaurant ‘downwind’ of them. The airborne droplets from Group A took a trip on the prevailing winds towards B and C. Improper ventilation contributed: This restaurant was windowless, with little to no negative ventilation, which pulls air away (positive pushes it toward you). This means the same stale air was being circulated throughout a small space.

Instead of pulling in hot and humid air from outside, the typical air conditioner reuses much of the pre-cooled air that has already passed through a building. This saves the building owner a great deal of money, but can also circulate existing airborne particles continuously throughout the space. Nardell pointed out that “as people go indoors in hot weather and the re-breathed air fraction goes up, the risk of infection is quite dramatic.”

Hospitals deal with this regurgitation of air by using UV lights, high-quality HEPA filters, and routine cleaning to ensure their HVAC system is not spreading contagions. (Potential good news: A recent study at Columbia University Irving Medical Center found Far-UVC lights, safe for humans, have great efficacy in killing some forms of coronavirus; further testing on SARS-CoV-2 is ongoing). But the average home or business is extremely unlikely to have such technology, and the risk of contagious particles being recycled through the home increases as a result.

Open windows and doors allow building air to be renewed multiple times an hour, naturally ventilating the home. For those in the upper Midwest, Pacific Northwest, and New England, there are few more enjoyable things than letting the soft breeze of a summer morning waft through the home. Not so in the South, where daily temperatures reach high into the nineties routinely. “While I can stand the heat, recently it’s been hitting the high nineties and even the hundreds, keeping me from going outside,” a Texas native tells National Review. Air conditioning is not so much a quality-of-life improvement as it is a necessity for the health and safety of the family, preventing heat exhaustion and the major inconveniences of extreme temperatures. “I’m spending as much time as I can inside in the A/C,” the Texan said. “Even nights and mornings are very hot in late summer.”

To further explore the possible relationship between air conditioning use and an increased rate of infection, we turned to the available data. First, we had to establish at what temperature most residents of Texas turn on their air-conditioning units. Taking a small poll of Texans in Houston, Dallas, and Lubbock, we found that the average thermostat is set to 75 degrees Fahrenheit. Matching that information to our data, we noticed the R0 — the viral reproduction rate — of infection tends to increase when the average outside temperature exceeds the average temperature of many Texans’ thermostats, likely meaning their houses are closed up and the air conditioning is running. 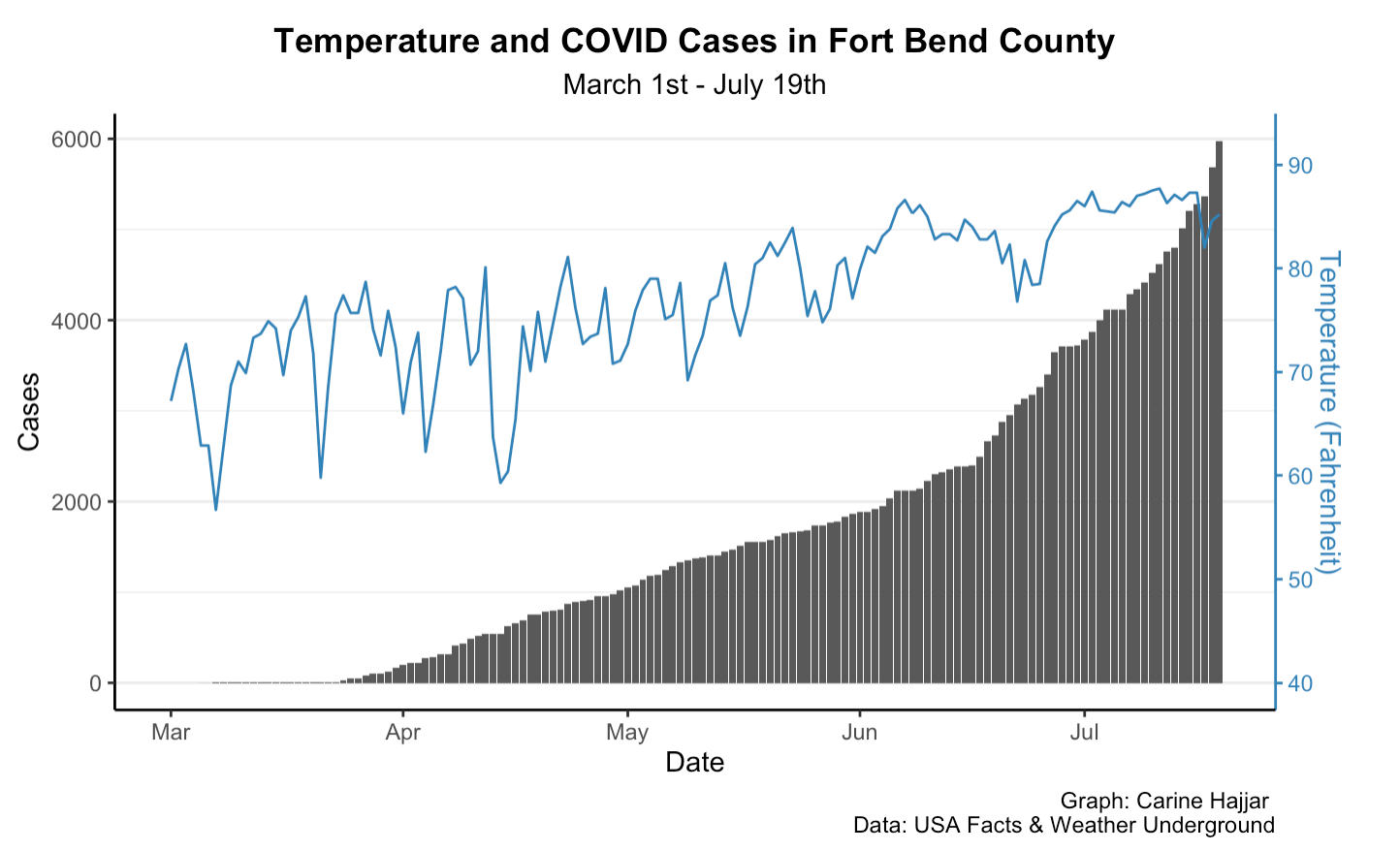 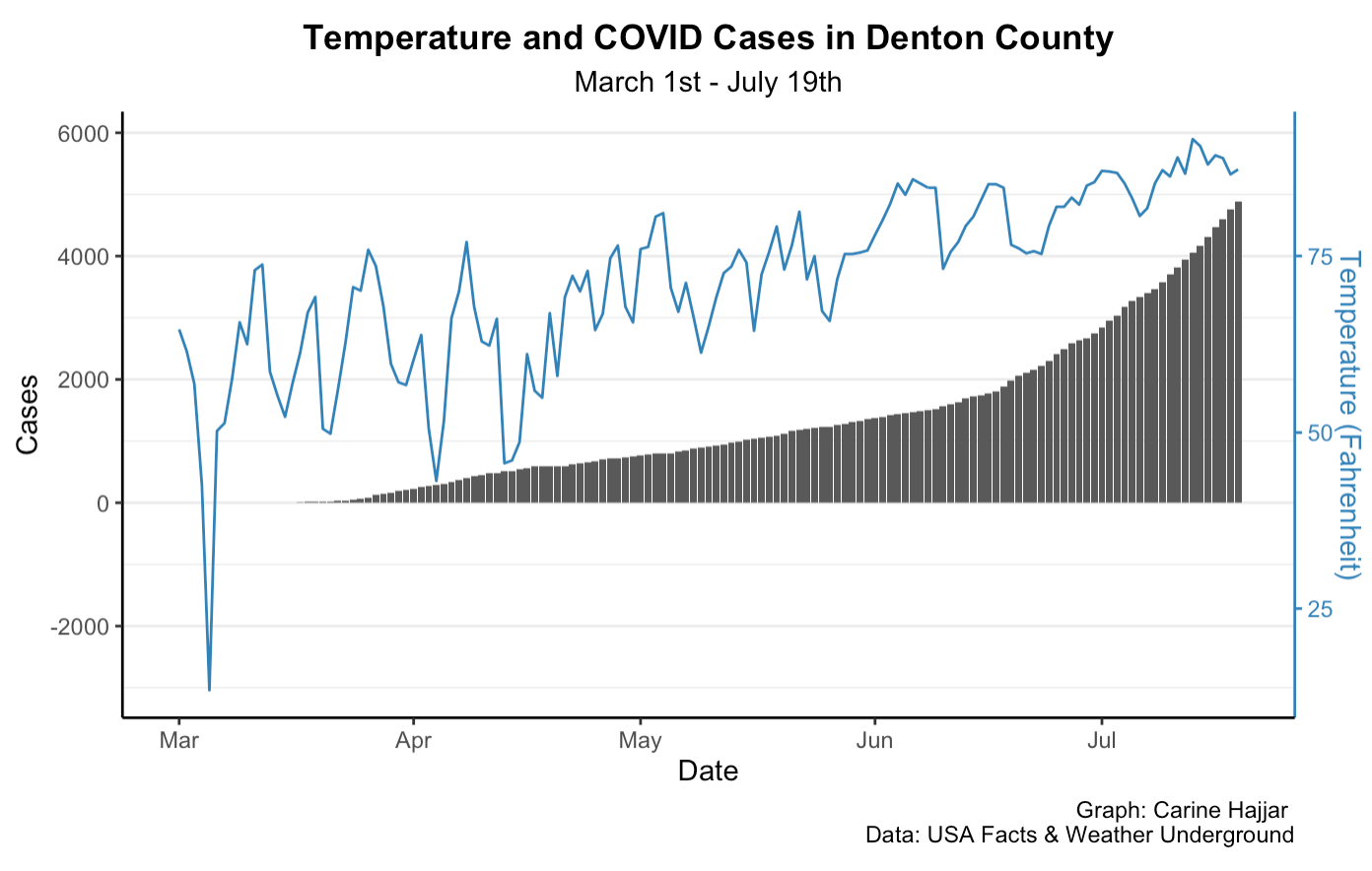 But, of course, correlation isn’t causation. To further test our postulation, we compared Denton to Fort Bend, both Texas counties with similar household incomes (figuring this would increase the likelihood of alike housing, central cooling, and energy consumption) and population. The difference here is that Denton is relatively cooler and less humid than Fort Bend during the summer months, which would make outdoor activities and open windows more bearable throughout the late spring and early summer. Though Denton exceeded Fort Bend’s cases for a short while in late March, Fort Bend soon trended towards consistently higher cases per capita. We wonder whether the extreme temperature dips in early and mid-March may have prompted furnaces to turn on, causing the early infection jump in Denton County. 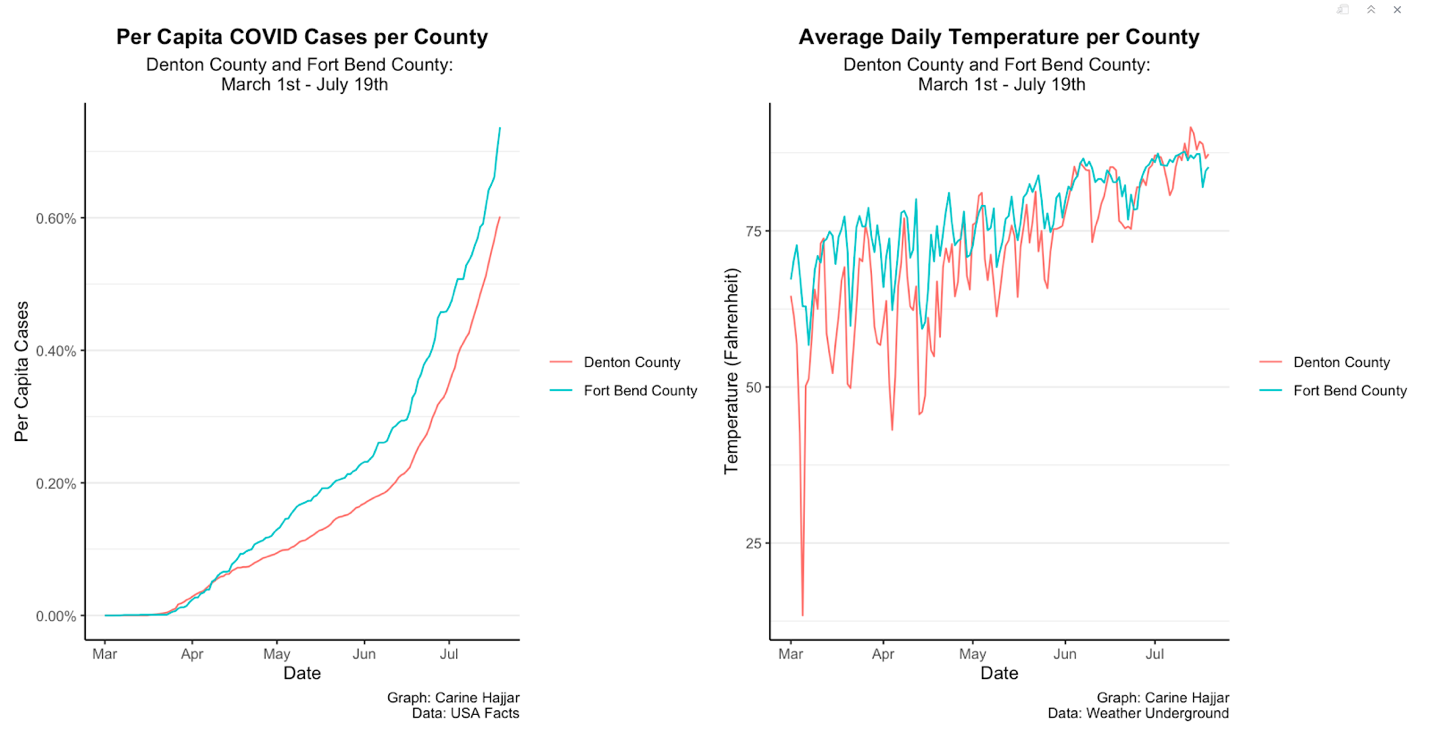 Until July 19, Denton had actually seen a higher average temperature (86.7 degrees Fahrenheit) than Fort Bend (86.2 degrees Fahrenheit), complicating the usefulness of our comparison. However, the overall discrepancies between the counties are slight. This convergence perhaps explains the tightening of the curves for per capita cases in July. Fort Bend may maintain a higher caseload due to its higher humidity on top of the heat, another driving factor in the use of A/C. Either way, both counties clearly have cases that positively correlate with rising temperatures.

Tarrant County, where Fort Worth is, shows trends corresponding to our postulation: As the temperature has risen, so have cases, suggesting that a retreat indoors to close-quarters is correlated with viral transmission. 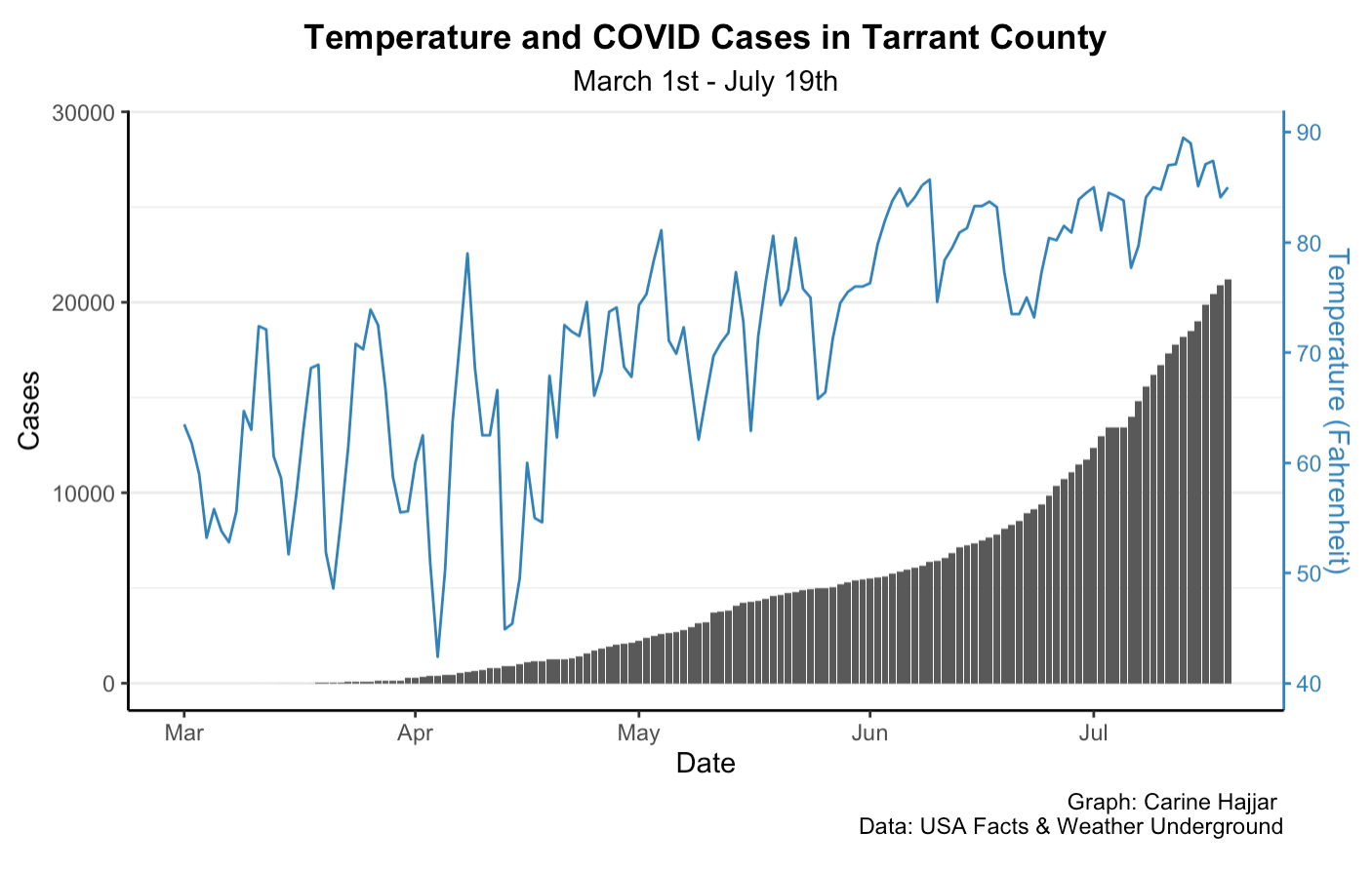 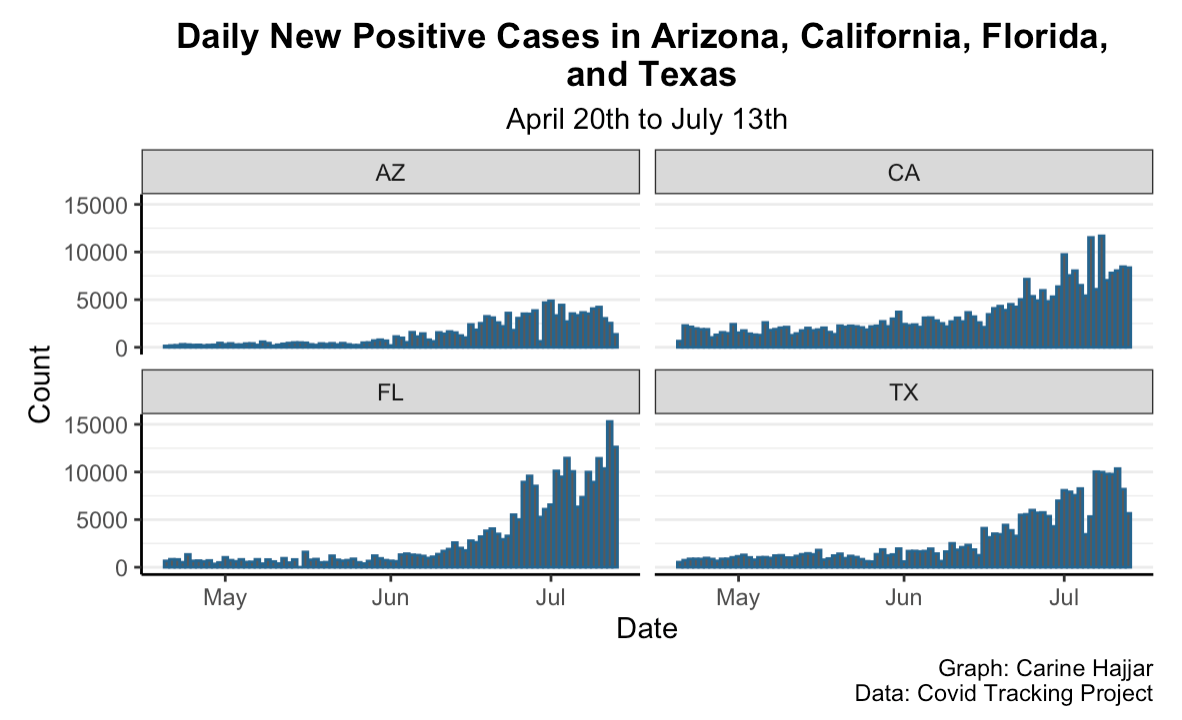 Much like Texas and Florida, California, a state of many climes and so often forgotten by ideological news anchors making cheap points about inept conservative governors, is seeing spikes primarily in its warmer regions.

Yet a rise in average temperature — and its effect on personal cooling habits — is not a monocausal explanation for any of these states’ viral surges. Timing is a factor as well; the virus reached these places later than the North, its spread delayed into the summer months. While this means later peaks, it also means infections converging with hostile temperatures and rising rates of A/C use. And when you combine the reopening of private establishments, lack of mask-wearing, and mass migration to air conditioning, there is certainly ample opportunity for the spread of COVID-19.