Reopening is not going as well as hoped.

We’re living in Groundhog Day. For the second time this year, COVID-19 is sweeping the country and we don’t have any great options for dealing with it. We didn’t squander the past four months, exactly, but we demonstrably failed to get to a place where we can enjoy an open society without the virus taking off again. Thus we’re back to the same old cost–benefit analysis: How much economic, educational, and mental-health havoc are we willing to wreak, and for how long, to control this godforsaken thing?

These are the data everyone’s been talking about these past couple weeks, the number of new cases confirmed in the U.S. by day: 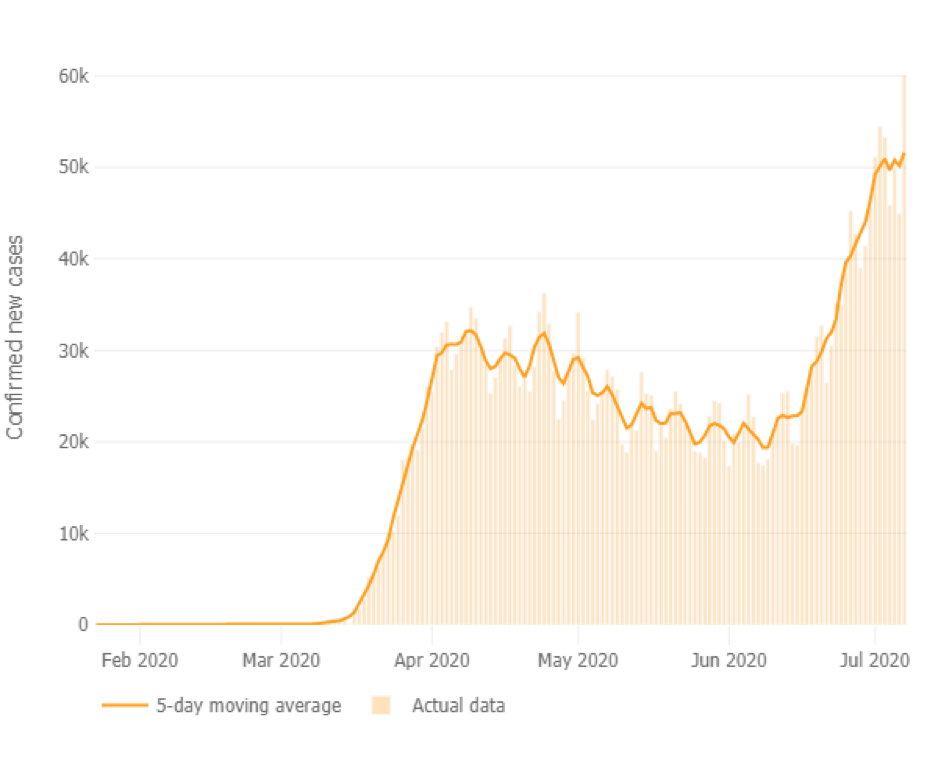 Some of the rise in cases is caused simply by increased testing. But the tests’ positivity rate has risen, too. When you do more tests and a higher percentage of them come back positive, you’ve got a growing problem. And slowly, the problem works its way through the stages of disease progression.

Hospitalizations have been rising for a couple weeks, and some Florida hospitals are running out of intensive-care beds. Fortunately, we have not seen a nationwide rise in deaths . . . yet. But it takes maybe three to five weeks for a new infection to result in death, and then some time for the death to be recorded — and the rise in cases began in mid June, implying that the death trend is about due to turn around. A few of the states hit by this second wave, including Florida and Texas, are already seeing signs of it, and the last couple of days’ national death totals have been elevated.

It’s possible we will see far fewer deaths than one might fear, because treatments have improved, and this wave seems to be hitting the elderly less than the first one did. I hope that’s what happens. But I’m extremely doubtful that you can have this many new infections without a big increase in deaths, and I’m also skeptical you can have a major outbreak among the young and carefree that doesn’t leak into the elderly population eventually.

Back in March, we could hope that a brief lockdown would buy us time while we figured out better ways to contain the virus. And to some extent that was true: We have made progress on treatment, we have gotten people to wear masks and stay six feet apart, and we are testing a lot more people than we were back then. But we obviously haven’t hit on a good combination of policies and behavioral rules that allow us to get back to anything resembling normal without paying the price. All the big suggestions from months ago — mass testing, rigorous contact tracing, isolating the sick, masks, etc. — either have not been executed competently or have not worked.

Equally frustratingly, a lot of the scientific debate around the virus remains unresolved. We don’t know what the disease’s fatality rate is, how many people are immune, how long immunity lasts, or how many more people would need to be infected to achieve “herd immunity” — and thus we don’t have a good grasp of what the worst-case scenario looks like if we just go back to our old lives and let the virus rip. If we don’t know that, we also don’t know how many lives we save by torturing ourselves with continued restrictions, whether self-imposed or government-mandated.

How are you supposed to make a decision when you don’t know the key facts? We seem destined to just muddle through, going crazier by the minute.

Meanwhile, the economy might not fully recover for a decade, even if we don’t have to shut it down again to cope with this second wave and/or a resurgence in the fall. And there’s only so much lockdown that people, very much including yours truly, are willing to tolerate.

Perhaps the biggest silver lining is that things aren’t bad everywhere. Trends in New York look downright rosy, for example, which is to say that the very hardest-hit state has managed to slowly reopen while keeping a lid on the virus. The overwhelming majority of the country locked down last time around, but now we can probably handle the problem place by place — with a big focus on areas where hospital capacity is under threat, and on vulnerable facilities such as nursing homes. Texas has re-closed its bars, while restaurants up here in Northern Virginia are just starting to seat people indoors again: Federalism at work.

The most contentious issue right now is what to do about school in the fall. As Jim Geraghty and Michael Strain have noted, the cost of keeping schools shut down is insanely high, especially given the low risk that kids themselves face from the virus. Learning slows down, child abuse goes undetected, parents have trouble working when the kids are home. Yet thanks in part to the power of public-sector unions, many places are facing a ridiculous situation in which restaurants are open already, but teachers are lobbying to keep schools shut down into the fall. (Lots of parents are livid, too: My eldest is supposed to start kindergarten later this year, and I’d be willing to move to another state to make that happen if necessary, though my wife probably won’t stand for it.) If some parents and some teachers want to opt into online learning, fine, and we can certainly debate the social-distancing and testing procedures schools should follow, but it’s unconscionable to keep schools closed entirely.