The Next Inflation Wild Card for the Fed: Housing

The Climate Warriors Are Coming for Your Gas Heater and Stove

Welcome to the Capital Note, a newsletter (coming soon) about finance and economics. On the menu today: The Robinhood Renaissance, Bank Dividends, Henry VIII, and some links from around the Web.

Baseball may be back (albeit with creepy fake crowd noise), but it’s been supplanted as America’s favorite pastime by day-trading. With the coronavirus locking Americans indoors, trading activity by individual investors has doubled this year. Robinhood, retail investors’ favorite brokerage platform, added 3 million new accounts in the first quarter.

The rise in retail activity has coincided with wild, often inexplicable swings in stocks. After Hertz filed for bankruptcy, its shares briefly quintupled, only to fall back down to earth in the following week. This week, the camera company Eastman Kodak is up more than 1,500 percent after winning a government contract to produce ingredients for coronavirus treatments. Nearly 80,000 Robinhood investors piled into the stock.

We missed out, huh? In case your FOMO isn’t bad enough yet, here’s an excerpt from Wall Street Journal story:

The potential for big gains—increases of mere pennies per share in some cases—outweighs the risks, she said. Starting with $25,000, Ms. Viswasam said she had played price swings on penny stocks to a $65,000 profit through early July all on her phone.

“I feel like Sonic the Hedgehog, collecting my coins,” said Viswasam.

But in the long run, the big winners of the retail boom may be asset managers. A 2017 Credit Suisse note found that individual stock ownership is positively correlated with excess returns for institutional investors. In recent years, financial commentators have sounded the death knell for active management, as low volatility and computerized trading leaves less money on the table for fund managers. But if the day-trading boom persists, that trend may swing. With more “dumb money” around, professional money managers have more opportunities to outwit markets. 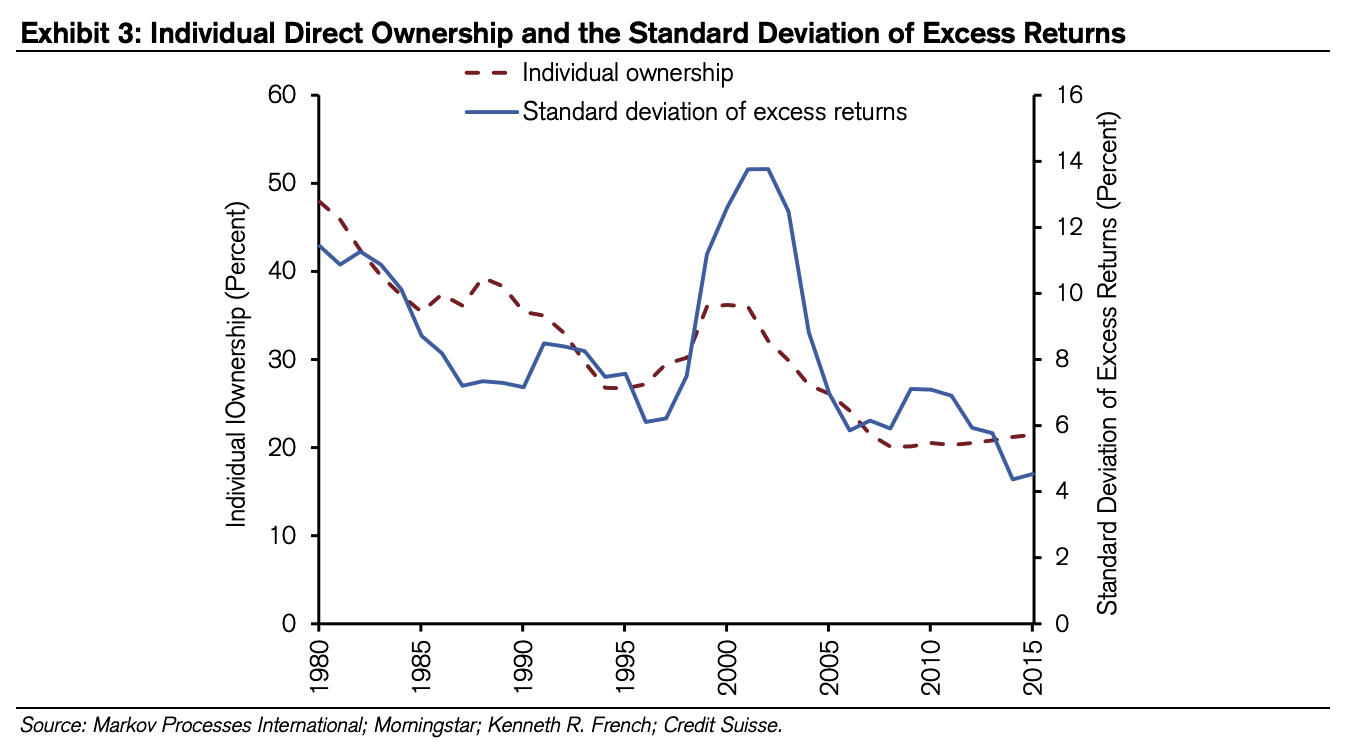 One such winner is Boaz Weinstein, whose hedge fund has gained 90 percent this year:

The only complication here is that retail investors seem to be beating the professionals at their own game. Goldman Sachs found that “a portfolio of stocks popular among retail investors has surged by 61 percent since the bear market trough compared with a gain of 45 percent for both hedge fund and mutual fund favorites and a 36 percent rise in the S&P 500.”

Over time, we should expect the returns of day traders to revert to the mean, but for now, they’re riding the rally.

What Did They Mean by That?

The French statesman Charles Maurice de Talleyrand-Périgord, or to the casual, Talleyrand, was one of the most talented and more elastic political figures of the late 18th and early 19th century. A bishop who turned to anticlericalism during the French Revolution and then managed to work not only for Napoleon, but the monarchs who succeeded him. When he died, Austria’s Prince Metternich reacted by asking, “What did he mean by that?”

And that brings us, believe it or not, to the European Central Bank (ECB). Earlier this week, the ECB gave out the word that banks under its supervisory control were to hold off on returning capital to shareholders.

The European Central Bank extended a de facto ban on banks returning capital to shareholders and urged them to show restraint on bonuses after the coronavirus outbreak, dealing a blow to lenders who lobbied for business as usual.

The supervisor asked that banks not pay dividends or buy back shares at least until January, three months longer than initially indicated, and “to be extremely moderate with regard to variable remuneration,” according to a statement Tuesday. The ECB said it will review its stance again in the fourth quarter…

The ECB said it will take into account the economic environment, stability of the financial system and banks’ ability to plan their future capital levels when it reviews its stance again. Banks may resume dividends once the uncertainty subsides, even with levels of financial strength that are below the ECB’s overall demands, as long as the lenders can show “that their capital positions are sustainable in the medium term,” the watchdog said.

The Bank of England has adopted a similar stance.

In part this is a matter of simple prudence. We simply don’t know where the pandemic, and the methods being used to deal with it, are taking the economy.

Thus, to take some news just from this morning, the British Lloyds Banking Group announced some grim results today.

Lloyds Banking Group is preparing for a surge in customer defaults, after Britain’s largest retail bank warned that the coronavirus crisis had inflicted more damage on the economy than it had expected.

The bank’s shares tumbled more than 7 per cent on Thursday to their lowest level in eight years after the lender set aside another £2.4bn to cover future bad loans and slumped to a second-quarter loss.

And this is by no means just a British issue. As the FT noted in the same report, Spain’s Santander reported a €11.1bn loss in the same quarter. Perhaps it’s unfair to mention that banks in non-lockdown Sweden appear to be faring somewhat better.

But, addition to general concerns over the coronavirus economy, I cannot help wondering whether, somewhere in the back of its mind, the ECB is wondering whether — whatever was agreed at the EU’s recent Brussels summit — that another euro zone crisis might be in the offing. If it is, the banks will be right in the middle of it.

The Daily Telegraph’s Ambrose Evans-Pritchard is not known for the calm of his reporting, but this, nevertheless, caught my eye:

Celebrations over the EU’s €750bn Recovery Fund have been rudely interrupted. Italy is already warning that the money will not come soon enough to avert an autumn liquidity squeeze.

Roberto Gualtieri, Italy’s technocrat finance minister, told leaders of the ruling coalition behind closed doors that the treasury will struggle to cover both a budget deficit near 12 percent of GDP and to redeem a mountain of old debts coming due over coming months.

We’re in for an interesting autumn, I think.

For clues about how glutted the global diesel market remains, just look at the bizarre voyages being undertaken by tankers hauling the fuel…. One cargo of diesel got hauled all the way to Singapore from the Persian Gulf — only to be loaded onto a much bigger ship and taken back to the Middle East. Another tanker hauling the fuel to Europe from India abruptly changed course over the weekend and is now heading south toward the Cape of Good Hope and signaling West Africa.

Earlier this week, we noted that former presidential candidate Andrew Yang had commented on the way that the pandemic had sped up the shift to automation. This from McKinsey, looking at e-commerce, makes a similar point. If we had to guess, the lockdowns will represent less of a (permanent) break in the way we do business (the office will be back), but it will accelerate changes that are already underway, but take a look at what McKinsey has to say.

In the Financial Times, Robin Harding explains how the “natural” rate of interest affects monetary policy (a favorite hobbyhorse of our Ramesh Ponnuru):

[O]ver any reasonable period of time, central banks cannot fix interest rates and still keep control over prices. Far more than is commonly appreciated, central banks are servants of underlying trends in the economy, not their masters. To blame monetary policy for rising house prices or growth in debt is to assume, mistakenly, that central banks had any alternative.

Robots as caregivers for the old.

In yesterday’s Capital Note we had an item on the solidus, the coin that the Emperor Constantine used to restore stability to the empire’s monetary system. Some of the gold used in its production had been confiscated from pagan temples. Fast forward over a millennium and we see England’s Henry VIII “dissolving” the country’s monasteries and other religious houses, taking much of their wealth as he did so.

While helping boost England’s longer-term economic growth was certainly not among Henry’s motives for doing what he did, that may well have been the consequence. This 2015 paper from the National Bureau of Economic Research makes interesting reading:

We show that parishes impacted by the Dissolution subsequently had a greater share of the population working outside of agriculture, experienced higher innovation and yields in agriculture, a ‘rise of the Gentry’, and eventually higher levels of industrialization. Our results are consistent with explanations of the Agricultural and Industrial Revolutions which emphasize the commercialization of society as a key pre-condition for taking advantage of technological change and new economic opportunities.

Taken together, our findings link the spread of the market, brought about by the Dissolution, to economic and social change. These changes have been hypothesized to be crucial preconditions for the Agricultural Revolution and ultimately industrialization, but have not been tested before. Our results suggest that the end of monastic restrictions on the marketability of 1/3 of the land in England and relative incidence of customary tenure, itself directly linked to feudalism, were important for fundamental changes within England. The lagged abolition of feudal land tenure in France and Germany may be behind why England pulled ahead on the world stage in the eighteenth century.

A long read, but an interesting one.

More in The Capital Note