With confidence in government low, goldbugs are enjoying their day in the sun.

Ron Swanson is having a good year.

The smug, antisocial, meat-and-potatoes, libertarian protagonist of the NBC series Parks and Recreation prides himself on being a do-nothing saboteur in his Pawnee (a fictional town in Indiana) municipal job and also, among other things, on having stashed away untold amounts of gold bullion, buried in various locations for doomsday or perhaps just for a rainy day.

While his sophisticated counterparts in Indianapolis or (gasp) far away New York City fret over their carefully constructed portfolios of securities, mutual funds, hedge funds, and the rest, Swanson’s own investment shines, like him, in its straight, plain and idle simplicity. This year, it also shines from having outperformed most assets, with the price of gold logging a 29 percent rise since January compared with a humble 1 percent for the S&P 500 stock index and 20 percent for a Nasdaq that is driven by only a handful of names.

After a long decline in the 1980s and 1990s, gold began its rehabilitation on the eve of the new millennium. Had Swanson caught the gold bug in July 1999, when gold made a historic bottom at $252.8, he would have gained 677 percent from his investment, a performance that towers over the major stock indices.

Entire careers have been made in the stock market over that 21-year span, with billions of dollars flowing into the pockets of bankers and investment managers, and into their six-figure cars, seven-figure Hampton homes, and eight-figure private jets. 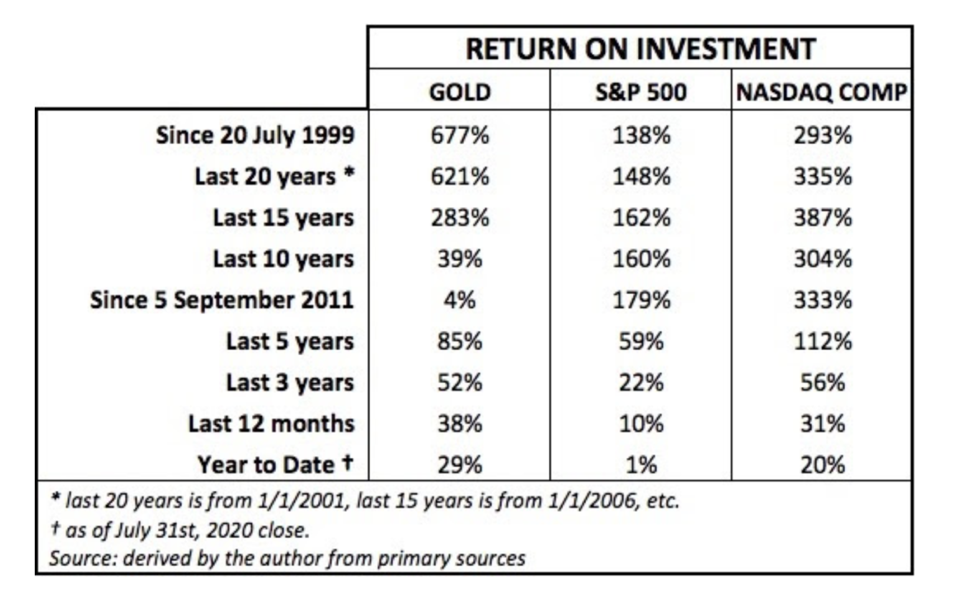 Yet none of these financiers’ portfolios has measured up to gold. The dumb barbaric yellow relic has trounced all of them over nearly every interval since 1999, as can be seen in the table above. The one exception to this public thrashing is the ten-year period since 2010 in which gold has underperformed only because it spiked in 2010-11, much as it is currently.

Tragedy but No Respect

Admittedly, this comparison is skewed by gold’s recent run. The same calculations made, say, a year ago would portray gold less favorably against other asset classes. Nonetheless, the point here is not that gold is always a superior investment but that it has proven its worth as an investable contender, notwithstanding the disdain and denials of professionals who are paid to invest in and out of other types of assets.

An often-heard criticism from the school of discounted-cash-flow valuation is that gold “has no intrinsic value” because it has no cash flows, meaning that you cannot derive an income from it. But you could say the same about a pile of dollars put away in a mattress. These stored dollars have no cash flows, but they could appreciate (or depreciate) in value for someone whose primary currency is, for example, euros or yens. This is not a productive way to make money, but that is not the point. Yes, an investment in gold is pathetically unproductive, and yes, it can generate a gain anyway.

This sad paradox leads to the next axiom: The rise of gold to new heights is tragic, and it bears testimony to failure, disaster, or crisis. It validates the Ron Swansons who dislike change even if it means progress and who stand for decades on the sidelines of human industry waiting patiently for the next accident, the next war, the next depression or other cataclysm in order to profit and celebrate, if only by proclaiming how they told us so.

A Question of Trust

Unfortunately for the rest of us, they have many reasons to celebrate now: an uncontained global pandemic, struggling economies in developed and emerging nations, soaring budget deficits, mass protests in the United States, trade and geopolitical tensions between the U.S. and China, ongoing regional conflicts with no initiatives toward diplomatic settlement. Take your pick.

Although all these factors affect the price of gold, they do so in ways that cannot be calculated with any precision. We are left with generalities: Gold will tend to rise if trust in institutions of government or confidence in the state of the world is eroding. And it will fall if they are improving. History supports this notion.

But then things turned around. In the 1980s, the Federal Reserve beat inflation and the U.S. won the Cold War, supporting a rebound in the economy and stock market. The rally continued into the 1990s, when the government fixed a real-estate bust, managed a quick victory in the first Gulf War, handled a recession, ended the war in Yugoslavia, and balanced the budget deficit. In 1999–2000, the NASDAQ bubble brought the American Century to a close with a (premature) celebration of what the next wave of technology would bring.

It was heaven for many investors, but a journey through hell for gold and its followers. On the back of these successes, gold had collapsed from a high of $850 in 1980 to a low of $253 in July 1999. As bad as that was, the scale of this loss was dwarfed by the opportunity cost incurred by a gold investor for not having invested in a stock market that rose elevenfold over the same period. $1,000 invested in gold in 1980 had turned into $300 by mid-1999 when instead it could have turned into $12,000 in the stock market.

But then, unexpectedly, things turned again. The “End of History” proved elusive. In the late 1990s, the bailout of the hedge fund Long-Term Capital Management and the repeal of parts of Glass-Steagall helped, in the view of many, pave the way for future crises. In 2000, the outcome of the presidential election was in dispute for several weeks. In 2000–02, the market crashed and former high-fliers Enron and WorldCom, among others, were revealed to be frauds. 2001 saw the horror of 9/11. That was followed by the Afghan and Iraqi Wars, the 2008 financial meltdown, bailouts, multiple rounds of Quantitative Easing, and fears of rising cronyism. Between 1999 and 2011, gold soared from below $300 to $1,900 in twelve years, massively outperforming the stock market.

The year 2011 saw the beginning of the end of the financial crisis, at least in its most acute form, and the withdrawal of the last U.S. forces from Iraq. Both of these events bolstered trust in the effectiveness of the Federal Reserve and eased concerns that Iraq was a quagmire from which the U.S. military could never be extricated. Gold started to recede in September of that year. In 2013–14, the U.S. stock market jumped nearly 50 percent (after including dividends in the return) while gold fell 27 percent.

Some measure of doubt returned in 2014 when ISIS declared its caliphate straddling Syria and Iraq. War also came to Ukraine, damaging the West’s relationship with Russia. Adding to anxiety and discontent, the mass movement of migrants from the Middle East, Central Asia, and Africa into Europe accelerated in 2014 and 2015. Meanwhile, the slowdown in China and crash in commodity prices damaged emerging-market economies. In the United States, politics became more polarized before and after the election of Donald Trump.


Against this backdrop, gold moved sideways until late 2018 when it started to rise again following the midterm elections and several interest-rate cuts by the Federal Reserve. Trade tensions with China and Iran and Congress’s impeachment of the President all further fueled the recovery of gold until 2020, a year that has seen a rapid succession of major crises.

An enormous amount of uncertainty weighs on the economy, from the ultimate outcome of the pandemic, to the rising ranks of the unemployed, to a possible change at the White House, to relations with China, Russia, Iran, and others, to the mounting budgetary pressures on the federal government, and on states and cities. In short, this is Ron Swanson’s long-awaited moment in the sun.

It's frightening to see how easy it was to set the wheels in motion in major U.S. newsrooms.
Isaac Schorr

The announcement comes after Biden suggested the booster shot would soon be widely available.
Brittany Bernstein

Seven of the victims were children.
Zachary Evans