Has the U.S. incurred larger COVID losses than countries held up as role models?

The idea that America has incurred larger losses from COVID than any other nation has been widely repeated, but it’s not true. In reality, the United States has incurred smaller COVID losses than many other countries often cast as role models, once the total cost of the disease — in both lost lives and economic activity — is correctly measured and taken into account. A truly scientific approach to evaluating COVID policy relies on quantification of the tradeoffs involved, as opposed to only considering health losses.

The issue is how to measure the quantitative magnitudes of two separate strands of losses, the cost of disease prevention and the cost of the disease itself, to guide policy on minimizing the total impact. Economists routinely quantify and assess tradeoffs between health and other valuable activities to determine overall costs they impose. Doing so does not trivialize human life but acknowledges — as all of us must — that saving lives at any cost is not practical nor desirable.

Consider a somewhat extreme hypothetical example. Over 40,000 people die on U.S. roads each year, yet we don’t shut down highways. Instead of closing them — and losing all the economic benefits they provide — the government manages but does not eliminate the risks from bad drivers by regulating speed limits, enforcing DUI laws, and requiring people to have licenses to drive. Put differently, closing roads would entail a loss from prevention that would be higher than the value of the lives saved.

Tradeoffs obviously play a role in setting health-related policies. Yet some epidemiologists ignore tradeoffs when pushing for their preferred COVID prevention. They only measure one type of loss in terms of health. However, these medical scientists still drive to work like everyone else, even though their mortality would be lower if they did not. This shows how, in every other aspect of life, common sense balances the costs of prevention against its benefits in terms of lower mortality. But for COVID policy decisions, in many locales, the so-called scientists adhere to unscientific economic claims about the quantitative tradeoffs involved.

Economic science has developed standardized measures for quantifying the economic value of health losses. These conventional valuation metrics are routinely used by governments around the globe to evaluate health-related investments and help governments decide, for example, whether a guardrail is a cost-effective way to reduce traffic fatalities. Using these metrics, we calculated (in the figure below) the total COVID losses through June 2020 for various Western democracies, as a share of their pre-COVID GDP in the fourth quarter of 2019.

These estimates include both the losses from reduced economic activity (in blue) and the loss of lives (in orange), quantified in dollars using these standard methods. For example, the United States experienced an approximate 11 percent reduction in GDP for the first half of 2020. Adding the value of the roughly 120,000 lives lost over the same period, which according to standard metrics represents about 11 percent of GDP, brings the total loss to 22 percent of GDP. 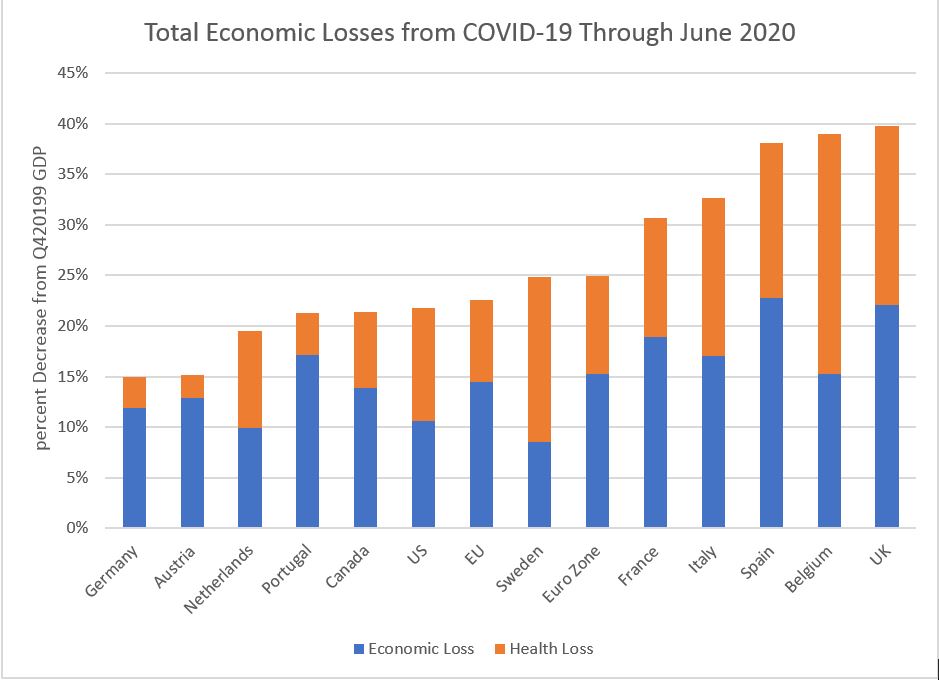 In calculating these losses, we used the latest available GDP data, first and second quarter of 2020, and the lives lost during that period. This actually biases the calculations against the United States, since larger and denser populations naturally tend to not only have more spread, but also larger per capita infection rates.

The relatively low total loss of the United States partly stems from allowing the economy to function more freely than some other countries. The bottom line is that the United States has managed to keep the total loss inflicted by COVID lower than, or similar to, that of many other European countries often touted as role models.

Although later GDP data are not available, existing forecasts for the rest of 2020 also imply that the U.S. will look even better than this once the second-half numbers come in. Euro-area GDP is forecast to fall 8.3 percent over all of 2020, compared with 4.9 percent in the U.S. When combined with end-of-year mortality forecasts from Washington University’s IHME, these forecasts imply a total loss of 13.9 percent of 2019 GDP for 2020 in the U.S. compared with 14.7 percent in the Euro area.

With most diseases, preventive behavior is very costly. That’s why there’s such a high prevalence of many of them, such as obesity or influenza. If preventive behavior were cheap compared to its negative impact, we would see less of the disease, as is the case for, say, polio.

Therefore, reducing disease-related losses through R&D and innovation is generally cheaper than more costly behavioral changes, such as shutting down schools or closing non-essential businesses. It is estimated that COVID has caused a total loss of about $3 trillion as of early September in the United States, most of it economic.

Given this staggering cost, a few billion extra dollars for R&D into therapeutics and vaccines is very cheap if successful, relative to other more costly behavioral forms of prevention induced by cutting economic activity.

Many of the president’s critics and other so-called experts ignore the science that has been developed to analyze the magnitudes of the policy tradeoffs between worthwhile competing goals. If they took a more holistic view — and relied on the economic science that allows us to quantify these tradeoffs — they’d see that when correctly measured, countries differ less in the total loss inflicted by COVID when prevention and health losses are negatively related. The United States is performing better than many of its purported role models, especially by reducing the global loss of the disease through innovation.

Editor’s note: This article has been updated to include a chart that was meant to be part of the original copy.

— Tomas J. Philipson, a professor at the University of Chicago, and Eric Sun, an assistant professor at Stanford University, served on the President’s Council of Economic Advisers, Philipson as a member and acting chairman from 2017 to 2020 and Sun as a senior economist from 2019 to 2020.

Recent video footage depicts the officers aggressively wielding reins, rather than whips, but not striking migrants with them.
Caroline Downey

The interview came amid a series of failures for the Biden administration.
Brittany Bernstein

Zachary Evans
In one email, a Biden business partner suggests Hunter will hold an equity stake for his father in a Chinese energy firm.