At best, redistribution from workers to the unemployed reallocates demand rather than increasing its total.

July was the final month of the historically disproportionate unemployment bonus of $600 per week. The termination or reduction of benefits will undoubtably make a difference in the lives of the people who were receiving them, but old-style Keynesians insist that the rest of us will be harmed too. They’re wrong.

Referring to the bonus sunset, Paul Krugman explained in August that “I’ve been doing the math, and it’s terrifying. . . . Their spending will fall by a lot . . . [and there is] a substantial ‘multiplier’ effect, as spending cuts lead to falling incomes, leading to further spending cuts.” GDP could fall 4 to 5 percent, and perhaps as much as ten percent, which is almost $200 billion less national spending a month.

Wednesday the Census Bureau’s advance retail-sales report provided our first extensive look at consumer spending in August, which is the first month with reduced benefits (reduced roughly $50 billion for the month). Did consumer spending drop by tens of billions, starting our economy on the promised path toward recession?

The red series in the chart below shows actual retail sales for each month of 2020. The virus itself caused off-the-chart drops this spring, followed by an on-the chart recovery soon thereafter. But in August, retail sales increased $3 billion above July, which is quite a normal monthly change. 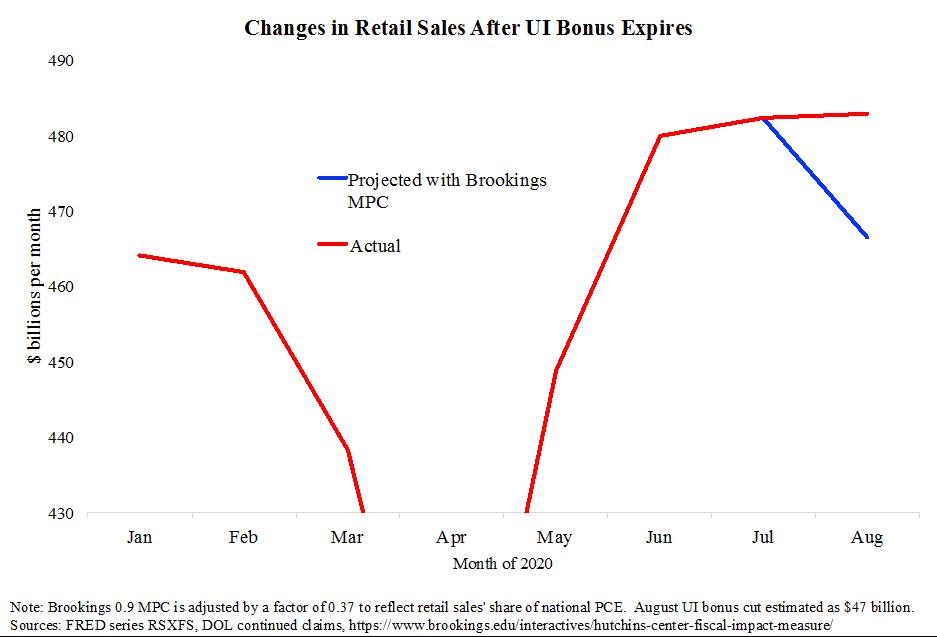 The blue series shows a forecast based on an old-style Keynesian model (I use the Brookings Institution, which provides more detail on its math than Krugman does; the Congressional Budget Office also asserts that cutting benefits would reduce national spending “in the short run.”) In sharp contradiction to reality, the model predicts a $16 billion drop, as the unemployed reduce their spending on retail and other necessities.

Two critical elements are missing from the old-style Keynesian approach. The first piece is that employment, which depends on benefits and opportunity costs to employer and employee, is a bigger driver of spending than government benefits are. For every person kept out of work by benefits, that is less aggregate spending that is not made up elsewhere in the economy.

The second missing piece is that taxpayers and lenders to our government finance these benefits and therefore have less to spend and save on other things. Even a foreign lender who decides to lend that extra $1 million to our government may well be lending less to U.S. households and companies. At best, redistribution from workers to the unemployed reallocates demand rather than increasing its total.

Caroline Downey
Within the last day, an estimated 11,000 migrants have congregated under the Del Rio international bridge on the Texas border.
View More
Loading...