The Triumph of Biotechnology and Private Capital

As President Recep Tayyip Erdogan ramps up Ankara’s operations in the Eastern Mediterranean’s dangerous power game, it will pay to keep an eye on the course of Turkey’s PPP-determined inflation rate.

With this column, I will begin a monthly review of the countries with the highest inflation rates. To qualify for inclusion on “Hanke’s Inflation Dashboard,” a country’s annual inflation rate must exceed 25 percent per year. That rate will be measured by me on the last day of the month. So, it will be a very current inflation measurement. I can make these timely measurements because I employ high-frequency data coupled with a purchasing power parity (PPP) model that I developed when I measured Zimbabwe’s 2007–08 hyperinflation. For countries in which the annual inflation rate exceeds 25 percent per year, my measurements have proven to be accurate and reliable. 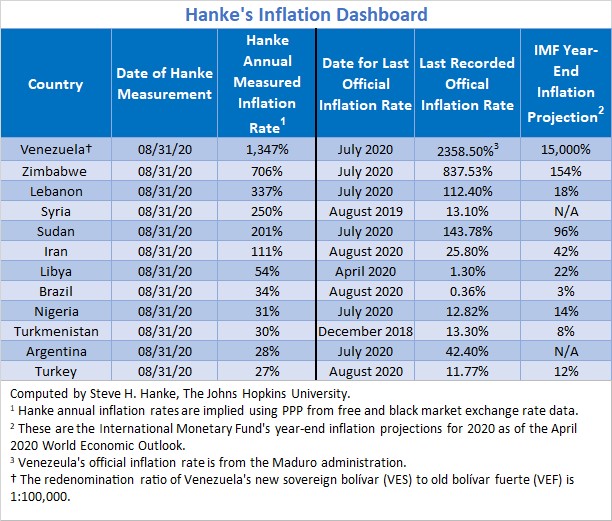 Now, let us move from the top of the rogues’ gallery to the bottom. It is there that we find Turkey. By my measure, its annual inflation rate on August 31 was 27 percent. That rate is over twice as high as the official annual inflation rate for August. How could that be? For one thing, I employ high-frequency data that allow me to make measurements on the last day of the month. Official measurements are not made on the last day of the month. So, different dates for measurement leave room for different rates. But, at these “low” double-digit rates, those differences in the timing of measurements cannot explain the large gap between my measurements and those reported by the government. The biggest factor accounting for the difference in rates rests on the fact that the “basket” of goods used by the government to construct the consumer-price index only includes 418 items. 418 may sound like a lot, but this basket still excludes thousands of other items that are bought and sold each day in Turkey. In contrast to the official basket, my purchasing-power-parity basket includes all goods, services, and assets that are exchanged in Turkey. This means that the PPP basket, the one I use, is a comprehensive, all-inclusive basket. So, my inflation measure takes into account price changes for everything bought and sold in Turkey, not just those items bought and sold in the government’s basket.

By contrast, the purchasing-power-parity concept that is the basis of my approach can be traced back to the Salamanca School in 16th-century Spain. But it wasn’t until the famous economist Gustav Cassel penned a 1916 article in the Economic Journal that the concept was named “purchasing power parity.”

PPP is a theory for exchange-rate determination. It asserts that changes in the price levels of two countries determines the changes in their exchange rates. PPP is widely used and has been popularized by The Economist magazine. Since 1986, The Economist has regularly produced its Big Mac Index. It is a basket (index) that contains one item, the Big Mac. And it is used to compare the purchasing power between two currencies and to determine whether a currency is over or undervalued.

PPP begins with changes in price levels (read: inflation) to determine changes in exchange rates’ movements. Given this sequence, some even refer to PPP as an inflation theory of exchange-rate determination. As I started to think about how to measure hyperinflation, I thought to myself, why not just reverse the process, starting with changes in exchange rates to calculate changes in price levels (read: inflation rates). It turned out that this idea worked like a charm. Indeed, extensive testing has shown that at annual inflation rates exceeding 25 percent per year, the PPP method for measuring inflation is very accurate and reliable. That’s why I believe that Turkey’s official data are underreporting inflation. My conclusion is supported by the market for the Turkish lira, a currency that continues to register all-time lows against the U.S. dollar, and by the fact that the Turks have accelerated the substitution of the greenback for the lira. Now, Turkish bank accounts denominated in lira and foreign currencies are almost equal in size.

Even though Turkey is at the bottom of Hanke’s Inflation Dashboard, I have chosen to highlight it this month. Why? When there are economic troubles, such as currency crises and accelerating inflation, they often move leaders to engage in foreign adventures. Indeed, these are often used to distract people from their economic travails and move them to rally around the flag. As President Recep Tayyip Erdogan ramps up Ankara’s operations in the Eastern Mediterranean’s dangerous power game, it will pay to keep an eye on the course of Turkey’s PPP-determined inflation rate.

Today, researchers spend nearly half their time on paperwork and administrative tasks, rather than research.
M. Anthony Mills