On August 27, Federal Reserve chair Jerome Powell revealed results of a reappraisal of monetary-policy implementation that he initiated in 2018. The “framework” review dealt with long-term policy beyond the current crisis. In Powell’s words, “To an extent, these revisions reflect the way we have been conducting policy in recent years.” The marginal changes may be marginal improvements but leave unresolved the fundamental dilemma of Fed policy: the central bank’s inability to attain its 2 percent inflation target.

For the second adjustment, the Fed will “[seek] to achieve inflation that averages 2 percent over time.” Is there a distinction between that statement and the Fed’s previous position of a “symmetrical” 2 percent target? Let the author know if you see one.

The Fed hopes that the new framework, by convincing the public the Fed really means to reach its target, will be self-fulfilling. The problem is, the Fed really meant it when Bernanke initiated the concept of a 2 percent target in 2003, when it officially adopted the 2 percent target in 2012, when it spent the equivalent of 20 percent of the U.S. economy for QE, and when it held interest rates below normal for a decade. Despite clear intent, the Fed has repeatedly failed.

The Fed didn’t fail for lack of ability. Anyone meeting its representatives and leaders cannot but be impressed by their knowledge, education, and intelligence. No sentient human being could doubt their commitment to reaching 2 percent. It’s just that they can’t.

The Fed has plenty of company. Comparably capable people at central banks throughout the world are failing too. After the Bank of Japan spent over 100 percent of its gross domestic product and held interest rates below normal for 25 years, even to negative levels, can anyone doubt its resolve? Forty percent of GDP spent, below normal interest rates for twelve years, zero or negative rates for eight years — is the European Central Bank’s determination in question?

The Great Inflation, with its shocking double-digit inflation and interest rates, left its mark. Along with the subsequent Volcker disinflation, the direct impact of central banks on inflation seemed clear. In recent history, however, massive, extreme, and unparalleled central-bank actions have had no discernible effect on long-term inflation. How to explain this dichotomy? As with so many other economic factors, monetary stimulus is subject to diminishing effects.

Chart 1 examines inflation compared with Fed monetary stimulus. Instead of viewing inflation as a change in prices, the chart measures inflation by changes in the historical value of a dollar in today’s terms, adjusted by the Fed’s preferred price index, core personal consumption expenditures (PCE), excluding food and energy. 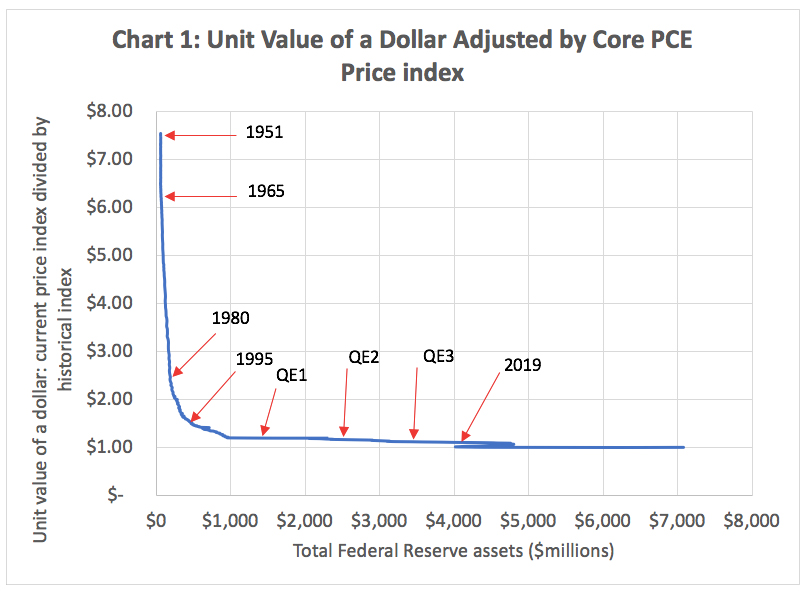 Around 1995, the responsiveness of prices to monetary stimulus changed. Massive Fed asset growth from quantitative easing produced little price movement, leaving today’s low inflation. This same relationship between monetary aggregates and the value of a currency (a hyperbola, for those who remember geometry) applies to other advanced economies and to other monetary measures such as M2 money supply. Diminishing effects don’t mean inflation is impossible; it just becomes very difficult, as the world’s major central banks can attest.

So, with diminishing inflation-responsiveness, how does the Fed clear its 2 percent goal? Chart 2 depicts the path of inflation since 1996, including 2004–07, when core PCE inflation ran above 2 percent. 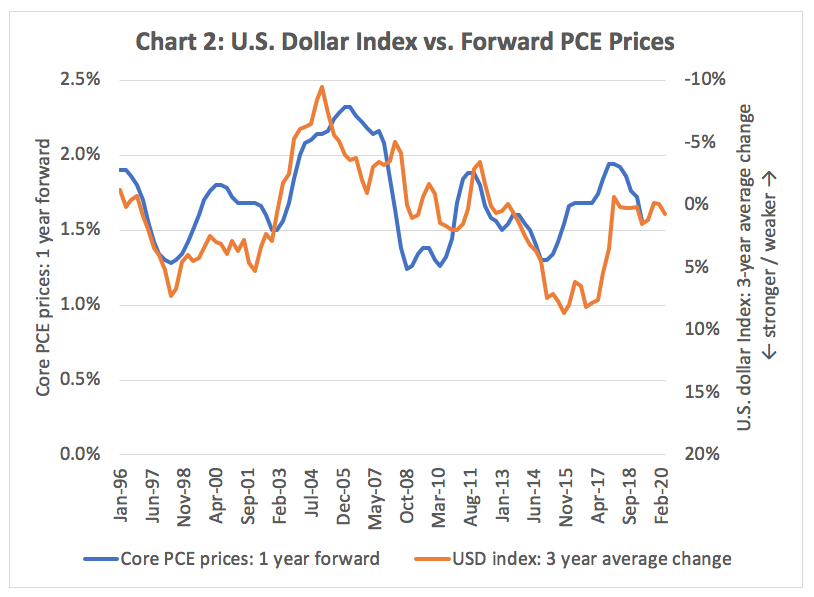 In chart 2, inflation is compared with the foreign-exchange value of the U.S. dollar. Changes in the dollar’s value are inverted hence a weaker dollar moves with higher inflation — the usual relationship as evidenced in the chart. With unresponsive inflation as depicted in chart 1, changes in the dollar’s foreign-exchange value are the major short-term influence on prices. It took a 37 percent depreciation of the dollar from early 2002 to mid-2008 to provoke the only sustained inflation over 2 percent in the last 25 years. That dollar weakness arose from loose monetary policy, which enabled massive debt expansion.

Chart 3 depicts inflation versus growth in banking-system assets, through which monetary policy is transmitted. 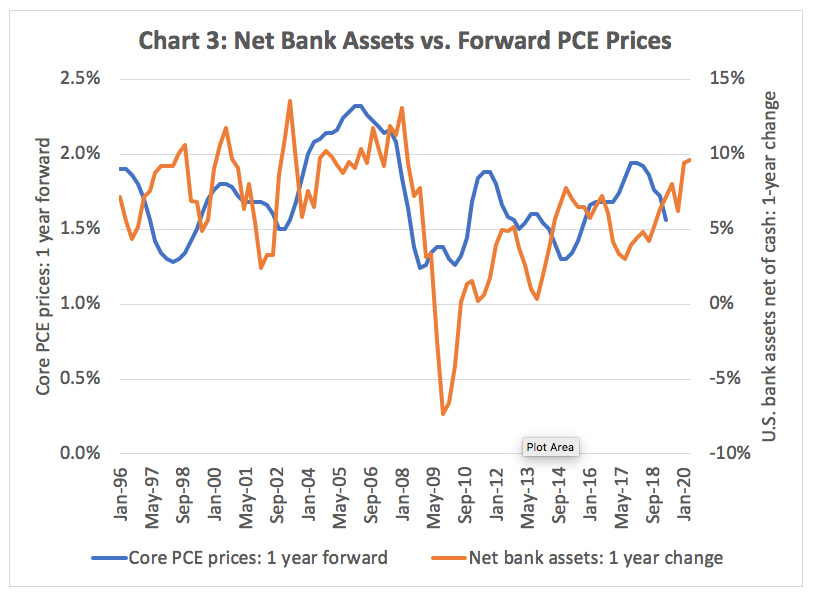 When inflation above 2 percent prevailed in the mid-2000s, bank-asset growth averaged in double digits. This was the run-up to the Great Financial Crisis.

It seems odd that such a small change in inflation is associated with the financial cataclysm, but chart 1 highlights how, when inflation is unresponsive, only extremely large monetary changes affect it. The banking system is much stronger now, but any comparable debt build-up will produce a crisis whether in banks or elsewhere in the economy.

On top of the risk of whether the Fed meets its target, there is risk in its pursuit. To spur 2 percent inflation, the Fed must maintain interest rates below normal for an extended period — as long as 20 years, in one Fed study. The Fed desires higher inflation so it has more latitude to cut interest rates in a downturn, but the contradiction of lowering rates more than higher inflation can boost them is exemplified by the coronavirus crisis. To gain 0.25 percent of inflation the Fed maintained interest rates 1.00 percent below normal, thus hampering its crisis response.

The Fed has sophisticated models underlying its 2 percent goal, but it must look at reality too. The prestigious Bank for International Settlements, the central bank for central bankers, has found that for OECD countries “there is a significant negative correlation between inflation and income growth during rather long periods.”


Between the Great Financial Crisis and the current one, the U.S. was growing above what most economists believe is its long-term potential. Inflation averaged 1.6 percent. That performance is as good as can be, given ongoing U.S. stagnation. The Fed’s framework was not the problem. The 20-year-old target is unlikely to be reached consistently and should change to reflect today’s U.S. economy. Stubborn persistence at 2 percent threatens America’s purchasing power and financial stability. Since the coronavirus crisis, the U.S. dollar has fallen 7 percent. Bank assets have grown 10 percent over last year, the fastest rate since the Great Financial Crisis. Both movements are likely short-term effects of the current crisis, but they bear watching for potential negative long-term impact.

Christopher Wray suggested that terrorist groups could potentially use the country as a launchpad for mobilization and future attacks.
Caroline Downey

James Craig has compared Whitmer's administration to a monarchical reign from which Michigan voters should declare 'independence.'
Caroline Downey

During a press briefing, Psaki announced that the CBP officers in question have been temporarily relieved of their duties.
Caroline Downey

Lithuania’s new recommendation to toss Chinese smartphones is a lesson for the U.S.
Jimmy Quinn

Among the issues that caused conversation to repeatedly stall was qualified immunity.
Caroline Downey

She fell prey to one of the oldest political tricks in the book.
Kevin D. Williamson