The Biden White House Will Pay for Playing Inflation Games

Will the Energy Crisis Be ESG’s Great Reset?

While Reagan pursued a nuanced trade policy focused on quotas, Trump has held firm on his commitment to tariffs.

“We should beware of the demagogues who are ready to declare a trade war against our friends—weakening our economy, our national security, and the entire free world—all while cynically waving the American flag.”
— President Ronald Reagan, November 26, 1988

Although despised by many on the left, Ronald Reagan was overall a popular president whose administration coincided with the beginning of an economic boom reflected in everything from the stock market and interest rates to unemployment and women’s wages. President Reagan is also famous for his eloquent defenses of free international trade and the deregulation of domestic markets.

Some key members of the Reagan administration are now working in the Trump administration. President Reagan’s first Deputy Trade Representative Robert Lighthizer is now serving one position higher as President Trump’s Trade Representative, administering tariffs, and negotiating trade agreements with Mexico, China, and other countries. President Reagan’s Associate Director for Economics and Planning at the Office of Management and Budget (OMB) was Larry Kudlow. Larry is now President Trump’s Director of the National Economic Council (NEC), a cabinet-level position. Anthony Dolan served eight years as a speechwriter for President Reagan, reaching the position of Deputy Assistant to the President and Director of Speechwriting. Tony is working in the Trump White House too, now as a Special Assistant to the President and Advisor for Planning, especially mentoring President Trump’s speechwriters. Elaine Chao was Chairwoman of the Federal Maritime Commission at the end of the Reagan administration and is now Secretary of Transportation. The purpose of this excerpt from You’re Hired! is to compare the two presidents in terms of two policy areas important to both: international trade and the deregulation of domestic markets.

What is the Opposite of a Trade War?

One of the best ways to appreciate the virtues of free international trade is to listen to one of Ronald Reagan’s speeches. In addition to his eloquent warning cited in the beginning of this chapter, Ronald Reagan also described “open trade policy” as “one of the key factors behind our nation’s prosperity.” He said that free international trade has “proven itself in the real world where we have seen free trading nations prosper while protectionist countries fall behind.”

We all agree that Mr. Trump does not talk this way about international trade. But we should also agree to put aside any love or hate for these men while we look at their policy records. Both Reagan and Trump were television entertainers before they were politicians, so their rhetoric may not necessarily reflect actual policies.

Protectionism comes in three principle types: import prohibitions, tariffs, and import quotas. An outright prohibition of foreign products (“import prohibition”) places American consumers captive to domestic producers, who would have the power to overcharge significantly for their products. For a century, prohibition and overcharging by factors of five to eight has occurred, for example, in the U.S. coastal shipping services market (Chapter 11 of You’re Hired!).

Two potentially milder forms are import quotas and tariffs. A tariff is simply a tax on imports, with the revenue going to the U.S. treasury. It raises the prices and profits of domestic producers, while reducing the U.S. profits and sales of foreign producers. Among other tariffs, the Trump administration placed a 25 percent tariff on steel imported from most countries.

Naturally, foreign producers do not like it when the U.S. collects tariffs. They ask their own governments to put tariffs on American products. Although in 2018 Peter Navarro (President Trump’s Director of Trade and Manufacturing Policy) confidently told the President that no country would dare retaliate against U.S. tariffs, tariff retaliation is exactly what happened in response to the Trump administration’s tariffs. The Trump administration started a trade war.

In contrast to tariffs, import quotas can (and did) offer protectionism without a trade war. An import quota is an upper limit on the number of imports allowed (an import prohibition is the special case when the quota is set to zero). To circumvent international law, import quotas are sometimes euphemistically named “voluntary export restraints,” referring to how foreign governments were “helping” us by limiting the amount of their U.S. exports. Instead of implementing a steel tariff, President Reagan used a steel import quota, limiting steel imports to 20 percent of the U.S. market. While better for consumers than an outright import prohibition, Reagan’s import quotas did hike steel prices because at the lower prices consumers wanted to import more than the quota allowed (prices were driven up by customer competition for a limited supply of imports). Through higher prices, Reagan’s various import quotas therefore harmed Americans buying autos, sugar, semiconductors, textiles, machine tools, and clothespins. While foreign producers of these products sell fewer units, they often have greater profits because Americans are paying them higher prices on lower supply. And as the Reagan administration acknowledged, American consumers may not understand that they pay more through quotas as they would with an announced tariff, which has obvious political advantages.

Enriching foreign and domestic producers by restricting supply and driving up prices, Reagan’s import quotas avoided a trade war that might have resulted if tariffs were used instead. Unlike tariffs that, as taxes, require foreign producers to share part of their revenue with the U.S. treasury, import quotas do not bring any revenue to our government. The quotas allow the foreign producers to keep the extra profits they obtain from charging higher prices. From an economic perspective, the Reagan administration used U.S. taxpayer money to bribe in effect foreign countries to stay out of a trade war. Perhaps Japan could have “retaliated” against Reagan’s quotas by setting quotas on their U.S. imports, but that would have been a funny kind of war in which Japan took money from their own consumers and sent it to our companies.

To put it yet another way, if we had a trade war in the 1980s and used all of our tariff revenue to bribe foreigners to stop retaliating, the end result would be Reagan’s international trade policy (Milton Friedman articulated this conclusion in an April 1987 Wall Street Journal article). As protectionism goes, import quotas are the ugly alternative to a trade war. Tariffs instead are the “America first” type of protectionism.

Although ignored by experts, the Trump administration uses a hybrid of tariffs and quotas, known as “tariff quotas.” Like an import quota, the hybrids allow the foreign companies to make tariff-free sales (at an elevated price) to American consumers, but they also allow the U.S. treasury to receive tariff revenue. 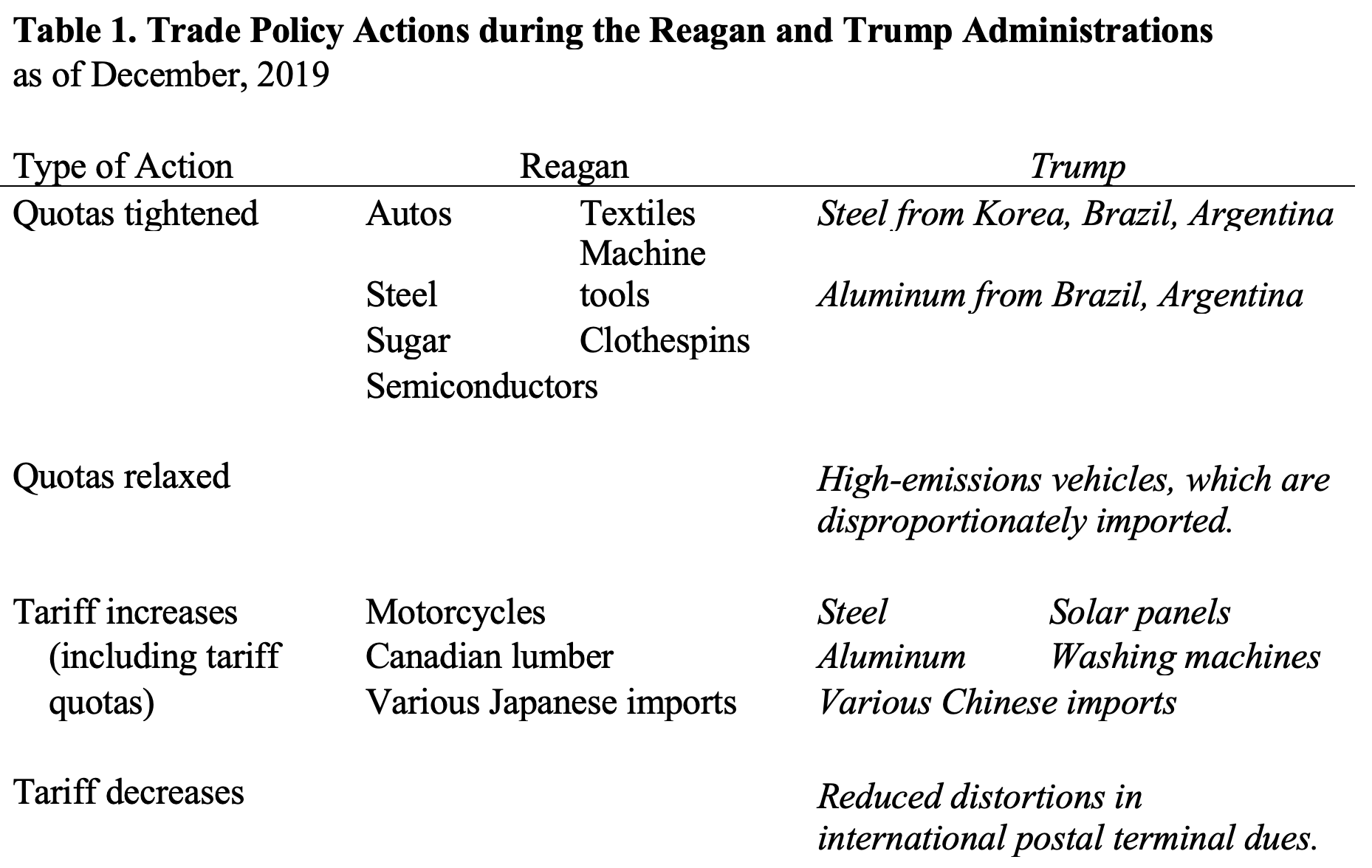 Despite the additional complexity, the overall conclusions remain. President Trump is the tariff man that he says he is, while President Reagan was a quota man. President Reagan did not always practice the free trade that he preached. As Reagan CEA member William Niskanen put it, the Reagan administration “was on both sides of [trade issues], articulating a policy of free trade and implementing an extensive set of new import quotas.” Another Reagan CEA economist Steve Hanke added “the share of American imports covered by some sort of trade restriction soared under ‘free-trader’ Reagan, moving from only 8 percent in 1975 to 21 percent by 1984.” The Trump administration also has key elements of protectionism, but unlike Reagan has so far mostly avoided protecting domestic producers in ways that profit foreign companies.