Professor Paul Krugman “has a good understanding of the essentials of international trade (the basis for his Nobel Prize Award) and explains them well,” I wrote in December in my new book about President Trump and his economic team. But I added that Krugman “is wrong about most [other] economic subjects . . . [and] helpful for predicting mistakes that would be made by the President’s opponents.” Now is a good time to assess whether the data still support such a harsh evaluation, with special attention to schooling, the economic recovery, and taxation.

Throughout the summer of 2020, Professor Krugman opined on the consequences of renewing in-person schooling. I found that remote learning in the U.S. has an opportunity cost of $1.6 billion per school day because pupils learn more effectively in person. While still in the realm of obvious economic results, Krugman agreed that “nobody knows . . . how we can educate America’s children without normal schooling.” Nevertheless, his amateur and partisan theory of disease trumped that assessment. He advised his five million followers that reopening school this fall would “be a complete disaster” that “would kill thousands” as it “disastrously reinforc[ed] the pandemic.”

Israel had an outbreak early in the summer that coincided with its reopening schools. In his opinion, that by itself justified withholding hundreds of billions of dollars of human capital from America’s children. (He showed his followers the series for Israeli cases through August 1, rather than the less alarming trend for deaths). Never mind that Sweden had not even closed schools in the spring, while several other countries reopened (without second waves) before the end of June. Never mind that already in June the American Academy of Pediatrics saw “a much smaller role in driving the spread of the disease than we would expect.” Never mind the promising results from summer camps and daycare centers here at home.

Many schools did in fact dare to open. The Mulligan children were enrolled in a couple of them, which were able to deliver thousands of pupil-days of in-person schooling without a single confirmed case of COVID-19 among students, faculty, or staff. Using a larger dataset, Brown University professor Emily Oster found that “schools aren’t super-spreaders . . . fears from the summer appear to have been overblown.” Krugman had no business stoking those fears with an improbable scenario from outside his expertise, when he knew that the human-capital costs to children of e-learning were enormous and guaranteed.

Krugman on the recovery

This spring Congress hastily prepared a pandemic assistance package that ultimately proved to pay the unemployed almost $1,000 per week (primarily a special $600 “bonus”), which was more than most of the beneficiaries were earning before they were laid off. At the macro level, the package resulted in a record increase in personal incomes at the same time that production and spending had dropped record amounts. The package, it seems, had gone too far and needed to be modulated when its major provisions expired in July.

Professor Krugman had, to put it charitably, a unique perspective. “I’ve been doing the math, and it’s terrifying . . . the end of benefits will push down overall consumer spending . . . more than 4 percent,” he wrote in early August. Furthermore, he insisted that drop would be followed by “a substantial ‘multiplier’ effect, as spending cuts lead to falling incomes, leading to further spending cuts.”

Although not mentioned to his readers, Krugman’s conclusion is the opposite of a decades-long consensus in our profession. Government can help the poor and unemployed with redistributive policies but is constrained by an “equity-efficiency tradeoff.” Arthur Okun likened the tradeoff to a leaky bucket, “The money must be carried from the rich to the poor in a leaky bucket. Some of it will simply disappear in transit, so the poor will not receive all the money that is taken from the rich.” If nothing else, a worker should retain at least a small amount of what he produces rather than giving it all over to the public treasury. Failing to heed this advice would reduce aggregate output and incomes.

Even putting incentives aside, there is pesky arithmetic. Aggregate spending includes not only the spending of government program participants, but also the spending (both consumption and investment) of those who finance the government. When government redistributes, the taxpayers and lenders to our government have less to spend and save on other things. Even a foreign lender who decides to lend that extra $1 million to our government may well be lending less to U.S. households and companies. At best, redistribution from workers to the unemployed reallocates demand rather than increasing its total.

Economics is an empirical science and even Okun’s tradeoff should continually be compared with real-world data.  Let’s look at the spending data beginning in August when unemployment payments were about $50 billion per month less than they were before. August retail sales showed a normal monthly increase despite the absence of so many unemployment bonuses. With the bonuses still gone, retail sales surged in September. 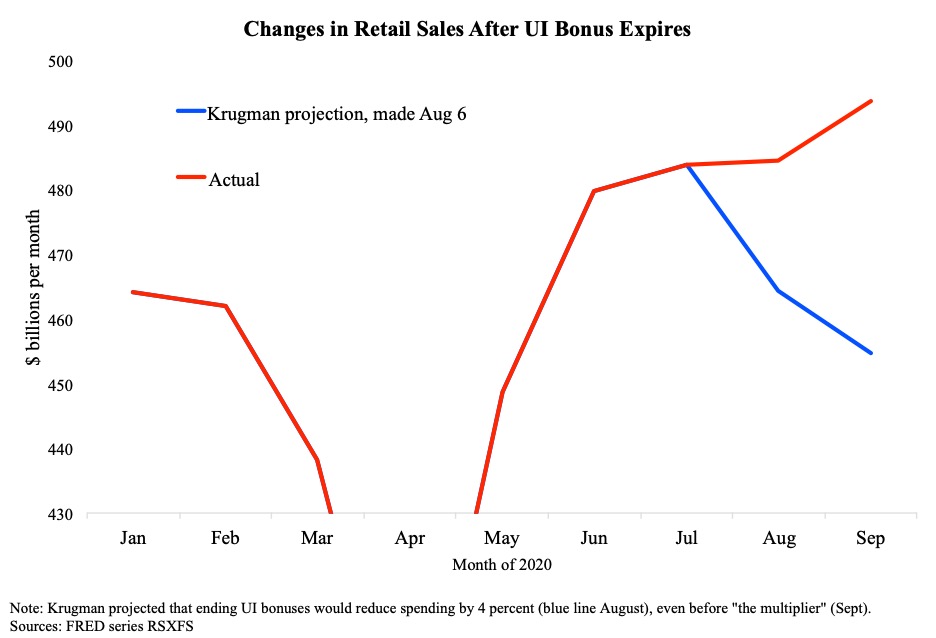 Returning to a 2017 theme, Professor Krugman asserts that “the channel through which corporate tax cuts are supposed to raise wages is . . . higher investment.” He also concludes that “repealing those corporate tax cuts won’t reduce wages . . . because of the preponderance of monopoly rents in modern corporate profits.”

Although I agree that the corporate tax is related to aggregate investment, I am surprised that he forgot so easily the conclusions of his generation of public-finance economists. They thought that the economic damage from business taxes came at least as much from distorting the allocation of investment across regions, industry, and firms as from reducing the total amount to be invested. My generation calls it “misallocations.” A prime example of misallocation is the low productivity of residential capital as compared with non-residential business capital. Raising taxes on business only makes that misallocation worse.

Professor Krugman also seems to forget how monopolies and cartels exercise their market power, which is to withhold some of their production in order to jack up prices. The Organization for Petroleum Exporting Countries (OPEC) is a famous example: They (try) to raise oil prices by instructing their members to produce less. Even if Krugman were correct that many corporations are monopolies, taxing them will only cause them to produce less, exaggerating the misallocation that comes from monopoly. Corporate-tax revenge on the monopolies may be sweet, but it lowers productivity and wages.

Here’s an idea that they still teach at in-person schools: Use competition policy rather than tax policy to deal with imperfect competition. 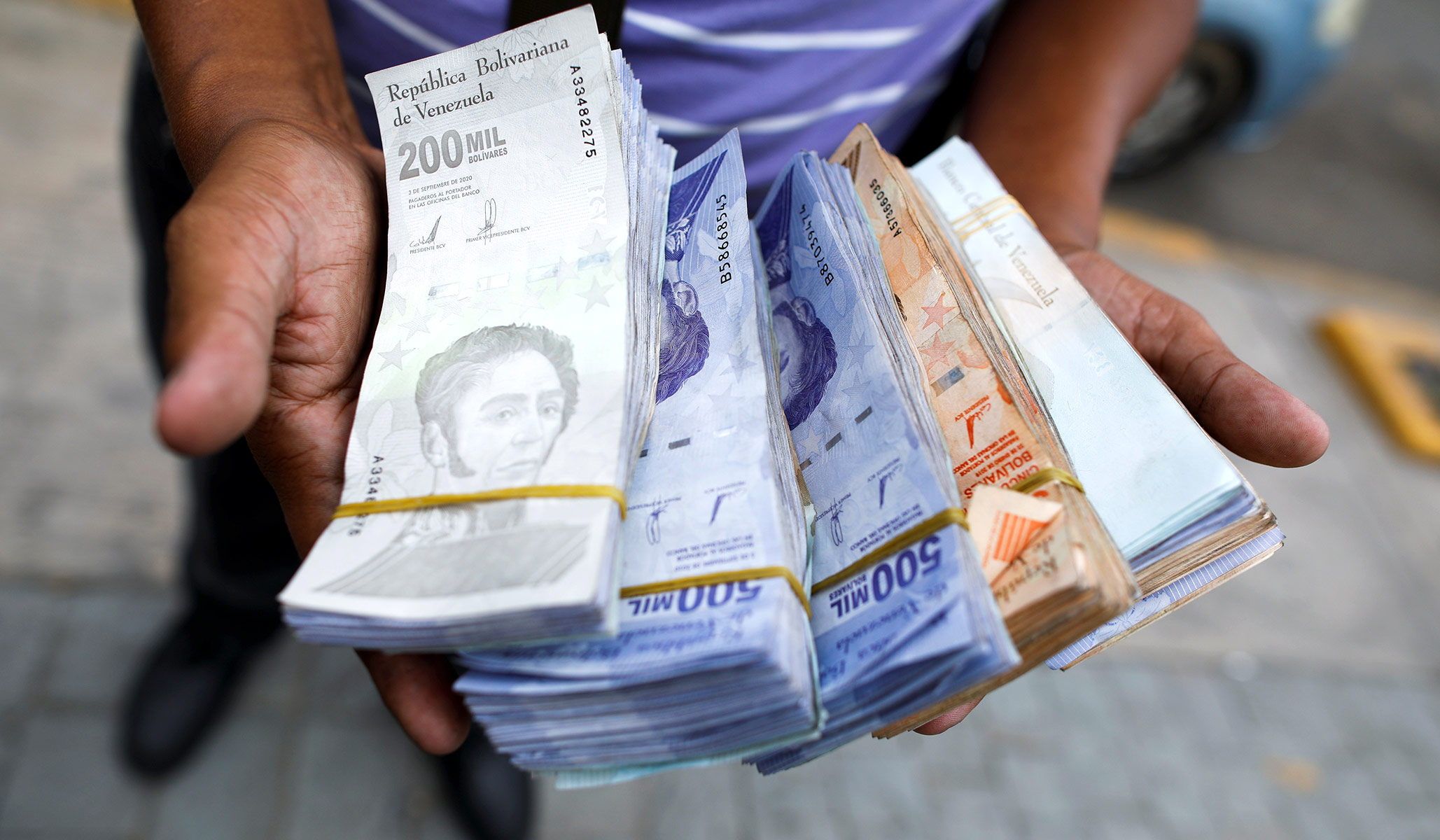 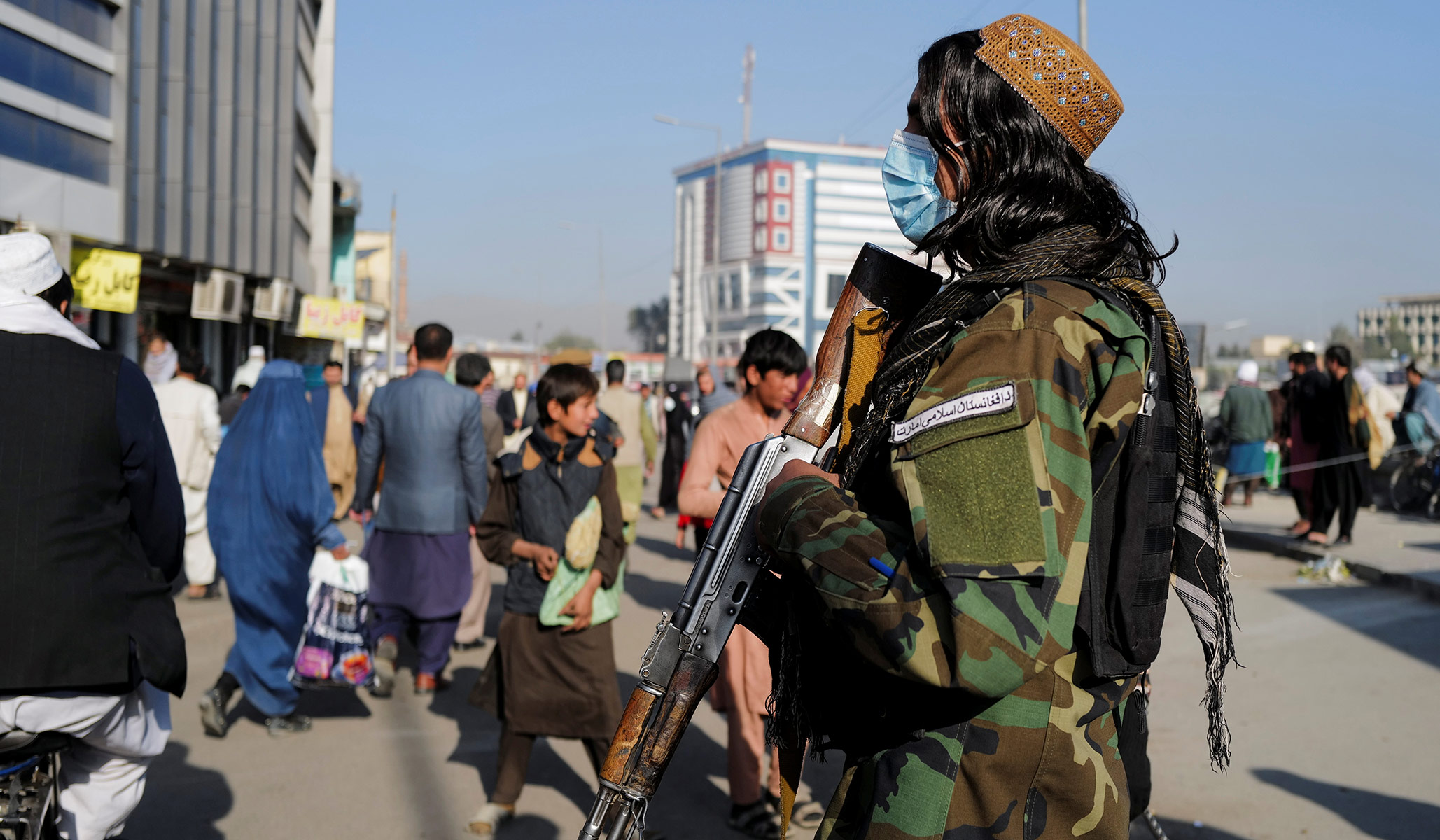 Biden-administration officials have repeatedly claimed that it is difficult to estimate the exact number of Americans in Afghanistan.
Zachary Evans

A women's group tried to run ads calling attention to the material, but they were rejected by all local stations.
Brittany Bernstein