Good and bad news from the Federal Reserve.

This week, I’m losing the gun range I’ve relied on for half a decade, the place where I bought my newest pistol and tore through many a paper target. Here in Virginia ranges were reopened pretty quickly, but the virus still took its toll. Indoor activity, older clientele: Do the math. I gave it a proper send-off by splurging on some special targets featuring an “evil clown” (read: Joker) wielding two grenades.

Lots of people are losing their favorite small businesses these days. COVID-19 and the related fear and lockdowns punched a massive hole in many industries’ revenue.

Thanks to the glacial pace at which federal agencies operate, though, it will be a long time before we know COVID’s fatality rate for businesses — the Bureau of Labor Statistics will release a tally in late 2021, the Census Bureau in 2023. But new research from the Federal Reserve gives us an early look based on various creative measures of business death.

The upshot is that some types of establishments, especially restaurants, are in deep trouble. The silver lining is that because other industries haven’t been hit as hard and the businesses closing are disproportionately small, the closures thus far probably represent a tiny share of total U.S. employment.

There’s nothing unusual about an American business, especially a small business, closing. Every year, we lose about 8.5 percent of all establishments, representing 3.5 percent of total employment. (When we count “establishments” rather than “firms,” we include situations where a company stays in business but closes some locations.) That’s the “creative destruction” that makes capitalism work: When one business can’t operate profitably, it’s replaced by another that can, putting both its employees and its capital to more productive use.

But with COVID-19, it’s not creative destruction so much as plain old destructive destruction. We’re losing businesses that have been profitable in the past and could be profitable again, post-pandemic, if they could hold on.

The most dire numbers in the new Fed report are for restaurants. Unsurprisingly, temporary closures are off the charts: They rose from less than 5 percent in February to more than 60 percent in April, and as of September were still above 20 percent, according to the authors’ analysis of data from SafeGraph. (SafeGraph tracks cell-phone locations to see where people are — and are not — going.)

Small businesses in “customer-facing industries” have fared poorly in general. The Fed researchers got access to numbers from two companies that serve such businesses: Womply, a credit-card processor, and Homebase, which provides software that tracks when employees clock in and out. As this chart shows, both sources show a massive spike in inactivity earlier in the year, followed by a dramatic but very much incomplete recovery. 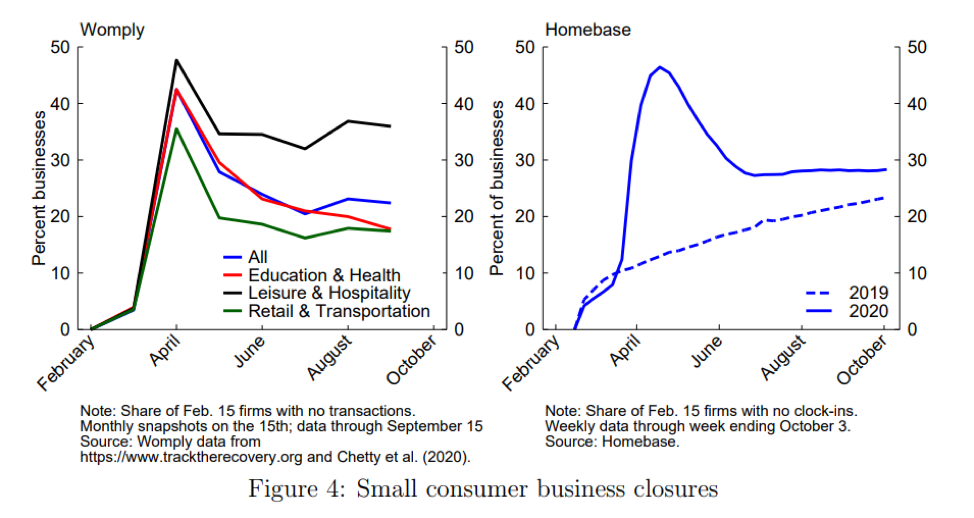 As I said, though, there’s a silver lining: The carnage here is limited to certain industries and concentrated among smaller businesses, so the closures are a smaller share of the total economy than one might expect. Indeed, a handful of indicators suggest businesses in general have already recovered. There’s no drop-off in the number of businesses with electricity accounts, for instance. And data from ADP — a major provider of payroll-processing services — suggest that the share of businesses, even small businesses, that remain closed has returned to its 2015–2019 level outside the leisure and hospitality industries. 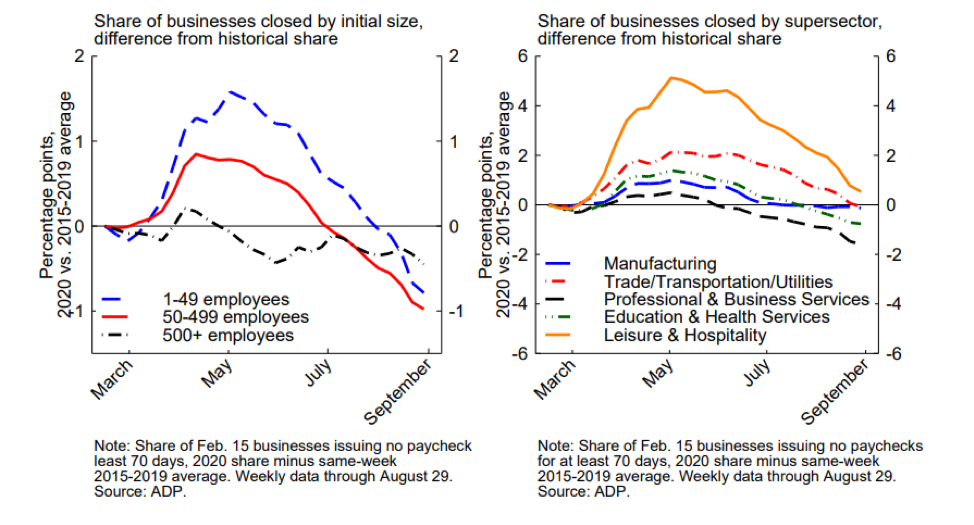 Using data from companies such as Womply, Homebase, and ADP has downsides. Their customers might not be representative of the broader economy, and trends in the numbers might be thrown off by quirks such as client turnover. But the report paints a fairly consistent big picture: Tons of businesses shut down temporarily, and plenty of small businesses in hard-hit industries are gone for good, but these businesses probably represent a pretty small share of overall employment. This suggests, I hope, that surviving businesses will have the capacity to rehire the unemployed once the virus subsides and economic activity rebounds — unless, of course, lots more of them go under before then.

Speaking of economic activity, this week also saw the release of another big-picture piece of economic news: quarterly GDP data. GDP was $17.3 trillion in the second quarter of 2020 (measured in 2012, seasonally adjusted dollars) but rose to $18.6 trillion in the third. That’s a rise of 7.5 percent in a single quarter, or an “annualized” growth rate of about 33 percent, though it’s still 4 percent below the GDP we saw in the final quarter of 2019. We’re not caught up to our previous level, to say nothing of getting back to the old trend line, but things are looking up as we head into the fall.

The fall, naturally, being the time when temperatures drop, people gather indoors, and we face the greatest risk of a COVID-19 resurgence.

‘There was no justification for some of the language included in this letter,’ the association's apology to its members says.
Zachary Evans

The Court declined to immediately block the law.
Brittany Bernstein

CDC Director: 'We May Need to Update our Definition of Fully Vaccinated' as Booster Eligibility Increases

'We will continue to look at this. We may need to update our definition of fully vaccinated in the future,' Walensky said.
Brittany Bernstein

John McCormack
In extensive conversations with NR, the Trump legal adviser behind the memo advising Pence to reject Biden electors claims it doesn’t reflect his own views.
View More
Loading...