Inflation Is Here: What’s Next?

It’s Time to Transform the WTO

The common presumption that the federal deficit doesn’t matter is entirely wrong.

‘Who the hell cares about the budget” — Donald Trump. “Debt is money we owe to ourselves.” — Paul Krugman. “Future generations will pay the price for runaway national debt.” — Heritage Foundation.

The president may be right that no one cares about the budget, but the ballooning federal deficit contributes to a ballooning trade deficit he has failed to close. The liberal economist is factually wrong; increasingly we owe the national debt to foreigners, but, more important, the deficit is coming out of the hides of U.S. manufacturing workers Krugman ostensibly supports. The conservative think tank is right that younger generations will pay for the deficit in the future, but they also are paying dearly for it now.

The common presumption that the federal deficit doesn’t matter is entirely wrong. The deficit bill is being paid now in lower investment, slower growth, and vaporization of above-average middle-class jobs. 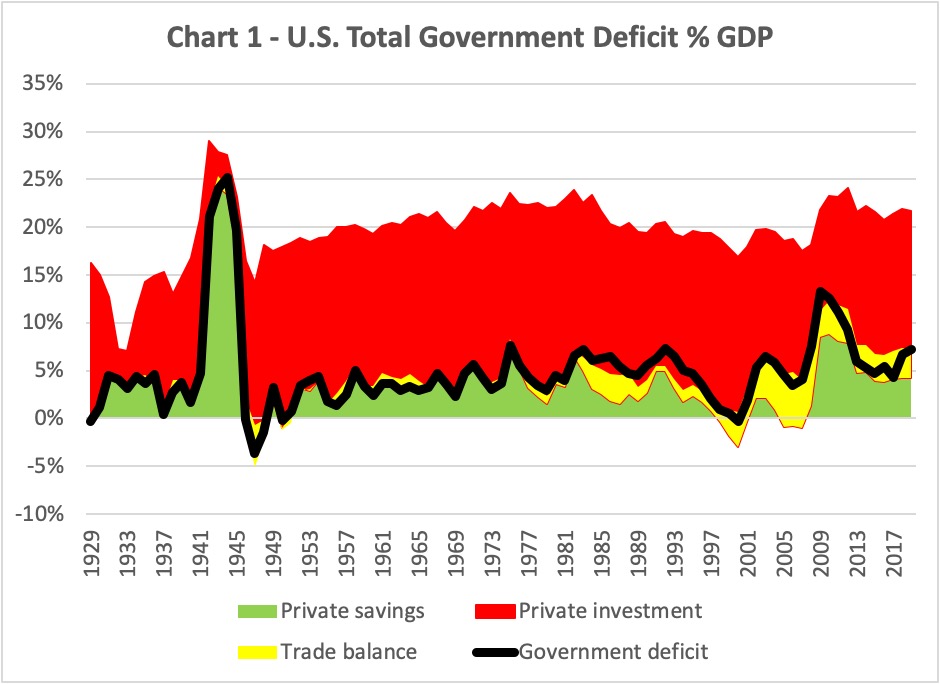 The ironclad relationship in Chart 1 between saving, investment, international flows, and government deficits means that any deficit increase comes with reductions elsewhere. To a large degree, as shown in Chart 2, increased deficits come from lower investment. 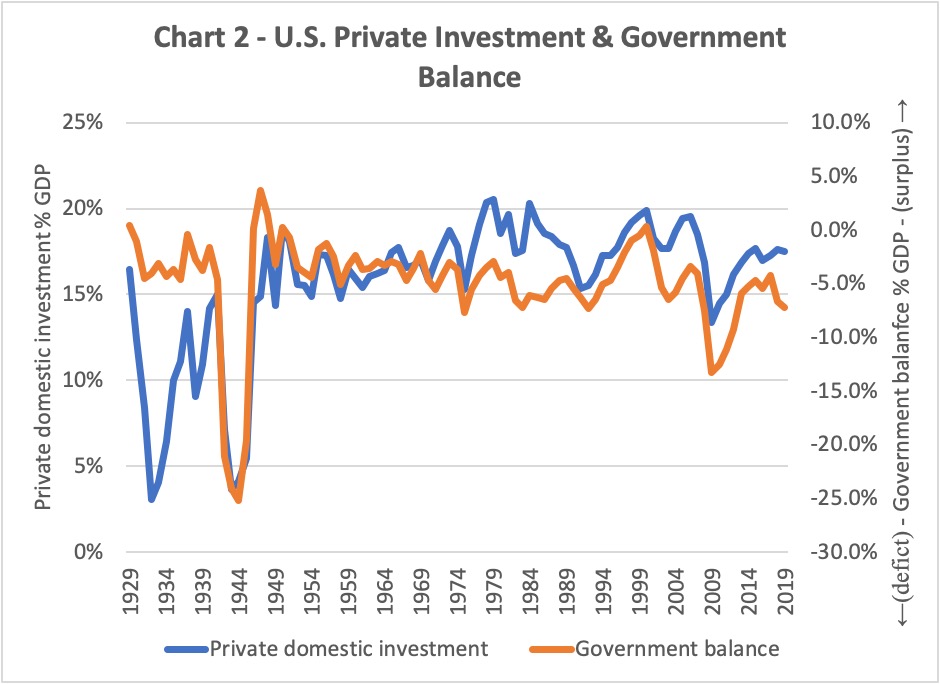 Investment and deficits vary together with the business cycle, but Chart 2 illustrates that they have the same relationship throughout the cycle. Whether the economy is in growth or recession, when deficits expand (going lower on Chart 2), investment contracts and vice versa.

These byproducts of government deficits — lower consumption, investment, and net exports — all are negative for the economy. A famous quote regarding deficits came from former president Richard Nixon who, in announcing a 1971 stimulus, proclaimed he was “now a Keynesian in economics.” In the 19 years before his statement, U.S. government deficits averaged 3.3 percent of GDP while growth averaged 3.7 percent. Since then, deficits have averaged 5.4 percent of GDP with growth of just 2.8 percent. If, as found by CBO, deficit increases are financed one-third by lower investment with an average ratio of GDP to capital stock during this period of 33 percent, then higher deficits caused a decline in annual growth of 0.2 percent, over 20 percent of the slowdown experienced.

Reduced growth broadly affects everyone but is especially injurious to younger generations facing a lifetime of fewer and less gainful jobs. The brunt of government and trade deficits is concentrated on manufacturing workers. The negative correlation between federal deficits and manufacturing employment is very high, but some of this is due to cyclical factors. Economists commonly take ten-year statistical averages to reduce cyclical distortions. Chart 3 exhibits ten- year averages for federal deficits and manufacturing employment over the last 20 years. 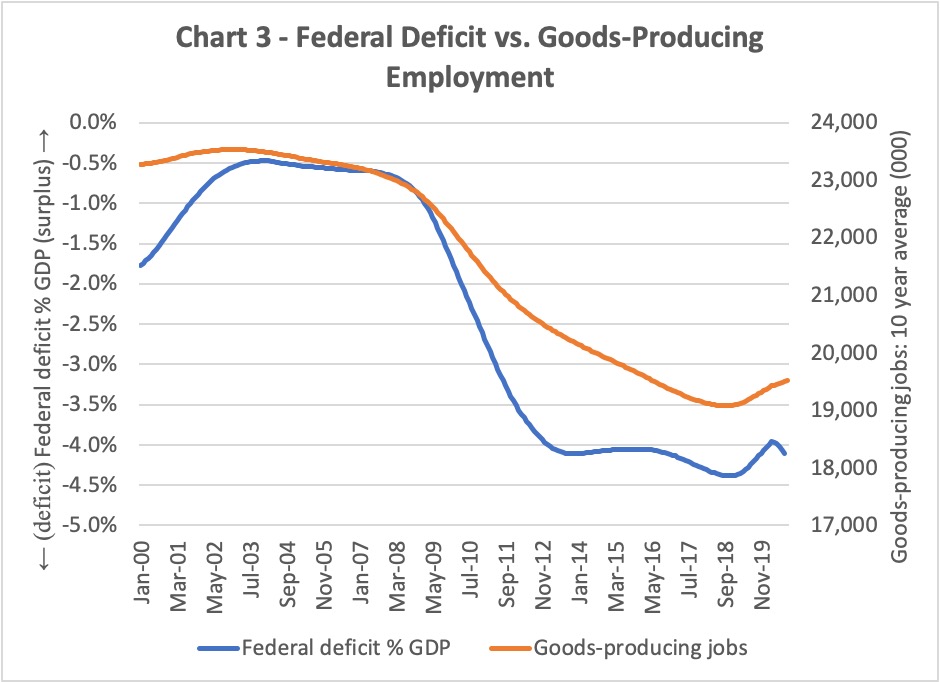 After the 1990s economic boom following the Cold War peace dividend, the ten-year average federal deficit fell to as little as 0.5 percent of the economy. The aftermath of the great financial crisis and high government spending that followed left average deficits over 4 percent of GDP. During this time manufacturing jobs fell by 4 million, a 17 percent decline.

The loss of manufacturing employment is particularly grievous considering the higher compensation for those jobs compared to alternatives in the service sector. As of September 2020, goods-producing jobs had average weekly earnings of $1,198, more than 20 percent above the $988 for private service jobs. Annualized for 4 million workers, the resulting wage gap of $44 billion represents 0.2 percent of GDP lost each year because of deficits.

Government deficit advocates argue that multipliers — the knock-on effect from initial deficits — boost growth, but there is not meaningful consensus among economists on the magnitude of these multipliers (to the extent that they can be detected). Consumption, investment, and net exports also have multipliers, which offset a deficit multiplier.

That said, deficits may be an efficient way to inject monetary stimulus into an economy. When the economy turns down, private investment is unlikely to immediately draw on monetary stimulus so government borrowing could do so, but monetary stimulus has had diminishing effects for decades, not only in the U.S., but in Japan and Europe as well.

The massive coronavirus intervention by the Federal Reserve, amounting to 15 percent of GDP, may be enough to overcome the headwinds that have made monetary stimulus less effective and is comparable to the CBO’s 2020 federal deficit forecast of 16 percent of GDP. This level of deficit is high enough to make whatever contribution it can to recovery.

Currently, private-sector investment is forecast to jump by Goldman Sachs and others. But higher government deficits could crowd this out. Retail sales are at record highs while August’s trade deficit was near its record (which preceded the great financial crisis) suggesting there is no shortfall of aggregate demand. Third-quarter growth is forecast at 25 to 35 percent annualized, shattering by 50 to 100 percent the all-time U.S. record rate of 16.7 percent. More deficit spending will just get in the way of private-sector recovery, hamper investment, and squeeze U.S. manufacturing.

The government deficit does indeed matter for both present and future generations. What we really owe ourselves and our children is to close it.