Is the Biden administration prepared to confront China’s rare-earth-mineral advantage?

The Financial Times broke an important story on February 16 in which it detailed how China is drawing up plans to disrupt the U.S. defense industry. Not for the first time, it seems that China is considering using its control over rare-earth metals that are crucial for the production of many weapons, including the F-35 fighter jet, to cause difficulties for the U.S. To put this in context, an F-35 contains 417 kilograms of valuable rare earths — minerals over which China has a virtual choke hold. Just what are rare earths? They cover 17 important elements in the periodic table, including many elements that are not household names, such as Dysprosium, Praseodymium, and Ytterbium.

And that’s not all. China has an outsized dominance in what I term the Three Ms: 1) Mining and Mineral Engineering, 2) Metallurgical Engineering, and 3) Materials Science and Engineering. When it comes to rare earths and the Three Ms, China is fully aware of just how strategically important their position is.

As the Global Times, a state-owned Chinese newspaper, put it: Rare earths are “an ace in Beijing’s hand.” As far back as 1992, Deng Xiaoping stressed that “the Middle East has oil; China has rare earths.” Importantly, China knows that rare earths can be weaponized. In May 2019, China’s Natural Development and Reform Commission, a body that oversees Chinese policy shifts, pointedly brought up rare earths in a question-and-answer bulletin regarding the prospects of a rare-earths-export ban. The notice read: “Will rare earths become China’s counter-weapon against the US’s unwarranted suppression? What I can tell you is that if anyone wants to use products made from rare earth to curb the development of China, then the people of the revolutionary soviet base and the whole Chinese people will not be happy.” And now we learn from the FT that the Ministry of Industry and Information Technology is refining China’s rare-earths-weaponization strategy.

These strategies amount to more than an idle threat. Indeed, China has used export bans before. In 2010, China cut its exports of rare earths after a Chinese trawler collided with two Japanese Coast Guard ships in the East China Sea. While the World Trade Organization ruled against these Chinese restrictions then, they are still a potentially viable threat moving forward.

To underline the importance and potential potency of the rare-earths weapon, President Xi Jinping has a habit of visiting rare-earths mining sites and plants that produce the precision magnets that rely on rare earths.

But rare earths are not just vital for many weapons systems. Far from it. They are also used in a wide range of consumer products from iPhones to DVD players to rechargeable batteries. They are also critical for many “green” products, such as LED lights. Many key products, such as motors in electric cars and the generators in wind turbines, contain specialized magnets that require rare earths, and China produces 90 percent of those magnets.

How did China attain such dominance across the board in rare earths? As someone who landed his first faculty position and cut his eye teeth on mineral economics in the late 1960s at the Colorado School of Mines, I have long suspected that China must have invested heavily in the Three Ms.

So, let’s take a look. The chart below shows that, when it comes to the world’s top-flight universities, China is nowhere to be found in the top 20. 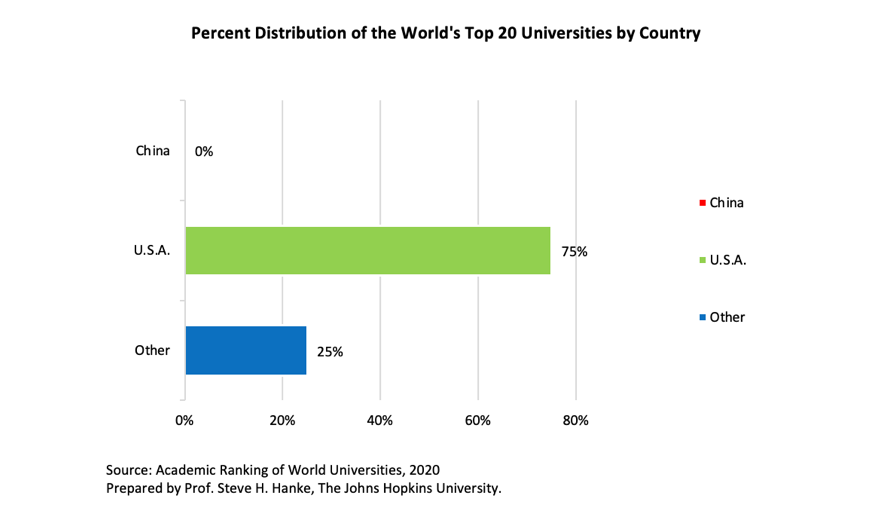 But, when we move into the Three Ms, things change dramatically. China dominates in Mining and Mineral Engineering, with nearly half of the world’s top-20 programs in those fields. 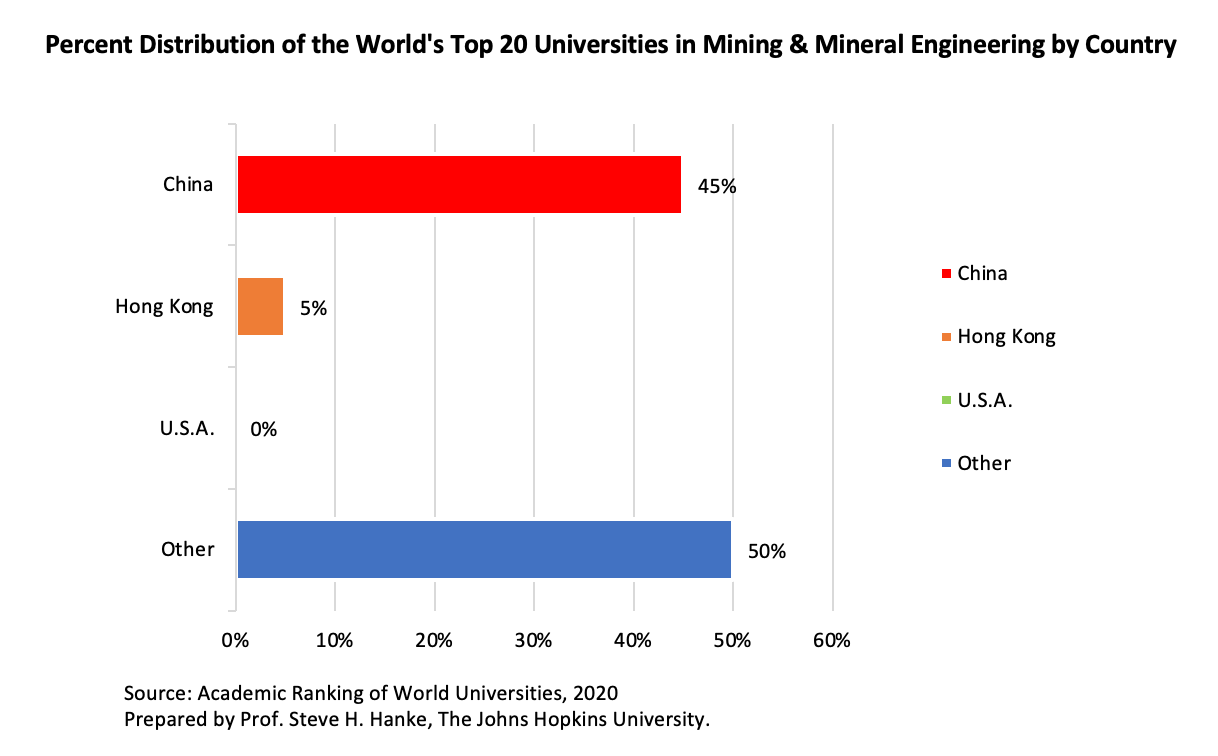 When we move to Metallurgical Engineering, China holds down 45 percent of the top-20 programs in the world. 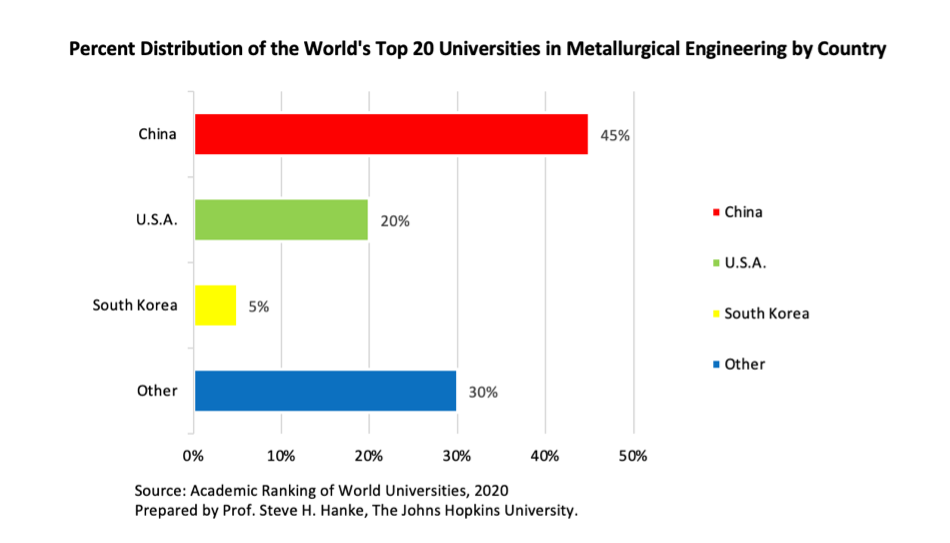 In Materials Science and Engineering, China slips, but still holds down 25 percent of the world’s first-class programs. 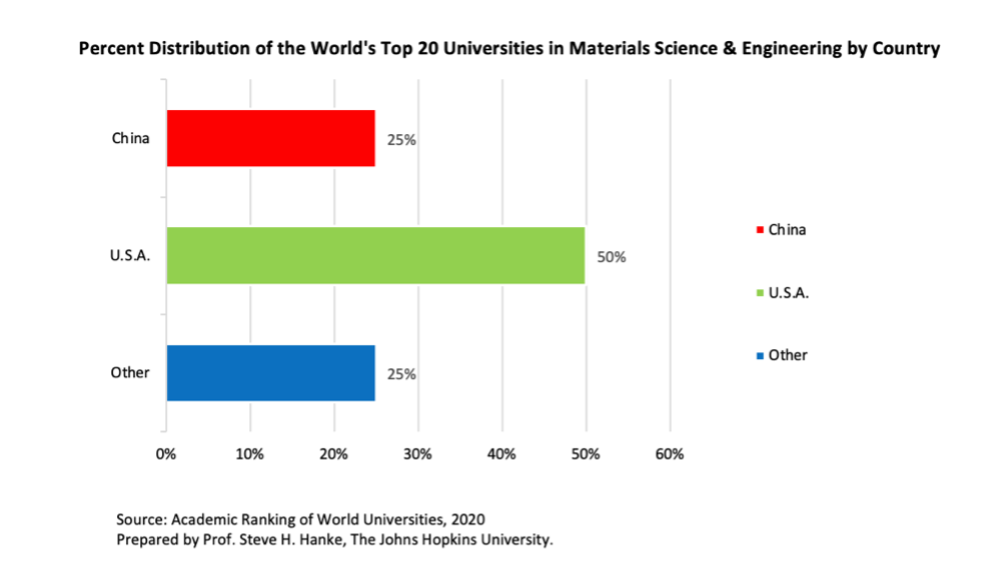 Just how has China secured such a position in educational fields relating to the Three Ms? The answer to this question is hard to nail down precisely. We have Deng Xiaoping’s quip about rare earths in 1992. So, we know that the Chinese leadership was at least aware of the importance of the Three Ms then. But, it wasn’t until 2001 that I was able to turn up specific evidence of the Chinese government pouring money into education and development of the Three Ms. This is in sharp contrast with the United States, where the entire Bureau of Mines and its important Division of Mineral Economics was abolished in 1996.

In 2001, China launched its tenth five-year plan for National Economic and Social Development. It was signed by none other than Zhu Rongji, China’s premier at the time. According to the plan, China aimed to make good use of its abundant mineral resources and enhance traditional industries (such as energy, metallurgy, chemical, machinery, automobile, building materials, construction, textile, and light industries) with high, new, and advanced technologies. The measures included improving product variety and quality as well as speeding up development of universal, key, and accessory technologies. These objectives were to be supported by university investments in the relevant fields.

So, Mining and Mineral Engineering, Metallurgical Engineering, and Materials Science and Engineering was supported by the five-year plan. The Communist Party gave out instructions, and in the sphere of the Three Ms, the results have been impressive. Indeed, over the last 20 years, China has put its money where its mouth is by making an over ten-fold increase in research and development expenditures. And those expenditures have not just been for rare earths. They have gone into a variety of critical materials that are essential in the global transition to a “green” economy. For example, in the sphere of batteries alone, China dominates the production of the necessary raw materials (i.e., lithium, natural graphite, and synthetic graphite). China also dominates in the chemical processing required for inputs for the production of batteries. In addition, China dominates in the spheres of battery anode and cathode production as well as in the production of battery cells. And that’s not all. Chinese firms produce 72 percent of the world’s solar modules and 45 percent of its wind turbines.

When it comes to rare earths, China is clearly locked and loaded and ready to apply maximum pressure on the Biden administration. Realizing this fact, President Biden signed an executive order yesterday requiring multiple federal agencies to conduct 100-day reviews of supply chains for semiconductors, pharmaceuticals, electric vehicle batteries, and critical minerals used in electronics. Yet this is nothing new: Biden’s predecessor, Donald J. Trump, signed a similar executive order on September 30, 2020.

Assad and the Christians of Syria.
Sam Sweeney