The narrative that international trade is growing in importance misses some key points. 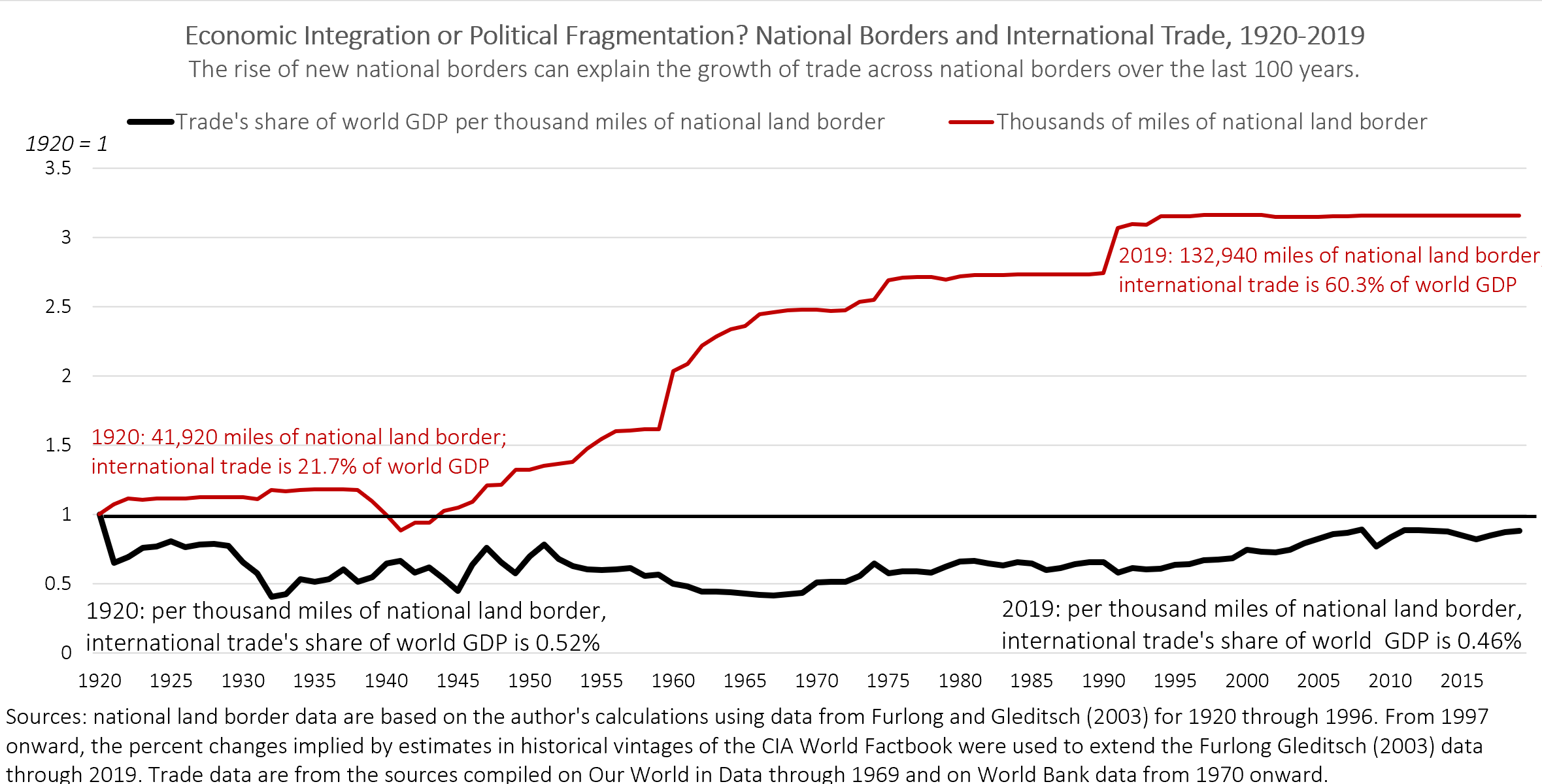 Yet actual economic integration between different geographies would almost certainly decrease massively. California has an economy larger than all but a handful of countries, and new national borders tend to impede trade by 20 to 50 percent. The fate of workers in California would end up less intertwined with the fate of workers in Nevada, or workers anywhere for that matter. And this would happen precisely as the role of international trade in California’s economy surged. To indulge the conventional interpretation of trade statistics, then, would be to commit an error that gets everything about the economics of California’s new national borders backward. Yes, international trade would increase statistically, but that increase would reflect the growth of national borders, not their growing irrelevance. And it would reflect economic localization rather than economic globalization.

As the chart above shows, the role of national borders in shaping international-trade data is no hypothetical. It’s the story of the world economy over last 100 years. And it’s a story you cannot see if you abide by the conventional interpretation of international-trade growth.

As empires crumble, new sovereign states with new national borders of their own are born, and trade across national borders increases accordingly. In 1920, the Austro-Hungarian and Ottoman Empires had recently collapsed in the wake of World War I. While the empires of Western European powers such as the United Kingdom and France would not start their collapse until the 1950s, the collapse of the USSR in the early 1990s triggered the most recent of the upward waves in national land border visible on the chart. All in all, miles of land border slightly more than tripled from 41,920 in 1920 to 132,940 in 2019, as international trade’s share of GDP slightly less than tripled from 21.7 percent in 1920 to 60.3 percent in 2019. The broad similarity in the size of their increase — both roughly tripled — suggests their rise together is no coincidence.

But stability, once variation in the quantity of national land border is factored in, may be the most remarkable attribute of international trade’s role in the world economy. In the 100 years that span 1920 to 2019, international trade’s share of world GDP never dipped below 0.21 percent or above 0.51 percent. These upper and lower bounds have also been retraced with a regularity that suggests they may be more than coincidence. The border-adjusted low of 0.21 percent of world GDP per 1,000 miles of national land border was reached in the Great Depression of 1932 as well as at the height of the Cold War in 1967. The overall series high of 0.51 percent came in 1920, when far less national border existed than today. Since 2000, the quantity of border has stayed roughly stable, and international trade’s share of world GDP per thousand miles of national border has not budged above the 0.46 percent it registered in four separate years, including in 2019.