With all the trillion-dollar numbers spinning about government policy these days, it’s easy to lose perspective on the scale of recent federal spending. We decided to put the past year’s policy into perspective by calculating the future tax hike that would be necessary to pay the bills rung up since January, 2020. What the average American owes for the stimulus will shock you.

The exercise is not farfetched. Rumors spread throughout Washington last week that the Biden administration is considering tax hikes to pay for COVID-19 relief enacted this year and last. To some extent, it is amazing that the U.S. experienced a 32 percent drop in GDP in the second quarter of last year and did not dive into a depression, and some credit is surely due to those who crafted stimulus bills. On the other hand, the five bills passed to provide relief, once one subtracts out loans that will be repaid, together added $5.3 trillion to the debt that you, dear reader, will have to pay back someday. Think of COVID-19 relief as a new car payment, of course without any delivery of four wheels, an engine, or a chassis. When you see the numbers, you will realize that the comparison is not an exaggeration.

This is not an academic exercise. The thing about debt is that it eventually has to be paid. There is no such thing, annoying economists like us tend to remind too often, as a free lunch. Even if the debt is rolled over ad infinitum, the lunch is not free because taxpayers have to pay higher interest each year to cover the additional borrowing, which crowds out other government services. Milton Friedman famously argued against aggressive stimulus because, he said, taxpayers would look ahead to their future tax hikes and save today to prepare themselves for the worst. Whatever the government tries to do will be futile.

It is possible that lower spending will eventually offset the debt from all this stimulus, but what if, as the Biden team signaled this week, the stimulus bill is paid for with tax hikes? Just to make it personal, wouldn’t you like to know what your tax bill will be for all the stimulus packages, so you can, with your usual rational panache, save in order to finance your new liability just as Friedman suggested all rational people would do?

To find out, we relied on a methodology that was developed by one of us (Jensen) and his coauthor Aspen Gorry in a 2011 article. The idea is that the current distribution of taxes paid is the result of a political process that has evolved in almost Darwinian fashion over time and thus is likely to persist. Tax hikes come and go, but the basic distribution of taxes paid varies much less than you might think, with the wealthiest paying the vast majority of taxes under both Republican and Democratic administrations. It is highly unlikely that a bill as high as $5.3 trillion will be distributed differently from today’s taxes. The richest of the rich simply don’t have that much money. Once we accept that assumption that the future tax hike will be distributed according to today’s distribution of taxes, we can estimate the tax bill for each income level. 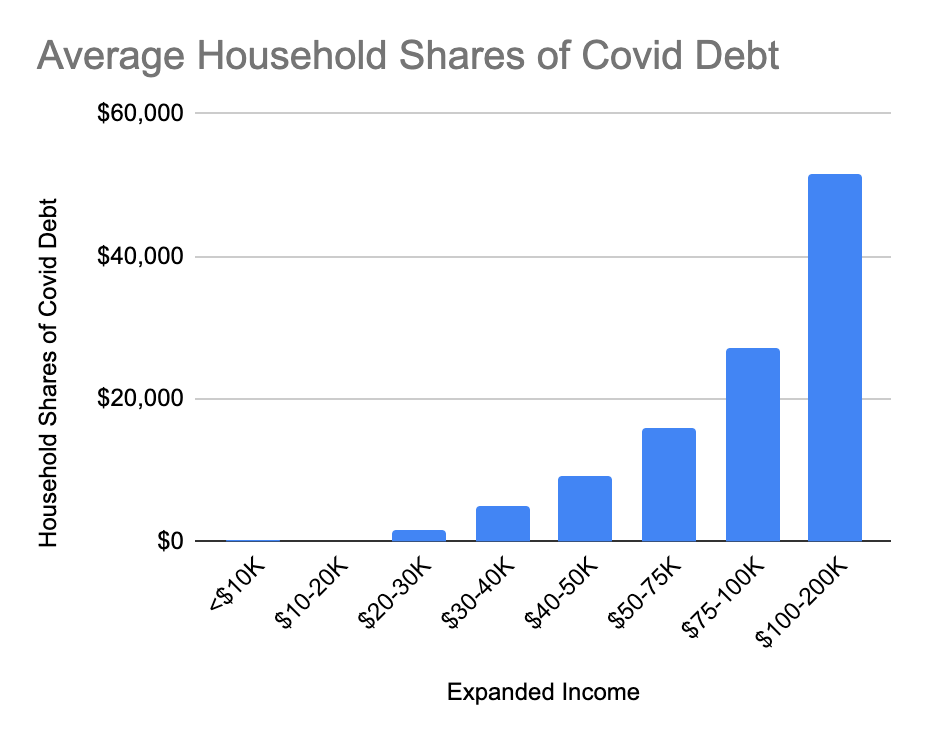 And what if the debt is never paid off, just rolled over and added to? The typical American family can expect to receive $350 less in the way of government services or tax cuts, not just this year or next, but forever, just to pay the interest on the debt. That’s if interest rates stay low — the Congressional Budget Office projects an average of 1.3 percent through 2050. With the same rosy assumption, a family with income between $500,000 and $1 million will shoulder $4,000 per year, forever. If you think interest rates will be higher, just take the liability charted above and hit it with the interest rate, and you will have a good guess for how much you will owe.

One final and downright depressing thought is that these costs don’t capture the full bill that will come due. They assume that government can raise taxes to pay off the debt without imposing any other costs on the economy. But we know that isn’t true. When the federal government decides to raise taxes — maybe it will be the Biden administration this year or another administration down the line — the taxpayer will be hit twice. Once when she writes the check to the IRS, and again when her boss, customers, suppliers, and everyone else she interacts with in the economy have to write their checks, too, and then spend and invest less. An old economic rule of thumb is that the actual cost of a dollar raised in taxes is about $1.50. With that rule, the average American owes about $40,000 because of the stimulus.

A sugar high might feel good while it lasts, but it doesn’t last long. The fiscal challenge created by the policies of the last year will be a massive weight for all of us going forward.

In the case of the British Islamist who took worshippers hostage at a Texas synagogue, it’s a distinction without a difference.
Kevin D. Williamson

MI5 identified the man as a 'subject of interest' over his suspected involvement in Islamic terrorism.
Brittany Bernstein