Assessing the historical record on government investment and growth.

Keynesian economics presents the promise that increases in government spending stimulate demand and thus investment, contributing to stronger economic growth. For the last 50 years, however, government spending has grown in most advanced economies, while investment and growth have shrunk.

Legendary Keynesian economist Paul Samuelson is reported to have been concerned that “if government gets too big, and too great a portion of the nation’s income passes through it, . . . government becomes inefficient and unresponsive.” Is it possible that advanced economies have passed Samuelson’s feared tipping point? Could government spending have reached the level at which it is now crowding out investment?

Traditional economic analysis views crowding out as a function of interest rates’ effect on investment. The chart below compares real after-inflation interest rates with the level of investment and illustrates that this relationship is weak and inconsistent, offering little with which to understand policy. 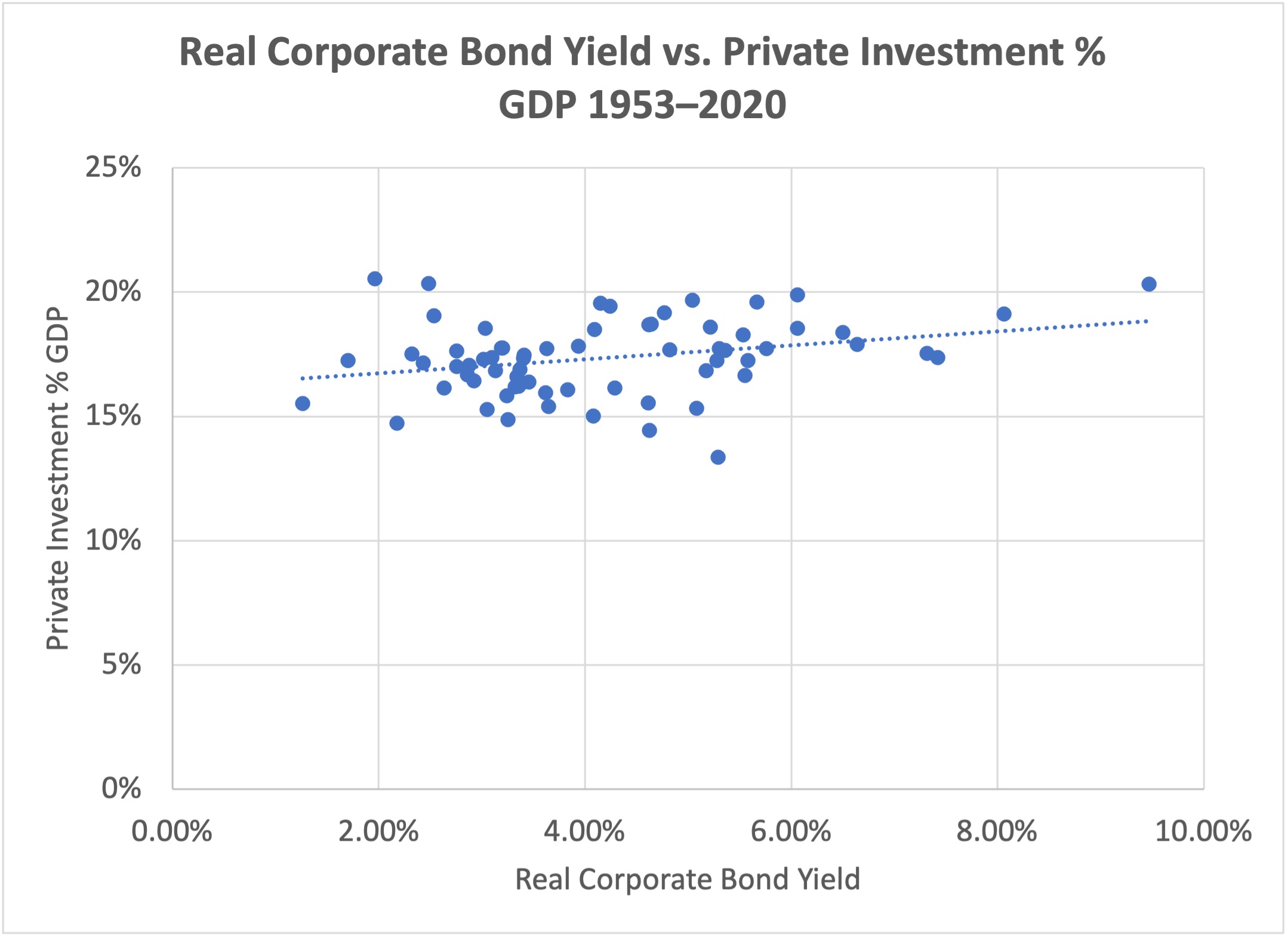 In fact, as interest rates rise, so too does investment, suggesting that the latter drives the former. Investment lifts rates in boom times, and depresses them in slumps. Some top economists conclude that “unfortunately, a huge literature has documented that [the investment–rates relationship] does not work well empirically.”

Alternatively, crowding can be assessed by looking at the economy as pie shares, with percentages of GDP for government spending and investment. The next chart does that for the period between 1953 and 1977, a time when much of Keynesian theory was developed. 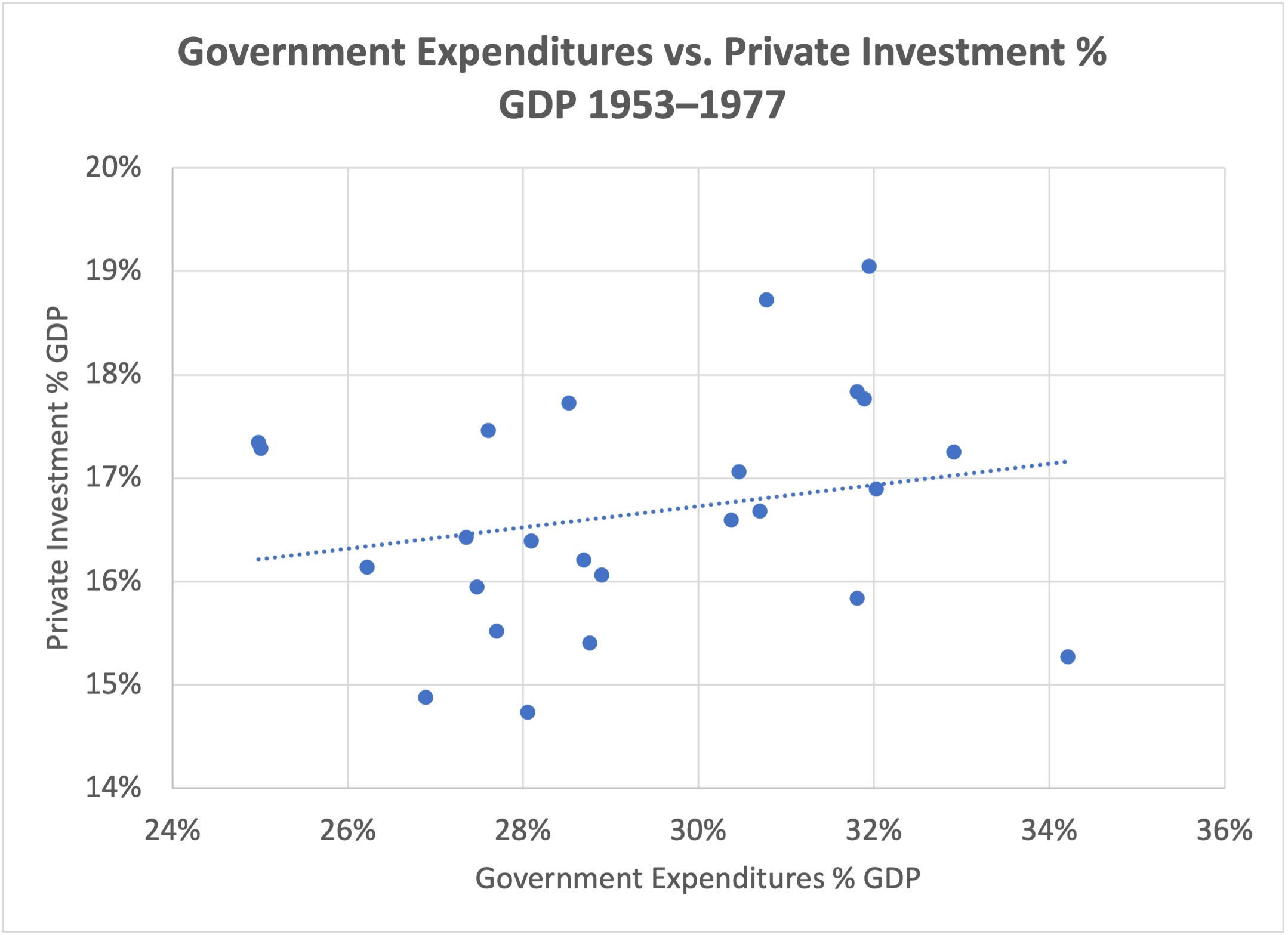 The chart’s relationship is weak but in a direction consistent with investment rising with government spending. Certainly, there is no crowding out in this period. Through the 1970s this relationship changed, though, as illustrated in the next chart, depicting the same relationship from 1977 onward. 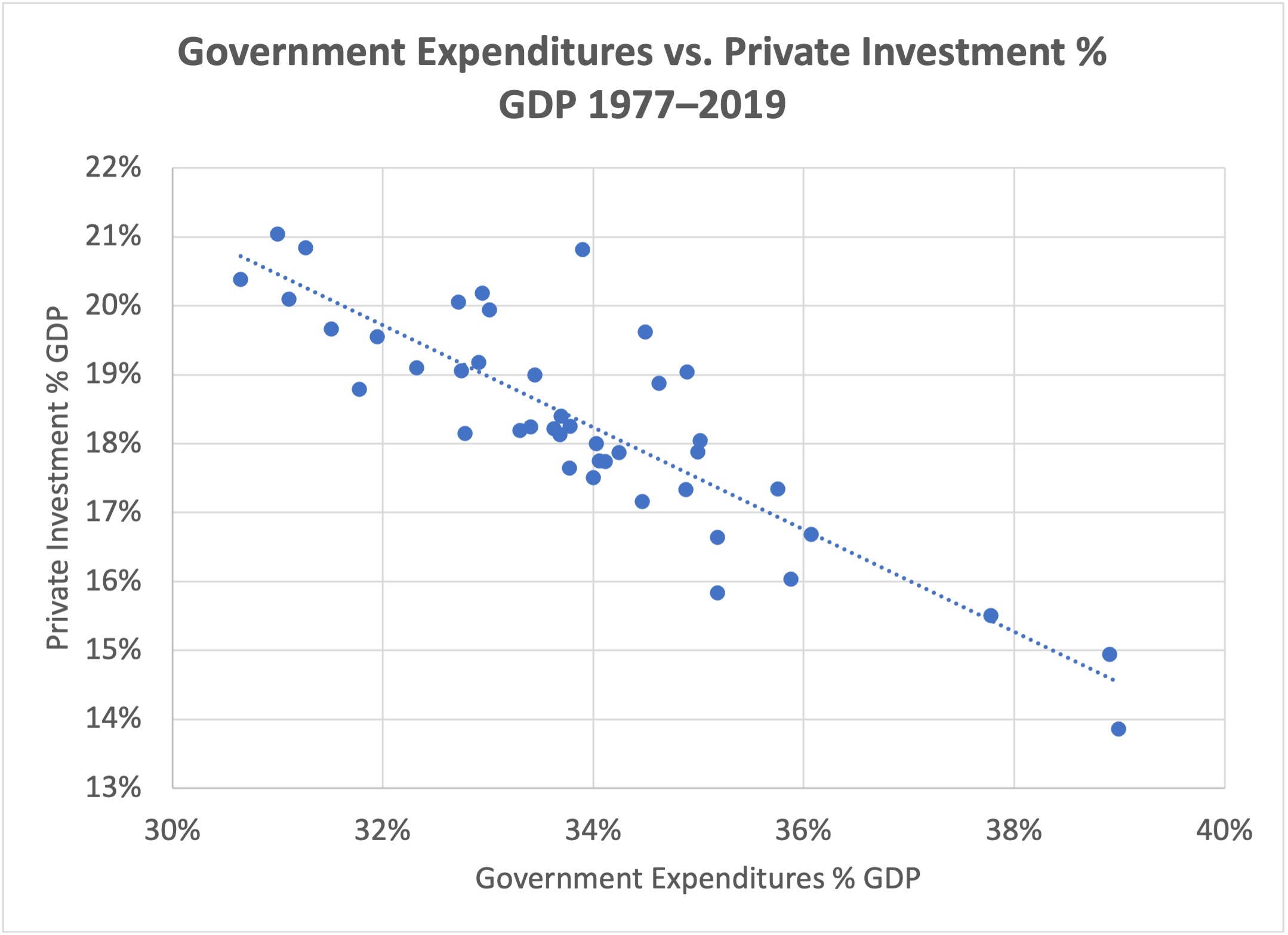 This chart dramatically reverses the previous one. There is a strong, negative relationship between government spending and investment, indicated by how closely the dots cluster around the line. This is what crowding out looks like.

Keynesian devotees will rush to contend that fluctuations in government spending and investment are cyclical, and they are right . . . to a point. There is a lot more going on than just the business cycle here. “Peace dividend” spending reductions following the end of the Cold War and budget agreements restraining spending between Republican Congresses and the Clinton and Obama administrations also significantly reduced spending and boosted investment and growth. Especially noteworthy is that, whether cyclical or secular, changes in government spending have the same effect on investment. If investment changes proportionately with the size of government, clearly the size of the private sector changes proportionately, too. So, as a share of its income, private-sector investment is relatively constant. 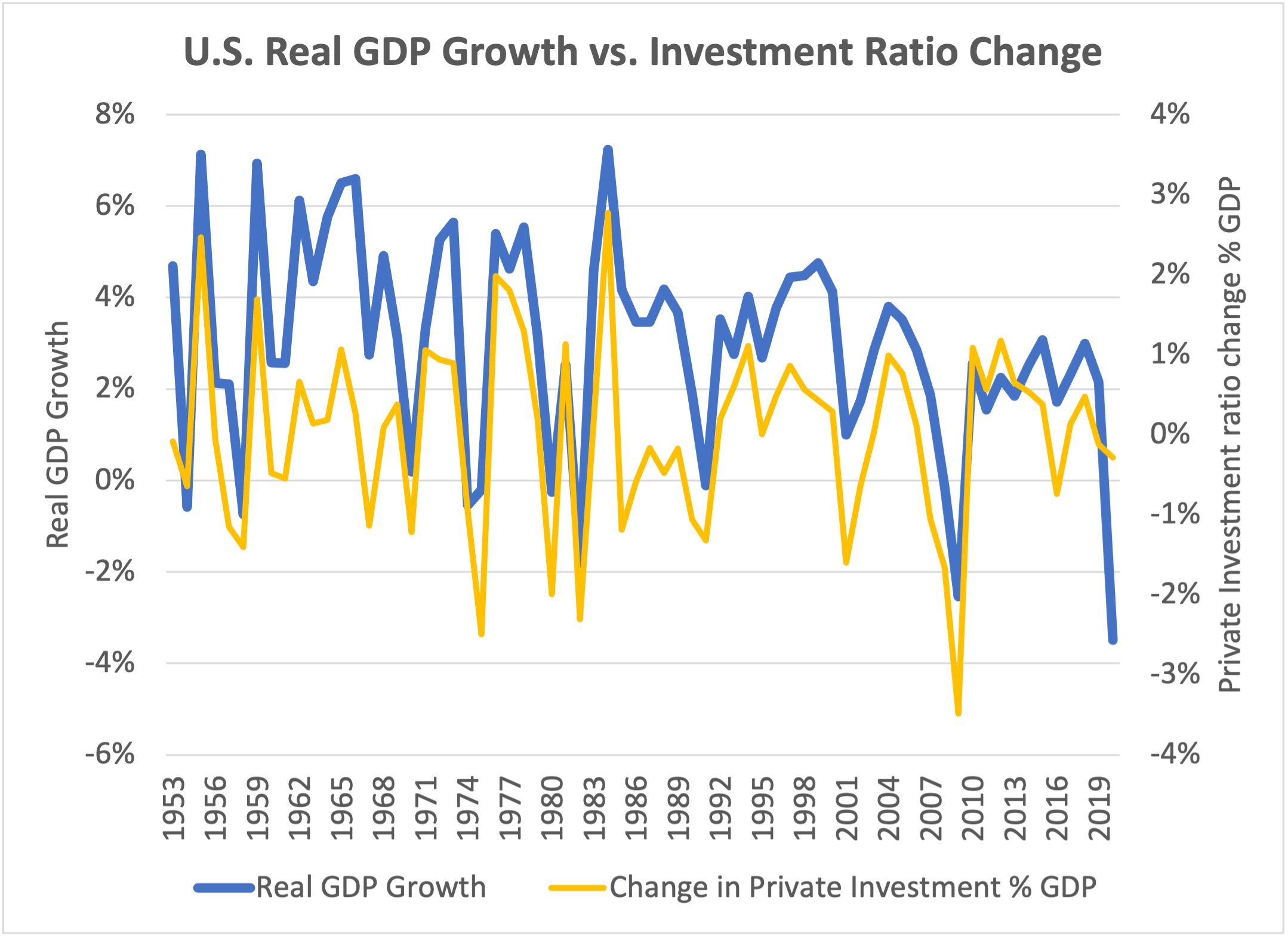 Changes in the ratio of private investment to GDP explain over two-thirds of the fluctuations in growth. Since the Korean War, almost every recession has been accompanied by a sharp decline in private-sector investment, representing an adjustment to imbalances in the economy.

The sole exception to this pattern is the recent pandemic recession in which investment and consumption shares changed only marginally. The U.S. economy shrank proportionately in the face of the pandemic rather than shifting in response to imbalances. This cycle’s uniqueness renders economic forecasting especially uncertain.

The negative effect of government spending upon growth also is evident in international comparisons. The following chart compares government spending and growth for OECD economies during the ten-year period between the Great Financial Crisis and the coronavirus pandemic. 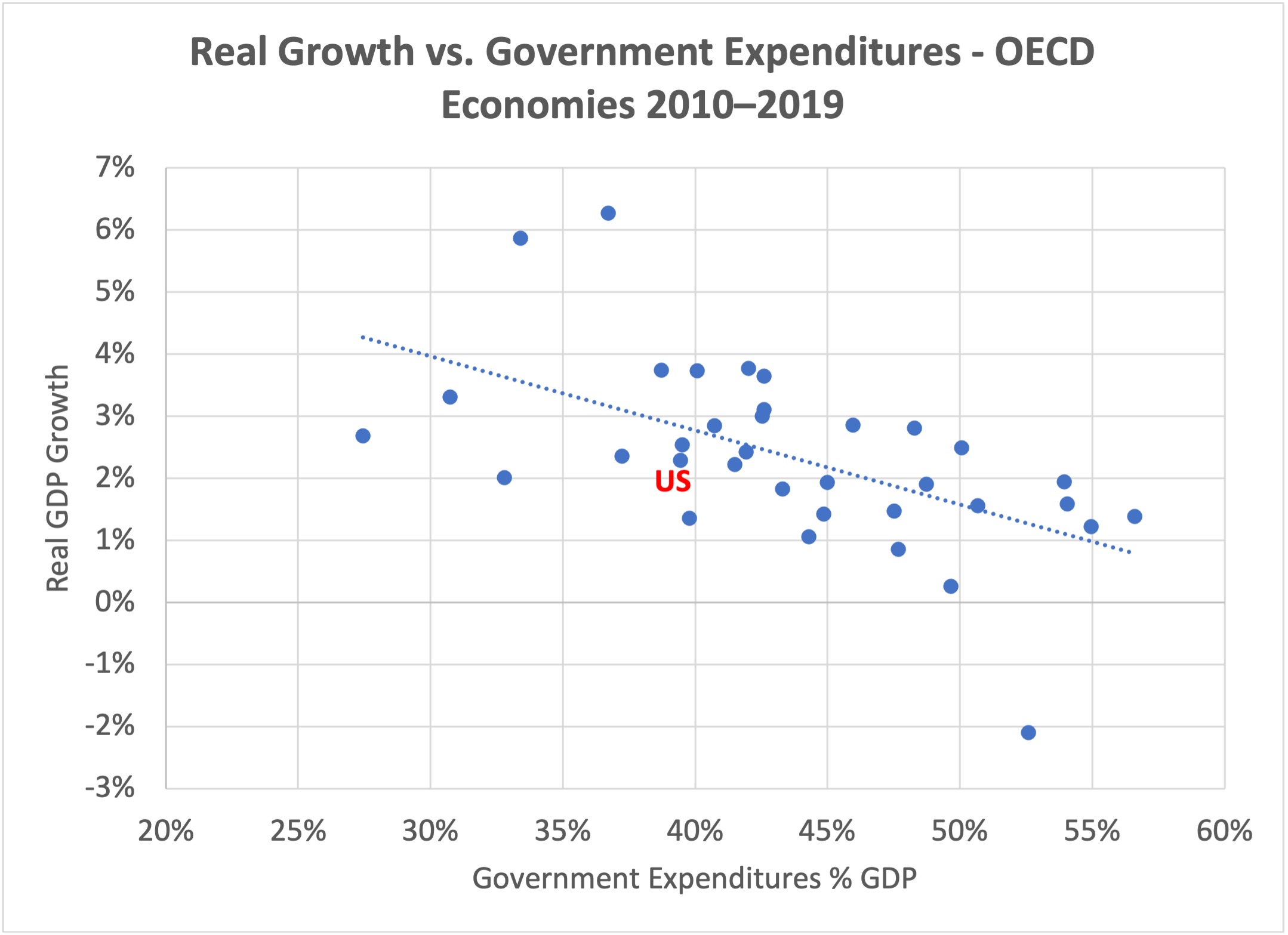 The same significant negative relationship between government spending and growth holds, with the ten-year average minimizing short-term cyclical effects. The seven economies with government spending lower than the U.S. all had higher growth rates. Of the 27 economies with spending greater than the U.S., only ten grew faster. Interestingly, all but one ran trade surpluses, which the U.S. certainly did not have. The ten big-spending, faster growers averaged government deficits of 1.8 percent of GDP compared to the United States’ 7.1 percent. These ten countries also invested on average 1 percent more of GDP than the U.S.

The most recent precedent for Biden’s Keynesian stimulus is Obama’s, which fell well short of economists’ Keynesian-influenced projections. In February 2009, a Philadelphia Fed survey of 43 professional forecasters found that real GDP was expected to grow 2.56 percent per year over the following ten years, which was 0.4 percent above the rate actually achieved during Obama’s last six years. In an edition published in February 2021, the same survey projected real GDP growth of 2.25 percent. A similar shortfall would produce 1.85 percent growth, which, from an American perspective, looks like secular stagnation.

Many Keynesian economists believe that Obama’s stimulus was too small to be effective. No one claims that about what is now under way. Bidenomics should be the ultimate, no excuses, Keynesian test. As noted, it is difficult to distinguish the policy influence on this unique recovery. The U.S. economy’s 17.8 percent annualized recovery to date should have plenty more to go, but, over the long-term, in the collision between unprecedented spending and private investment, historical data indicate that stagnation will prevail.