Moving the mound back was practically an extinction-level event for pitchers age 30 and up. Is it wise to do it again?

One of the baseball rules changes being tested this year in the independent Atlantic League is moving the pitcher’s mound back by a foot. The idea is to increase offense, and specifically to reduce strikeouts by reducing the ever-increasing velocity of pitches. The mound has been 60 feet, six inches since 1893. We might learn from what happened the last time the mound was moved back.

Until 1892, the pitcher’s box — it was not then a raised mound with a rubber, but a box like the batter’s box — ended 50 feet from home plate. Changing the distance did not move it back a full ten feet, because the rules also changed where the pitcher stood, from having to release the ball by the front of the box to having to stand on the rubber. Still, it was a significant increase in the distance between the pitcher and the plate. This was the last of several changes to the pitching distance, pitching motions, and number of balls and strikes that were made in the 19th century (the count was set at four balls and three strikes only in 1889). The only major change in several decades after that was calling foul balls a strike, which was made uniform across both leagues beginning in 1903.

What is perhaps slightly less well-known is that the pain for pitchers was not evenly distributed. Moving the mound back was practically an extinction-level event for pitchers age 30 and up.

Now, it’s important to understand that the game was different then. Starting pitchers typically entered the league in their teens or early 20s and immediately commenced throwing 400 innings a year, so very few pitchers lasted far past 30. The game also contracted; after a third league was tried in 1890, the second league (the American Association) folded after the 1891 season, leaving National League the last one standing and dropping the total number of franchises from 17 to twelve.

Even so, the results were pretty grim. Using the BaseballReference.com search tools, take a look at the number of pitchers age 30 and up qualifying for the ERA title each year between 1889 and 1899, and their average performance by ERA+ (park-adjusted a measure of a pitcher compared with the league ERA, with 100 being average and above that being better than average): 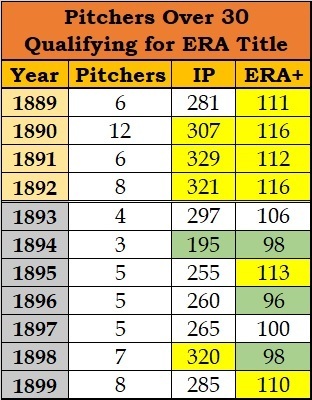 These pitchers tended, as a group, to be above-average pitchers, men who had lasted in the big leagues for some years. Their number contracted somewhat as the number of rotation jobs declined with fewer teams from 1890 to 1892, but their performance did not fall off. By contrast, the drop-off in 1893 was followed by a further, catastrophic drop in 1894, and it was not until the end of the decade, when the last of the pre-1893 veterans were all gone, that older pitchers recovered to pre-1893 levels. (Cy Young, who was 25 in 1892, turned 30 in 1897.)

Consider some individual cases among pitchers who had been successful past age 30 before the mound moved. While some of them remained effective, they were not the same as before:

Veteran pitchers typically have lost some velocity, but can compensate for that by experience — i.e., better command and control of the strike zone, knowing how to locate and change speeds and mix in breaking pitches. Lengthening the mound distance not only makes lost velocity more apparent, it robs pitchers of the benefits of that experience, casting everyone into a new world requiring more adjustments. It is unsurprising that this would land hardest on the veterans. We may not see that directly in the Atlantic League, which has fewer grizzled vets than the majors, but if the big leagues tamper with the distance to home plate, we should expect older pitchers to be disproportionately hard hit.

USA Gymnastics said Biles withdrew because of a mental-health issue, in a statement to reporters.
Zachary Evans

Ellzey won with just over 53 percent of the vote on Tuesday, with Wright taking 46.7 percent.
Zachary Evans

Time to Withdraw from the U.N. Refugee Treaty

The Cold War anachronism is today being used by the American Left to pry open our borders.
Mark Krikorian

It has become common to try to enhance the reputation of scientists by calling things ‘science’ that are just nature.
Michael Brendan Dougherty